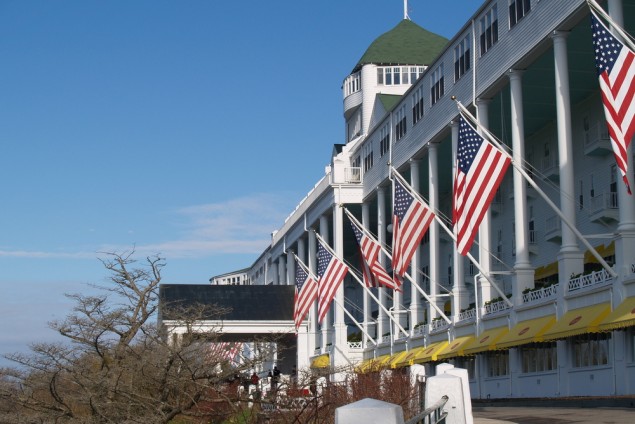 Flags wave on from the Grand Hotel’s Front Porch, the world’s longest porch.

It’s impossible not to tramp on the geraniums when staying at Michigan’s aptly named Grand Hotel on Lake Huron’s Mackinac Island. Brash-red geraniums, on a background as green as a well-kept lawn, are the theme of the seeming acres of carpeting in the hotel’s main parlor.

The carpet geraniums echo the parade of potted geraniums on the hotel’s 660-foot-long Front Porch – the world’s longest porch. It takes a lot of geraniums to parade the length of the porch’s banister – 2,500 in 260 planting boxes filled with seven tons of soil. Three thousand more are planted in the ground. 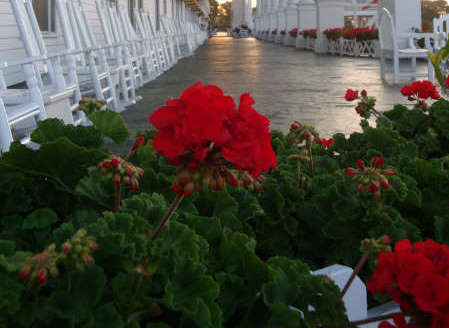 Geraniums entered as the hotel’s theme in the 1920s and never left, making their way past the porch into the hotel’s interior –pink and white potted geraniums here – eventually even landing in the bathrooms of the 368-room hotel in the form of essence of geranium bottled into shampoos, lotion, soap, and bath salts.

Deadheading geraniums an every morning task …

It’s a relief to Julia Viel, Grand Hotel’s head gardener, that the geranium presence in the bathrooms do not have to be deadheaded. Making certain that all of the potted and planted geraniums are without a trace of a faded bloom is a daily, early-morning task. Especially so, since geraniums are only for starters in the hotel’s horticultural scheme.

Century-old lilacs and equally old white cedars and maples provide dramatic structure to the landscape, perennials and annuals by the tens of thousands provide bursts of color during the May through October season.

Over 150 varieties of flowers greet guests …

“During any one visit, guests can see over 150 varieties of flowers,” Julia told me when I came across her moving pots outside the hotel greenhouse. “Even when everything is planted, between watering and deadheading and weeding it’s hard to keep up with 15 separate flowering areas and some 150 hanging pots.”

Julia, with her blond hair pulled back into a bouncing ponytail looks more teenager than of the age to carry the title Garden Foreman. In fact, she is entering her seventh year at the hotel, following a degree in horticulture and applied biology from Ferris State University in Big Rapids, Michigan. 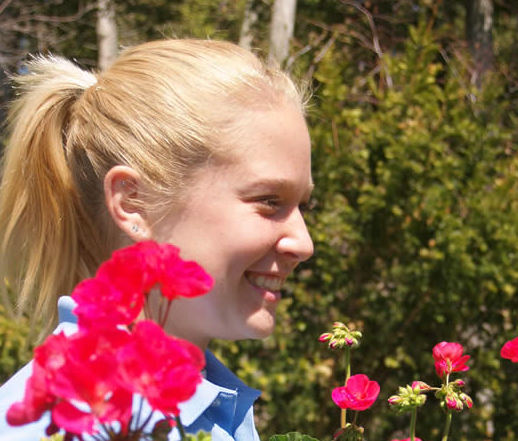 On this spring day, the trumpeting heads of daffodils fill large swaths along the woodland path below the hotel. “We plant 2,500 daffodils a year, adding new varieties to stagger the show.” Julia says. Hyacinth, anemones, vinca in purple, pink, blue and white complement the daffodil profusion.

In June, tulips are the star. “Every year we plant 25,000 bulbs. And, yes, our bulbs do come from Holland – Holland, Michigan that is,” she adds with a laugh. The city of Holland, a determinedly Dutch outpost of the Netherlands, is noted for its annual tulip festival and tulip- growing fields, “We source ours from Veldheer Farms, a Holland family-owned operation in its 78th year.”

And what happens with all those 25,000 bulbs when flowering is over? “We dig them up and throw them away,” Julia says. “ It makes a big heap next to our compost pile. By the end of the day, like magic, they’re gone!”

Thinking of the compost pile, I comment on the unlimited supply of composted horse manure that must be produced on the island. Clip-clop equals geraniums as a Grand Hotel trademark. 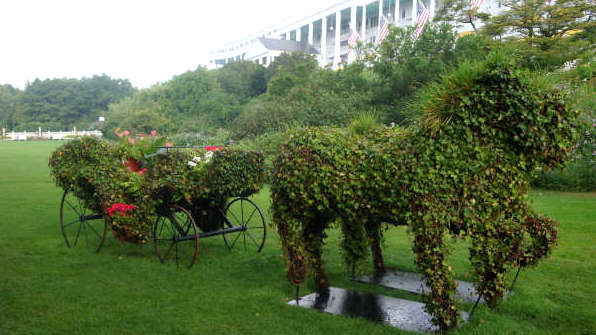 Early in the 20th century, automobiles began to find their way to Mackinac. A law was passed supporting an island-wide ban, but not strictly enforced until the 1930s. Since then, picturesque horse-drawn carriages by the dozens ferry visitors and locals about. Counting saddle horses and drive-your-own-buggy rental horses it adds up to a grand total of over 500 horses producing their inevitable by product. “Fortunately our soil is limestone,” Julia tells me. “Pits are dug and dumped manure turns to compost quickly. Most goes to keeping the golf course green.”

And a good thing. Julia, with the aid of the seven gardeners on her staff, has all she can handle dealing with the daily mountain of deadheaded geranium blossoms, shrub clippings, and spent flowers from the 120 varieties of annuals that are shoveled daily into the greenhouse compost pile. Oh yes, don’t forget the hotel’s coffee grounds – not an insignificant composting addition when considering that 130,000 hotel guests each season down coffee with abandon during their stay, not to mention the thousands arriving via clip-clop with reservations to dine in the Grand’s smorgasbord of eating venues.

One question I neglected to ask of Julia: “What happens to the 2,500 geranium plants on the Front Porch when the end of the season rolls around?” No matter. I think I know. I suspect a red-geranium mountain appears next to the compost pile and that, like magic, at the end of the day every geranium will have disappeared. 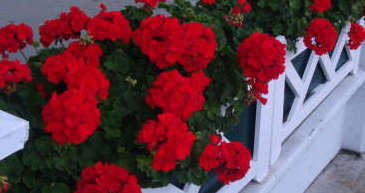 Mackinac Island can only be reached by ferry from Mackinac City. (Note that “Mackinac” is pronounced “Mackinaw” as in the city’s name.) Two companies operate April 30 – October 31. For schedules and rates: Sheplers Ferrry, www.sheplersferry.com and Mackinac Ferry, www.mackinacferry.com. No automotive traffic is allowed on the island. For information about the Grand Hotel,www.grandhotel.com. Mackinac Island tourist information at www.mackinacisland.org.