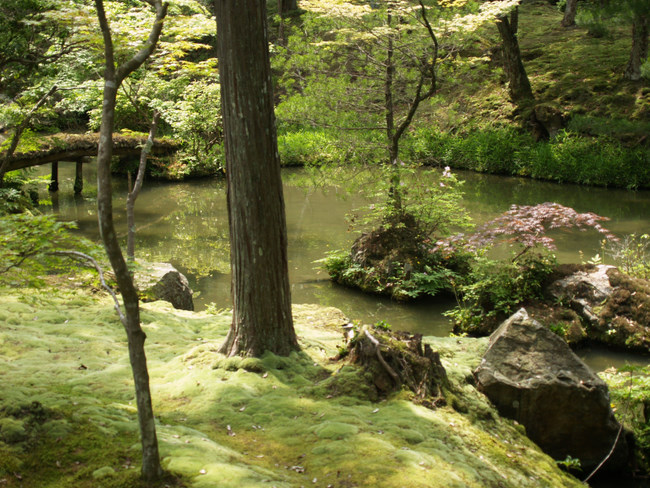 A garden rare for it’s time …

JAPAN Kyoto – Moss gone amuck was not intended to be the garden’s definitive element when Muso Soseki, a 14th century Zen priest and famed garden designer, created the gardens surrounding Saiho-ji temple. That would come centuries later, muffling a design rare and original for its time – a garden intended to be enjoyed for its idealized earthly beauty, not as a religious exercise.

Paths invited pleasurable strolling; small, flat-bottomed boats took visitors to three islands floating in its centerpiece heart-shaped pond. During cherry blossom time, the then emperor – who seven times was to honor Muso with the rare title kokushi, national teacher – was oft seen night-boating, his way lit by 10 tall candles. “It is delusion,” Muso wrote, “to think that the pure world of paradise and the profane world of the present are different.”

For 600 years the priests of Saiho-ji did their best to maintain Muso’s masterpiece, even as the 15th century introduced the wars, fires and floods that spelled the beginning of the end to the garden’s original state.

Time and events took their toll …

By mid-19th century, with but one monk assigned to its care, Muso’s garden was a wreck. Trees, once meticulously pruned leaf by leaf, needle by needle to reveal graceful lines and twisted shapes, grew rampant. In unharnessed shade, Kyoto’s wet and humidity had its way. 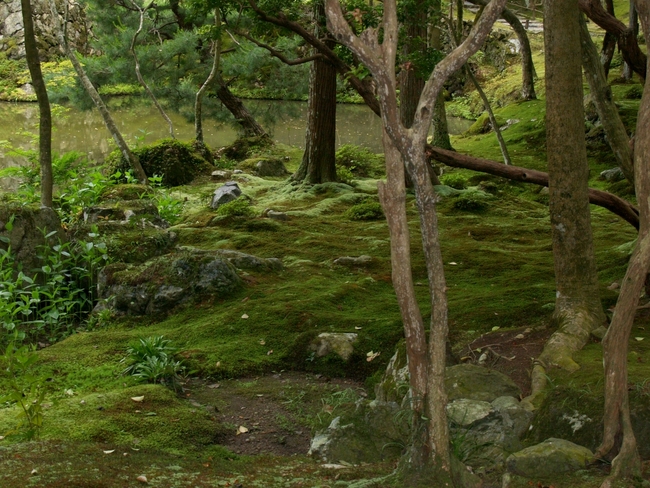 Fumes from hundreds of tour buses began to affect the moss; thousands of feet pulverized sections of the garden’s velvety softness. If the garden was to survive, drastic changes had to be made. Strict rules for access, and only at specific times, were put in place. 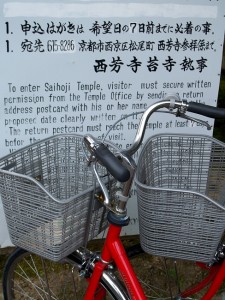 So it was that I entered Saiho-ji’s gates with a permit in hand, one I’d applied for in advance. In my pocket, I’d put aside an entry fee of 3,000 yen (approximately $29), at least five times that asked for at any other of Kyoto’s temples. I also knew that before I could wander the garden, I’d be required to participate in a Zen contemplative experience.

Inside the temple, shoes abandoned at the door, I bent my body into the position so easily assumed by everyone around me to kneel in front of an inches-high desk. The assignment was o trace a series of Japanese characters on a double-sheeted piece of paper. Two hundred and seventy-eight characters, to be exact, making up a sutra, a narrative dialog from the teaching of Buddha.

Shifting my weight surreptitiously from hip to hip, I dipped a bamboo brush into black ink and focused on capturing each delicate stroke, praying that Zen calm would supercede my hollering knees. When I had barely a third traced, an English-speaking monk approached to whisper a reprieve. Instead of finishing, I could instead write my name on the paper along with a wish and place it in front of the shrine.

Meandering through endless variations of green … 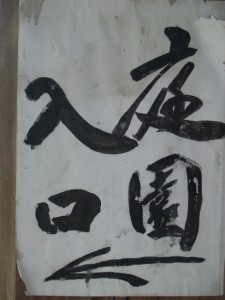 I was now free to enter the garden’s cushioned quiet. Meandering pathways circled past two tea ceremony houses while echoing the curve of a meandering stream. Each turn revealed yet another seemingly endless variation on the theme of green: humped moss, climbing moss, moss-padded bridges, moss-encircled tree trunks, rocks turned into pillows of moss, moss-stained stone lanterns. Moss carpeted the banks of the central pond, in which I fully expected to see moss-covered koi swimming in the moss-reflected water.

A total of 123 varieties of moss have been identified in the garden, with the variety called sugigoke most abundant, a moss prized for its long, velvety growth.

Moss-slippery, irregular, stone steps led through a kojokan – a gate symbolizing a barrier to be past before reaching one’s noble ambition – into the upper “dry” garden, representing the beauty of nature without the use of water. Here, a small temple built by Muso overlooked the lower garden.

Nearby, a dry waterfall of enormous rocks tumbled out of the hillside; an artificial composition, yet, following the dictates of a classic Japanese garden, giving the appearance that it was nature’s doing and could not have been otherwise.

In the distance, Mt. Torigatake appeared as one with the garden, deliberately integrated to appear as an almost touchable backdrop, following yet another classic design principle – everything within sight of the garden is the garden.

Best times for a visit …

The most popular time to visit Koke-dera, as with all of Japan’s gardens, is cherry blossom time in April. November brings the next number of requests, when autumn introduces earthy reds and oranges to the all-encompassing green. 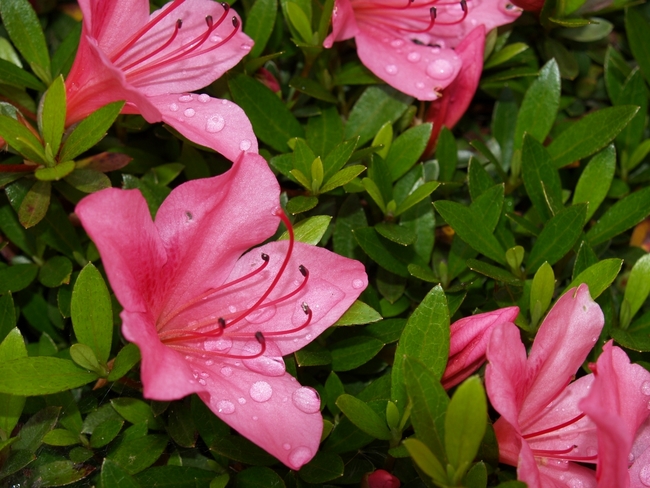 My visit was in early June, the month that brings with it weeks of unrelenting rain. A drizzle, the rainy season’s first just two days before, had already added fresh lushness to the landscape giving credence to those who insist that June’s misty weeks reveal Koke-dera at its best. 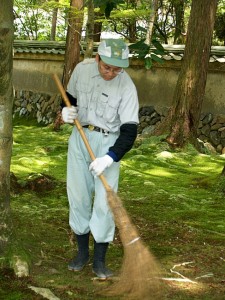 Saiho-ji temple is located in Kyoto’s rural, southwestern outskirts, a forty-five minute city bus ride from the city’s center. At the bus’ end-of-the-line stop, the garden’s gates are but a five-minute walk away on a quiet lane bordering the tree-shaded Saiho-ji River. A Zen immersion awaits. My best guess as to its meaning: accidental beauty reduced to a single element.