Persian Gardens – of myth and literature

Persian Gardens – of myth and literature 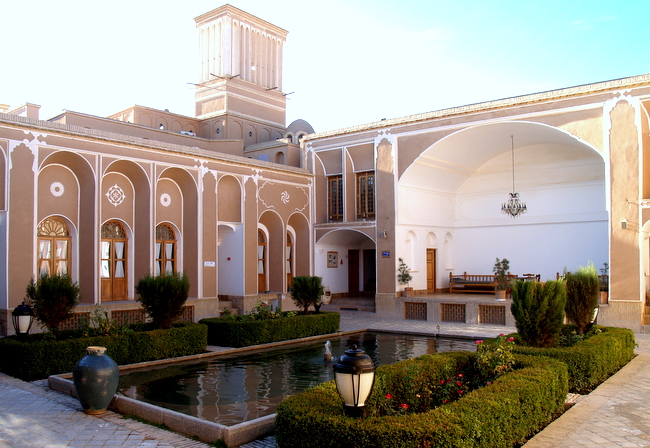 IRAN – Ah, the gardens of Iran. Pictured in my mind’s eye were the celestial paradises of the Koran in which flowers bloom, fruit ripens, and man and beasts live in harmony. I pictured the romantic gardens of Persian poets – “The rose has flushed red, the bud has burst, and drunk with joy is the nightingale,” wrote the 14th century poet Hafez.

Pictured, too, were mental images of the royal pleasure gardens of the 17th-century Safavids, along with the enclosed, designed-to-impress gardens of 18th and 19th-century merchants. Hoped for , as I planned my trip to Iran, was the possibility of visiting the descendants, or remnants, of all.

I arrived in Tehran, with two days on my own before joining ElderTreks, a Toronto-based adventure travel operator, on a three-week journey through the country . With time to spare, I made my way to the city’s Carpet Museum that includes in its collection extraordinary examples of carpet artistry dating from the 16th century through the present, many woven on the theme of gardens.

I viewed interpretations of flower-filled poetry gardens and stylized carpets with their design built on the geometric quadrant of water channels, a frequent element in a traditional Persian garden. An 18th century carpet was so detailed that a fish was included in one of the channels. All graphically illustrated the primal place gardens have held in the hearts of Iranians through the centuries.

A visit to Pasargadae …

Persian gardens of myth and literature existed long before Cyrus the Great, founder of the Achaemenid Empire, incorporated gardens into his 550 BC capital, Pasargadae. We visited Pasargadae on a day that demonstrated one of Iran’s harsh climatic extremes; a bitter wind blew through the open plain on which Cyrus built his city.

We walked through ruins where gardens once served as places not only of respite and beauty but also of shade from searing sun and protection from the freezing wind we experienced this day.

Pasargadae took more than a squint of the eyes to imagine its gardens in the time of Cyrus the Great. True throughout my visit, most gardens only hinted at their former glories.

En route to Yazd, an oasis in the middle of miles of desert, we stopped at Naeen where Pirnia House, once the home of a wealthy carpet merchant, now serves as the city museum.

The house was constructed around a large courtyard garden, its sunken section gone amok with weeds and untended shrubs and trees. An upper section held a garden-edged waterway, now empty and cracked.

It had been an exquisite garden, and the form remained, but where was the care? My garden-itchy fingers longed to pitch in and return it to what it had been. Cash- strapped the museum might be, but in this town of some 70,000 souls, was there not a gardening person inclined to enlist an army of volunteers? 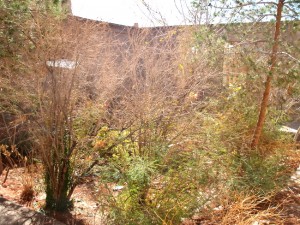 Continuing to Yazd, one of the hottest places in Iran, we stopped byBagh-e-Doulatabad, an 18th century garden divided into a ceremonial reception area and private space with a long waterway creating an avenue between. 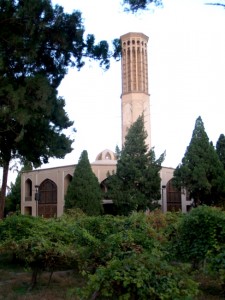 As elsewhere throughout the country’s high desert, water is delivered to the garden via ganats. A gantat ,a Persian invention that began around 2000BC, is a deep well from which tunnels, some running as long as 25 miles contribute to a system of more than 100,000 miles of water delivery.

Here, too, is a fine example of a badgir (wind tower). Badgirs, of which there are a multitude of working examples throughout the area, are tall “air conditioning” structures intricately designed to capture the breeze and carry it downward to ground floor and underground chambers of water.

The pool in Bagh-e-Doulatabad’s summer pavilion’s interior shivers in breezes funneled by its magnificent badgir as it reflects the myriad colors of the pavilion’s colored glass windows and lowers the interior’s temperature by at least 10 degrees.

Gardens of the Safavids ...

Another example of a summer pavilion awaited at Isfahan. Isfahan’s reputation as a garden city dates from the 10th century, reaching its zenith at the end of the 16th century when it became the capital of the Savadid dynasty.

The gardens of the Savadid’s, once settings for elaborate courtly receptions and festivities, are today  but shadows of those days. Some remain as tree-shaded city parks. One is Hasht Behest, the Palace of the Eight Paradises, its garden centered by an airy, octagonal pavilion. Delicate floral frescoes decorate its interior walls. A large pool in front of the eight-sided pavilion provides a mirror image of the graceful structure.

Wonderful it would have been to be invited to a royal festivity at Haht Behest during its glory days, and the garden is still a shady oasis to wander although obviously maintained for easy care.

The entirety of Shiraz appeared to be a garden as we approached the city via a mountain pass. Below, Shiraz presented itself as a sea of greenery punctuated with blue-tiled domes. Hafez was born here; no wonder he became an inspired poet.

We paid a visit to Bagh-e-Eram, Garden of Paradise, which today is Shiraz University’s Botanic Garden. Although it’s considered a 19th century garden – the ornate pavilion reflected in the pool and watercourse descending in terraces are mid-19th century – the architectural bones of its design indicate a much earlier era.

Plantings were diverse and lush. Roses were plentiful, as expected in a garden where, I was told, nightingales sing.

Hafez’s Tomb Garden is located in Shiraz. Pilgrims come – hundreds filled the garden when I was there –to choose at random page for omens from  a copy of Hafez’s collected works kept at his stone. Identical terracotta pots set in ranks flanking the entrance were filled with a seasonal display of geraniums.

No, I did not find the immaculately kept celestial paradises of the past on my visit to Iran. And, it was unrealistic to think that I might. Even so, I did wander some that retained the distinctive, Persian architectural designs portrayed in Tehran’s Carpet Museum.

Too, Iran holds many other gardens open to the public that I did not see, among them uncounted private gardens tucked behind sheltering clay walls where, today perhaps,  “the rose flushes red and drunk with joy is the nightingale.” 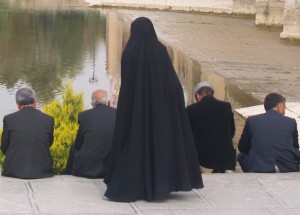