Alcatraz – the rock has bloomed for over 100 years

Alcatraz – the rock has bloomed for over 100 years 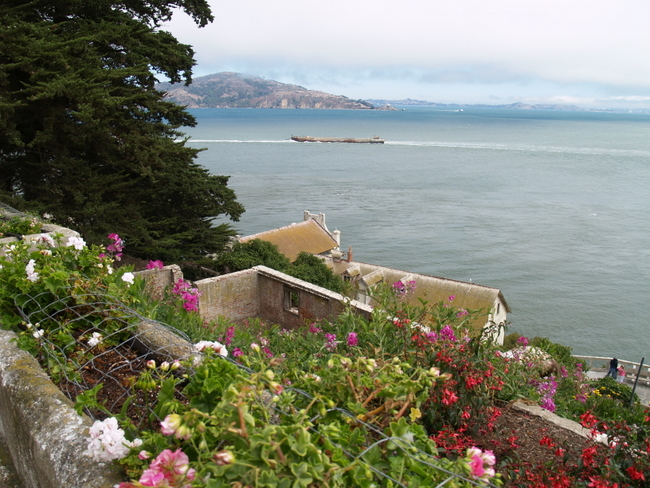 CALIFORNIA San Francisco –  Carola Ashford instructs a volunteer gardener, “Please defeather the iris.”  Trimming makes sense to me, for that is what one does when readying iris for the blooming season ahead. Defeathering, however, has me scratching my head. “Seagulls,” Carola Ashford explains. 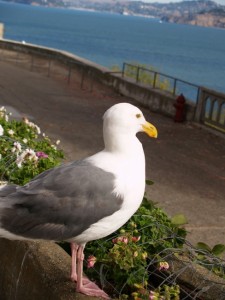 Alcatraz is, and has always been, a seagull Mecca – an island virtually adrift in baby seagull fluff during fledgling season. Brushing off the zillions of tiny feathers that threaten to wallpaper plants may be an only-on-Alcatraz gardening chore.

Early explorers described it as a rock painted white with guano. Today, it remains a haven for bird life – black-crowned night herons, great egrets, brown pelicans, mallards, western gulls, cormorants. And, a surprise to most of the some 1.3 million who annually visit the Rock in the Bay, a place where gardens have survived against all odds for more than 100 years.

The world offers no more of an unforgiving place to garden than this hunk of stone glowering through the Golden Gate. No soil, no water – such essentials had to be barged in. Yet since it was settled, whenever a pocket could be sculpted from the rock, something was planted, something non-utilitarian, something to brighten Alcatraz’ harsh wind-buffeted grayness.

Later, military prisoners gardened. A 1918 letter printed in the Alcatraz newsletter “The Rock” expressed amazement at the landscaping: “The visitor who comes here expects to find a barren rock, but as he strolls over it he is surprised to find roses in bloom, sweet peas, lilies, and a large variety of other flowers in all their beauty and fragrance.”

Even during Alcatraz’ infamous 30 years as a federal penitentiary, when its cell doors clanged shut on such “public enemies” as Al “Scarface” Capone, George “Machine Gun Kelly,” and “Birdman” Robert Stroud, inmates not run afoul of the rules were allowed to garden, their efforts softening The Rock’s hard psychological and physical edges.

Gardening came to an end in 1963 with the penitentiary’s closure. 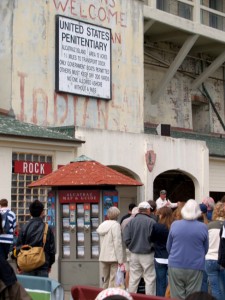 “For Sale” notification attracted no takers. In 1969, Native American activists laid claim to the island, leaving in the wake of their eighteen-month occupation ignored gardens and burned-out ruins.

Soon after, Alcatraz became part of Golden Gate National Recreation Area. Readying the island for public access, interpretation, and “arrested decay” maintenance of existing structures were the National Park Service’s immediate priorities, not the tending of the all-but-disappeared gardens. 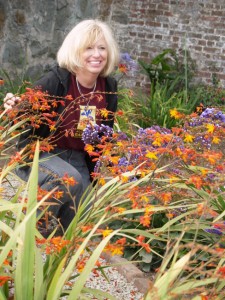 “Ivy and blackberry thickets as high as six feet!” Ashford recalls. “I took one look and thought, I can’t do this!”

Thanks to the efforts of volunteer gardeners, two of five significant gardens have been cleared and planted. A third is underway, a rose garden planted in 1929 below Main Road on a site where the island’s hospital once stood.

Allowing Alcatraz to bloom again began with what Ashford describes as ”the reeling in” of pictures and literature. Information came from surprising sources. “One family discovered a shoe box of photos while cleaning out the attic after a family members’ death,” she relates. “They had no idea he’d spent time in Alcatraz!”

Seed catalogs of the time were perused. Members of the Alcatraz Alumni Association, consisting of inmates and officers, were consulted. A treasure trove of garden photos was supplied by the daughter of Joseph Simpson, a prison guard and avid photographer who died in riots following an attempted May 1946 break out.

I walk up the Main Road from the ferry landing with Ashford toward the Sally Port, the protected entrance to fortress Alcatraz. A planted strip at roadside reflects 19th century efforts to beautify the military prison, restored in their original discipline military style. At the Sally Port entrance, a gnarled 90- year- old Australian tea tree stands guard.

A steep turn passes by a wall filled with white, pink and burgundy ivy geranium, as originally planted in the 1940s.

Steps lead down into Officer’s Row, the area with Alcatraz’ longest garden history. Here, on the wind-protected leeward side, in 1881 the army built three officer’s houses and surrounded them with terraced gardens. The Gothic-style houses are gone – two demolished by the Bureau of Prisons and one burned during the Native American occupation.

“We cleared out extensive overgrowth and discovered the outlines of paths and planting beds,” Ashford says. “Over there was a hot house. And look at this, a General MacArthur rose, an early hybrid named after General Douglas MacArthur’s father who was commander of all military institutions around the Bay.”

Continuing up the Main Road, the Warden’s House, built between 1919 and 1921 for the commander of the army, is now a shell, its ground floor a carpet of red valerian. Gardens once flourished on three sides of the structure; a green house claimed the south side.

Much of the plantings can be attributed to Freddie Reichel, secretary to the warden from 1934 to 1941. An inexperienced gardener, he found respite from his duties working the earth and in doing so became an expert self-taught horticulturist. He planted succulents, ice plants, and tough bulbs, along with successful candidates from the Mediterranean and South Africa into the gardens. Reichel also persuaded the warden to allow prisoners to garden. One of those inmates was incarcerated counterfeiter Elliott Michener.

Michener’s extraordinary garden efforts took place on the island’s blustery windward side. First assigned to the site to retrieve handballs that soared over the recreation yard fence, he began to dig about – later admitting that he did so to investigate ways to escape. Soon he was spending seven-hour days seven days a week turning barren space into a terraced garden bursting with color. Fruit trees that he planted survive today – apple, peach, walnut, fig.

Old windows removed from the cell house became a greenhouse; from odds and ends he created a birdbath. Inmates on their way to work in the Industrial Building picked flowers, sacrificing their drinking glasses and enduring the snickers of fellow prisoners to brighten their cells with small bouquets. “When Michener was given the opportunity to move to far less notorious and severe Leavenworth to complete his ten-year sentence, he refused,” Ashford tells me. “He didn’t want to leave his garden.”