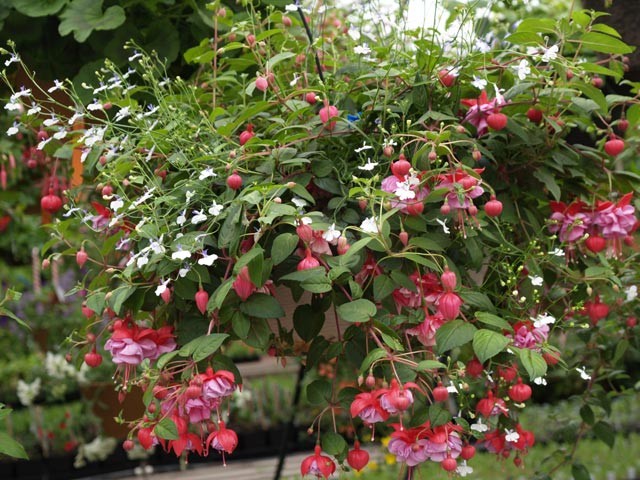 ALASKA Anchorage –  It’s not easy to have a green thumb when you live in Alaska. The garden just gets going and whammo it’s winter, with its near 24-hour nights. There’s no gentle spring to gradually warm the soil, no lingering days of Indian summer to coax one last bloom out of the bush. Frosts have been known to frizzle the fuchsias on the first of August.

With that, down come the hanging baskets – Anchorage refers to itself as “the hanging basket capital of the world, with no apologies to Victoria, B.C. which makes the same claim – to be loaded into station wagons, pickup trucks, the backseats of family sedans and hauled off to Bell’s Nursery for the winter.

“Winteriizing,” Bell’s calls its horticultural version of taking off for Hawaii. At the nursery, vacationing under lights and glass during Alaska’s season of dark days , were 5,800 hanging baskets, most containing fuchsias; 900 tubs, again mostly fuchsias; and 500 or so fuchsia trees. 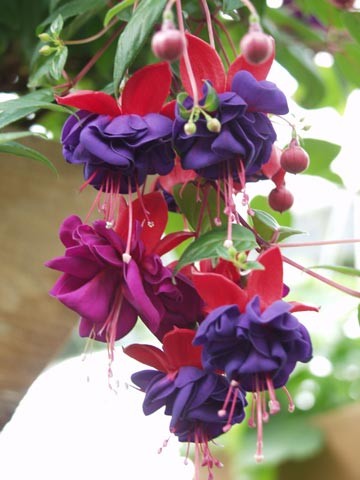 “Tree fuchsias live forever,” commented nursery horticulturist Steph Daniels as she pointed out a fuchsia giant that the nursery permanently inherited from an elderly customer who could no longer wrestle it into her car for its annual winter sojourn.

A miscellanea of other winter-tender plants accompany the fuchsia parade, a curly willow here, a couple of wisteria there.

Barbara Weinig has been sending her hanging baskets and tubs to “winter camp,” as she calls it, as long as the nursery has been in existence. This year she hauled in 100 plants. “I have a big yard,” she explains. “When I pick up my plants, several van loads, I have an instant garden.”

Weinig spends a lot of time at Bell’s during the winter, checking up on her plants and wandering about giving solicited and unsolicited advise to the customers. “Barbara doesn’t have a green thumb,” says Daniels, “she has a jungle thumb!”

Most incoming hanging baskets could use a bit of Weinig’s expertise. “Very few are brought to us in good shape,” Daniels continues. “One time I overheard Barbara asking, ‘Did you think to feed and water it at all over the summer? ’”

No matter if a plant appears to have spent the summer on a hard trip up the Yukon, Bell’s will not turn it down. “We always try,” Daniels says. “If it doesn’t survive, we replace it with the closest thing. We want our customers to be happy.”

Once admitted to the greenhouse the coddling begins with an initial cutting back to the container’s edge. Pinching continues throughout the winter along with regular feeding, watering, and inspection for insects and weeds. As summer approaches, a final grooming brings each plant to perfection. 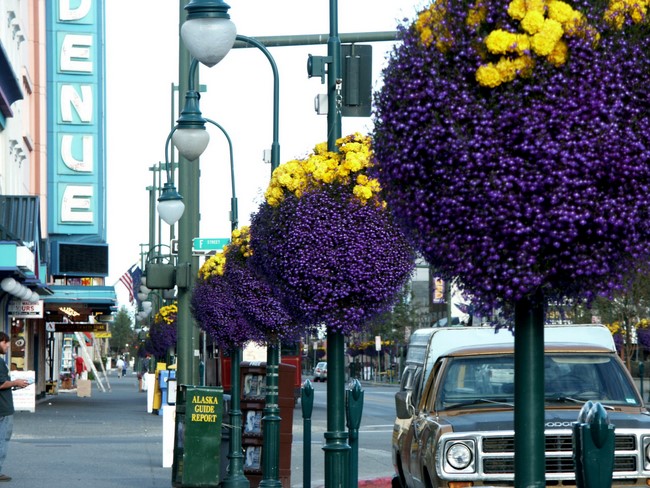 At Bell’s, the traditional time to haul baskets back home is Memorial Day weekend. “The parking lot becomes a traffic jam,” Daniels relates, “with a crowd of cars, trucks and vans out on the street waiting to get in.”

Inside, the nursery’s enormous retail space is a bright canopy of cascading there-for-the-winter fuchsias augmented by 5,000 newly planted baskets. Ivy geraniums and tuberous begonias share hanging space with all manner of mixed and matched trailing combinations. Daniels, who says that her true love is in creating baskets – “taking little snips and starts of this and that and seeing them get bigger and bigger” – always tries to tuck in two of her favorites, riotously colorful nemesia and the rich salmon to coral pink cluster of diascia. Surrounded by a horticultural display that takes the breath away, nursery employees wearing green aprons reunite plants with their ecstatic owners.

Despite Bell’s coddling and care, however, a few customers have been known to burst into tears of disappointment, insisting that their basket is less lush, less colorful than when they brought it in. “There’s something about a long winter that does things to the mind’s eye,” sighs Daniels who has also been caught in the middle of fuchsia tug of-wars between divorcing couples: “You gave it to him! I was supposed to get it!”

For the most part, however, pick-up day is a joyous occasion. Compliments flit like hummingbirds through the flower-scented air. “Just look at your gorgeous ‘Texas Longhorn’! And they’re really picky!” The owner of the “Texas Longhorn” manages to look modest as she carefully positions her basket in the trunk of her car.

“I’d say that it is the memories of Anchorage’s flowering, cascading baskets that get a lot of folk through our cold, dark days of winter,” Daniels says. “The return of hanging baskets to the outdoors signifies that, at last, summer is here.”