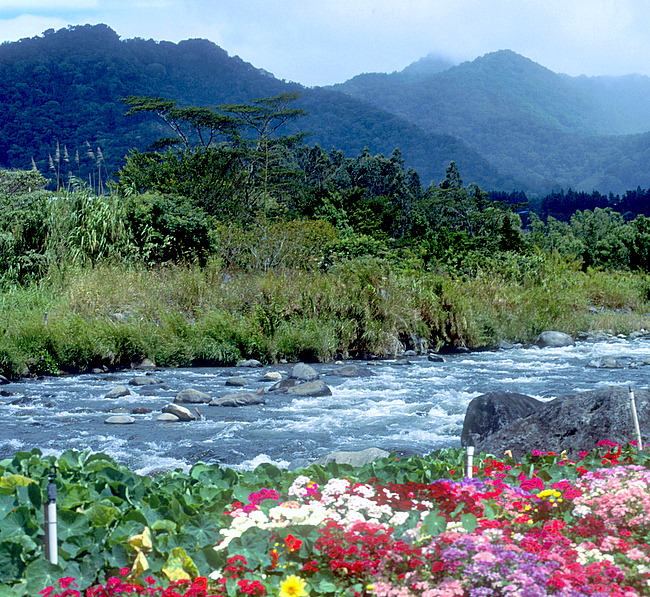 Boquete’s fairgrounds, held alongside  the sparkling Rio Caldera, is abundant with flowers during each January’s  Feria de la Flores.

Panama beyond the Panama Canal …

It has always bewildered me, the fascination people have with the Panama Canal. The water goes up, the ship goes through, the water goes down. Because “canal” and “Panama” seem hopelessly connected, a trip to Panama remained on my Z list – until I heard of Boquete.

In the cool highlands of Chiriqui province, an hour’s flight from Panama City, Boquete was described as a Shangri-La of tumbling streams, mountains clad in rain forest, abundant in orange groves and coffee plantations, with a picture-postcard town chockablock with flower gardens.

This idyllic place, I was told, is known best by Panama’s well-to-do looking to escape the low-land’s mugginess and mosquitoes. And, I privately suspected, the overwhelming and boring presence of the Canal. Panama leaped to my A list.

With that, I found myself driving a winding, two-lane road out of the hot, sticky and congested sprawl of David, the province’s capital. With every turn the air grew fresher, grass and trees greener. As the odometer clicked to 38 kilometers, a sudden descent led into a deep valley surrounded by craggy mountains. In its center, as promised, Boquete.

Not until later did I learn that “Boquete” does not translate to bouquet, as I’d assumed, but to hole. No matter. Boquete quickly revealed itself as one incredibly flowery hole.

Maintenance crews with machetes hacked away at colorful clouds of bougainvillea that threaten to take over the roads. Impatiens in every shade along with frothy flings of blue forget-me-nots blanketed hillsides. Aerial gardens of orchids, aroids, and bromeliads nestled in the high branches of trees. Lacy tree ferns towered; mosses muffled almost every available surface. 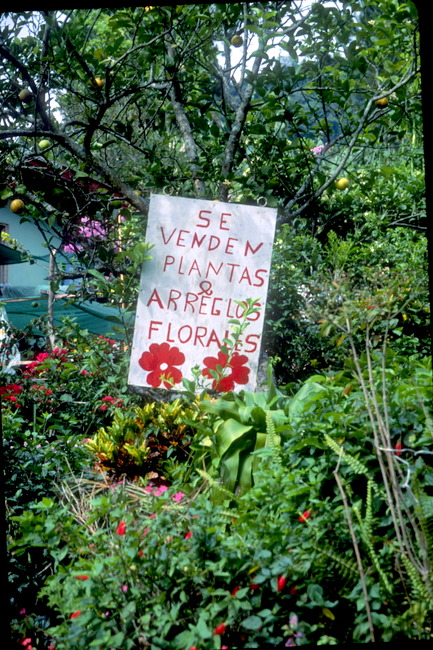 El Explorador, an open-air, family-run restaurant, introduced me to Boqueteans’ penchant for gilding the lily of their gardens with eccentricity. Behind a  cafeteria – where my halting Spanish delivered a tasty and chewy steak flanked by fried plantains instead of the cooling, fruit drink I’d envisioned – piped-in operatic arias encouraged the exploration of El Explorador’s lushly gardened hillside.

Along maze-like pathways, I passed gutted TV sets outfitted with bizarre dioramas that had nothing at all to do with flora and fauna. (One featured a miniature family watching a miniature TV; another a collection of tiny dinosaurs.) Bushes were sheared into improbable shapes, one trimmed to resemble a furry animal’s face – in its mouth, a doll. A shoe tree was exactly that, a straggly tree with footwear ranging from moldy sneakers to spangled, high-heeled slippers dangling from its branches.

Almost with relief, I spotted exit arrows and popped out of “Alice in Wonderland” Panamanian style.

Another day I visited Mi Jardin es Su Jardin (My Garden is Your Garden), a horticultural Eden surrounding a private estate on the outskirts of Boquete. As it name implies, visitors are warmly welcomed. Here the lily was embellished with what appeared to be dozens of escapees from a miniature golf course – little Dutch windmills, a blue cow, a Hansel and Gretel house, wee castles, along with cut-outs of children at play. 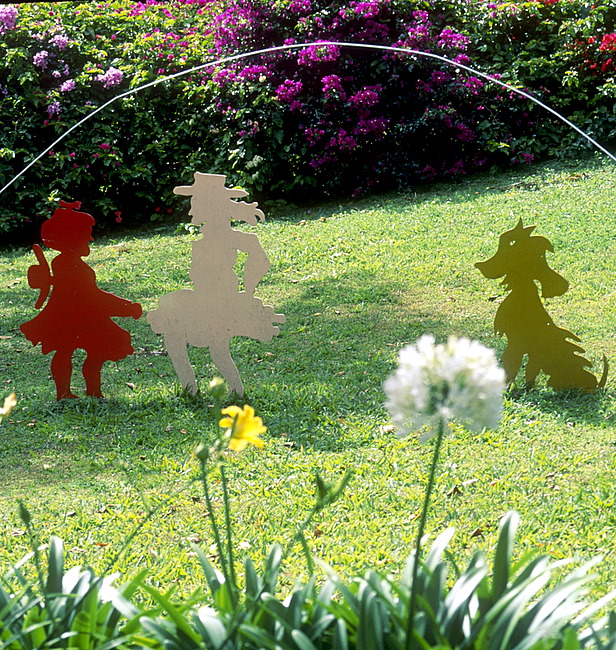 After that, it was no surprise to walk into the gardens of Boquete’s fairgrounds, where the town’s annual festival the Feria de la Flores y del Café (Fair of Flowers and Coffee) is held each January, and find brightly painted miniature lighthouses, multi-storied bird houses perched on tall poles, and park benches disguised as dragons. Beds of flowers familiar from garden stores at home – petunias, marigold, snapdragons, lobelia – were planted in brilliant abandon. Alongside stretched the sparkling Rio Caldera and across the river Boquete, with a church spire peeking through the trees. Beyond were rugged mountains, their tops adrift in clouds. 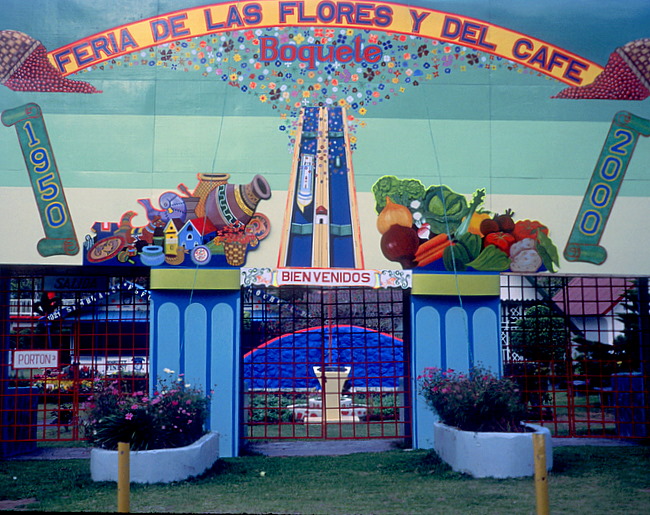 Colorful entrance to Boquetes fairgrounds where the town’s annual Fair of Flowers and Coffee is held.

A hike into the forest …

A guided day hike took me into the cloud forests of the Palo Alto Reserve. Within minutes of setting out, we encountered an obstacle – a washed-out bridge over a treacherously deep, rushing, boulder-strewn stream. While debating the options of embarking on a boot-soaking, knee-high wade or shimmying across on a downed tree, a trio of Panamanians in thigh-high rubber boots sloshed into the water, machetes swinging at their sides.

“Who are they?” I asked. “Orchid poachers,” my guide replied, explaining that while 30 percent of Panama’s land has been designated as national parks, preserves and refuges in an effort to protect the country’s diverse and abundant animal and plant life – including hundreds of rare orchid species – the areas are sadly understaffed, leaving them open to foragers. 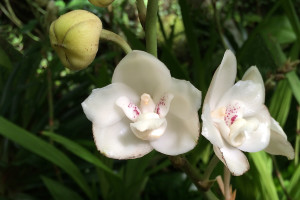 We chose boot soaking over a balancing act and our path took us into a world of infinite shades of green brightened with bright spikes of ginger, tree-clinging bromeliads and countless other flowering plants I’d considered the domain of florists’ shops.

Emerging from damp greenery, we entered a sunny clearing waving with gladioli gone wild and paved with out-of-control Shasta daisy. An abandoned cut-flower nursery, our guide explained as he dug daisy roots to take home to propagate. He, too, had a Se Venden Plantas sign hung on the fence of his garden in Boquete.

I wondered who the buyers were for the plantas rampantly for sale in Boquete. For, as idyllic as the area is, tourism has barely arrived. So it is that the town goes about its everyday business, making walking down its one main street and around its central plaza a people-watching delight. 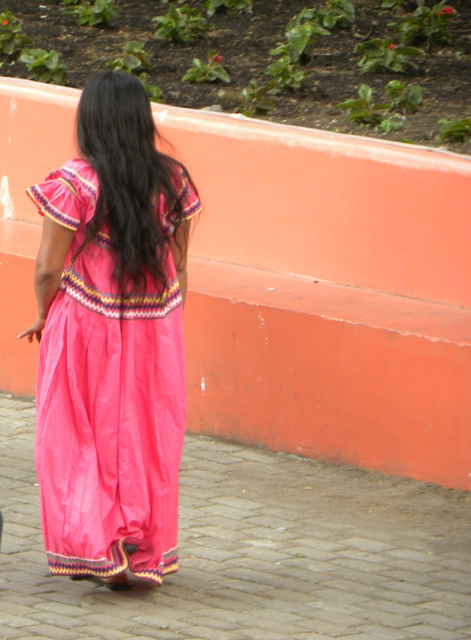 Guaymi women pad by garbed in voluminous dresses trimmed with hand-stitched rows of red, green and blue triangles. Inside the mercado, vegetables and fruits filled little stalls in testimony to the agricultural richness of the surrounding mountains’ volcanic soil. On Saturday mornings the sidewalks fluttered with lottery-ticket vendors, creating wonderment equal to Se Venden Plantas – with everyone selling, who is left to buy?

Leaving Boquete after a week’s stay, I paused at the top of the road leading out of the valley for a lingering look back. A light mist drifted out of the mountains and over the valley – the afternoon bajareque, described by Boqueteans as a “warm blizzard full of rainbows.”

As if to acknowledge my goodbye, a full-blown rainbow appeared, touching down on either side of the little town – Panama’s flowery Shangri-La. 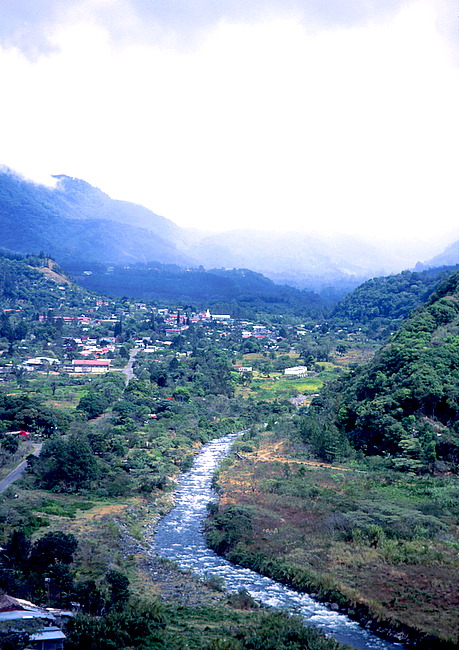 February through early May is driest, sunniest and warmest. The annual Fair of Flowers and Coffee is held 10 days in mid-January. Headquarter, as I did,  at  La Montana y el Valle, a complex of three cottages located on a hillside coffee plantation overlooking the valley.