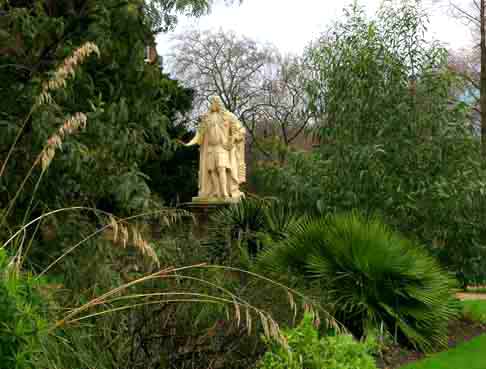 ENGLAND London – There is a yearly check Rosie Atkins, curator of London’s Chelsea Physic Garden, never fails to write and get in the mail on time. The check is for 5 pounds. So it has been, without a payment missed, since 1722.

In 1722, after nearly fifty years in existence, the garden, established by the Worshipful Society of Apothecaries of London in 1673 as an educational tool for apprentices learning to grow and use medicinal plants, was experiencing financial difficulty. Paying the rent had become a struggle. 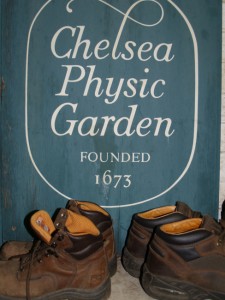 Sir Hans Sloane, a noted physician of the time who had taken over the freehold of the Chelsea Physic Garden in 1713, struck a deal: On condition that the garden “ be for ever kept up and maintained as a physick garden,” the lease would be 5 pounds a year in perpetuity.

An additional requirement was the annual delivery of 50 pressed and mounted plant specimens to the Royal Society, the United Kingdom’s national academy of science, until 2000 were received. The Worshipful Society of Apothecaries jumped to the task, with 3700 tallied by 1795. Those early specimens remain housed in London’s Natural History Museum.

The 5 pound rent check (equivalent to US $10), written by Rosie Atkins is paid to Lord Cadogan, heir and overseer of Sloane’s estates, a legacy that has made the family one of the richest in the United Kingdom.

“Hans Sloane’s agreement ushered in Chelsea’s golden age as the world’s most richly stocked botanic garden,” Atkins said as we strolled the garden’s 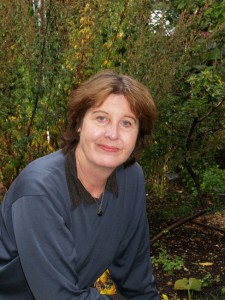 quadrants under an October sky threatening a downpour. “A new concept was taking hold: the treatment of disease rather than the chasing out of spirits. Physicians could not study medicine without studying botany.”

We took a few moments to peek into one of the oldest glasshouses in the UK where Momordica charantia, known commonly as Bitter Gourd, clings to the wall. Bitter gourd is used in traditional Chinese medicine and is the subject of research into its usefulness in treating malaria, HIV and diabetes. “There is not a plant in the garden without a story,” Atkins said.

A 300-year-old cinchona tree captured my attention. “From the Andes,” Atkins said, , “where the powers of the ‘curious powder’ from its bark were long known by local tribes. Sloane began to invest in ‘Peruvian bark,’ as it was called, and began to prescribe it for malaria. Its active ingredient, of course, is quinine. Peruvian bark caused Sloane’s reputation as a physician to soar.”

A quadrant containing the Pharmaceutical Garden displays plants of proven value in 10 current disciplines of medicinal practice – among them Madagascar periwinkle, its alkaloids used in anti-cancer drugs, and meadowsweet, the plant from which salicylic acid was first made in 1835, leading to the introduction of aspirin in 1899. Nearby, the Garden of World Medicine exhibits plants used for medicinal purposes within a variety of cultures. The Historical Walk charts the garden’s history with plants introduced over the centuries by the garden’s curators and other notable botanists. 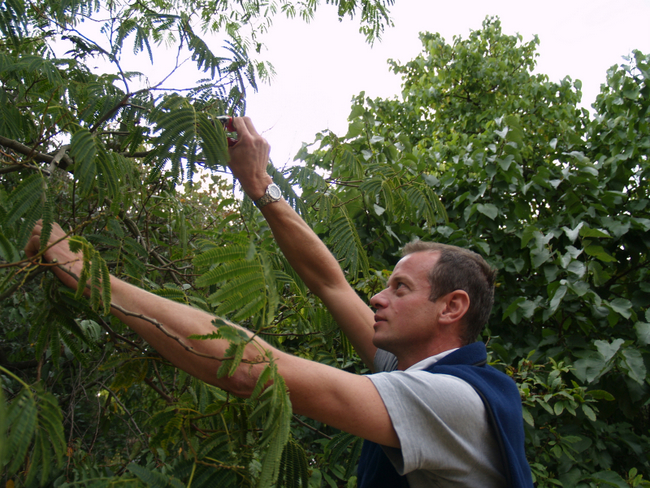 Head gardener, Mark Powsillo, paused in his pruning to chat a moment. Feeling a bit silly about posing such a question in the midst of an abundance of the unusual, I asked if he has a favorite plant. “The olive tree,” was his unhesitating response. “It grows right outside my office window, the largest fruiting olive in England.”

The garden is especially proud of its newly renovated rock garden, considered Europe’s oldest in public view. Created in 1773 for “plants as will thrive in stony soils.” it includes pieces of the Tower of London. Of equal pride is a new state-of-the-art composting area, deemed of such importance it was officially opened by Princess Alexandra, cousin of the queen. “Wonderful soil, we have here,” said Atkins, “as it should be after feeding itself for 300 years.”

Wildlife flourishes. Birds and butterflies flit by; pond inhabitants – frogs, toads, and newts – take care of the slug population. Visitors wishing to simply sit and enjoy the garden’s tranquility can do so in a space set aside among an abundance of flowering shrubs where rare peonies play show off. 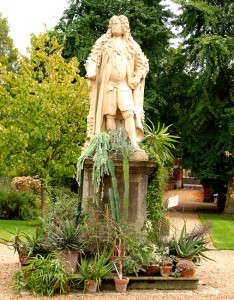 A replica statue of Sloane – the original is in the British Museum – claims center- stage in the 3.8-acre, brick-walled garden. Appropriately so. He provided the means for the garden to remain true to its origins while allowing it to come into relevancy today.

“While the European discovery and collection of new plant species was the primary focus of botanical gardens in former times, “Atkins explained, “the loss of species and habitats through ecological destruction is their pressing concern today. Here, this garden plays an ever-increasing role in propagating endangered plants and fostering programs to reconstitute destroyed natural habitats. Along with that, the study of medicinal usage continues.”

In 1673, the garden’s location was far removed from the city center. Surrounded by green fields, market gardens and orchards, it bordered the River Thames where the society’s brightly painted barge used for royal pageants and plant collecting expeditions was docked.

Through the years, the garden has lost but a smidgen of land. Embankment of the River Thames in 1874 took its riverfront and turned it into a busy thoroughfare; a strip was lost in the widening of bordering Royal Hospital Road.

“Five pounds for perpetuity!” Atkins never fails to marvel. “Do you have any idea what this central-London acreage is worth? Down the road a house is for sale for 32 million! If it were not for Hans Sloane and that 5-pound check, this garden long ago would have been bulldozed.” 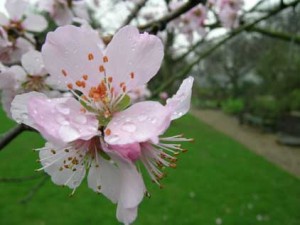 TO GO: The garden is open March 19 0 October 31, Wednesday – Sunday, noon to 5 p.m.; Charges for entry are 7-pounds (near $14) adults and five-pounds students and children. A café serves light lunches and tea Wednesday, Friday, Sunday.

While in London, not to be missed is the Museum of Garden History, dedicated to Britain’s national passion, the love of gardens and gardening. Located on the banks of River Thames opposite the Houses of Parliament, the museum is housed in what for 900 years was the parish church of Mary-at-Lambeth. Open Tuesday – Sunday 10:30 a.m. – 5 p.m. Café serves light lunches and deserts. Suggested donation, three pounds.

Nearby hotels with private gardens enhance a London stay. The Draycott Hotel is within easy walking distance of the Physic Garden. Located just off Sloane Square on property leased from Hans Sloane’s heirs it has much in common with the Physic Garden. A boutique hotel of 35 rooms and suites, rooms at the back of the property either open on to or look over a private garden square. All guests are invited to make use of the spacious garden. The Goring, an Edwardian-era hotel of 71 rooms and suites, is located within walking distance of the British Museum of Garden History. It, too, boasts the big-city rarity of a private garden.