KINGS LANDING, New Brunswick – For over 200 years the buildings that make up Kings Landing Historical Settlement served well those living in Canada’s St. John River Valley. Here, in an area so fertile that it was quickly dubbed “little Egypt,” thousands of refugees from Colonial America found a new home in the aftermath of the American Revolution. The refugees were Loyalists, American colonists who had chosen to side with the British and King George III. At war’s end, their homes and land were confiscated.

To compensate for their losses and reward their loyalty, the British government granted colonial land elsewhere. So it was that many settled in what is today known as New Brunswick, bringing with them the architectural styles, agricultural procedures and traditions of Colonial America.

In the 1960s, a massive dam project went underway on the St. John. In the process an important part of Canadian-American history was lost.

Realizing the area’s significance, the provincial government created a historical program charged with the selection of key properties. The result is Kings Landing, a 300-acre settlement of 30 buildings situated above the high-water mark of the dammed St. John. Each building, painstakingly restored, portrays a different time period between the landing of the loyalists and the turn of the 20th century.

I visited Kings Landing because I’m an avid backyard gardener. More fascinating to me than the historical buildings and their furnishings were the period plantings surrounding them.

The garden of the restored-to-1870 Country Gothic Revival house that belonged to farmer Frederick Perley, for example, features tomatoes, planted because it was then tomatoes were first recognized as edible. Hops climb the fence and escape into the trees of the 1830 Jones House. Its owner, Thomas Jones, a prominent justice of the peace and farmer was also a brewer.

In addition to dooryard gardens, eight large vegetable gardens scattered throughout    the acreage produce a bounty of produce, thanks to New Brunswick’s far north, long, summer days. All are heirloom varieties true to the time period. The gardens supply plentiful pickings for the various houses’ demonstration kitchens and the restaurant at Kings Landing Inn. 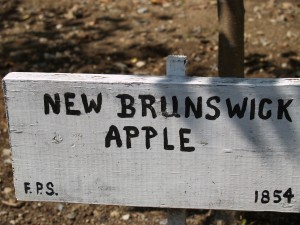 All this led to my primary reason for visiting Kings Landing – Ingraham House, with its Victorian garden and story to tell.
Built in 1830 by Ira Ingraham, prosperous farmer and son of a New York Loyalist, the sturdy, neo-classical house held court on 400 acres directly across the river from where it now stands. There it remained as the Ingraham family home for 153 years. Selected for Kings Landing preservation, in the dead of winter the house was trucked across the St. John on an improvised, icy highway to arrive on the opposite shore. Today, restored to 1840, the property is a mirror image of that time gone by.

Ingraham House’s garden took my breath away in the exuberance of its summerbloom. In seemingly haphazard array, the space was a flourish of snapdragon, strawflower, French and African marigold; towering shaggy cleome; nasturtium in shades of peach and orange; alyssum; holly hock; four o’clock in three colors – pink, rose and yellow; feverfew; begonia; zinnias, tall and short; floppy clumps of golden glow, commonly known as outhouse flower, its common name verified by a person-tall, clump of fluffy yellow flowers growing by the octagonal-shaped privy’s door at the far side of the garden.

All that and more, including medicinal plants – evening primrose for “women’s troubles,” lambs ears to pluck should one need a band aid.

Victorian horticultural disarray is kept orderly with the division of the garden into plank-edged quadrants. Walkways between them lead to a center sundial. A high hedge of eastern white cedar shelters the entire garden. An arched door cut into the hedge leads the eye across the river directly to the site where the house and garden once stood.

The Ingraham house was home to Ira, his wife Olive and sister Hannah, I learn from caretaker Sherri Legacy.

From her earliest years, Hannah kept a journal. One entry tells of the day the family’s New York property was confiscated, in which she grieves over the taking of her pet baby lamb. Hannah’s painstaking, life-long journal is today considered one of Kings Landing’s most important documents of information.

Hannah ruled over the Ingraham household. Whether or not Olive relinquished her position willingly as female head of house is up to conjecture. Hannah even took over the raising of Olive and Ira’s children, three boys and then one girl, named after Hannah. One element of the household, however, appears to have remained Olive’s domain – the garden, which flourished much as it looks today under her guidance and care.

When Ira died, he left the house to his oldest son with the provision that there Hannah could live out her life. And so she did, dying at the age of 97.

A story to contemplate as I walk the colorful garden and retrace my way through the paths and lanes of New Brunswick’s extraordinary, historic Kings Landing.