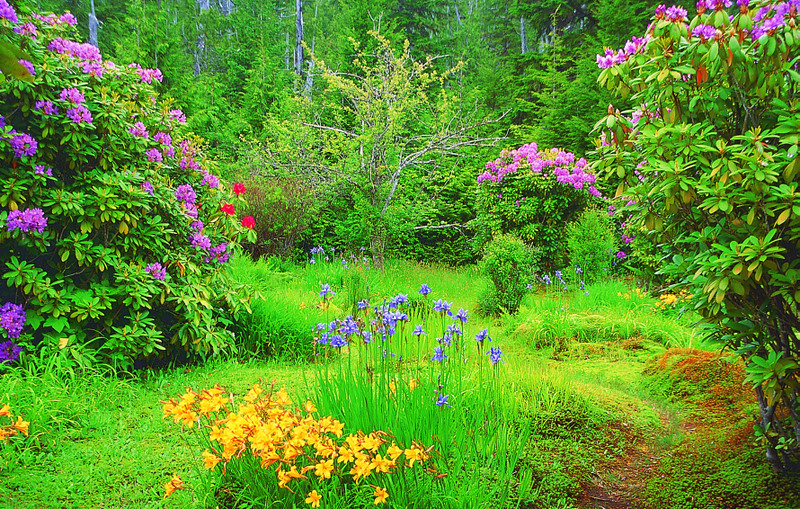 Colors and textures tumble and creep around meandering paths. And all around, pushing in on the garden’s tenuous margins, is dense and impenetrable rain forest.

A most unlikely spot for a garden …

This rugged and remote western edge of Vancouver Island, British Columbia, surely qualifies as one of the world’s most unlikely spots for a garden. Yet within its confines more than 100 species of imported trees, shrubs and plants have been identified. Some have survived in the wet, acidic soil for 90 years. All were planted by Ada Annie Rae-Arthur – “Cougar Annie.” 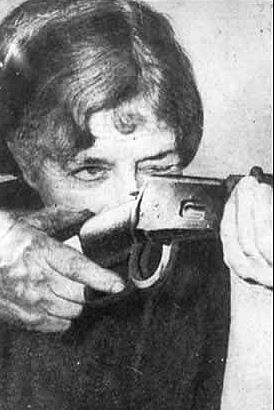 I’ve come to the garden because of a book I came across in a Victoria bookshop, Cougar Annie’s Garden by Vancouver Island resident Margaret Horsfield. She writes of “a half-lost garden walled in by tall trees and taller tales,” and of the “small and strong and grittily determined” woman, Ada Annie Rae-Arthur, who carved it out of the rainforest.

A tiny orange float plane delivered me to a curve in the sea known as Boat Basin on a 35-minute flight out of the village of Tofino. Our route was identical to that taken by Ada Annie Rae-Arthur, her husband, Willie, their three children and all the family’s worldly goods in April of 1915 aboard the steamer Princess Maquinnai. Then, as now, Vancouver Island’s west coast was a rocky and storm-lashed string of froth-fringed fjords and isolated timber-strewn beaches, a coastline pushed tight against abruptly rising forest.

By any reckoning, few places on earth are less suited for farming. But that is what the provisional government encouraged settlers to do at the turn of the century with the offer of up to160 free acres to those able to tame the land.

Most of the would-be farmers threw up their hands with but a bare look at the unwelcoming terrain, others gave it a valiant try. Ada Annie was to be the exception; her pioneer effort is the only one to endure to this day.

Dense rainforest still surrounds Boat Basin. Ancient cedars reach for the sky above vine tangled, boulder-strewn ground that gives no thought to level. Why hadn’t the Rae Arthurs, like so many others, flagged down the Princess Maquinnai for a fast journey home? 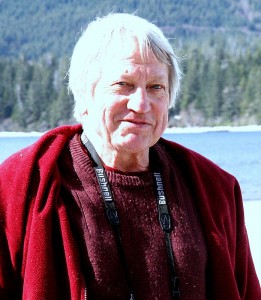 “With Ada Annie there was no turning back,” Bukland says, explaining that Willie, the black sheep of a prominent Glasgow family, had developed an addiction to opium. In return for a monthly stipend sent from his family in Scotland, she agreed to keep him away from Vancouver’s Chinatown opium dens.

The wonder remains that while others saw inhospitable wilderness, Ada Annie saw flowering bulbs, fruit trees, roses, grapes and berries – a profitable nursery business. She could count on little help from Willie, by all accounts a charming ne’er-do-well with no particular liking for manual labor. Feisty, determined, barely five-foot, Ada Annie set about felling trees and burning stumps until a clearing appeared in the bush. In the continually expanding clearing, she was to work dawn to dusk for 72 years. “It was her life, her passion,” Buckland says.

Against all odds, a garden emerged …

As the garden grew, plants were regularly rowed ashore to Boat Basin, as many as she could afford and obtain. Rhododendrons, azaleas, fruit trees, perennials, bulbs, dahlias, countless varieties of shrubs arrived for propagation, some ordered from the far corners of the world.

By the 1920s, plants nestled in sphagnum began to be shipped out on the Princess Maquinnai, orders filled in response to advertisements she placed in likely publications: “Perennial flowers; lilies, mixed dahlias, gooseberries, currants; blackberries 50 cents doz.” 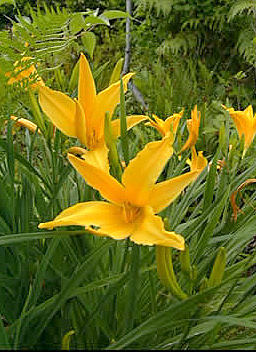 Meanwhile, between 1915 and 1931, Ada Annie bore eight more children, three of whom died in infancy and were buried in the garden under cover of heavy rocks placed to discourage marauding animals. When asked how she managed the unending tasks of tending the garden while almost continuously pregnant and with so many youngsters to rear, Horsfield quotes her a saying, “You do what you must.”

Those who came to the garden found a family barely subsisting. To increase the food supply, chickens, goats, ducks, rabbits and geese were introduced to the clearing. Cougars, sensing easy prey, went on the prowl.

While livestock protection was her primary motive, eliminating cougars was also profitable – the provincial government offered a bounty of $10 to $40 per animal. Cougars by the dozens fell under her dead-eyed aim. It was said she could fell a cougar while holding a lantern in one hand and her shotgun in the other. Her fame spread. Ada Annie Rae-Arthur became known as Cougar Annie.

Buckland tells me of his first meeting with Ada Annie. It was spring of 1969 and he was tramping about the area with a friend ferreting out old mining claims in the hope of finding a bit of gold left behind. 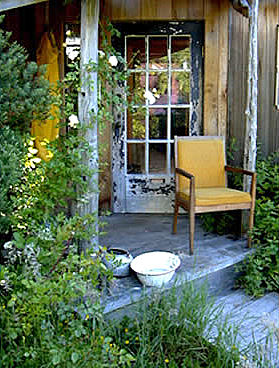 “We walked through the garden’s gate, went up to the house and rang the bell. A tiny lady with bright blue eyes came to the screen door. I introduced myself, saying, ‘We stopped by to say hello and to see if we could buy some eggs.’” A friendship grew, along with Peter’s deep admiration and liking for the strong-willed lady.

Buckland, a Vancouver stockbroker, found himself drawn to the clearing, coming as often as he could to willingly become part of her fetch and carry supply line and requisitioned labor force. “She was always charming,” he remembers. “But you always knew that in the back of her mind she had something she wanted you to do.”

As the years passed, he watched the wilderness creep into the garden, overtaking Ada Annie’s increasing inability to keep it a bay. In 1981, 92 years old, all but blind and yet refusing to entertain a notion that she might leave, she offered Buckland the opportunity to buy not just her garden but the entirety of her 177-acre property with the understanding that she could remain there as long as she wished. Buckland agreed. In 1985, at the age of ninety-seven, Cougar Annie died.

A walk through the garden …

We walk the path to her small, shingled house, now teetering so drunkenly that no one would dare step inside. Here she lived among molding piles of nursery orders and catalogs, tacked-up animal skins and shelves jammed with musty canning jars filled with fruits and vegetables. 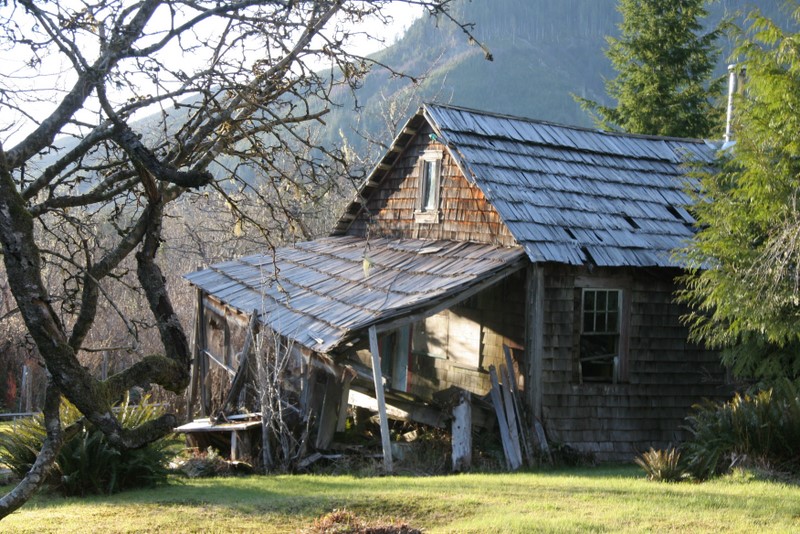 Dahlias emerged as a specialty …

“Dahlias had become her specialty,” Buckland told me as we looked through a cobweb-strung window. “Even when she was very old and her sight was failing, she carried on, sitting hour after hour at her kitchen table, feeling for the eyes of the tubers, paring them apart, readying them for shipping.” 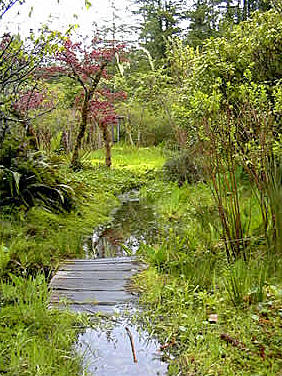 Continuing into the garden, we pass the goat shed, a collapsed wooden wheelbarrow and come across the graves of the three Rae-Arthur children, the stones covering them turned into a soft blanket of moss. Nearby is Willie’s grave in a setting of rhododendron and heather. In July of 1931, Willie’s rowboat, which he had taken into the harbor, drifted back empty to shore. Death was ruled accidental.

While Willie had avoided hard work, she had counted on him to perform certain tasks. She advertised for a replacement. In the years to come she was to enlist and outlast three. “I’ve often thought,” Buckland said with a laugh, “that if she had been a bit younger and I a bit older she might easily have annexed me as Number Five.”

A need to let the garden breathe again …

After Cougar Annie’s death, Buckland came to the garden monthly, hacking away at the tangle that had jumped the fence to all but obliterate the clearing. In 1987 he built a house near the beach and moved permanently to Boat Basin. “A lot of people thought I was completely nuts,” he says. “But all I knew was that I had to let the garden breathe again.”

He speaks with amazement at what sprang forth each season. “Look at all this!” he said. Everything you see was lying here waiting to be uncovered. All it needed was light and air.”

Ensuring that the garden would endure …

After almost 10 years of endless labor, Buckland established the non-profit Boat Basin Foundation for the purpose of drawing attention to the botanical diversity and historical importance of the garden and to provide a field center for temperate rainforest ecology study. “This place is important,” Buckland says. “Its maintenance must be insured for future generations.” With advance notice, small groups and scholarly individuals are welcomed during the warm-weather months – botanists, painters, gardeners, those studying temperate rainforest ecology. Several small rustic cabins have been built for overnight stays and a central hall constructed.

The buzz of a plane overhead announces that the float plane has returned to fly me back to Tofino. Lifting up, we turn to circle the clearing. There it is, a tapestry of color and textures surrounded by nothing but impenetrable terrain, a strange and mystical sight. Once again we circle the garden – the garden that owned Cougar Annie. 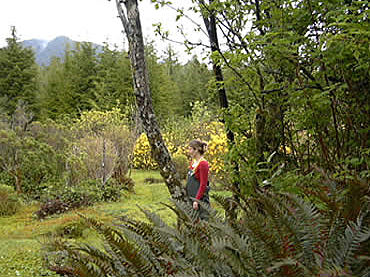