Il Biviere – the garden that wasn’t

Il Biviere – the garden that wasn’t

ITALY Sicily – While others search out museums and cathedrals when traveling, I search out gardens, looking for those that could be no other place then where they are, gardens with a tale to tell. With Sicily in my travel plans, I perused guidebooks to find a likely candidate and found none that met my criteria. With that, I wrote to the Italian Tourist Board giving them a list of Sicilian ports I’d be visiting while on board the magnificent yacht Sea Cloud, the 1930s-built plaything of heiress Marjorie Meriwether Post. An e-mail message came flying back: From Syracuse make your way to Il Biviere.

Turning to the internet, I found contact information. Yes, I’d be most welcome to visit the garden. A driver would meet me at the dock.

Delving the Internet deeper, I read of a garden with mythological beginnings involving Hercules, the harvest goddess Cecere, and the skin of Nemean the Lion that, in the complicated way of myths, led to the creation of a lake: Lacunus Erculeus.

I learned that when Sicily was under Arab rule, 832AD – 1060AD, the lake became known as Il Biviere, meaning “watering place for animals.” So abundant was Il Biviere in flora and fauna that for centuries to come it was favored grounds for sportsmen – until the 1930s. Fear of malaria led to the draining of the lake. Lushness gradually became an eyesore of dust and rocks.

A derelict ready for transformation … 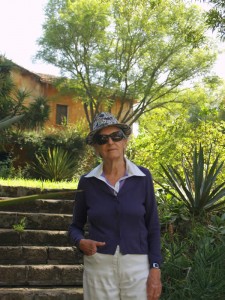 In 1968, Principe Scipione Borghese and his wife Principessa Maria Carla Borghese, owners of Il Biviere by order of a 1392 feudal edict, decided to farm citrus on the land. That decision somehow metamorphosed into a renowned Mediterranean garden. I had to go see.

As promised, a car awaited at the dock. Leaving Syracuse behind, we entered an unpromising landscape of industry and neglected agriculture. Turning off the main highway, we crossed a small bridge over the reed-choked Lentini river, to pause at a solid green gate centering a bougainvillea-draped wall.

The gate slowly opened revealing an oasis in every shade of green. Passing a small chapel edged in a flurry of blue plumbago with 1694 chiseled into its façade, we pulled into the graveled parking area of a Mediterranean-style mansion.

Principessa Maria Carla Borghese – a tall woman of elegant bearing that my arithmetic told me was entering her eighth decade – greeted me dressed in white jeans and a casual sweater. I asked if she might tell me about the garden’s beginnings before we explored the garden’s acreage.

“The decision to move here completely changed our lives,” she said of their 1968 plan to transform Il Biviere into productiveness. (From my reading I knew of the death of Principe Scipione Borghese in 2001.) 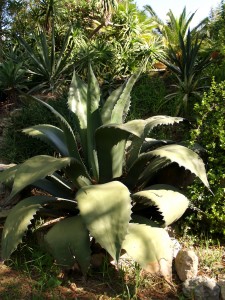 She continued: “How could we and our four children live in this miserable place, the house in miserable disrepair and all around rocks and dust! I had a decision to make. Either I could continue being depressed or roll up my sleeves and try to turn this terrible spot into a place to live.”

She began to imagine a garden with all kinds of trees, big flowering bushes, vines – “A garden that wasn’t,” as she described it. “Where to begin? Then, an idea. I could give the jetties, the long jetties of the ancient port, a new reason to exist!” Filling the rock jetties with soil was easy, but what to plant?

“I’d no gardening experience, and we couldn’t afford a landscape architect,” she said. “I haunted nurseries and private gardens and became fascinated with succulents. Such variety! Tall and slender, short and round, thorny, trailing – and yet undemanding of care.”

“In June of 1969, a lorry of plants selected by the gardener of Palermo’s Villa Trabia came to the gate carrying unusual specimens from faraway countries,” she said. “Young elms, small Phoenix canariensis, lovely boulevard palms. The gift began this oasis.”

As we strolled the now mature garden, I was introduced to the Parkinsonia aculeata, its presence in the garden due to a visit to Greece in 1980.

“I became enchanted with the tree’s feathery leaves, yellow flowers ,jasmine-like scent, “ she recalled. “I gathered from seeds. In the spring I had a lovely seedling. Look at it now!” 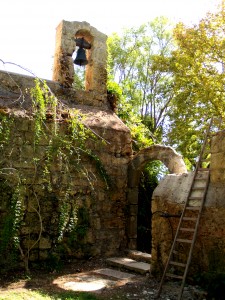 We walked along the planted jetties to admire the diversity of the succulents that has made Il Biviere well known to collectors, continuing on through varieties of cactus, roses, agave, aloe, roses in a variety of shades, olive trees – on it went with the principessa providing the botanical name and stories about each along the way.

There were stories other than horticultural to be told: “In March of 1988, a phone call came from a gracious man wanting to know if we’d be willing to receive the Queen Mother, who would like to visit our garden. I was speechless!

“She came in June with her entourage. We lunched together and walked the garden, she dressed in light blue head to toe and carrying a white parasol. ” The Queen Mother was the first of hundreds drawn to Il Biviere, including art critics, film directors, landscape architects and many, who just like me, simply love gardens.

It was time for me to leave, if I were not to miss Sea Cloud’s departure from the dock at Syracuse. As we drove through the gate, I asked if we could stop so that I might take a last look back at the lush landscape evolved from princess Maria Carla Borghese’s “ garden that wasn’t.”