CALIFORNIA Sonoma County – For nearly 50 years straddling the turn of the century, Luther Burbank’s display gardens in Santa Rosa. California stopped passersby in their tracks. Giant evening primroses, big as pocket-handkerchiefs, filled the beds one season. Another, red and orange poppies put the beds aflame. In 1918, Rainbow Swiss chard caused a line-up at the picket fence.

Luther Burbank Home and Garden, as it is now known, continues to fascinate visitors as they peer into his Victorian-style greenhouse, traipse through his modest house on docent-led tours, and walk paths on the land where the horticultural pioneer showcased his hybrids.

Even schoolchildren know of Burbank (1849-1926) as an American botanist, horticulturist and pioneer of agricultural science. Few, however, know that his Gold Ridge Farm, eight miles to the west in Sebastopol, is equally delightful to visit. 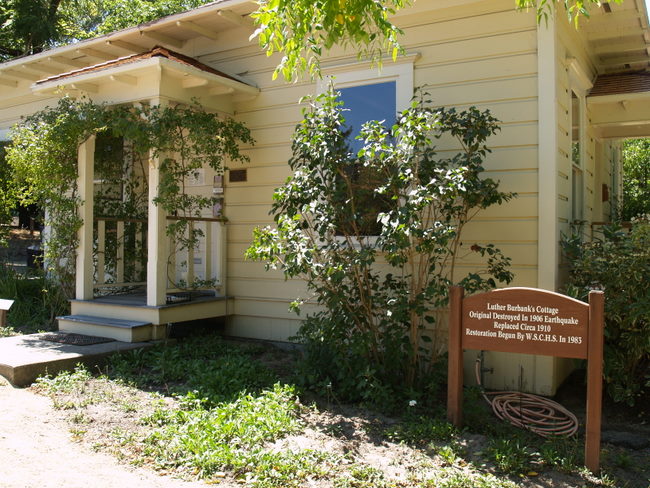 It was here, beginning in 1885, that the “plant wizard” conducted his breeding experiments. By the time of his death in 1926, some 800 Burbank varieties were developed on Gold Ridge’s 18 acres, enriching the botanical alphabet from abutilons, the familiar Chinese lantern flowering shrub, to zauschnerias, relative of the evening primrose. Only after each had been polished to Burbank’s personal vision of perfection were they transported to Santa Rosa for showcasing and marketing.

After Burbank’s death, Gold Ridge Farm gradually deteriorated until the Western Sonoma County Historical Society took over in1980. The cottage, where he frequently stayed overnight instead of making the hour and a half horse and buggy drive back to Santa Rosa, was refurbished; a faithful replica of his barn that burned in 1967 was built; little by little an army of volunteers cleared decades of overgrowth to allow vestiges of the remaining three-acres of farm to emerge; listing on the National Register of Historic Places was accomplished. As at the showcase gardens in Santa Rosa, visitors are welcome free of charge.

The farm is not the easiest place to find, tucked away as it is between an apartment complex and the Sebastopol Memorial Lawn Cemetery off Bodega Highway a mile east from downtown. Make your way through the complex and park by the barn. A path leads to the cottage where a mailbox is stocked with self-guided walking tour brochures. Forty-five points of interest are listed.

In addition to the brochure’s descriptions, several knowledgeable volunteers are usually on hand to willingly pause from their tasks to answer questions and share Luther Burbank stories that bring the farm to life.

On my most recent visit, I hit pay dirt with Bob Hornback, horticultural historian and president of the Western Sonoma County Historical Society, and Patty Levenberg, greenhouse manager, puttering about in the beds near the cottage. Hornback has been a member of the Historical Society’s Farm Committee for more than 25 years and was instrumental in preventing the farm from “slipping through the cracks of history.”

“It was here that all his breeding efforts took place,” Hornback said as he took me inside the cottage to show me a wall-sized map that Burbank had made of his then- ongoing experiments, row upon row covered with combinations and permutations, plots of thousands of a single variety in the process of becoming bigger, better, more beautiful – all noted in code. “The code book he kept in his head,” Hornback added.

There was reason for such secrecy. Despite Burbank’s unstinting efforts, federal legislation to allow plant breeders to patent their creations wasn’t passed until after his death. The farm was fenced, gates locked, with workers pockets searched before heading home at the end of the day. With no patent protection, Burbank’s only source of remuneration was to sell his inventions outright – root, stalk, flower and seed – to commercial nurseries, which often renamed the variety to suit their own marketing strategies. As a result, only a few Burbank-developed plants can be asked for by name today.

By 1902, he had become a national hero, compromising not only the secrecy of his experiments as increasing numbers of people clambered to visit the scene of his “wizardry” but also the uninterrupted time needed to carry on his dawn-to-dusk efforts.

In 1904, his catalog requested would-be visitors to fill out an application in which such questions as “for whose benefit is this interview?” be answered. Inside the cottage a 1910 appointment card is on view, listing charges of $10 for an hour’s visit, $5 for half and hour and $2.50 for 15 minutes. A princely sum in 1910, but explained on the card: “The burden of entertaining the multitude has become so great that the experimental work has been seriously crippled and must be wholly discontinued unless visitors are greatly reduced.”

Many of his introductions began with the planting of seeds in his Santa Rosa greenhouse to be transplanted as starter plants into the Gold Ridge’s deep, sandy loam. Fruit-tree experiments included the grafting of test branches onto a “mother” tree, with one cherry tree turned into a jigsaw puzzle of hundreds of grafts that might lead to a desired hybrid. That overburdened tree has died, but an English walnut tree and a chestnut, each with eight grafts, continue to survive as does his Royal Black Walnut hybrid planted in 1885 that still produces a ton of walnuts each year.

As I walked the farm with Hornback, I asked him about his personal favorite. “The Shasta Daisy,” was his unhesitating reply. “Absolutely one of Burbank’s most outstanding achievements, a true labor of love that took more than 15 years to complete.”

As a child growing up in Massachusetts, Burbank loved the oxeye daisies growing wild in fields throughout New England. What other regarded as a pesky weed, he saw as something waiting to be made more beautiful – a daisy of extreme size with petals of dazzling whiteness, smooth stems and good keeping quality on sturdy plants that bloomed early and persistently. In 1904, he introduced the first named varieties of Shasta daisy: Alaska, California and Westrailia. As late as 1925, he continued to offer new varieties. Today, on-going developments continue giving the Shasta daisy the longest history of continuous popularity of any hybrid American garden flower. With 25 varieties, the farm’s collection is one of the largest Shasta daisy collections in America.

Gold Ridge Farm is open daily at no charge. Visitors are welcome to picnic at tables set up under the trees. On Wednesday mornings, replications of various Burbank varieties are offered for sale. Docent-guided tours can be arranged by appointment. An annual open house, with docent led tours and a major plant sale, is held in September.