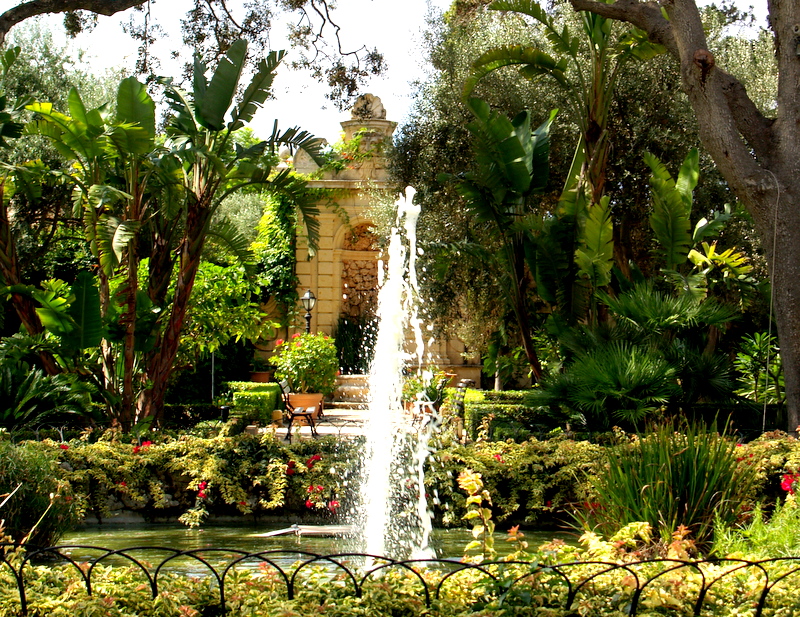 MALTA – One cannot spend much time on the tiny multi-island nation of Malta, without running smack dab into the Knights of the Order of St. John.

Not literally, of course, since their 268-year stay ended 200 years ago. But evidence of their existence is everywhere on Malta’s main island – also called Malta – as they went about transforming a limestone breadcrumb in the middle of the Mediterranean Sea into a prized jewel of mighty defenses and buildings of architectural splendor.

Valletta, Malta’s capital city, showcases an abundance of the Knight’s greatest buildings. On this day, however, I was on my way to the village of Naxxar in the center of the island to visit Palazzo Parisio.

Designed in 1773 by the Knight’s Grand Master Manoel de Vilhena, a popular ruler responsible for many of the island’s greatest buildings, its purpose was to serve as a country retreat from the city’s bustle for the aristocratic Parisio family headed by Sir Paolo Parisio. (The Parisio’s Valetta home, also called Palazzo Parisio, was where Napoleon chose to live after evicting the Knights.)

Sir Paolo enjoyed the magnificence of his country home until his death in 1841. Leaving no heirs, the property passed temporarily to the Jesuit community.

More than 50 years later, Giuseppe Scicluna, a wealthy merchant banker ennobled as a marquis by Pope Pius IX,  purchased the property with the idea of turning it into a regal residence that would rival Europe’s most glorious. Effort and money was not to be spared. Of course, such a house should have gardens to match; the gardens I was on my way to see this September 2010 day.

On Malta, a network of colorful buses takes anyone anywhere they want to go 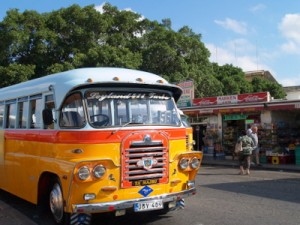 for the euro equivalent of about 60 cents.  I could not miss Palazzo Parisio, I was told, just look kitty-corner from the bus stop on Naxxar’s main square and there it will be.

But somehow I was missing it. Yes, there was the parish church grandiose as a cathedral, just as described, but where was the grandiose Palazzo?

“Right there,” the man whom I’d interrupted from his morning coffee at a sidewalk-table said pointing to the austere building directly in back of me that I’d eliminated as palazzo possible.

Behind heavy front doors, the entry hall introduced the over-the-top embellishments the Marquis had embroidered on Manoel de Vilhena’s already opulent design. A tour of the rooms could wait, for straight ahead, glimpsed through an arched doorway, were the magnificent walled gardens I’d come to see.

I entered a garden of  classic, Italian, formal symmetry designed in a quadrant of fountain-centered lawns bordered by clipped, euonymus hedges.  Terraced edges along the walls were brightened with cascades of bougainvillea, stands of oleander introduced Mediterranean color to the overall greenery.

On the left, the Orangerie, used by Sir Paolo to house oranges and lemons, today showcases ferns, lilies and hothouse plants. A stone maiden wades in the center of a stone grotto in a far corner, giving  a glimpse of the intricate irrigation system installed during Marquis Giuseppe’s renovation of the Palazzo.

Construction stone was quarried on site, creating an enormous excavated space that, tied to various wells in the area, was turned into a gigantic reservoir that extends sight unseen under the gardens. 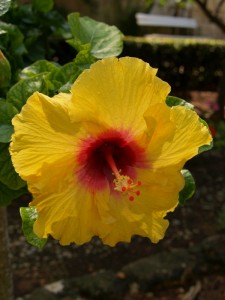 A pond, fountain spouting in its middle,  centered the quadrants. Pathways on either side invited meandering through a citrus grove and a botanical collection of unusual shrubs and trees, and past a circular garden planted with some 60 species of hybrid hibiscus erupting in a riot of colors.

Here the garden ends for visitors at a locked, wrought-iron gate. Peering through, one can look  down a half-mile-long walkway flanked by olive trees, brought in by the Marquis as already ancient specimens, with its finale a belvedere from which, I was told, a view extends to the sea.

When the Marquis’ vision of creating a miniature Versailles was completed, eight years had passed. One year later, he died, leaving his four-year-old  son, John, as his sole heir.

Palazzo Parisio is today owned by John’s two daughters and operated by his granddaughter, Christiane Ramsey Scicluna Pergola, who took on the preparation of opening Palazzo Parisio to the public.

Restoration, conservation and upkeep remain an ongoing responsbility for the family. Two restaurants, the informal Caffé Luna and Luna de Sera for fine dining, help pay the bills. Palazzo Parisio is open daily, 9 am – 6 pm. Admission to tour both the palace and the garden is adults, 9 euros; students 16 and over, 6 euros; children 4.50 euros; those under 5 years, free. To tour the gardens only, the fee is 6 euros,adults; 4.50 euros, children.  Palazzo Parisio: 29 Victory Square, Naxxar NXR 1700, Malta. Telephone +356-2141-2461; Web www.palazzoparisio.com. 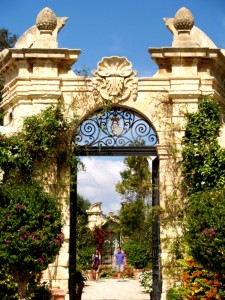