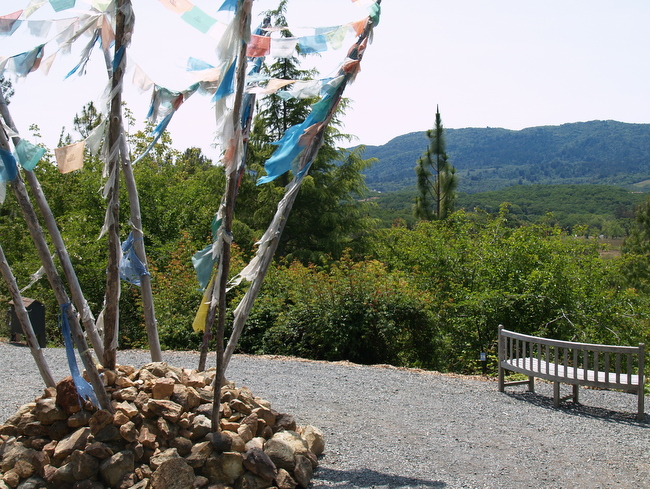 CALIFORNIA Sonoma County – Lilies are the showoffs all summer at Quarryhill Botanical Garden, a 22-acre garden near the hamlet of Glen Ellen in Sonoma County’s Valley of the Moon. The show begins in May, with lily lovers from far and near arriving to catch Lilium leucanthus’ towering 7-foot stems topped with the magnificent white trumpets that herald the garden’s coming lily parade.

“Lilies have been cultivated for thousands of years,” said Bill McNamara, Quarryhill director. “They have been grown for food, used in medicine, and remain a religious symbol in many parts of the world. Mostly, though, they are sought after for their beauty.”

All of Quarryhill’s lilies all hail from temperate Asia – as do all of the garden’s plants – where the lilies prefer to grow with their feet in rocky, fast-draining soil and their heads in full sun, growing conditions easily duplicated on Quarryhill’s hillsides and deep gullies that once supplied crushed rock for road building in the 1920s and ‘30s.

Approximately one-third of the 61-acre former quarry site is devoted to the garden, a botanical treasure house that contains one of the largest North American collections of wild-source, scientifically documented, Asian plants in North America.

Quarryhill’s more than 10,000 plants from 2,000 species are allowed to flourish in informal abandon. The garden recreates as far as possible that occurring in an Asian forest, as was the wish of Jane Davenport Jansen, who died in 2000 and left an endowment to run Quarryhill, a non-profit organization with a full-time staff of 10, including five gardeners.

The garden began in 1987 under Jansen’s guidance. The steep, rocky, thicket-covered hillside was gradually transformed into a trove of plants from China, India, Japan and Nepal.

Annual foraging expeditions in search of seeds and bulbils are conducted with other botanic gardens, including the Royal Botanic Garden at Kew outside London.

“No responsible collector disturbs natural habitat by digging and removing plants in the wild,” said McNamara, who has participated in many treks, including the first, as a volunteer, in 1987. The majority of the seeds came from China, he said “where almost a third of the world’s total of more than 90 lily species occur. 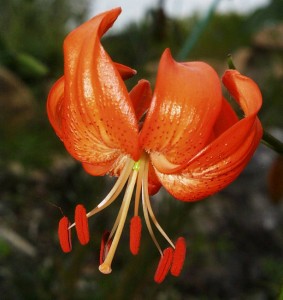 Described below, following the first-blooming Lilium leucanthum, are what lily fanciers can see at Quarryhill: Deep orange Lilium davidii ushers in June with as many as 23 flowers bursting forth on its 3 to 4-foot stems. “It was named after a French missionary, Pere Armand David, the first westerner to come across it,” McNamara said, adding that there is not a plant in the garden without a story to tell.

June enjoys a flurry of blooms, among them the highly fragrant Liliumregale, considered by early 20th century plant collector E. H. Wilson as one of his most prized finds, even though the broken leg he suffered in its pursuit left him with what he called his “lily limp.” Now, too, sturdy Lillium brownii,cultivated for centuries in China for its edible and medically useful bulbs, puts its rosy-purple trumpets with white interiors on view.

In late June, Lillium duchartreireveals its dainty turk’s caps – so named for their curled shape resembling a pasha’s headdress – produced from seed gathered on Quarryhill’s 1988 expedition into China. “We spotted it in northern Sichuan at 8000 feet elevation growing in an open valley of dense shrubs and scattered pines,” McNamara recalled.

Blooming about the same time, Lillium sargentiaeis distinguished by stems crowded with bulbils and its white, highly perfumed trumpets with yellow throats. 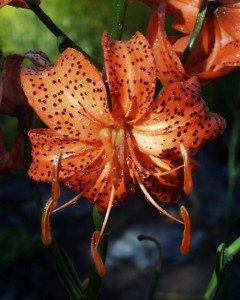 Audacious Lilium auratumushers in July. A popular Japanese lily, its name translates to “ornamented with gold,” reflecting the embellishments of its white, 10-inch flowers.

In contrast, the delicate light-yellow lantern-shaped blooms of Lilium lophophorumbarely manage a nod above surrounding foliage. Although lophophorumin its native habitat thrives in high elevations, as much as 15,000 feet, it has adapted well to Quarryhill’s much lower elevation.

August introduces Lilium henryi, which may have as many as 15 turk’s-cap blossoms on its 3 to 4-foot stems. Then comes a sea of the orange tiger lily, Lilium leichtlinii var. maximowiczii, withstems soaring over 6 feet topped with spotted turk’s-cap flowers.

Tempering all that mid-August orange are the stunning, huge, pink flowers of Lilium speciosum – its name meaning “splendid, brilliant.” Finally Lilium formosanumreluctantly announces the end of Quarryhill’s lily show, its 6-inch white trumpets gracing towering stems more than 8-feet tall. So reluctant is formosanumto step off stage that it has been known to make curtain calls into December. 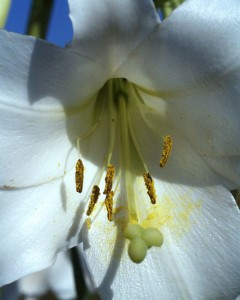