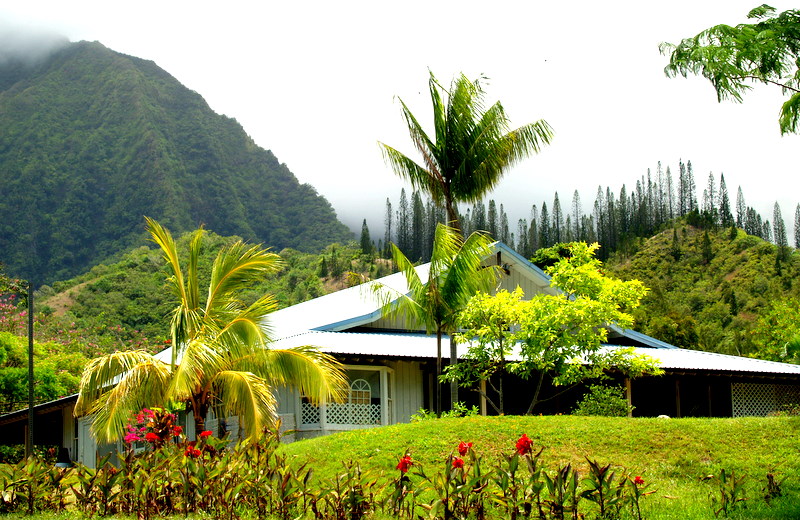 HAWAII Oahu – Patsy Fong is sorting ti leaves, hundreds of glossy green leaves piled according to size and quality. She works quickly, seemingly without thought, while carrying on conversations with those arriving at the open-air pavilion of the garden’s visitor center at Senator Fong’s Plantation & Gardens for a lei-making class. Clearly she has done this before.

Important plant, the ti, sacred to Laka, goddess of the hula. One hundred ti leaves add up to a hula skirt. Wrapped in a piece of cloth it will last for years, aging to the rich brown of those pictured in old Hawaii drawings.

This is just one piece of plant-lore among much more learned at the garden.

A parcel of land untouched since the time of the ancients …

In 1950, Senator Hiram Fong didn’t set out to plan an attraction that warrants one of the Hawaiian Visitors Bureau distinctive roadside markers. He simply was trying to settle his wife’s complaints about the flies the two horses he had bought for their children were attracting. Couldn’t he please find a small parcel of land away from their house? 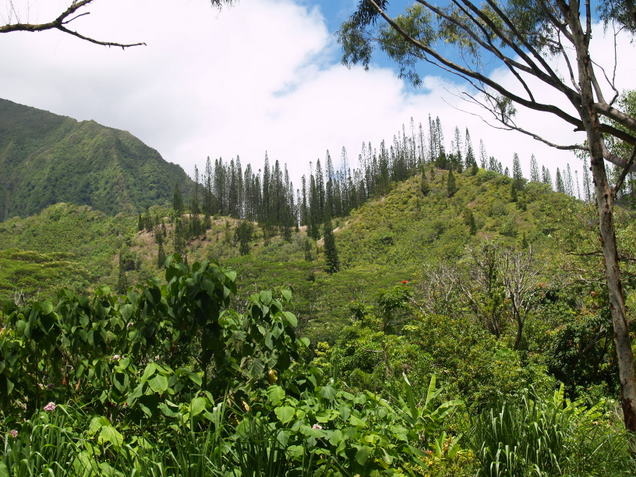 So it was that he ended up with 700 acres of breathtaking beauty on O’ahu’s windward side, land virtually untouched since the days of the ancients, situated above a sweet curve of Kane’ohe Bay and stretching inland to meet the majestic, mist-drifted Ko’olau Mountains. Obviously far too big of a spread for just two horses, so why not plant some bananas?

It wasn’t as if Fong hadn’t enough to do. In 1938, at the age of 31, he won his first seat in the Territorial House of Representatives where he served for 14 years. When Hawaii gained statehood in 1959, Fong ran for one of the two new Senate seats to and became the first Asian American elected to the United States Senate. He held that post for 17 years, servng through the terms of five presidents.

A garden of respite and renewal …

During those years of service, he turned to his windward O’ahu garden for respite and renewal. There he could be found planting, weeding, watering, trimming – activities he continued until shortly before his death at age 97 in 2004.

In addition to bananas, Fong began to casually plant other things – jackfruit, palms, kukui, along with cash-crop stands of papaya, lemon and avocado that help sustain the garden today.

A garden reminiscent of what the ancient people saw …

Little by little the idea of developing a preserve took hold, a place where visitors could 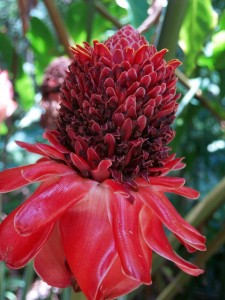 enter a landscape reminiscent of that the early Polynesians saw hundreds of years ago: forests of kukui, hala, koa, and ohio-ái, a place were ti and pili grass still cover the slopes and ancient spirits feel at home near quiet streams.

To honor the five presidents during his tenure as senator, Fong divided the land into five areas: Eisenhower Plateau, dedicated to ethnic varieties such as the Hong Kong orchid tree, Java plum, and Chinese chan pac; Johnson Plateau, adrift with the fragrance of dozens of varieties of exotic fruits; Kennedy Valley where over 25 varieties of heliconia and ginger and 80 varieties of palms thrive under a rainforest canopy; Nixon Valley, where the more than 60,000 flowers that are picked each week for the garden’s lei-making classes are grown – plumeria, crown flower, orchids, bouganvillia, puakenekenes; and Ford Plateau, notable for its hillsides covered in the native pili grass that was used for the thatching of houses in ancient times. All lushly flourishing, most planted with his own hands.

Although this sounds like an orderly garden, that is far from so and not intended to be. Instead the landscape was allowed to emerge as nature willed in the manner of old Hawaii. If something planted here was somehow carried there, often by bird or breeze, there it stayed. So it is that while heliconia and ginger, for example, are notable in Kennedy Valley they are to be found almost everywhere else. Ti revels under a banana, lychee leans into a mango, philodendron mixes it up with a macadamia specimen – and on it goes. 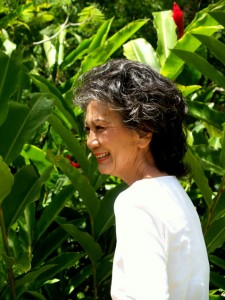 a family enterprise. More often than not, it will be Patsy Fong, the senator’s daughter-in-law, whom visitors traipse after on the the walks that are scheduled twice-daily into the garden.

Among that learned: The early Hawaiians used young banana trees as truce flags in times of  war and considered the fruit such a delicacy that certain varieties could only be eaten by the chiefs. Sweet potatoes are favored fodder of the wild pigs that come down from the mountains.

Mango trees, some entering their fiftieth year, appear lush and prolific thanks to the 70 to 80 inches of rain the area receives each year. The mango fruit grown here, however, is not up to snuff – too watery.

A dense cluster of uluhe, false staghorn, covers a slope, providing a plentiful supply of material for the creation of head wreaths, as Patsy demonstrates. Above, a white rumped shamma flits through the trees chirping its melodious song, quickly changing its tune to mimic that whistled by a walker.

Plants for what ails you …

The prolific, tiny, hard-as-nails cones of an ironwood tree are passed around, with Fong wondering aloud why Hawaii’s parks and recreation departments tend to plant rows of ironwoods along the edges of beaches, exactly where everyone wants to walk barefoot.

Suffering a touch of indigestion? Chew on a guava pit, swallow the saliva, spit out the pit, and all will be well.

Sandalwood, prized as a fragrance fixative and for its wood, contains its most precious oil in its roots, arrived at by uprooting the tree during the rainy season. Hawaii’s great sandalwood forests were harvested to near extinction in the 1800s. But here on the windward side of Oahu, a plantation of 100 specimens flourish. Located in Nixon Valley, the trees were a gift to the garden by the State Department of Agriculture in 1989 in commemoration of the bicentennial of Chinese immigrants arrival in the islands.

Other gifts were more modest, like the un-named seedling the senator’s auto mechanic gave him in a rusty coffee can. Once stuck in the ground, no one paid much attention as it grew into a tree until one day, fourteen years later, someone noticed that it had bedecked itself in lovely flowers, each of which metamorphosed into what looked exactly like a cannonball, for which the tree is commonly called,

Watch your head under the coconut trees …

The walk circles back, with the group cautioned to keep to the middle of the coconut tree-lined path that leads to the visitors center. As Fong reminds, wreaths of uluhe are  far from hard-hat protection when it comes to being bonged on the head by a falling coconut. 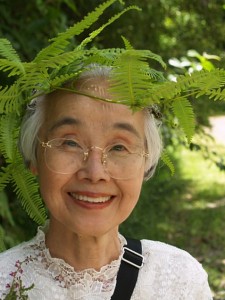 Senator Fong’s Plantation and Gardens is located on the windward side of O’ahu just outside the town of Kane’ohe, approximately a 45-minute drive from Waikiki or downtown Honolulu. Alternative to those without a car: From Honolulu’s Aloha Moana Shopping Center transport hub take the number 55 Circle Island bus. Ask the driver to let you know when to get off. From there, it’s a pleasant one-mile walk to the gardens.

Guided nature walks, an easy and leisurely mile-and-a-half stroll, depart at 10:30 a.m. and 1 p.m; a fee is charged. Lei-making classes are on-going daily; again with a fee. No reservations are necessary for either the walks or the classes.