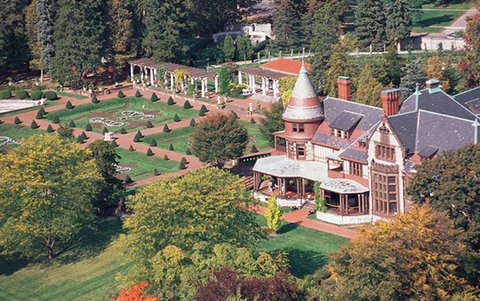 NEW YORK Finger Lakes – It was the gilded age of grand rustic retreats enjoyed by the likes of the Rockefellers, Vanderbilts and Roosevelts who sought to emulate the country homes of European nobility. Grand “camps” they were, monuments to wealth, claiming land in nature’s most picturesque locations.

In 1857, Mary Clark, daughter of then- New York Governor Myron Clark, married Frederick Ferris Thompson, co-founder of what would become Citibank. Mary was born and raised in New York State’s Finger Lakes – her father, before becoming Governor of New York, served as sheriff of Ontario County. The family made their home in the town of Canandaigua. 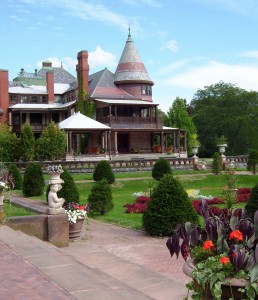 When Mary and Frederick decided to build their country retreat, Mary’s thoughts returned to her childhood home. In 1885, the couple began to build their summer mansion on acreage overlooking Lake Canandaigua. Sonnenberg (from the German “sun hill”) was completed two years later, a 40-room, Romanesque, Tudor- influenced monument constructed of soft-tinted stone. Complete with turrets, arches and porticos it somehow managed to portray a sense of hospitable comfort.

Frederick spent his retreat time with photography; Mary turned her attention to the creation of gardens that would be the equal to any in the world.

She began to travel extensively in Europe and the Orient collecting ideas for the projects she had in mind. For design ideas she turned to famed Boston landscape architect Ernest Bowditch, employing his assistant, John Handrahan, full time to take charge of the construction. Hundreds of workers labored to construct the complex of gardens on acreage that already held a five-building aviary, golf course, bowling alley, Roman baths, swimming pool, tennis courts, a stable for guests who cared to ride, and a full-fledged farm.

After Frederick’s death in 1899, Mary dedicated the final 18 years of her life to the creation of gardens in her husband’s memory.

With no children resulting from the marriage, the estate passed into the hands of a nephew. Faced with crushing taxes, it was sold to the Veteran’s Administration in 1932. A hospital was built; the mansion converted to nurse’s quarters; aviary cages razed; pools filled in; gardens allowed to go fallow.

It was late summer when I stepped into Mary’s halcyon horticultural treasure. With map in hand, I set out to stroll Mary’s nine gardens in the order of their construction. 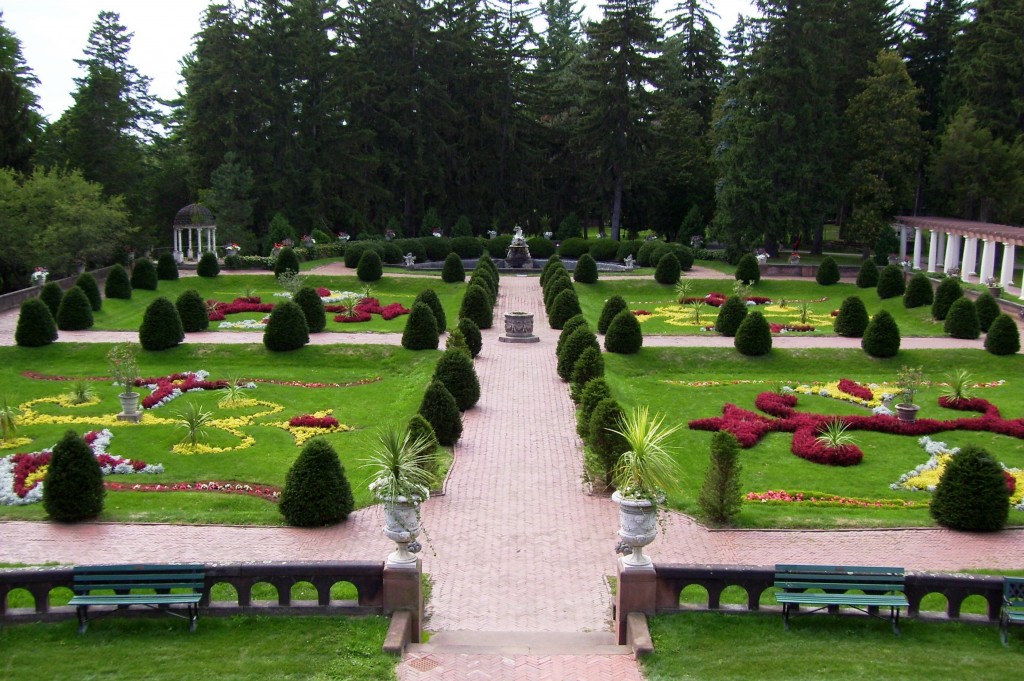 First the Italian Garden, 1903, designed to “swim into view from the house terrace like a symphony of formal floral designs,” as described by John Handrahan. Following a classic design, the garden is divided into boxwood-edged quarters with paths leading a white marble fountain of Hercules. Some 20,000 red and gold annuals are raised in Sonnenberg’s greenhouse to supply the garden.

A pergola divides the 1906 Rose Garden from the Italian garden, an amphitheatre of roses billowing in a sea of curves. Five-thousand rose bushes featuring the red, white and pink blooms of the original color scheme. 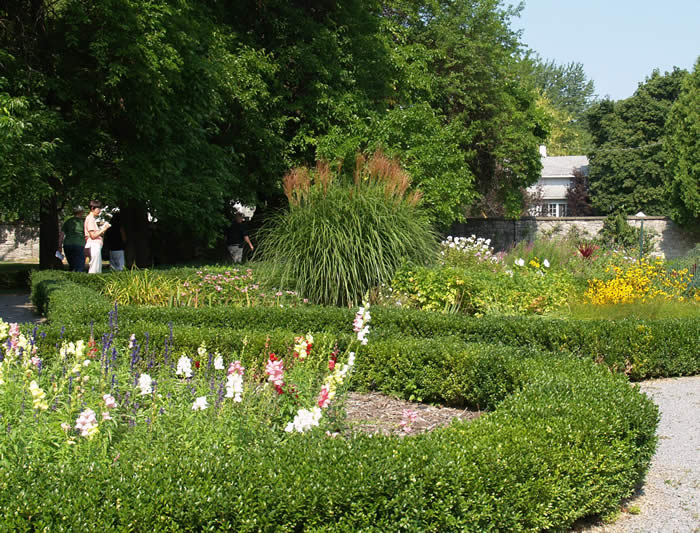 The Old Fashioned Garden, also 1906, consists of five intersecting circles with a columned arbor bisecting the fifth circle. Beds filled with a mind-boggling array of perennials – verbenas, red coxcombs, marigolds, lilies, phlox, dahlias, asters, and more – along with colorful annuals and tall grasses insure that, early spring through fall, the garden would be in bloom.

1906 was a busy year in which the Japanese Garden, overseen by a Japanese artist known as Wadamori, was also completed. On five acres of land, in but six months a detailed landscape reminiscent of mountainous Japan was constructed. Water flows beneath five bridges, a 12th century Buddha sits nearby, a tea house awaits a tea ceremony. No flowers, save for pond lilies, interrupt the shades of green in trees and shrubs, emphasizing the gray tones of stone lanterns and priceless statuary. 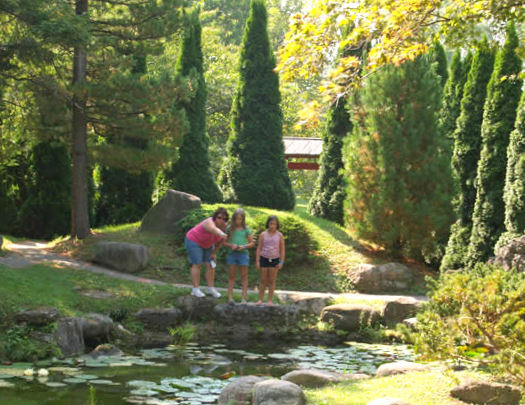 The 1907 Sub-Rosa Garden, conceived to be a secret garden, was so secret that I had difficulty finding it. Encompasses with dense, green foliage, “so compact a cat could not get through,” it is today a favored spot for small weddings. The garden’s centerpiece is an intricate marble fountain and bench on a raised platform above a deep pool.

The Blue and White Garden, 1912, is Sonnenberg’s daintiest garden and said to have been Mary’s favorite. Built under a sheltering wing of the house, only blue and white blossoms are featured – sweet alyssum, white campanula, delphinium, belladonna, lobelia, larkspur.

Beyond the Blue and White Garden I found the 1913 Pansy Garden with its bird path reflecting what is reported to be Mary’s favorite flower. An informal garden filled with thirteen beds of pansies, the only formal note is a six-foot fountain of gray marble.

The 1914 Moonlight Garden is separated by a tall hedge from the Pansy Garden. A tiny spot, by Sonnenberg standards, it is dressed in naught but white and silver. Sweet aromas of heliotrope, tuberoses and verbenas enhance the garden’s ethereal appearance when viewed in moonlight. 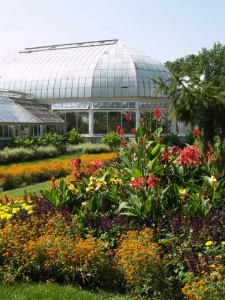 The Rock Garden, 1920, was Mary’s last. Sonnenberg’s largest complex it was built when no rocks were closer than 30 miles away and encompasses two former gardens. A rustic summerhouse has the original climbing hydrangea that winds along the stair to a lookout space. A winding path traverses what was once called the Wild Garden, traveling through a limestone canopy of solid stone. The last addition, the former Lily Garden, features a water cascade and series of pools below unpretentious five acres of woods.

Between 1903 and 1915 fifteen greenhouses were built – a greenhouse devoted solely to grapes, a greenhouse for tree-climbing melons, greenhouses designed to house flowers, vegetables. palm trees, ferns and orchids. Five today are open to the public, representing the few remaining intact wood and glass Lord and Burnham greenhouses in the United States.

A garden no longer for the elite …

I finished my Sonneberg visit, I wondered if Mary Thompson Clark envisioned her gardens beyond that of providing pleasure and beauty for the few, invited, elite of the Gilded Age. Wittingly or not, nearly 100 years later, the beauty and pleasure of her gardens continues – but now for the pleasure of the everybodys of the world who find their way to Sonnenberg – everybodys like me.