Macau – a tale of two gardens

Macau – a tale of two gardens 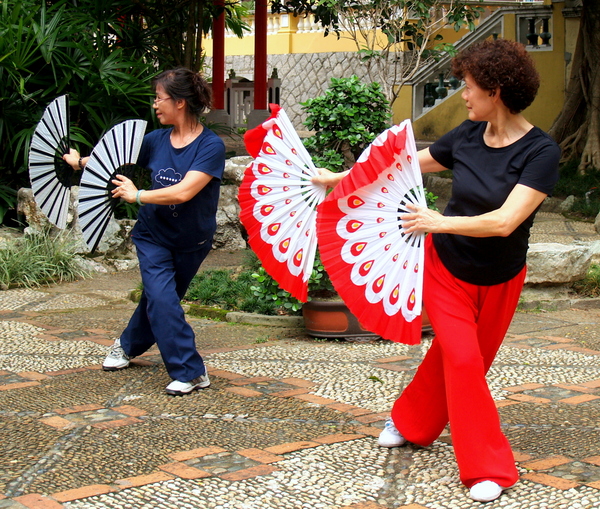 CHINA Macau – It was morning exercise for the two women. For me, it was Chinese ballet performed for an audience of one, the movements as classical and timeless as the setting in which they were performed. 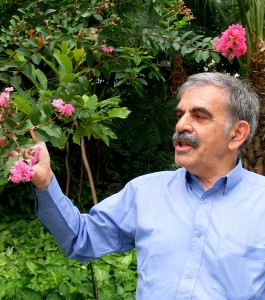 I was waiting in the courtyard of Lou Lim Iok Garden, where I’d arranged to meet Antonio Saraiva. Saraiva is a landscape architect who, before his recent retirement, held responsibility for the maintenance of all of Macau’s public gardens. Saraiva had volunteered to show me about.

“Today the garden is but a fraction of the size it was at the time of its greatest splendor, the mid 1920s,” he told me, “yet all the elements of the classical Chinese garden are here.”

The garden had its beginning around 1860, when Lou Cheok Chi, a wealthy merchant, oversaw the construction of a lavish villa surrounded by a large, walled garden. With his death, the property passed to his two sons. In time, portions of the land were sold; a school occupied the villa. In 1972, the seriously deteriorated garden was slated to be sold. 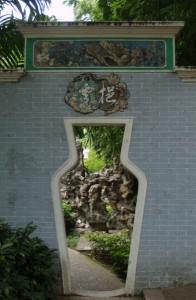 “In a last-ditch move,” Saraiva said, “what remained of   this  Chinese landscaping gem was saved and renovated. In 1974 it opened to the public.”

As we entered the main part of the garden through an open doorway shaped like a jar, Saraiva talked of the necessary presence of “yin,” feminine, and “yang,” masculine, in a classical garden. “With but one, there is death,” he said. “When both are present, there is life.”

He pointed out, for example, that rocks intricately pieced together to simulate mountains, caves and even animals are yang. Lakes and empty spaces represent Yin.

“But look, the rocks must have some holes and the lakes, islands. As if the masculine needs some delicacy in order to completely understand and the feminine, bravery, to endure.”

Lou Lim Iok Garden, like all such Chinese gardens of its time, was intensely lived in by its owner, the women of his household (his first wife and concubines) and children. It also was a place of hospitality, where friends and business contacts gathered to enjoy Chinese opera, grand parties and quiet strolls through a setting of nature re-created in miniature with lakes, waterfalls, mountains and forests.

“With so much going on — people and geography — in the limited confines of the garden,” Saraiva noted, “a sense of distance, depth and space was incorporated.” 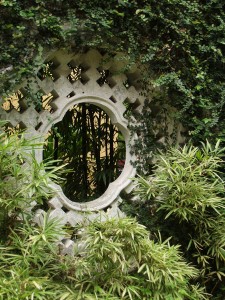 He pointed out encompassing walls swathed in greenery to hide the garden’s edges and enhance connection to the outside world; paths that rose and fell so as to be perceived as covering greater distances than if flat; garden areas, separated by stone walls, glimpsed at through intricately shaped “windows,” giving an impression of a distant view, and routes designed to lead through small spaces into more spacious areas that, by contrast, appeared even larger than they were.

As we strolled, Saraiva commented on certain species of plants that must be incorporated into a classic garden. Among them, the “Three Good Friends in Cold Winter,” representing courage in adversity. He explained: “Pine trees hold their leaves throughout the difficult season. Plum trees blossom. Bamboo shows strength of character and perseverance, returning upright after bending.”

Orchids, too, are important, I learned. Flourishing in tucked-away places, they symbolize modesty. Most important, however, is lotus.

As we crossed The Bridge of Nine Curves over a lotus-filled pond, Saraiva and I paused as he explained the plant’s value in Buddhist culture. 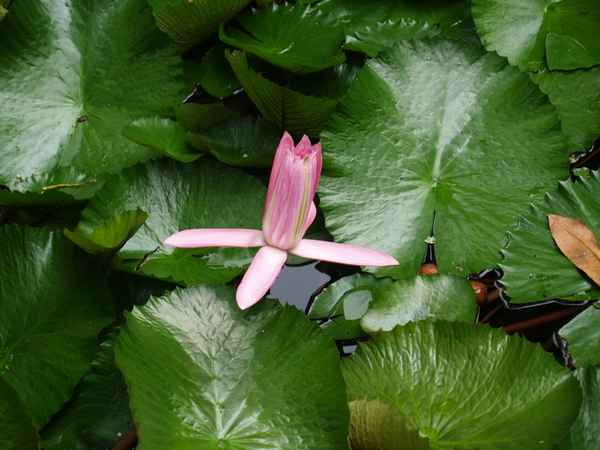 “Born from the mud, it emerges from the water clear and clean, a symbol of absolute purity.”

I would have been happy to spend the better part of the day wandering Lou Lim Ioc’s serenity with Antonio Saraiva. My guide, however, had another garden to show me, Luís de Camões Garden. 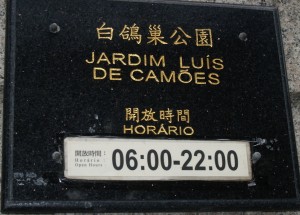 “In Macau, two very different civilizations coexisted and interacted for over 450 years: European and Chinese,” he told me as we drove through Macau’s busy city streets to Camões’ hilltop expanse of greenery. “Lou Lim Ioc illustrates the Chinese side. Now you are about to visit its European.”

Macau’s duality of cultures dates back through the centuries to the early 1500s with the Portuguese sailing into the city’s Inner Harbour. . . and staying. Their tenure ended quietly in 1999, two years after the British handed control of Hong Kong back to China.

The garden — once a walled enclave — includes the grand villa (now the Casa Jardim museum) of its Portuguese owner, Manuel Pereira, a man of wealth who arrived in Macau about 1780. Pereira later leased the property to the British East India Company as a place of residence for the company’s president, John William Roberts. 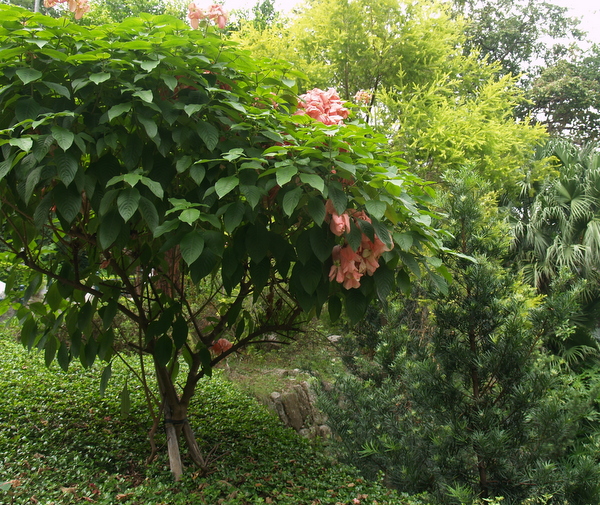 Roberts is largely credited with creating the quintessentially English garden that it is today, the garden benefiting from the grand era of plant explorations enjoyed by the English at that time.

Specimens collected in the wilds of Asia were brought to the garden, where they were cared for in a nursery awaiting shipment to the Royal Botanic Gardens at Kew. Many found a permanent home in the garden. The nursery, still fulfilling its original purpose, continues to exist near Camões’ main entrance.

“Unlike at Lo Lim Ioc,” Saraiva said as we entered the garden, “in an English garden nothing is enclosed.”

Grand vistas of the garden and city beyond greeted us at every pathway turn as we walked a garden of mature greenery, from tall palms to groves of rhododendrons.

Atop a wooded hill in a rocky alcove, we came across the bronze bust of Luis de Camões, the famous 16th-century Portuguese poet for whom the garden is named. There he completed his epic “Os Lusiadas,” chronicling Portugal’s globe-girdling explorations.

“It’s both wonderful and amazing,” Saraiva commented, “that this property of about three hectares (about six acres) has remained undivided and not built on for over 200 years in a city where land is so scarce and expensive.” 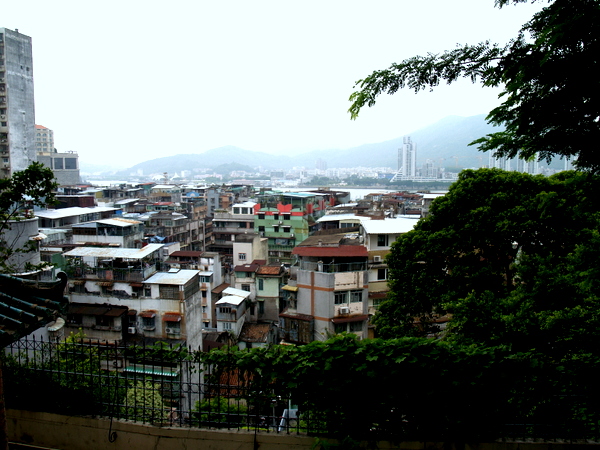 At one time, the Inner Harbour lapped at the garden’s feet. Today, landfill has created a jam-packed Chinese neighborhood of multistory dwellings.

It became evident to me, as we walked along, that Camões’ spacious greenery is treasured by the people of Macau as a refuge of serenity, recreation and socialization. A rehearsal of Chinese opera was going on under the shelter of a pagoda, morning exercise under another. Joggers passed us on the path, elderly men “walked” their caged birds, and card games and checkers went on at tree-shaded tables. 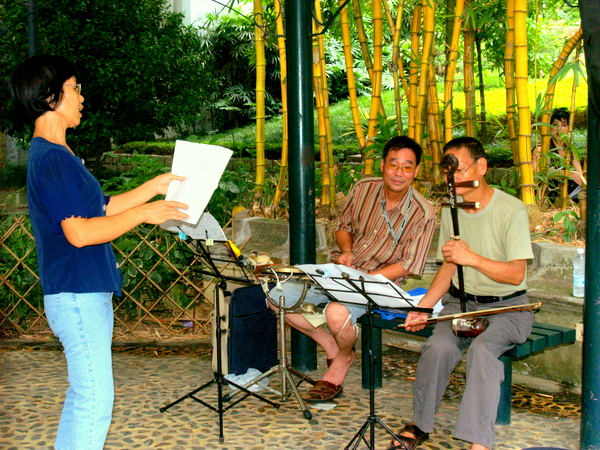 “People think of buildings, museums and monuments as places to learn about the history of a place,” Saraiva said. “But, as we’ve seen today, we should not overlook gardens as places that can tell us much about the past.”