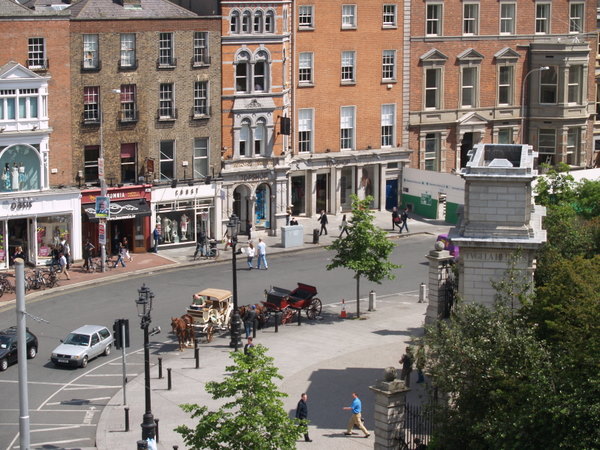 In the glass house, long tables of rose, yellow, white and red polyanthus share space with wallflower in shades of scarlet and gold. Pansies are well represented – white, yellow and blue. Hyacinths are poking forth, destined to add their jewel tones and fragrance to the borders. 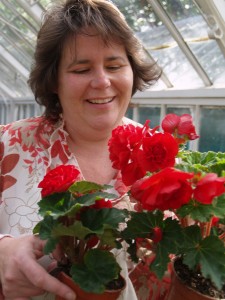 All are synchronized to be in the ground and come into bloom precisely when beds containing hundreds of tulip bulbs are in full flower. “Ah, the Green is well-known for its tulips,” Gormley comments. “All of Dublin turns out when the tulips are in bloom.”

A green since medieval times …

Dublin’s love affair with St. Stephen’s Green dates back to medieval times when it was a marshy commons on the edge of the city.

In 1664, as a means of raising revenue, the center of the Green was walled and building lots were sold around its edges. Clearly stated was that the center would remain “wholie kepte for the use of citizens and others, to walke and take the open aire, by reason this cittie is at present groweing very populous.”

Through the centuries “citizens and others” have freely used its 22 acres, save for a period beginning in 1814 when the city, again lacking funds, locked it up. Keys were sold to the residents of the fine Georgian houses that now graced its perimeter. So it remained for over sixty years.

Lord Ardilaun, chairman of the Guinness brewery, grew up in one of those fine keyholder houses and retained fond memories of visiting the Green with his nanny. Believing it not right that but a few could enter, he bought out all the keys and embarked on three years of extensive landscaping. In 1880, with the Green emerged as a Victorian Park, he presented it to the city. St. Stephen’s Green, once again, was open to all. 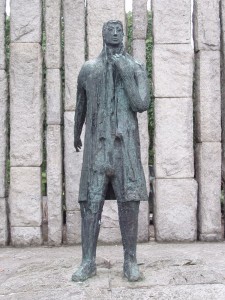 “The garden’s philosophy is to remain faithful to the Victorian period,” Gormley comments, adding that in the 1960s and 70s it began to loose its way, most notably with the introduction of massive contemporary sculpture. One such is of Wolfe Tone, a leading light in the United Irishmen Irish independence movement, whose stark representation is backed with slabs of granite. “Tonehenge, ” fast-witted Dubliners quickly dubbed it.

By contrast, the remainder of the Green’s acreage is largely a subdued collection of noble trees and mature shrubs tied together by meandering paths and herbaceous borders. There are great expanses of lawns, tucked away small ones, a large lake fed by a waterfall and crossed by an arched bridge, and a bandstand where live music attracts throngs for summer concerts.

It also claims a house, a Queen Anne that looks all the world like a storybook escapee. By an 1880 act of Parliament, it is here that park superintendents are required to live. In 1993, Gormley moved into the house as a single person; it now is home to a family of four. Besides living in what amounts to a fishbowl, an architectural oddity of the house, which was designed as an aesthetic feature of the park with lesser thought to livability, are rooms that don’t line up with windows. 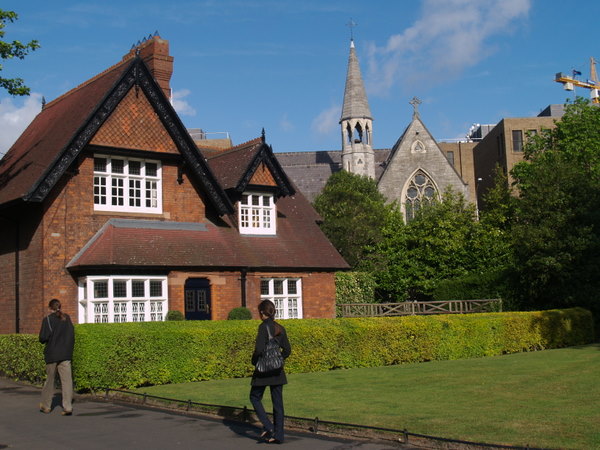 A day at St. Stephen’s Green begins at morning light, when gates open, with joggers and speed-walkers waiting to enter what Dubliners call “the lungs of the city.” Soon the Green bustles with briefcase-carrying office workers taking shortcuts to their places of business via corner-to-corner footpaths. By nine o’clock elderly citizens are claiming bench space with some, according to Gormley, settling in to spend the day observing the ever-passing parade. Mid-morning introduces perambulators, youngsters chasing ducks around the lake and the first of hundreds of tourists wandering through. 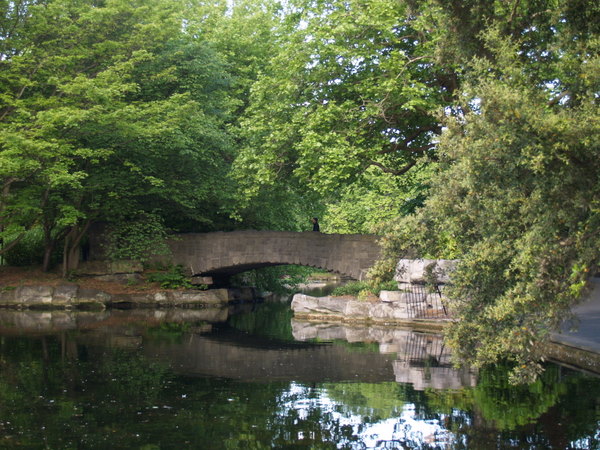 At the entrance arch facing Grafton Street, a busy pedestrianized way, horse-drawn carriages wait to take sightseers on a clip-clop tour around the square. A street performer takes advantage of noontime traffic into the park to reenact the character Dubliners refer to as “the Tart with the Cart” – known to the rest of the world as sweet Molly Malone “selling cockles and mussels alive, alive-o.” 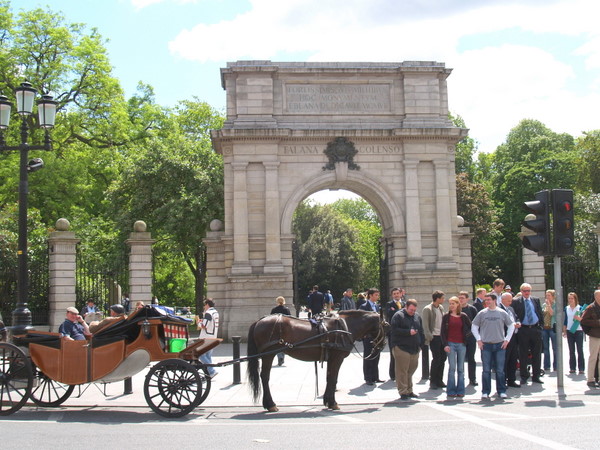 Lunchtime, on sunny days, ensures that every square foot of lawn is occupied by brown baggers. “All of the Green’s lawns are open for day-long lounging, except for that in the central area,” Gormley says, adding that the sit-anywhere-you-like policy creates a bit of a problem when it comes to finding lawns uncluttered with people so that grass can be mowed. 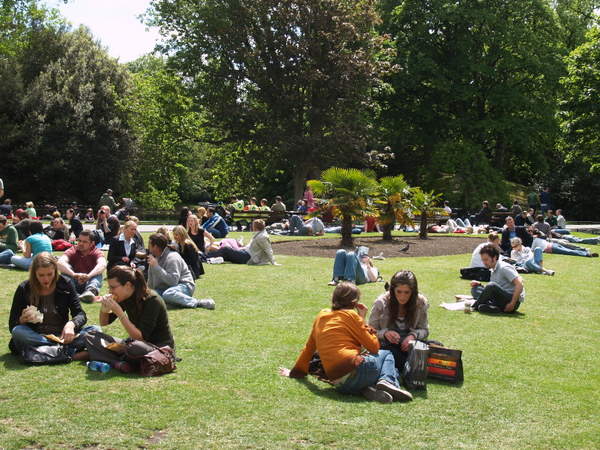 “The park is maintained to high standards,” she adds. “Lots of money is invested into keeping it well tended 365 days a year. And in making certain that it’s a safe and comfortable place to be. St. Stephen’s Green is not only a place of pride for Dublin but but the entirety of Ireland.” A popular song goes: “Dublin can be heaven with coffee at 11 and a stroll around St. Stephen’s Green.”

The greens day ends at sunset …

Strolling ends at 20 minutes before sunset when a clanging hand bell is carried through the park announcing that the gates are about to be locked for the night. Thus ends another day in the life of Dublin’s beloved St. Stephen’s Green.

The Green is a lung for the city,

The Green is a place to walk and think,

And sit and listen to the poets being witty, 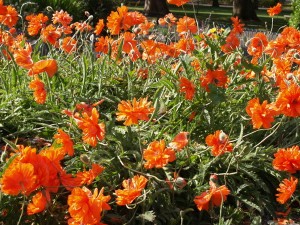 STAYING IN THE NEIGHBORHOOD: