CROATIA Lopud  – There were three possibilities: I was waiting at the wrong harbor, had drastically misunderstood the ferry’s schedule, or was the sole person bound for Lopud. The bench at the ferry departure dock was mine alone, with no other passengers in sight.

Ah, a ferry, a small-sized member of the fleet that ties the islands and mainland of Croatia together, rounded the bend. Right on time, according to the schedule to Lopud.

With that, passengers streamed out of nowhere, shoving, elbowing to be first in line, jostling luggage. Had all of sweltering, swarming Dubrovnik suddenly decided that it was too hot, too crowded with tourists this August day to stay in town? With a toot of the horn, off we went with every inch of space inside and out occupied with standers and sitters. The headline ran through my head: “Local Ferry Overloaded with Passengers Capsizes in Adriatic.”

Escape from Dubrovnic, the heritage walled city – a place that in other seasons is a highpoint of any visit to Croatia – was but one reason I’d chosen to head for Lopud, the middle island and second largest of the Elafiti archipelago, located nine kilometers off shore. The other reason was a garden established in the late 1800s – a garden so important that its creation influenced Dubrovnik’s garden tradition; a garden gone neglected through two World Wars and communist rule; a garden newly appreciated and, with volunteer help and guidance from Dubrovnik’s Office for Historical Gardens, emerging from decades of botanical tangle.

A stop en-route at the island of Kolocep, brought relief to the overloaded vessel. Ahead lay the Bay of Lopud with its picture-postcard waterfront lined with villas and sidewalk cafés against steep hills.

Now a sleepy, idyllic getaway for Dubrovniks and tourists, it is hard to believe that Lopud was once the regional headquarters of the Republic of Dubrovnik and considered a superb example of 15th and 16th century urban planning. According to 16th century historian, the Dominican Serafino Razzi, author of the first printed history of Dubrovnik, Lopud had its own fleet of some 80 ships and its own shipyard, 30 churches, several monasteries, and a vast number of sea captain and aristocracy-owned summer villas. A population of some 4,000 lived on the island’s two-kilometer by five-kilometer expanse of hills and valleys.

Today but 200 or so call Lopud home. The island comes to life in spring, with the first arrival of vacationers and day-trippers there to fish and swim in the Adriatic’s crystal-clear waters or simply claim a table on the promenade and watch the passersby. With the first rustlings of fall, Lopud is all but closed down. It is only when one learns of low-key, pedestrian-only Lopud’s important past that the existence of the garden makes sense.

Gjorgjic-Mayneri Park, as the garden is known, was created next to the 1494-built summer villa of the noble Dubrovnik family Gjorgjic by Count Felice Mayneri, a Venetian who’d married into the aristocratic clan. The villa is of modest size, with Mayneri making the decision not to invest heavily in a sprawling, luxurious home but instead surround it with gardens in which, as Mayneri declared, “spirits could soar.”

Built on a rise directly on the bayside promenade, the five-acre garden was constructed on two levels – the lower level situated directly 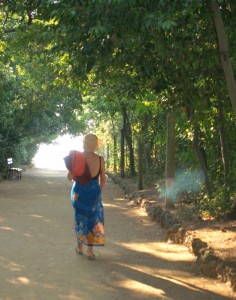 behind the villa, the upper level to one side. Although its purpose was pleasure and relaxation, it was meticulously planned and architecturally designed. Nothing was left to chance. Waterfalls were placed to tumble into little streams; numerous stone platforms were outfitted with benches placed facing the sea. Pathways echoed the curve of the bay, making their way through archways embedded with broken shells.

Eucalyptus, cedar, palms, and oleander joined the olive trees from the orchard that had originally inhabited the site. Exotic specimens were prized and planted, as was the fashion of the time, gathered the world over. Many arrived as gifts from those invited to the villa.

The villa is now a boutique hotel, La Villa, renovated in the 1980s and newly appointed in 2004. The lower level of the garden has been walled off to become the hotel’s private space. Here, all manner of herbs and citrus trees keep company with an ancient, enormous magnolia. 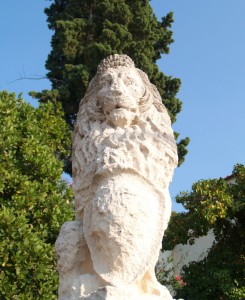 Stone lions guard a stone stairway to La Villa’s left. Paths lead under towering trees into the garden proper. Despite the on-going clearing out of the overgrown, it takes a squint of the eyes to appreciate what the garden once was. Nevertheless, it is a delightful place to wander, deliciously cool under the mid-day sun. Paths and rock-edged planting areas lead to more paths and planting areas with weatherworn pieces of sculpture along the way. Dogs are walked, joggers jog, volunteers water and weed. So fascinating did I find the garden, that I returned to the garden time after time in my three days spent on the island.

And then it was time to leave. Again I was alone on the pier, wondering if I’d got the return schedule wrong. But no, just as the ferry entered the bay, suddenly all the day-trippers and returning vacationers were there jostling for position in line.

TO GO: During the season, four ferries a day service Lopud from Dubrovnik’s Port of Gruz. Visit  www.lopud.eu   for island information.