Walking the ring around Leipzig’s history

Walking the ring around Leipzig’s history 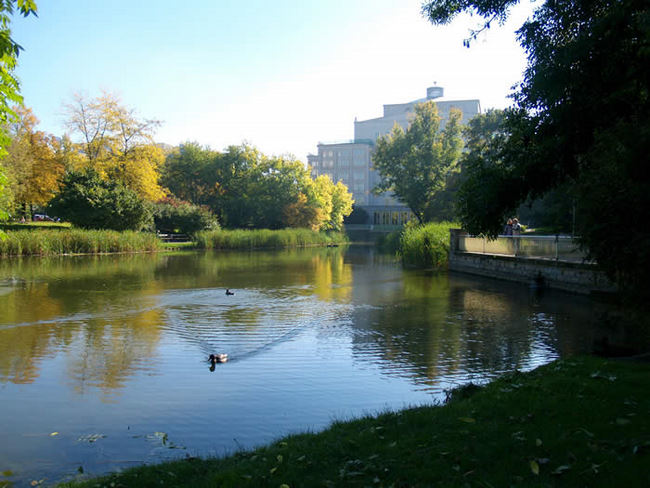 GERMANY Leipzig – “I’ll tell you all about the monuments as we go along,” Sylvia Kolbe suggested as we set out to walk what was once the city of Leipzig’s fortified walls and today is the Promenadenring, an encircling ring of leafy, sometimes flowery, greenery. I’d requested a City Guide knowledgeable not only about the city but about plants and gardens. Sylvia was perfect –not only is she a Leipzig resident with long generational ties to the city but one with a love of gardening inherited from her great grandparents who claimed space in a Leipzig allotment garden where Sylvia and her family “farm” today.

With but two hours to walk the paths of the circle, hearing all about the monuments was not what I had in mind. Little did I know that without an understanding of those encountered along the way, the circle of leafy sometimes flowery greenery would have remained just that. Instead, with Sylvia by my side, I became acquainted with Leipzig’s past and present as an important cultural center that has always embraced a dynamic willingness to embrace change.

Like most European major cities, Leipzig in the 18th century was surrounded by massive fortifications and a moat. Early in the 1700s, it became increasingly evident that advances in military technology were making the ancient means of protection obsolete. The Seven Years’ War (1756-1763) underlined the uselessness of fortifications. With that, Leipzig became one of the first German cities to go about ridding itself of its confining wall.

An early forerunner of what would later become part of the gardened Promenadenring was planted in 1725. Quickly it was dubbed the “Muhmenplatz” for the number of Muhme (nannies) who strolled its pathways with their charges. 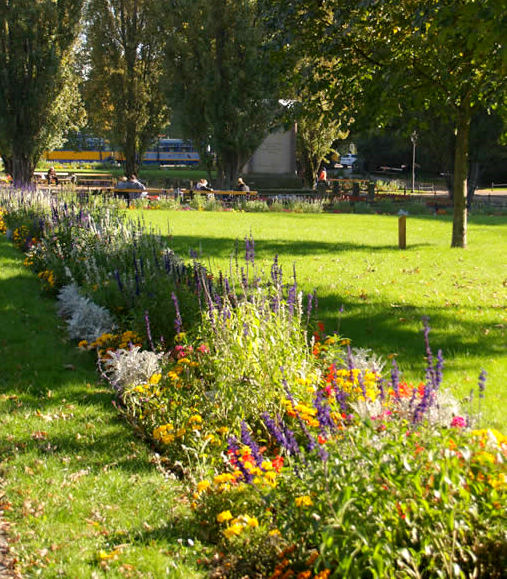 Sylvia and I began our walk at the site of the Promenadenring’s first section, a garden constructed in 1784 under the direction of Leipzig’s mayor Carl Wilhelm Muller – and, yes, a monument stands in his honor. Some 250 of the city’s poor were employed to move the earth from the fortification’s embankment to fill in the space that was once the moat. Men earned the equivalent of 30 cents a day; women were paid 20.

The garden was created in “English style,” one of tree-shadedartificial naturalness with flower-edged winding paths. “Such a garden was a first for Germany and quickly became one of thecity’s most important sights,” Sylvia told me, adding that it was much smaller now than that orignally designed, thanks to the encroaching 1915 construction of Leipzig’s Central Station, which remains today Europe’s largest terminal rail station.

“Now comes my favorite section,” Sylvia commented as we walked through a tree-shaded allé of Lindens with the city seemingly far away. “A pond was created from the moat. See, there are the swans, floating as they did on the moat in the 16th century.” The southern end of the pond greets Leipzig’s Opera House. Opened in 1960, it is on the site of the 19th-century “New” Theatre that was destroyed during World War II. A portion of the building’s façade, a line-up of Greek gods, is presented as a piece of path side sculpture.

We enter the Augustusplatz, once considered one of Germany’s most beautiful squares. With influential buildings surrounding it lost to World War II bombs, it is today a hectic intersection crisscrossed with traffic. One feature remains – at its center, a 19th-century Roman-style fountain of heroic figures and winged horses edged in a colorful wreath of tuberous begonias.

Our path takes us to the university quarter; Leipzig’s lively student enrollment adds some 32,000 to the city’s resident population of just under 500,000. Here, looking down into what was once the moat, a section of the fortified wall can be seen. In the moat – a coffee house. Opposite, Leipzig’s tallest building soars heavenward. Built in the shape of an open book, locals quickly nicknamed it the “Wisdom Tooth.” 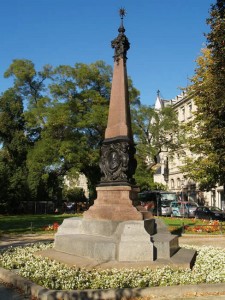 Walking in the shelter of Linden and chestnut trees, we come to an obelisk standing in a bed of white fibrous begonia. “It’s dedicated to the Ratsfreischule,” Sylvia identified the monument. The Ratsfreischule was a new educational idea at the time, a school that allowed the children of the poor – both boys and, notably, girls – to attend free of charge. Those who could afford the tuition paid. The obelisk, dated 1894, marks the school’s 100th anniversary. Once a mill operated in this section of the ring; the only remnant of its presence a large millstone exhibited like a piece of sculpture in an ivy-edged courtyard.

As we walk along, we talk of Leipzig’s musical heritage. Few cities of the world have a musical history that can match Leipzig’s. Names such as Johann Sebastian Bach, Edvard Grieg, Gustav Mahler, Felix Mendelssohn Bartholdy, Robert and Clara Schumann, and Richard Wagner are inseparably linked to the city. Alas, the original Mendelssohn statue that once graced the Promenadenring was destroyed by the Nazis, who also banned his works, citing his Jewish origin. In 2008 a new statue was erected near the Church of St. Thomas where our path will take us. 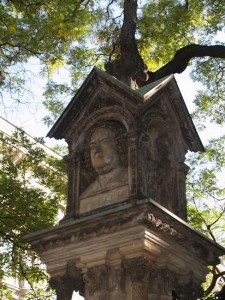 Mendelssohn – a great admirer of Johann Sebastian Bach, who served as the city’s musical director until his death in 1750 – feared that Bach’s acclaim had diminished in the passing of nearly 100 years. Accordingly he had a monument erected in his memory. It stands today surrounded by a square of perennial flowers, steps away from the fine Bach museum.

We come to the Runde Ecke, the “Round Corner,” where a stately building housed the East German secret police, Stasi. The building now contains a museum that documents the Stasi era of terror in which citizens were pitted against citizens. From their windows, the Stasi witnessed the beginning of the end for the German Democratic Republic. On October 9, 1989 some 70,000 Leipzigers staged a peaceful march, kicking off the movement that led to the reunification of west and east Germany.

Now our path borders Richard Wagner Strasse and I say goodbye to Sylvia Kolbe in front of the Central Station where our walk began. We look at our watches – in exactly two hours we’d covered over 200 years of Leipzig’s dynamic, cutting-edge history, proudly documented in the monuments along the Promenadenring’s leafy, sometimes flowery, greenery.