CALIFORNIA Napa – Forty years ago Donn and Molly Chappellet arrived in California’s Napa Valley with five, soon-to- be-six, children in tow and a dream of creating world-class wines. Quickly they learned why stone was the material of choice for so many of the valley’s buildings. A volcanic eruption four million years ago had spewed the region with rock. It appeared that Prichard Hill, the property their dream purchased, had been a major recipient of nature’s violence, gifting it liberally with stones, rocks and incredibly massive boulders. 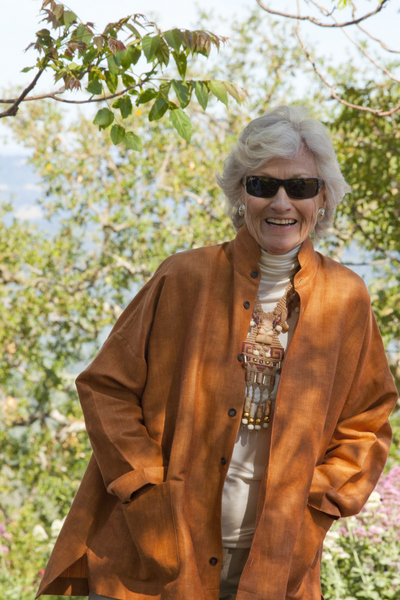 Great wines, however, reflect the often difficult character of their vineyards. Pritchard Hill’s  terroir of rocky, thin volcanic soil is hailed as “Napa’s Grand Cru” and recognized as a revered site for Cabernet Sauvignon. So diverse is the property, sculpted by a millennia of erosion, water and wind, that Chappellet’s  portfolio also includes exceptional Merlot, Cabernet Franc, Chardonnay, Chenin Blanc and a highly regarded Mountain Cuvée Blend. 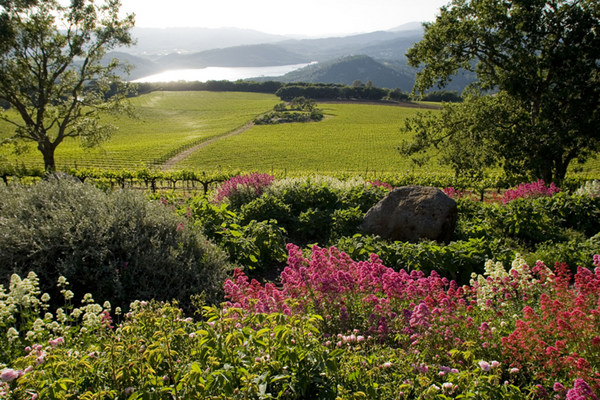 While the planting of grapevines laboriously moved forward,  Molly Chapellet’s idea of creating a manicured garden retreated into fantasy the first time her shovel hit rock. With that, her background as an artist came fore.

Pritchard Hill  includes  acres of  wild woods dense with big leaf maples, species of California oaks, madrone, manzanita, toyon and ceanothus.  Perched at  1700-foot elevation, views encompassed distant mountains piled upon mountains with the teal-colored waters of Lake Hennessey and Mother Nature’s perfect thumbprint, the Napa Valley, far below.  “Looking about, I realized that everything in sight was my garden,” she says, “including the massive boulders ever emerging as areas for grapes were readied.” 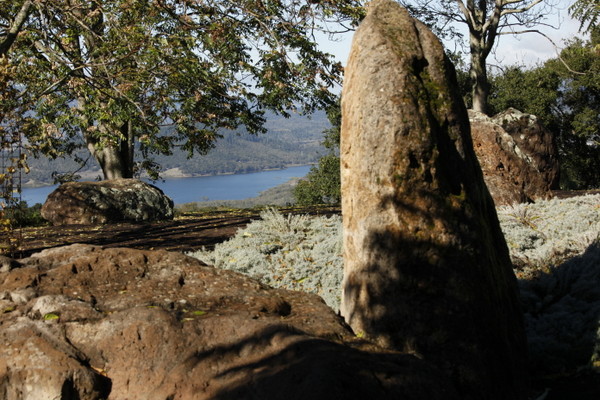 Yet,  there were practicalities to be addressed. The rambling ranch house that came with the property desperately needed shade from Napa’s searing summer sun.  “When a seedling appeared in front of the house,”  Molly recalls, “I could barely contain myself when a local nurseryman advised me ‘Get rid of it now! It’s ailanthus, grows fast and its seeds will take over the place.’ Shade!  Without a shovel!”

More shade than that from the seedling ailanthus was needed.  To plant additional trees, truckloads of rock had to be removed. Organizing her  teenage children into what she calls a “chain gang of unwilling volunteers”, the task went underway.

Now,  with children grown and fewer mouths to feed, Molly intersperses vegetables with plants not destined for the kitchen, again with an eye to texture and color – a rounded gray-green cabbage next to a tall, purple salvia. 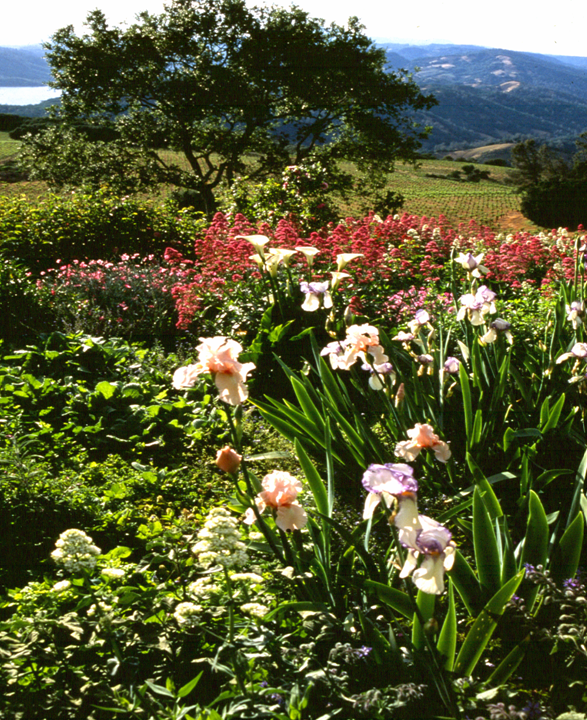 As the years passed, Molly carved out more gardens reached by curving paths covered with woodchips, dried grape pumice, and river-washed pea gravel. An oak’s green canopy invited a small garden where one might sit and contemplate the view. Others came about because of happenstance; when the sod roof of the stone wine cellar fell in, the small interior became an open-to-the-sky, vine-wallpapered sanctuary, its massive wooden door flung open to frame the vista beyond.  A family wedding celebration inspired Alexa’s Path that wanders  under four vine-covered archways – the first three draped in Perletta grape, the last with a Mandevilla laxa’s fragrant white blooms – to a ceremony site  in the shelter of an ancient oak.  A “white garden” borders the path – white carpet rose, oxalis, gaura, phlox.

Throughout her garden, Molly welcomes “volunteerism” with the same enthusiasm she greeted her “volunteer” teenaged chain gain. “Plants have minds of their own,” she says,  “appearing on their own volition.  They seem to know where they’ll do best – feverfew, cleome, borage everywhere, rockrose, and over there an entire spring carpet of johnny-jump-ups that jumped here on their own. Unless really in the way, I leave them alone.” 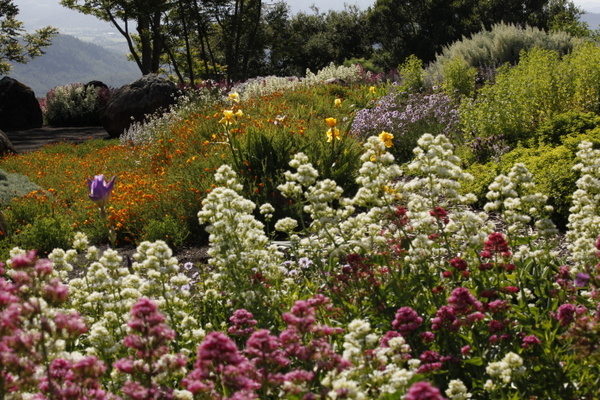 Other gifts of nature are also welcomed. Insects, seed-dropping birds, even the occasional rattlesnake finds space.“If we come across a rattler coiled under a cabbage,” Molly says, “we simply nudge him toward the vineyard and suggest a gopher lunch.”

The volcanic eruption four-million years ago continues to offer enormous boulders as vineyards are reworked.  Many are left, pushed aside, to take their place in the larger, wild garden. Others, such as the pair Molly has dubbed Tristan and Isolde, are positioned just so in the cultivated garden.  Those conveniently flattened on one side become benches, picnic tables.

“The boulders and I have developed a very personal relationship through the years,” Molly says, “evolving from initial frustration to complete captivation by their sheer beauty. I can’t think of a single object that can rival their splendor and durability.”

So they remain, gifts from the distant past, glorious pieces of sculpture magnificently punctuating the tapestry of Molly’s Garden .

All Photos Courtesy of  Chappalet Winery