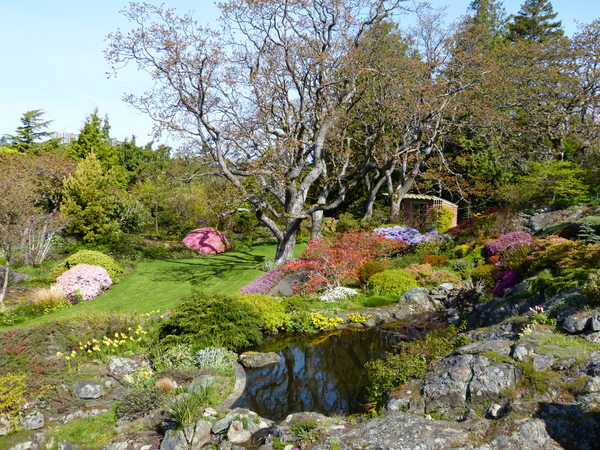 CANADA Victoria – As I wander the world admiring trees, blossoming shrubs and flower-filled beds, the gardens I remember best are those with stories to tell. Winning hands down for most romantic tale is a quiet garden in a leafy residential section of Victoria, British Columbia: Abkhazi Garden.

The story involves a Russian prince, Nicholas Abkhazi, escaped to Paris in the wake of theBolshevik Revolution, and Peggy Pemberton-Carter, adopted daughter of a wealthy, well-traveled,British couple living in Shanghai. Peggy, aged 20, and Nicholas, a bit older, crossed paths in Paris and became friends, a friendship squelched by Peggy’s domineering mother. “He may be a prince, but he’s a pauper,” she said, and whisked Peggy back to Shanghai.

Years went by. When Peggy’s adopted mother died, she began to create her own life, a life soon short-circuited by the Imperial Japanese Army takeover of Shanghai. Peggy became a prisoner of war. Meanwhile, as Germany marched into France, Nicholas, too, was imprisoned.

World War II’s end also marked the end of Peggy’s Shanghai life. Funded with a small fortune in travelers checks that she’d managed to hide in the bottom of a talcum powder jar during her two-year internment, Peggy sailed for Britain, planning an en-route stop-over in Victoria to visit friends. And there she stayed.

A favorite walk of hers passed by a vacant piece of property on the, then, edge of the city. No matter that its location at the end of the streetcar line had allowed it to become a public dumping ground, its landscape of granite outcropping afforded magnificent panoramic views. When it came up for sale in 1946, Peggy bought it.

Increasingly her thoughts began to return to Nicolas and the time they’d spent together so many years before. Had he, too, survived the war? Letters to mutual friends told her that, yes, on release from the German encampment he’d returned to Paris. The two began to correspond, agreeing to meet in New York.

So began what was to be their more-than-forty-year life together, about which Peggy is quoted as saying, “We met again, we married, we lived happily ever after — and we created a garden.” 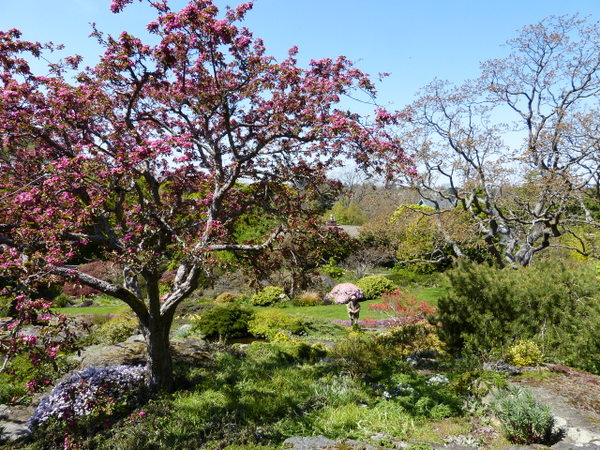 Abkhazi Garden, as viewed from the home now turned visitors center and tearoom.

A greeting at the garden gate …

Jeff de Jong, head gardener for the property now owned by The Land Conservancy, greeted me at the garden gate.”
“Neither Peggy or Nicholas were gardeners,” de Jong told me as we entered a woodland path adjacent to the gate. “And neither were young  when they set out to create this garden. Any experienced gardener at their age would have said, ‘Maybe we should buy a condo in town and visit gardens’!”

It was via this woodland path that the Abkhazis always introduced their visitors to the garden, de Jong told me, as on this May day as we  wandered by gloriously blooming rhododendrons grown to giant size in the sheltering shade stands of native Garry Oaks. Under-plantings of azalea, wood anemone, bleeding heart, winter aconite, hardy cyclamen, ferns and hostas enhanced the woodland theme. 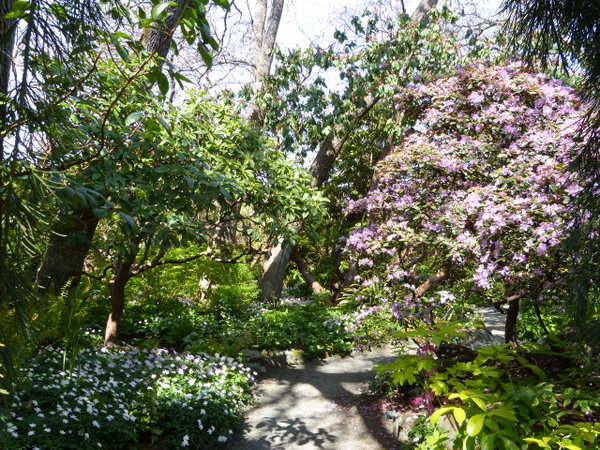 The woodland path introduces visitors to the garden.

The path emerged on a curving sweep of sunny lawn flowing the length of the property, a calm and serene horticultural bow to Peggy’s Shanghai days, symbolic of the Yangtze River. A long stretch of agapanthus emphasized a feeling of movement while a mixed border of plants chosen for foliage, texture and color added interest along the way. 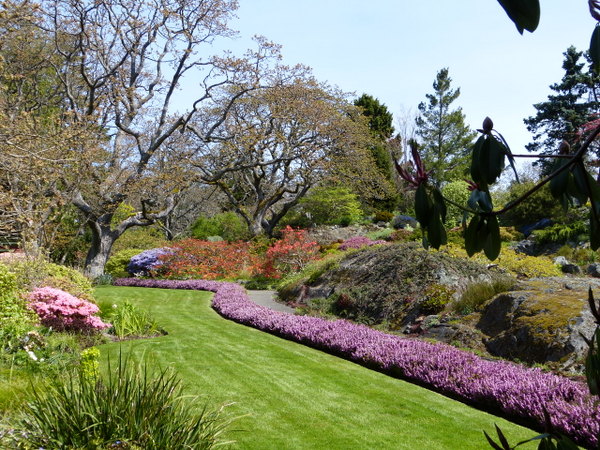 Tulips were plentifully represented, unusual varieties chosen by de Jong. “I’m Dutch,” he said. “A springtime garden has to have tulips!”  None were planted, however, until an archive search revealed that the Abkhazis advocated the addition of tulips to the landscape. 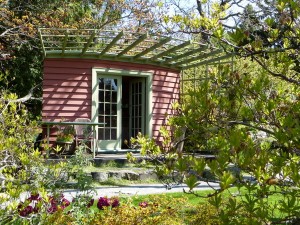 A charming summerhouse, the first structure built on the property, marked the end of the “river.”

Stone paths provided detours from the lawn into enormous rock formations where ponds created from natural depressions provide homes for resident turtles and families of mallard ducks. From there, the garden continued to flow through glaciated rocky slopes, with plants, including 50-year-old Japanese maples grown to impressive maturity, flourishing in pockets of soil. 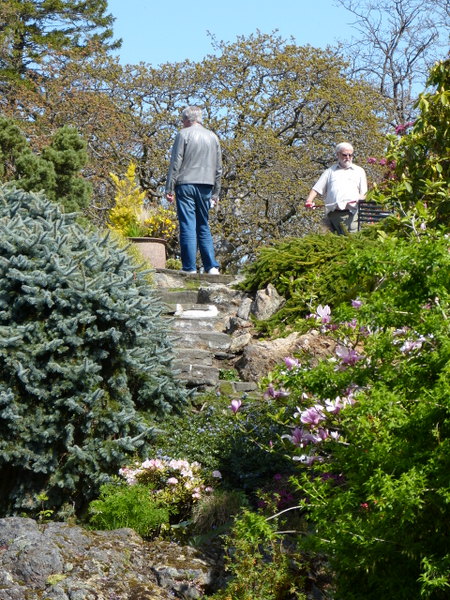 A sweeping view of the garden and beyond …

At the top of the property, the entirety of the garden sweeps below, revealing how massive granite outcroppings had been utilized to frame the distinctive “rooms” that not only surprise as one comes upon them but create the sense that the garden is much larger than its one-acre size.

It is here at the garden’s highest point that the couple chose to build their modest house, perfectly situated to take in the garden’s entirety and the panoramic view beyond.

Following Nicholas’ death in 1987 and Peggy’s in 1994, the townspeople of Victoria were horrified to learn of a developer’s plan to bulldoze the garden. With the help of volunteers, in 1999 the Land Conservancy of BC came to the rescue, ensuring that the Abkhazis’ horticultural treasure that Peggy and Nicholas referred to as “our child” would endure.

With the growth of the city, the garden is no longer on Victoria’s outskirts but is located in a leafy, residential neighborhood. Abkhazi Garden (1964 Fairfield Rd., Victoria, BC, V8S 1H4; phone 250/598-8096, email [email protected] or visit www.conservancy.bc.ca  (click on “Properties & Programs,” then “Places to Visit”)  is open 11 a.m.-5 p.m. daily from March to the end of September. An entrance fee is charged. The Abkhazis’ residence houses a tearoom, 11 a.m.-4 p.m., and a gift shop.
For Victoria Information:  Tourism Victoria, 737 Yates St., Victoria BC V8W 131.  Web: www.tourismvictoria.com .