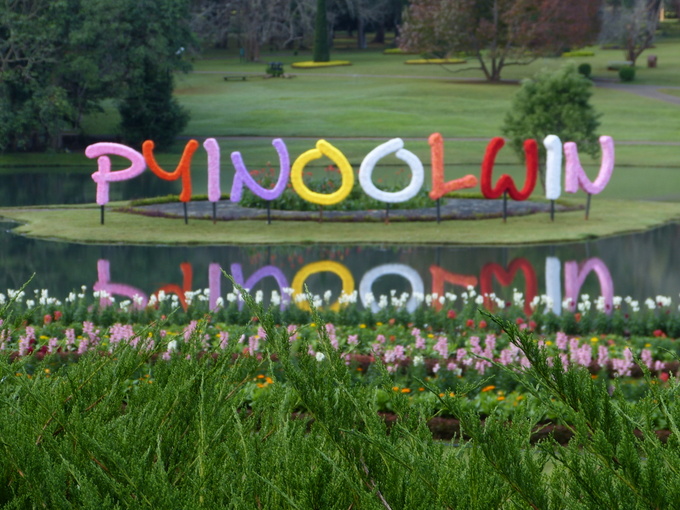 MYANAMAR Pyinn Oo Lwin – Myanmar’s colonial, British-era town, Maymyo –  named “May Town” after Colonel May then in charge of the Fifth Light Infantry of the Bengal Army – offered a cool “hillside station” retreat from lowland Mandalay’s oppressive summer heat. Horses, ridden or pulling carriages, provided transportation to an environment more than a little reminiscent of home. When the Mandalay to Maymyo railway was completed a few years after the station’s 1896 founding, Maymyo became the Burmese government’s summer capital.

An inviting getaway from Mandalay …

Today Maymyo, known by the Burmese as Pyin Oo Lwin, remains an inviting getaway for locals and visitors alike, not only from summer’s humidity, heat and smog but as a year-around escape from Mandalay’s human and traffic bustle. 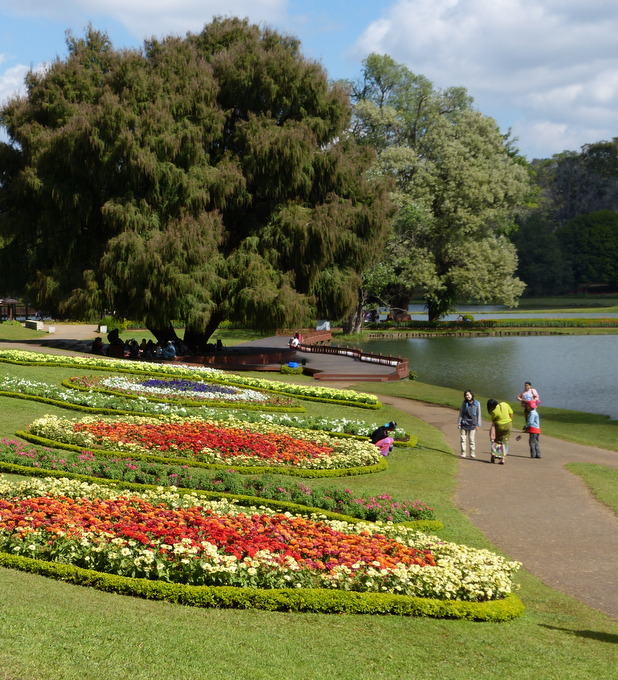 My visit was in December, a month of pleasant lowland weather, so my visit had nothing to do with seasonal swelter.  Maymyo’s botanical garden, the Kandawgyi National Gardens, would be readying itself as the showcase of the town’s flower festival. 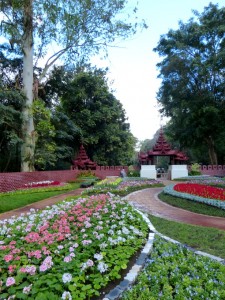 The winding road to Maymyo ….

A taxi delivered me to the 3,500-foot-high retreat over a 42-kilometer, winding road. As we climbed, splendid views of the Mandalay plains appeared below.

And then we came upon the hill station itself, where the legacy of British Burma most visibly lives in Tudor and Victorian-style hotels and grand homes.

A clock tower does its best to imitate Big Ben. Miniature horse-drawn closed carriages clip-clop people about, stopping off at the golf course should one wish to play a round. Church spires peaking through the trees came as a bit of a jolt in this land of pagodas. Added to all that,  a magnificent botanical garden, its 1915 implementation aided by London’s Kew Botanical Garden.

In 1917, the government officially recognized the garden; in 1924, the site was declared a Government Botanical Reserve. Twelve years ago its 382-plus acres, expanded from an original 30, were renamed “Kandawgyi National Gardens.”

Garden workers were readying festival flower displays for the festival as I entered the garden gates (entry fee $5 USD for foreigners). From there, signposts bristled with directions to various garden areas.  Paths wandered sweeping lawns edged with bright flower beds. Reflections in a series of lakes and ponds doubled the effect of edging flora and the puffy-clouded, blue-skied day while exotic waterfowl, including pairs of black swans, serenely sailed by.

In 95 separate areas, 589 species of local and foreign trees are planted ( not counting 42 acres of the site’s surrounding acreage designated as a protected forest area). Included is an orchard devoted to fruit-bearing varieties.

Crotons claim a special section of their own with 75 species identified; the nearby bamboo forest also lists a collection of 75. Medicinal plants for traditional use are well represented in their own area. A rose garden gives a small bow to Britain with a representative planting of 25 varieties.

An aviary duplicates life in the wild for a variety of exotic birds with Myanmar’s national symbol, the peacock, well represented with six species.

Two years ago, a Butterfly Museum was built to showcase over 40,000 butterflies collected in Myanmar and other areas of South East Asia. The butterflies are displayed in groups as framed “pictures” so arranged that each appears as a work of creative art. Beetles are also displayed, ranging from teeny-tiny, shiny creatures to those measuring in multiple inches, with some so intricately created they could be worn as jewelry. 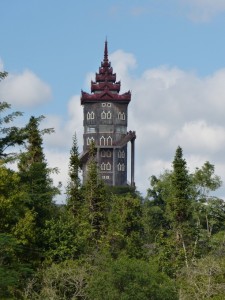 Before leaving the garden, I made my way to Nan Myint Tower near the garden’s northern gate. A series of stairs winding around its 215-foot- high exterior offered a different panoramic view in their approach of the tenth-floor viewing deck. Along the way: the Kandawgyi Botanical Gardens in its entirety; the leafy, transported-from-Britain town of Pyin Oo Lwin; the Mandalay plains stretching in the far distance to the sprawling city of Mandalay – an hour and a half away and yet a world apart from Britsh, colonial-era Maymyo. 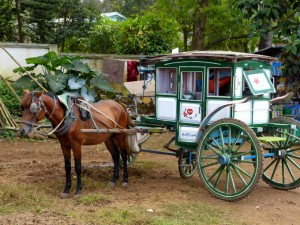