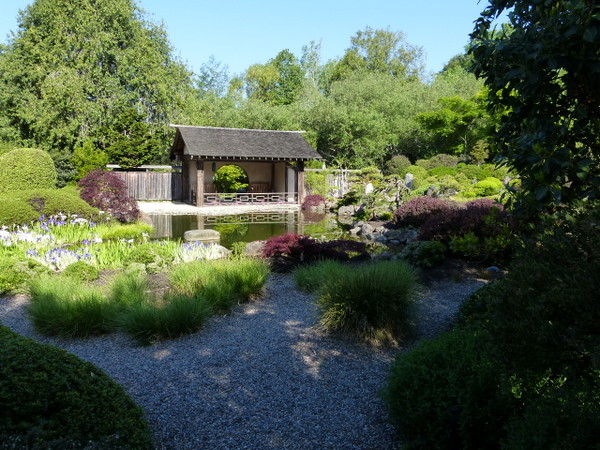 Osmosis’garden of tranquility adds “sanctuary” to the spa experience.

CALIFORNIA Sonoma County – In the tiny hamlet of Freestone,  a quiet dance goes on in the Zen-inspired serenity of the gardens surrounding Osmosis Spa. The dance is between Michael Alliger, master pruner in the Japanese tradition, and the shrub or tree about to receive his attention.

“I have a move in mind that has to do with the garden’s scale and points of interest,” Alliger says.“The plant, however, instinctively knows what its own next move is supposed to be.”

The dance begins with a snap of his clippers. Will the plant respond to his lead? “Sometimes the dance between the garden’s concept and the natural plant doesn’t work,” he says. With that, the plant is removed from the garden. 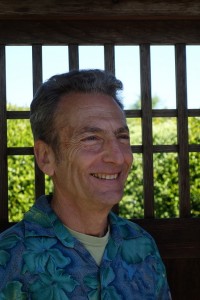 The garden, which has seen Alliger’s practiced hand since its beginning, is the culmination of a long-held dream of Osmosis’ owner and founder Michael Stusser. “Thirty-one years ago,” Stusser says, “I visited a Japanese garden in Kyoto and experienced such a profound sense of inner peace that I returned later that year to begin an apprenticeship in landscape gardening.” While there, he discovered cedar enzyme baths, a rejuvenating heat treatment well-known in Japan. In 1985, he returned to California to establish a spa featuring enzyme baths that he named Osmosis.

“For 17 years, I was absorbed in the creation and operation of  Osmosis,” Stusser says, “but all the while knowing that someday I would create a garden with the spirit and feeling of a classic Japanese garden.”

In 2000 the planting of Osmosis’ garden was underway – a meditation garden using blueprints and sketches provided by Robert Ketchel, a renowned English designer and builder of Japanese gardens. The planning of the garden renewed an old acquaintance between Ketchel and Stusser, a friendship begun when they were both apprenticing in Kyoto.

Ketchel built his design around a Zen Bhuddist parable, the Ox and the Ox Herder, a metaphor for enlightenment. The parable reveals steps toward learning, with the ox symbolizing the mind and the herder symbolizing the seeker.  Large boulders placed in eight stages around the garden perimeter represent the ox and the herder.

“Robert provided precise drawings for each boulder, and I spent a-year-and-a-half searching local stone yards to find them,” Stusser says, with a laugh. 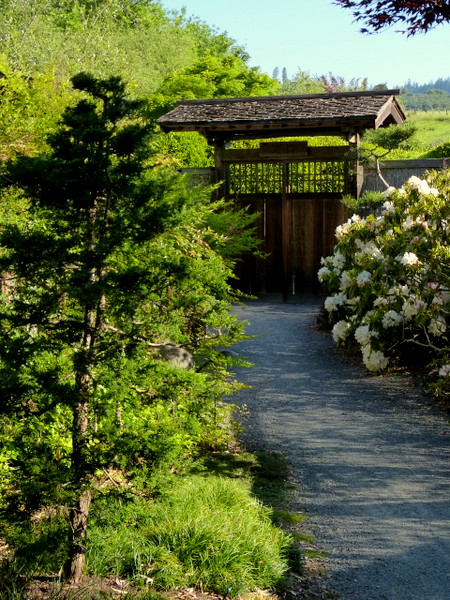 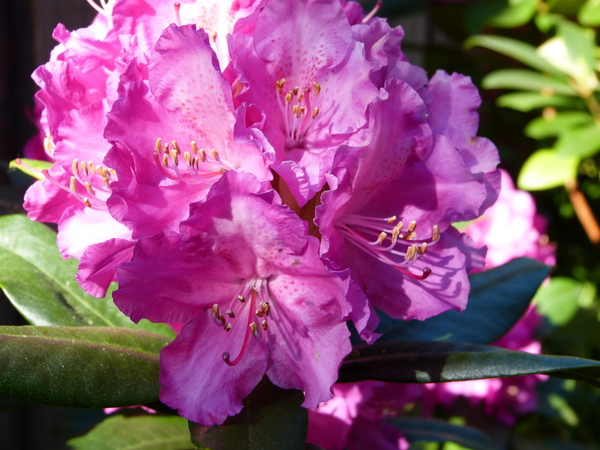 Once through the gate, the garden is not immediately revealed. An undulating hedge, a combination of Pittosporum tenifolium, Prunus caroliniana, and Myrtus californica, obstructs its view. On the left, a rusty 1932 Chevy dump truck, immersed in greenery, was allowed to remain as a reminder of the cars, trucks, railroad cars and 400 cubic yards of assorted debris removed from the property’s former life as a junkyard. 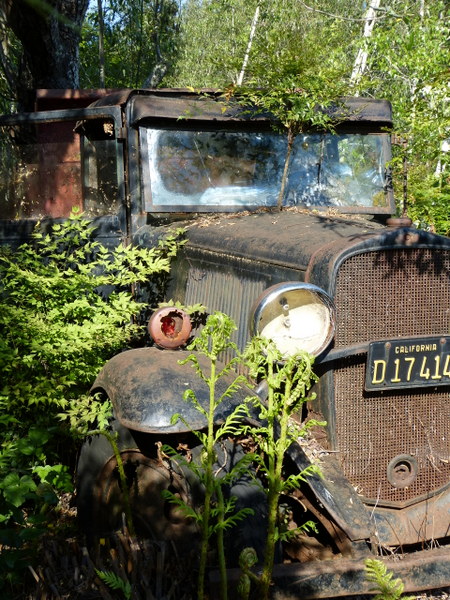 Rusty 1932 Chevy truck remains as reminder of garden area’s past, a dump.

Stepping stones edged with elfin thyme lead to the Meditation Garden’s viewing pavilion built from recycled wood from an old bridge that once crossed Salmon Creek. A large lily pond centers the garden, its shape that of the Chinese character for heart and mind. 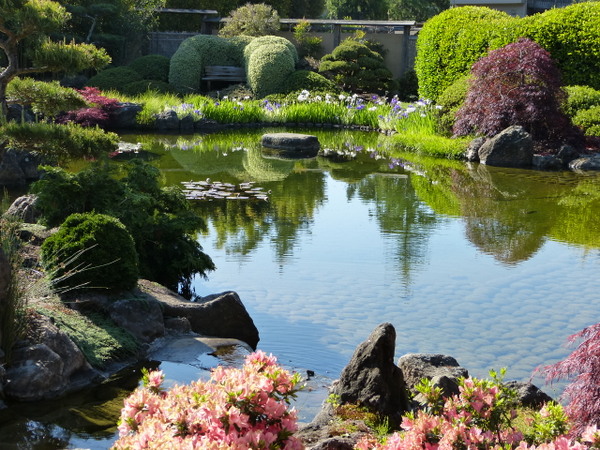 The central pond is shaped like the Chinese character for heart and mind.

Across the pond, a rocky out cropping is punctuated by a juniper that has managed to emerge from its stylized dance with Alliger to retain its own idiosyncratic character. 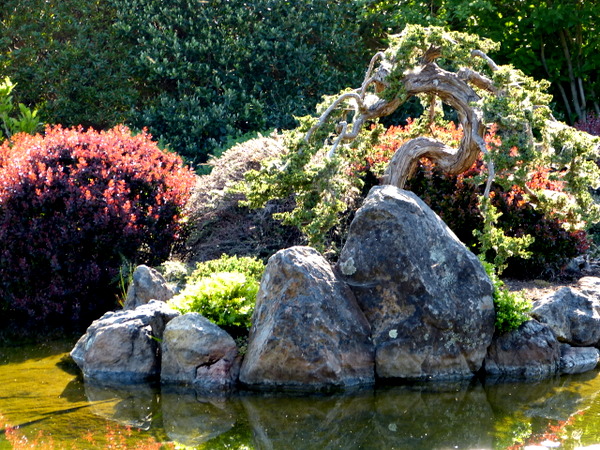 A juniper emerged from pruning with a mind of its own.

A raked gravel area to the right, symbolizes water. Off to one side is where the Ox and the Herders’ path to enlightenment begins. 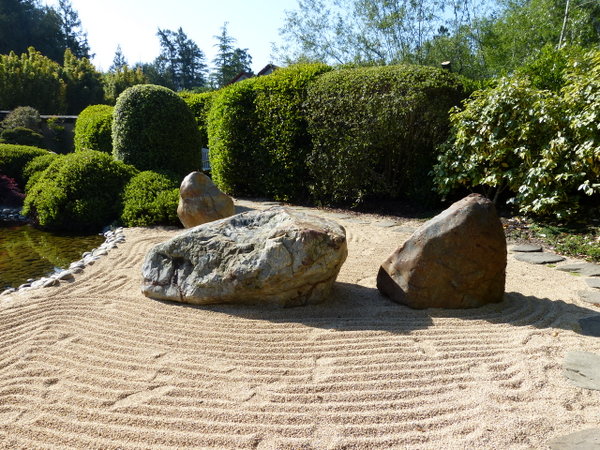 Large boulders, representing  the ox and the herder, are placed in eight stages around the garden.

Stusser is quick to explain that guests to the garden need not be concerned that they must deeply understand the Zen meaning of the garden. “If one comes away with a quieting of the mind the garden has served its purpose,” he says.

To aid in that, installations of comfort and familiarity have been introduced into the classic design. While floor pillows in the pavilion invite traditional positions of meditation, a bench overlooking the pond is surrounded by a cropped, rounded hedge of variegated pittosporium, creating a contemplative spot akin to settling into the embrace of a cozy, overstuffed armchair. 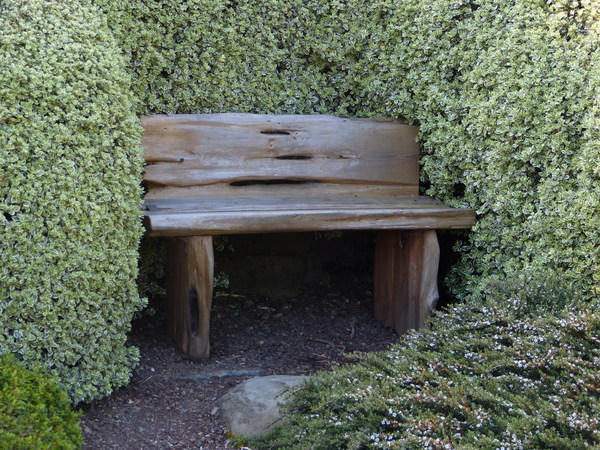 Guests can observe the garden from a shrub embraced bench.

A small lawn area is included that invites stretching out to watch the clouds sail by. Next to it is an area carpeted in prostrate chamomile where one might like to to experience, as Stusser describes it, “a direct connection with aromatherapy.”

California native plants, pruned and trained, keep easy company with their classic Japanese neighbors – Carpetneria californica; coffee berry; a hedge of Ribes; ceanothus; California myrtle; Manzanita, in one instance sheared to drift like a blanket over a boulder. 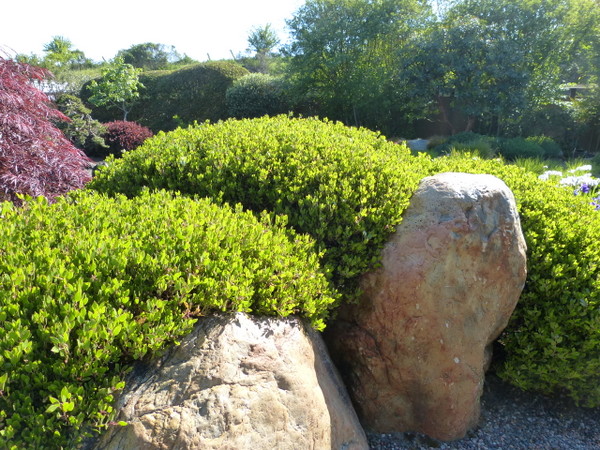 Grasses, reminiscent of those growing in the nearby coastal dunes, find their place in the more wild and natural part of the garden.

The parable’s final stage, Returning to the Source, is expressed in a series of waterfalls flowing down from a rocky mound. “Robert spent an inordinant amount of time ‘tuning’ the waterfall,” Stusser says, “positioning the stones  and adjusting the stream’s levels to achieve exactly the sound he had in mind.” The stream passes under a stone bridge to be captured in the stillness of a pond. 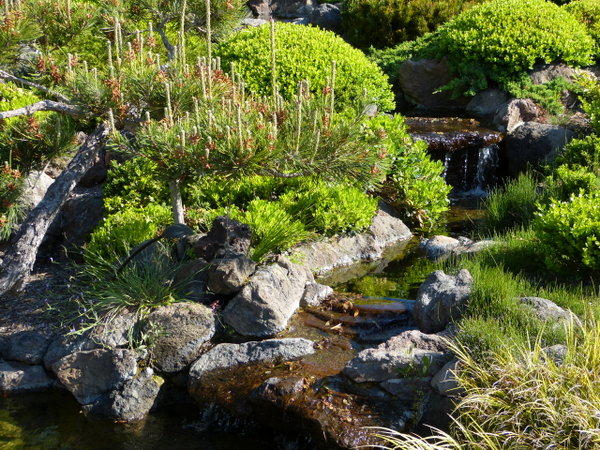 The final stage of the parable is expressed in a waterfall.

“At a traditional spa,” Stusser comments,“guests experience their treatments and the next thing they do is jump in their cars and re-enter the busy world. Here, the garden offers an additional element to the spa experience – sanctuary.” 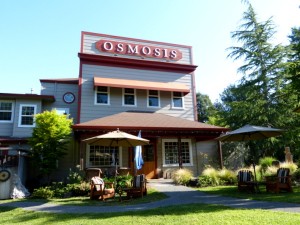