ENGLAND Bath – Bath was awash in Jane Austen character lookalikes. Hundreds of Mr. Darcys and Mrs. Bennets filled the sidewalks of this patrician small city in homage to the five years Austen lived and wrote there. It was Bath’s annual  Jane Austen Festival and I, alas, not a Jane Austen fan, had unwittingly blundered into its midst for a three-day stay. 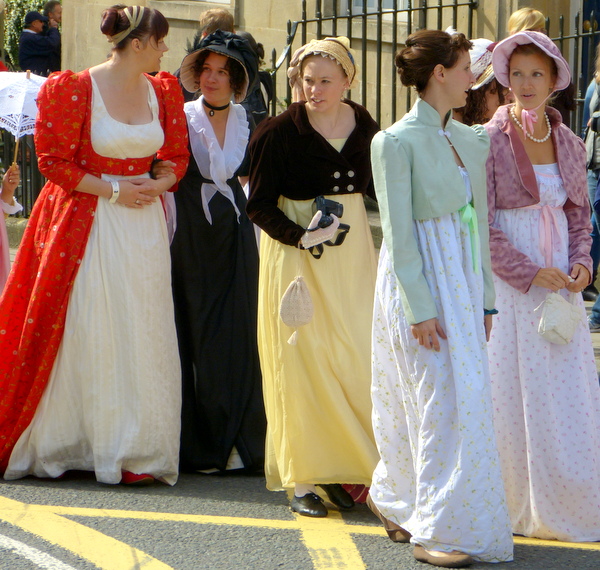 The annual Jane Austen Festival brings hundreds of  Austen-era lookalikes to the patrician city of Bath.

“Oh, who could be bored with Bath?” cried Catherine Morland, the ever-optimistic heroine of Austen’s Northanger Abbey. Well, Jane Austen for one, who with her customary caustic wit privately claimed to have happily escaped the place ( bad climate, silly social life, Bath’s famous Sally Lunn buns gave her indigestion). No matter, it appeared that to the city’s bonneted and waist-coated visitors this week, Bath was Austen Mecca. 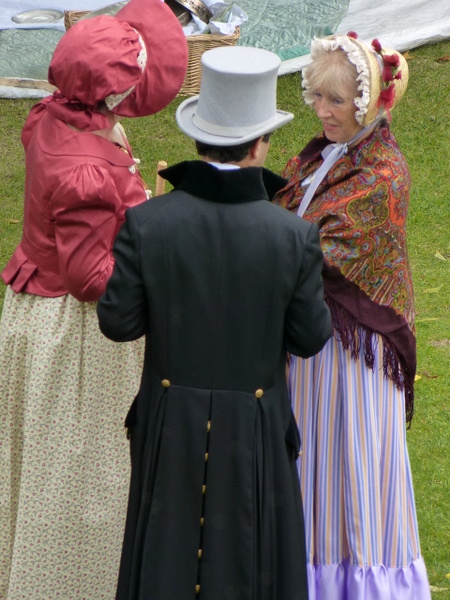 Rather than take on the impossibility of ignoring the Festival, I decided to go along with it and signed up for a Jane Austen walk that, to my delight, led to the discovery of two gardens, gardens with  Jane Austen tie ins, though not eye-rollingly so.
A leafy path, known as the Gravel Walk, albeit now paved, follows the backyard curve of a section of the Circus, the elegant circle of Georgian-era, Palladian townhouses overlooking the city. Captain Wentworth and Anne Elliot of Austen’s novel Persuasion, finally reconciled and deeply engrossed in each other’s presence, walked this path.

Today, similarly engrossed, it would be easy to miss a small green door in the brick wall marking the Circus’ edge. Pushed open, it revealed a remarkable survivor of a Georgian-era, walled garden, appropriately called the Georgian Garden. Excavations by the Bath Archaeological Trust in 1985 revealed that the original garden had no lawn but was instead surfaced with the mix of  gravel and clay, deemed much kinder to the fashionable fabric shoes of the day than wet grass. A period roller placed in the garden reminds that, while practical, the surface was not maintenance free. 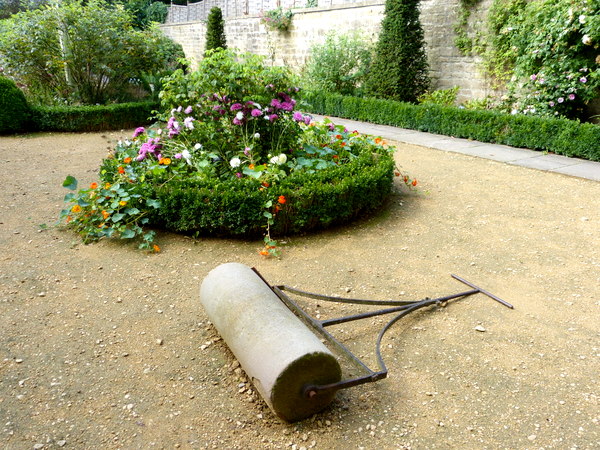 Regular rolling created a garden surface kind to the fabric shoes of the day. 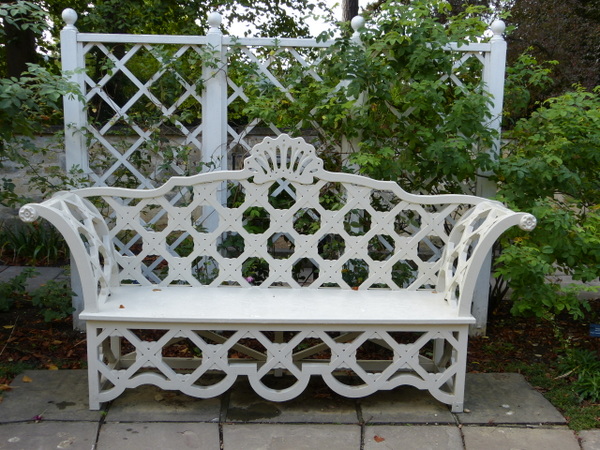 An ornate bench marks the bottom of the garden.

Shrubs and flowers available in the 18th century filled the garden’s side beds and circular areas, all edged neatly in boxwood. At the bottom of the garden, a bench  invited lingering- Jane Austen novel in hand? – in the quiet seclusion of the garden . Behind the bench, a flight of steps, added around 1770, gives access to the then newly created Gravel Walk – and, on this day, a whole new parade of Austen character lookalikes. 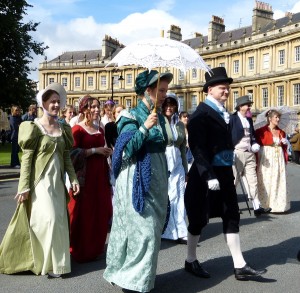 Sydney Garden, is Bath’s oldest park. Designed in 1795 as a commercial pleasure garden, its 12-acre expanse of lawns, trees, shrubs and flower-filled spaces quickly became the place to stroll and be seen while enjoying a sham castle, maze, grotto, thatched pavilions, swings, a “mill-scene” represented on canvas, and a “cascade” consisting of painted rollers with mechanical figures passing over a bridge. All had disappeared by 1840.

In 1891 the original 99-year lease of Sydney Gardens expired and the pleasure grounds were sold.  The site was bought by Bath City Council in 1908 and reopened to the public as a city park in 1913. The gardens were reached via the entrance gate to the elegant Sydney Tavern, now the Holburne Museum of Art, home to fine and decorative art. 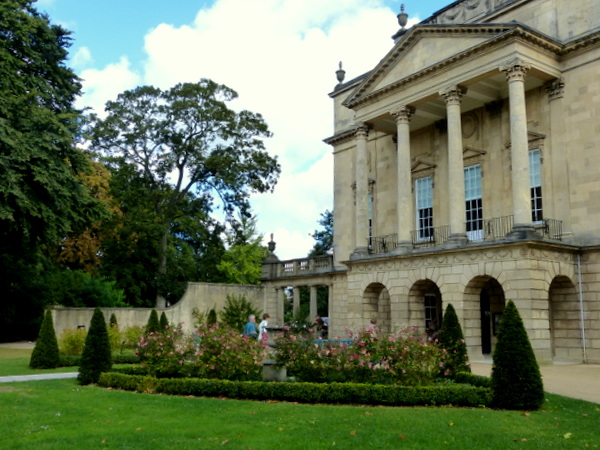 The Holburne Museum of Art once housed the garden’s elegant Sydney Tavern.

In 1801, the Austen family took lodgings at Number 4, Sydney Place, directly across from Sydney Tavern. “There is to be a grand gala on Tuesday evening in Sydney Gardens,” Jane wrote to her sister Cassandra, “A concert with fireworks. The concert will have more than its usual charm for me, as the gardens are large enough for me to get pretty well beyond the reach of its sound.” 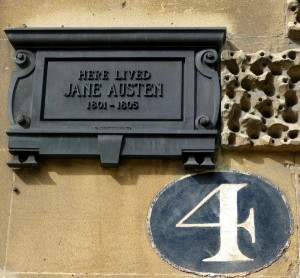 A ciy-center oasis of greenery …

Today, in contrast to the quiet tucked-away confines of the walled Georgian Garden, the expansive acreage of greenery and flower beds, at the end of Great Pulteney Street is perpetually  busy with joggers on  morning runs, mums pushing prams, dogs chasing balls, elderly souls taking in a drift of sun from a path side bench. 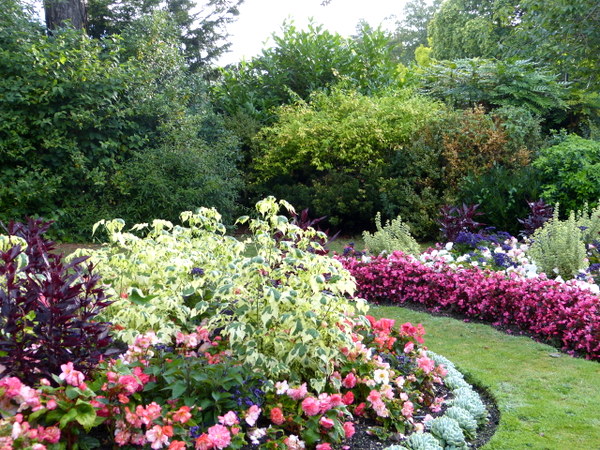 A canal divides the garden in half; part of the Kenet and Avon canal constructed betweeen 1796 and 1810 connecting Bristol with London. It was no sooner finished than  it was obsolete; steam engines, a faster and more efficient mode of transportation across the landscape. Sunk low between stone embankments, the canal does not obstruct sweeping views of the park.

Following a path, I was surprised to come upon what is today a charming, unexpected, picturesque feature of the garden. While sturdy stone bridges were constructed to carry carriages around the perimeter of the garden, elegant, iron bridges “in the manner of the Chinese”, were built for cross-canal foot traffic. Today they offer a stopping place to watch swans drift by and to wave at passengers aboard the occasional excursion boat making its way down the winding, tree-shaded canal. 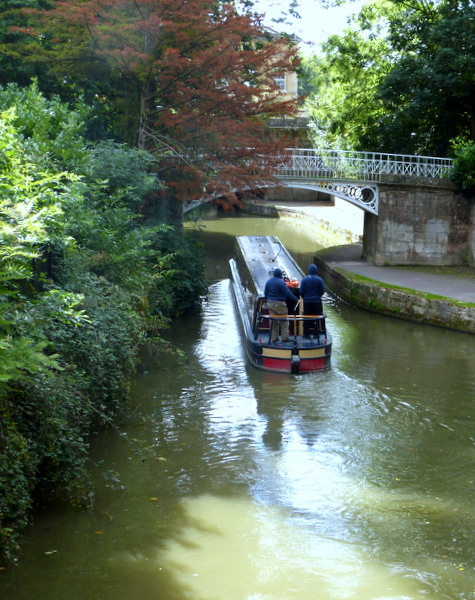 The Kennet and Avon Canal running through the gardens is today a picturesque,  unexpected feature of the garden.

Before leaving the garden, note the Holburne Museum’s tea room, with garden seating on fine days,which provides an opportunity to sample Bath’s famous Sally Lunn buns … hopefully without a touch of indigestion.

A visit to the Roman Baths is a Bath “must do.” Opting for an audio guide, as I did on my visit, brings the baths and the entire Roman era to life with description, sounds and stories. Plan on staying at least three hours becoming immersed in an outstanding tourist attraction. Open daily, except December 25, 26; www.Romanbaths.co.uk.  Visitor information at www.visitbath.co.uk. 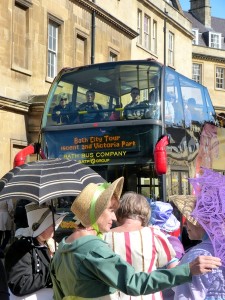