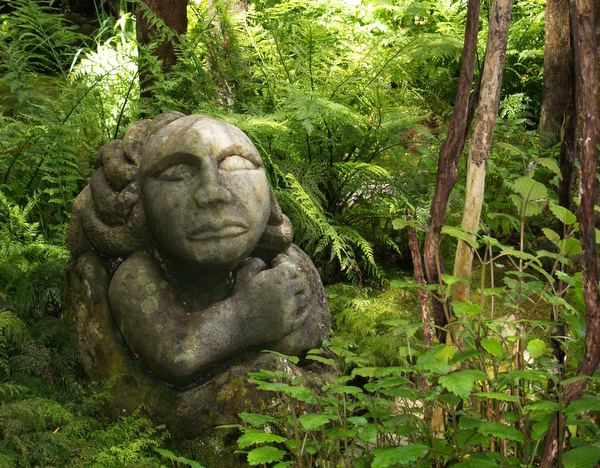 NEW ZEALAND New Plymouth – Walking the undulating paths of Te Kainga Marire, through an idyllic landscape of New Zealand native plants, it came as a bit of a jolt to peer through the foliage and see a next-door neighbor’s quite ordinary looking back yard.  In my wandering, I’d quite forgotten that I’d entered this “wild New Zealand” from its entrance on a neighborhood cul-de-sac, with the city of New Plymouth’s busy downtown but minutes away.

A plan to bring wild New Zealand to town …….. 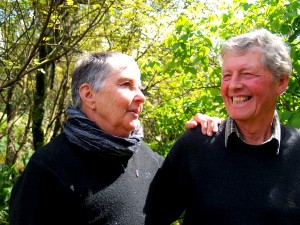 Te Kainga Marire’s owners, David Clarkson, an immigrant from Yorkshire, England, and Valda Poletti, granddaughter of immigrants from Northern Italy, met on a chance alpine encounter on  North Island’s  Mt. Taranaki. A shared loved affair for the mountain led to marriage and children and the inevitable need to settle down.

They chose a half-acre property in the nearby city of New Plymouth as a base camp for the outdoor adventures they intended to continue pursuing.

“Our big plan was to bring wild New Zealand to town,” Valda told me. “That was forty years ago.”

Their chosen half acre was a clay wasteland, barely supporting gorse, blackberry and weeds.  What it had going for it was its location – an adjacent historic Maori village (now a bush preserve), a swamp forest remnant, and a mountain stream. Consultation with a Maori resident  provided a perfect name for their big plan, Te Kainga Marire, which translates to  Peaceful Encampment. 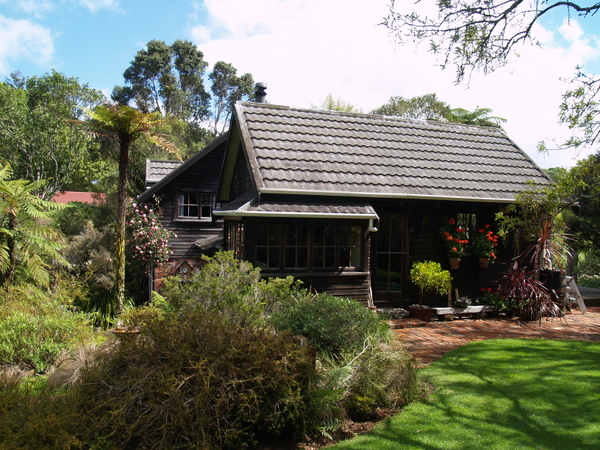 Plantings emulate groupings in the wild …

The site’s topography influenced where the family’s house would be built and where other elements they wanted to include  might be located.  “As luck would have it,” Valda told me, “the center of the property was already pretty swampy, making it absolutely perfect for a pond and wetland forest.” 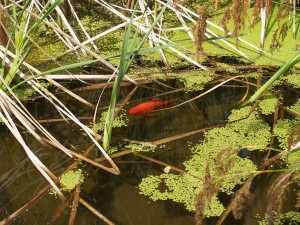 Plantings were chosen to emulate groupings in the wild. As the years passed, the landscape plan evolved into what Valda described as the “real New Zealand.”

To Valda, an orchard and vegetable garden was an essential ingredient. “I inherited a Poletti tradition,” she explained, “a strong need to grow food for my family.”  A high, corner area provided plentiful sun and Valda went about the backbreaking labor of removing  a top layer of clay by hand, wheel barrowing it across the street for a needy neighbor to use to build up his front lawn, and then wheel barrowing in new top soil to create a suitable planting base.

Another bow to Valda’s Italian heritage is the climbing rose “Souvenir de Mme. Leonne Viennot” that now threatens to cover the entire east wall of the house.  The rambunctious rose grew in her grandmother’s garden on a dairy farm near New Plymouth.

A north-facing slope, was deemed suitable for an alpine coastal garden. Andecite rock  for retaining was sourced from David’s brother-in-law’s farm at the foot of Mt. Taranaki, giving an authentic feel to the landscaping, “Our faithful trailer carried many tons over the years as the garden progressed,” Valda said, “rocks manhandled out of the earth using primitive methods – planks and brute strength.  I’d say to David, ‘If I can wiggle it, we can move it.’ And so we did.”

A design for a proposed fern garden in a space adjacent to the swamp area remained elusive for many years until in a  light-bulb moment it came to Valda, “We’ll do it in the shape of an unfurling frond!” she announced. 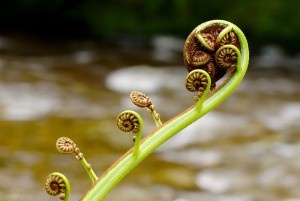 Steps were cut down a bank, a trench was dug to create a tunnel under a constructed, sunken, rustic, fern house connected to a pathway laid out in the shape of an unfurling fern (New Zealand’s national symbol).

Centerpiece for the garden is a stone carving of Hine-Ahu-One, or “Earth-formed Maiden,”  from the Maori legend of creation,  carved from stone by Reece Rongonui, a Marori artist. . 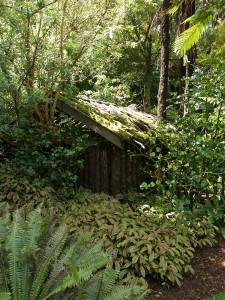 Lush with ferns of every description,  the garden’s unfurling path is marked by a parade of ponga (tree fern) trunks, symbolizing family and friends, deceased and present, ancestral and spiritual. In 2002 the fernery garden opened for public viewing.

An abundance of native birds fill Te Kainga Marire with songs and warbles the year around.   Add to that visits by grandchildren, provided by David and Valda’s three children, who bring to the garden the sounds of  laughter, little voices, splashing about, and the barking of dogs. “The Peaceful Encampment is not always peaceful,” Valda laughed.

Visitors are welcomed at Te Kainga Marire by advance arrangement.  Telephone 06 758 8693; e-mail [email protected]. The garden is located on the west side of New Zealand’s North Island at 15 Spencer Place, Merrilands, New Plymouth.  Best times to visit are spring through autumn. A tariff is charged;  children and seniors free.