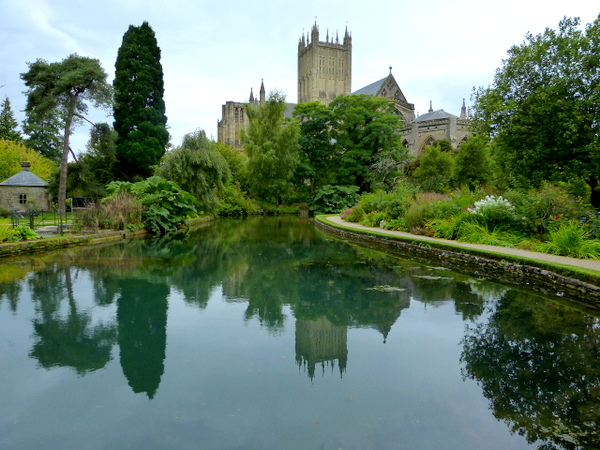 The Cathedral of St. Andrew’s image captured in a reflecting pool.

ENGLAND Wells – The Bishop of Bath and Wells, Robert Burnell, was staggeringly wealthy, owner of 82 estates in 19 countries. Given transportation options at his time of tenure (1275 to 1291), “staggering” must also have applied to his traveling schedule if he set out to drop by all of them in a year’s time, let alone unpack his bags and stay awhile.

Perhaps the Bishop’s Palace in Wells held a special place in Burnell’s heart. It was here he constructed, and paid for out of his own pocket, the Great Hall, a grandiose structure designed to entertain and impress the most important guests of the time.

Great Hall as a remnant of the past …

Years passed, during which the bishopric was gradually stripped of its wealth. Burnell’s gift to the Palace was left to crumble. Eventually the roof caved in. All that was left was a shell of what had been.

The Great Hall remained as it fell until the 1820s when the current bishop, Henry Law, looked at what remained standing and saw a romantic and nostalgic remnant from the medieval past, a glorious architectural frame for a garden. And so it remains today. 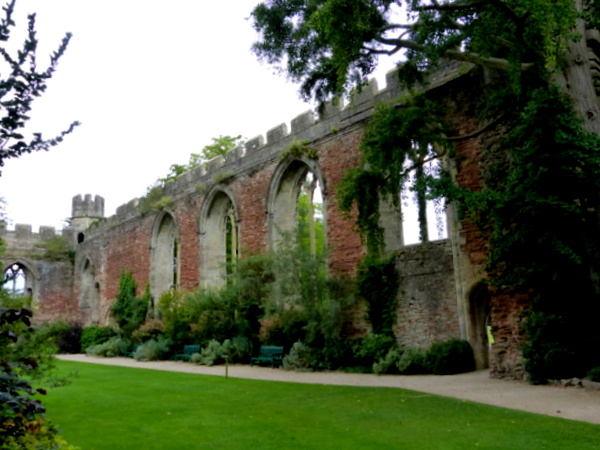 Walls of the ruined Great Hall frame the garden. 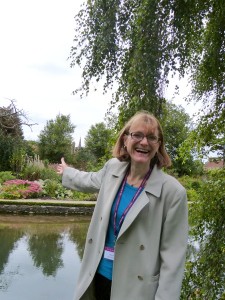 It was an overcast September day with rain clouds threatening when I entered the garden. Through an archway I spied a monk who appeared to be scurrying ahead to escape a possible deluge. As I came closer, the monk was revealed as a bronze statue, one of many pieces of art, realistic and boldly contemporary, that enhance the 14-acre garden.

Rosie Martin, Bishop Palace’s Chief Executive Officer, donned her raincoat to show me about. Martin told me of her first visit to the Palace shortly after moving to England’s smallest city in 2007. “Our son was just three weeks old. As I wheeled his carriage through the Great Hall archway into the garden I remember thinking, ‘I’ve arrived. This is where I want to be.’’’

A collection of specimen trees …

The archway through which Martin walked that day leads to the South Lawn. Here are located many of the garden’s magnificent collection of specimen trees, most planted by Bishop Law in the 1800s, including a Golden Catalpa, Ginkgo, an American Black Walnut.

Flowering shrubs and perennials brighten the greenery; piercings of medieval windows in the Great Hall’s remaining wall frame views of the Palace proper.

Rounding a corner of the wall, we entered a formal Edwardian garden, its precisely arranged boxwood-edged planting areas in sharp contrast to the open the sweeping expanse of the South Lawn. A flower-filled urn centers the garden, drawing the eye to the garden’s backdrop, the stained-glass windows of the Palace chapel. 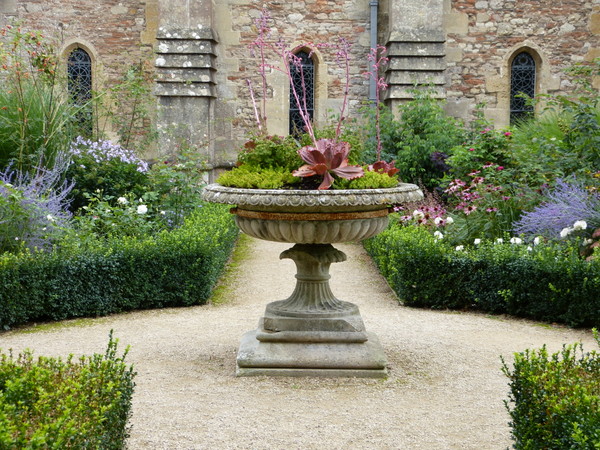 The stained glass windows of the palace chapel becomes the backdrop for the formal Edwardian garden.

We took the boardwalk bridge to cross the moat that surrounds the Palace grounds to enter the area that gave the city of Wells its name. Here, in the most ancient part of the Palace site, well pools fed by an underground river bubble up . Early on, to control the abundance of water, in addition to the moat an intricate system of channels and sluice gates were devised that continue to regulate the flow to this day.

Here, too, Bishop Law looked at what had long existed in a new way, as he had the ruins of the Great Hall. A large pond, positioned just so, could provide a mirror image of the adjacent Cathedral Church of St. Andrew. Even on this overcast day, the reflection of one of England’s most beautiful cathedrals was breathtakingly lovely in its embrace of greenery and flowering shrubs. 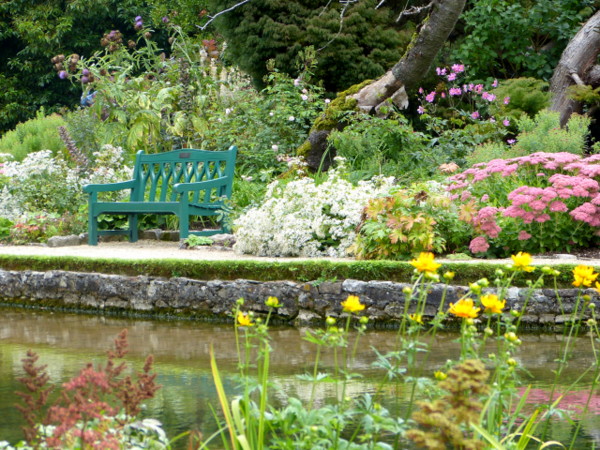 Rosie Martin had another place of reflection to show me, the garden’s newest addition appropriately called the Garden of Reflection. We followed a curving path to enter a rounded, open-to-the –sky, nine foot tall, stone enclosure sculpted to double as a bench. Here one can sit quietly and, yes, reflect. Again, as in the Edwardian garden, plants were chosen to echo the colors and shapes of the Palace chapel’s stained glass windows.

Space for a community garden … 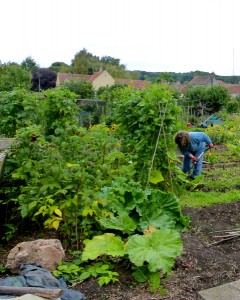 Also here, beyond the moat are located the Outer Gardens where, almost continuously since the 1300’s fruits and vegetables have been grown for the Palace kitchens. In 2012, a formerly derelict space was set aside as a community garden, giving locals the opportunity to grow their own fresh produce. This, too, was not without precedent. During his tenure as bishop, Henry Law, championing a national movement to develop allotments, encouraged local working people to grow potatoes on the estate.

But now, overcast had turned to drizzle, drizzle to serious rain. Rosie Martin and I opened our umbrellas for a fast return sprint through 800 years of garden history. Over the moat, across the South Lawn, past the bronze monk – noting his need of an umbrella – through the archway in the Great Hall’s wall and ready for a cup of tea at the Bishops’ Table, the Palace’s cozy café. 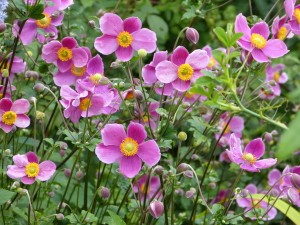