Ora Garden of Wellbeing explores relationship between nature and Maori

Ora Garden of Wellbeing explores relationship between nature and Maori

NEW ZEALAND Taupo – Blame New Zealand’s isolation, begun about 100 million years ago when the island nation drifted off from a super continent known as Gondwanaland.  Surrounded by thousands of miles of sea, New Zealand evolved its own set of flora and fauna – a Garden of Eden that leaves visitors speechless when it comes to attempting to describe its incredible geographical and botanical diversity. 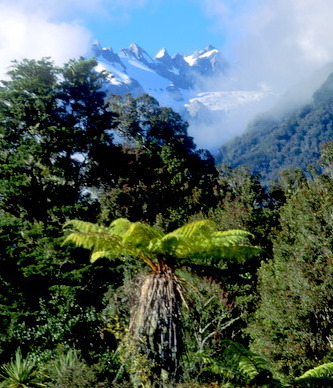 “Brazil meets Switzerland!,” was an attempt overheard on my November visit that struck me as hitting close to the mark.

In 2004, a design team of six talented New Zealanders set themselves the task of putting  in a nutshell this botanical bounty as it related  to the country’s indigenous Polynesian people, the Maori. Intrinsic to Maori belief is that plants and people share a common ancestry and that it is up to the people to be guardians of nature, the treasures of the land.

The nutshell turned out to be an entry in the 2004 Chelsea Flower Show.  Held in London since 1862, the show is considered to be the world’s most prestigious.  New Zealand’s entry won a gold medal.

Most Chelsea exhibits are dismantled never to be seen again. Not so  New Zealand’s, which brought me to a small museum overlooking pristine lake Taupo in the center of New Zealand’s North Island where the Chelsea gold-medal winner has been recreated as a permanent exhibit.

“It’s a challenge,” Joanna Martin, known as Jody, maintenance and caretaker for the garden, “told me as she pulled off her gardening gloves as we met in the courtyard of Taupo Museum where the Chelsea garden is now  located.  “The garden was created to last for the days of the  exhibition. Here, it is an ongoing garden. Over time, plants grow, plants die, requiring trimming, removal, replacement to keep the garden’s appearance as fresh as it was at the Chelsea show.   My job is to keep it looking perfect.”

As an example, Jody pointed out a  cabbage tree, as cordyline australis is commonly known, that has towered to twice its originally planted size. “It’s grown out of proportion to its setting and has to be replaced with a younger one.”

Every plant in the Chelsea garden, and as recreated in Taupo, was chosen either for its medicinal, culinary or cultural properties. All were native to  New Zealand, with most coming from the central area of the North Island.

While most perennials flew direct, other plants found it a long journey to the UK’s shores. Tree ferns stopped off in Ireland for a stay with a master fern grower to adjust to six weeks at sea.  “It was nervously precision timed,” Jody said. “The ferns didn’t have fronds up to a week before the show.” 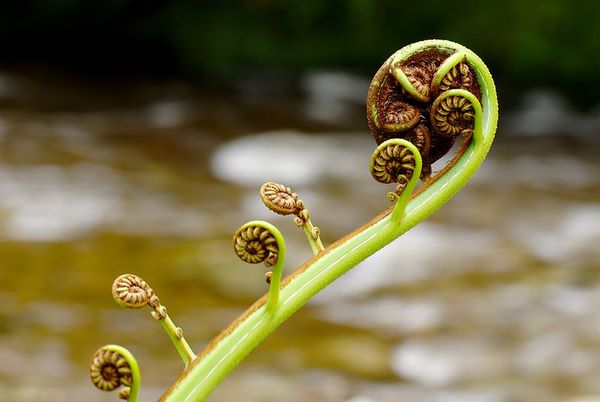 With uncurling fronds internationally recognized as the national symbol of New Zealand, no fronds would have been a sad affair for the garden’s designers. As it was, the garden emerged in hues of lush green, creating a tropical feel with no evidence of jet lag or culture shock.

New Zealand reproduction allows visitors to wander into its interior …

In Taupo, visitors are free to wander into the Hui Marae, “meeting place where people gather,” a secluded, sandstone paved circle. Steps away is the stream emerging from the  mouth of the huge Moko Waiwera, hot water lizard, its wood-carved, curving body extending from a top pool, across terraces to transport water into a bottom pool.

The terraces, made by Richard Taylor, winner of four Oscars for special effects in “Lord of the Rings, are a replica of New Zealand’s famed Pink and White Terraces. In the 19th century, intrepid  Victorian tourists flocked to New Zealand  to bathe in the thermal waters flowing over the terraces, which were known as  the “eighth natural wonder of the world” until destroyed in an 1886 volcanic eruption.

A small boy ran into the garden as Jody and  I talked, immediately making his way to Te Waha O Ruamoko, “the mouth of the god of the underworld,” to peer into a cave representing the opening to a passageway for spirits to enter the underworld domain of Ruamoko, god of volcanoes and earthquakes.

An illusion of an idyllic  New Zealand bush sanctuary … 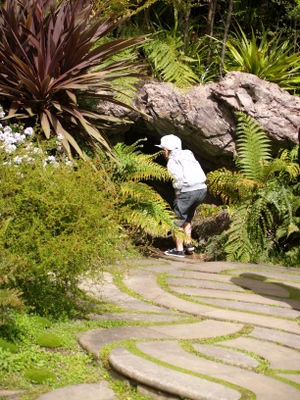 While structural features are the “bones” of the garden, plants are its stars. Nearly 1,000 plants are represented in the small space. While green is represented in the full range of its spectrum, vast foliage variation, from bold sword-like leaves to delicate stems decorated in green lace,  creates eye-catching interest. Color emerges sparingly with the red-blotched leaves of a pepper tree shrub, hebes fluffy flowers, the blue of Chatham Island forget-me-nots.

Piped in bird song and the haunting sound of a Maori flute enhances the illusion of an idyllic  sanctuary in the New Zealand bush.

When the exhibit won its Chelsea gold award, New Zealand gardeners sat up and took stock of what was growing naturally around them, realizing that a garden doesn’t have to be filled with European flowering varieties to be beautiful.

Jody Martin pulled her work gloves back on. “I love this garden,” she said. “In a tiny space, it showcases what we have here so beautifully.”

IF YOU GO: The Ora Garden of Wellbeing – “Ora” is Maori for “wellbeing,” hence the traditional Maori greeting “kia ora” literally meaning “be well” –  is located in the courtyard of the Taupo Museum. The museum itself is well worth visiting and includes a find replica of a Maori meeting house. A modest entry fee is charged.  The museum is located at  Story Polace, Taupo; phone + 64 376-0414; e-mail [email protected]; www.taupomuseum.co.nz. .  Open every day 10 am – 4:30 pm.