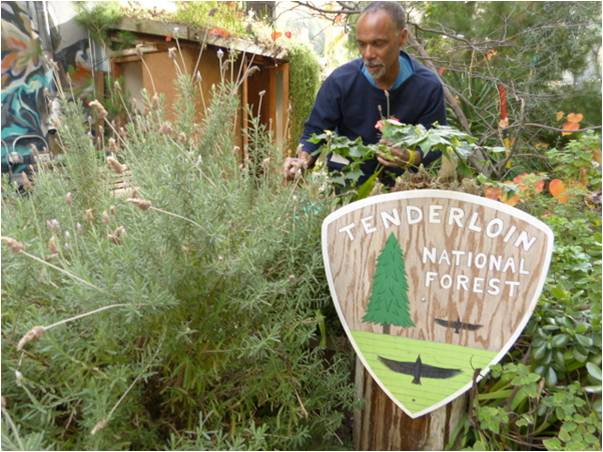 What was once a derelict alley is now an oasis of calm and greenery for the surrounding neighborhood.

Darryl Smith and Laurie Lazer, began to talk with others about transforming the alley. Seventeen students joined in. 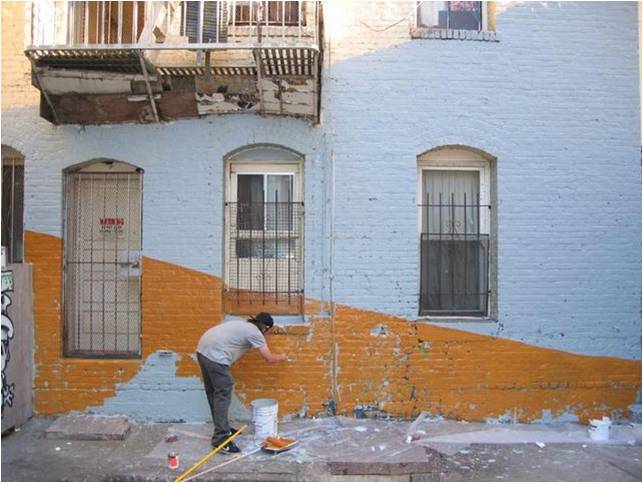 The artists began to paint murals on the encompassing buildings’ walls – faces of the  neighborhood,flights of imagination. 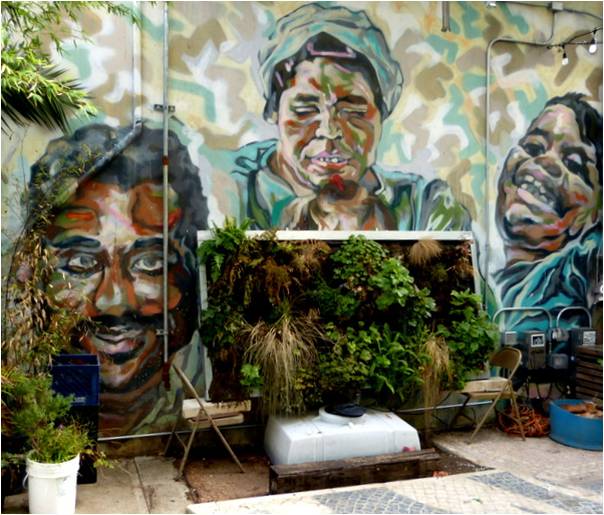 Neighborhood residents found themselves depicted on the alley’s walls.

At the far end of the 136 X 23 foot alley, Darryl planted a redwood tree.  So began the Tenderloin  National Forest – the tree, now four stories tall. 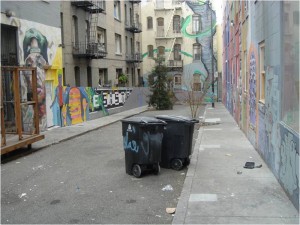 The beginning of the Tenderloin National Forest, the planting of a single redwood tree.

Nearly 25 years later, Darryl remains project lead artist with his now life partner, Laurie. “The successful unfolding on the project through the years, Darryl said,”is the on-going commitment of all of us to the alley as a safe, engaging, sustainable, open space.”

Mileposts along the way …

Residents, with some 300 living along the alley, began to put garbage in mobile cans and hauling  them to the street. The city and county of San Francisco leased the alley to the now  non-profit group for $1 a year. Performing art groups provided free concerts on the cleaned-up cement strip. 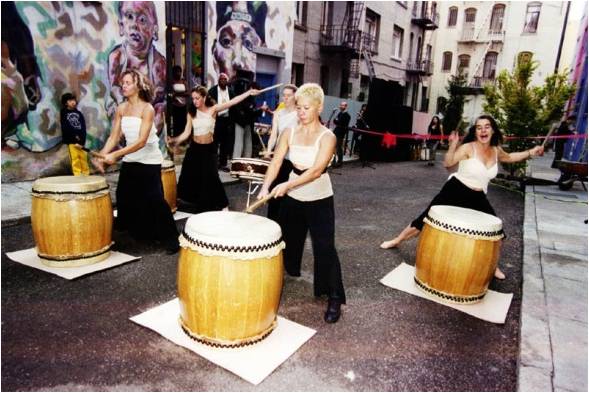 Free concerts enticed neighborhood residents to gather in the alley.

A gate, fabricated by Art Institute alumni, Kevin Leeper, responded to a neighborhood request to secure the alley at night. 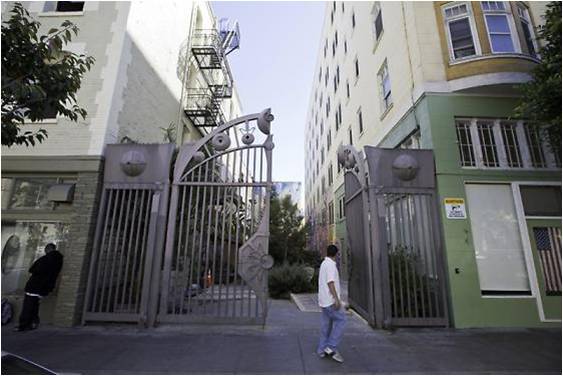 Responding to  neighborhood request, a gate now closes the alley at night.

Foundation seed money and art grants funded projects. “We’ve collaborated whenever it made sense,” Darryl said, giving as an example: “None of us were gardeners, so we asked the San Francisco League of Urban Gardeners for help, They donated the services of their landscape architects.”

A plan was drawn, submitted to the city, and approved.

The “forest”  begins to take shape …

With that, a second redwood tree joined the first, along with cherry, cypress, Japanese maples, pines, lemon, olive, a ginkgo with the neighborhood pitching in to help plant. 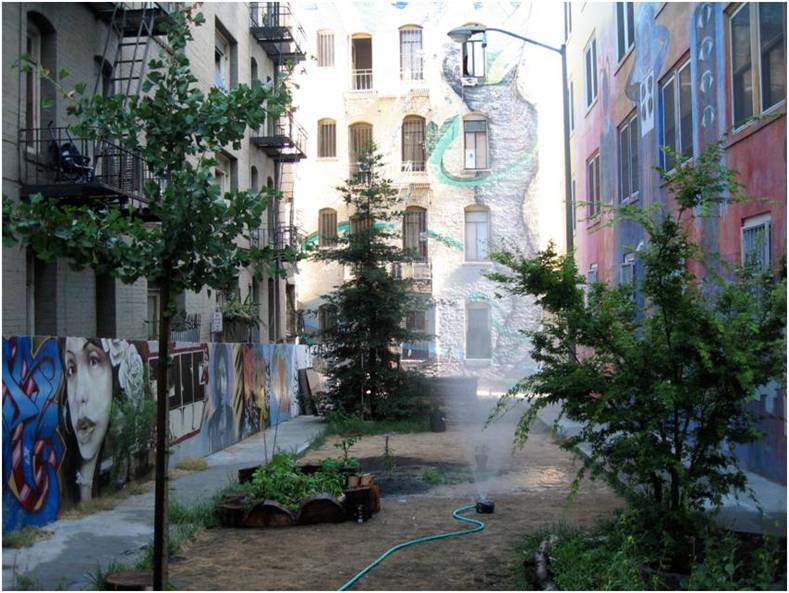 With the neighborhood pitching in to plant, greenery began to flourish in the alley.

Mosaic tiles, patterned after the coastal, Oholone people’s basketry was incorporated into the alley’s floor – its centerpiece a hummingbird, in homage to the birds now present in the alley. 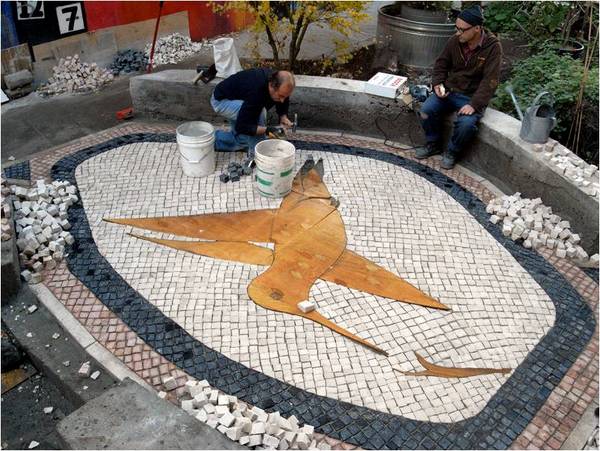 Hummingbirds are represented in mosaic tiles on the forest floor, as well as among other birds now flitting through the forest.

A clay oven was installed, monthly potlucks scheduled, anchored around pizzas and bread fresh from the oven – no one turned away for not bringing food.  Free Mending Library afternoons on the 15th of each month, with Michael Swaine repairing clothing on his pedal sewing machine. No charge. “Not missed a 15th of the month in 10 years,” Darryl marvels.

An art gallery enhances the reach of the alley …

An exhibition gallery nearby on Market Street was opened, Luggage Store Gallery, noting its former use, dedicated to the flow of images and ideas between the neighborhood’s diverse cultures.

The Luggage Store Art Gallery doesn’t sell luggage, as the building did in its former use.

Transformation of the gritty 509 Bar …

The 509 Bar became the Luggage Store Cultural Annex headquarters for an Artist in Residence program and  gathering place for art workshops for neighborhood kids. 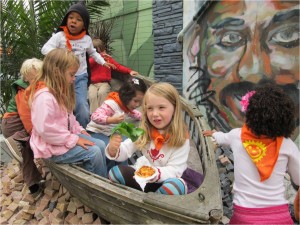 Neighborhood kids gather for play in the forest.

The alley began to resemble a forested canyon –lush with vegetables and herbs, cacti and succulents, ferns, a pond with darting gold fish – inspiring an Artist in Residence to come up with the name, Tenderloin National Forest, and create its iconic sign. 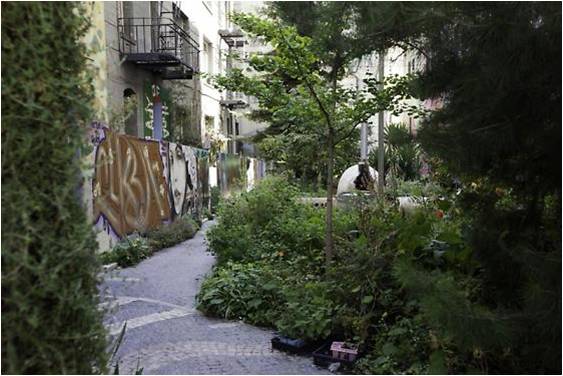 The alley transformed into a forested canyon.

A treasure oasis in the Tenderloin …

“The neighborhood treats the Forest with pride and respect” Darryl told me. “Yes, panhandling, dealing and use continue on the street, but there’s an unspoken rule – not in the alley.” 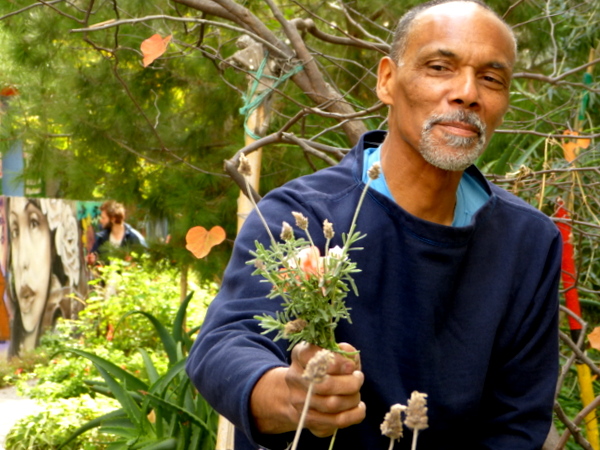