BRITISH COLUMBIA Victoria – Tulips, tulips and more tulips were the undisputed stars of The Butchart Gardens this mid-April day. Tulips edged beds, outlined paths, admired their reflections in ponds – thanks to 300,000 bulbs imported from Holland each year. 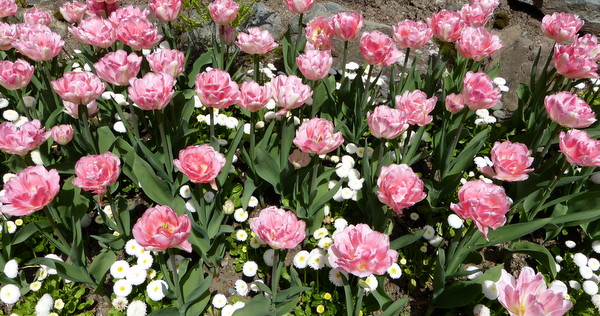 Along with tulips galore, a bevy of other bulbs, plants, trees and shrubs were in full spring fling throughout The Gardens’ 55 acres. Hyacinth, narcissus, pansy and primula, froths of forget-me-nots and carpets of blue muscari were well represented, with the Weekly Flower and Foliage Report, offered to visitors as a hand-out,  noting that more than two-dozen varieties of shrubs and trees were also at the peak of colorful display.

Had it been summer, roses, with some 6,600 planted, would have been the star. Fall? Dahlias become the showoffs, while granting the Japanese Garden center stage with its parade of red, russet and golden maples joined by dozens of varieties of chrysanthemums.

The Butchart Gardens’ goal is that, no matter how often or when one chooses to visit, there will always be something, fresh, new, and different to see.

As I wandered the paths of this gloriously flowering Eden, it was hard to believe that its historical roots had sprung from cement.Robert Pim Butchart, a turn-of-the- 20th- century pioneer in the burgeoning North American cement industry, was attracted to the West Coast of Canada by its rich limestone deposits, vital for cement production. He chose Tod Inlet on Vancouver Island as the location for a factory. There, he and his family established their home. 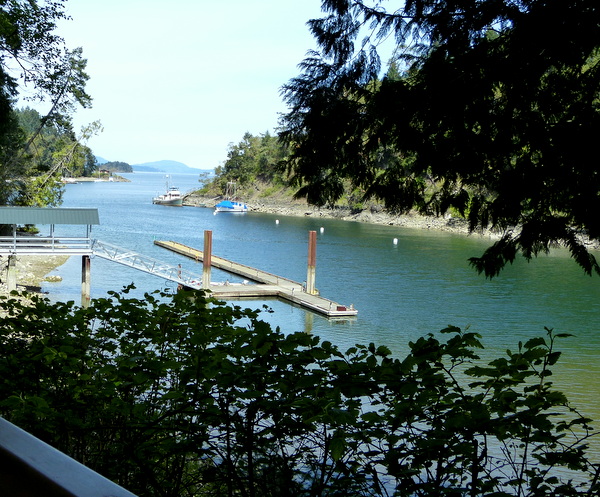 Tod Inlet marks the sea side edge of The Gardens.

Quite soon, the limestone in a quarry near the house became exhausted. What to do with the bleak pit? Robert’s wife, Jennie, had an idea.

From a nearby farm, she requisitioned tons of top soil and had it brought to Tod Inlet by horse and cart to line the floor of the abandoned quarry. Little by little, under her supervision, the quarry blossomed into what is today The Gardens’ centerpiece, the spectacular, and much- photographed, Sunken Garden. 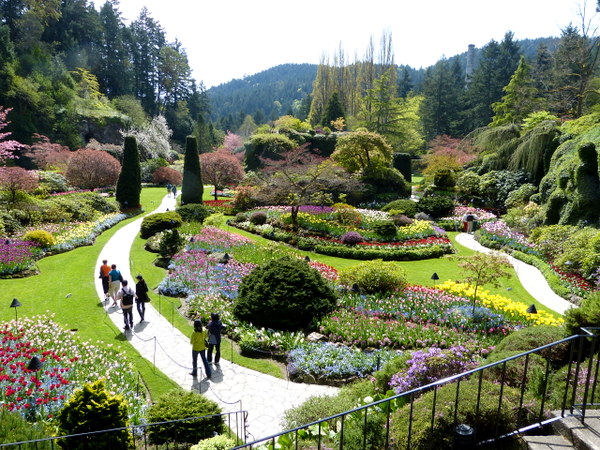 The Sunken Garden, site of the original quarry, is the undisputed centerpiece of The Gardens.

Other gardens followed, some reflecting the Butchart’s world travels. In 1908, the Japanese Garden on the sea side of their home was established. Later, when Jennie took notice that the tennis court was not seeing much action, the Italian Garden took over its space. In 1929, the Rose Garden replaced the Kitchen Garden.

By the 1920s more than 50,000 people arrived each year to stroll the property. With that, the Butchart’s christened their estate “Benvenuto” (“Welcome”), and planted an avenue of 566 flowering cherry trees – in glorious bloom at the time of my visit – along the road leading to the entrance gate.

Features of The Gardens …

Once inside the garden gates, I followed signposts bristling with directions, as do today’s some one million annual visitors. They pointed the way to the major Horticultural areas – Sunken Garden, Italian Garden, Rose Garden – as well as to restaurants, a museum, gift store, greenhouse, and visitors’ center. 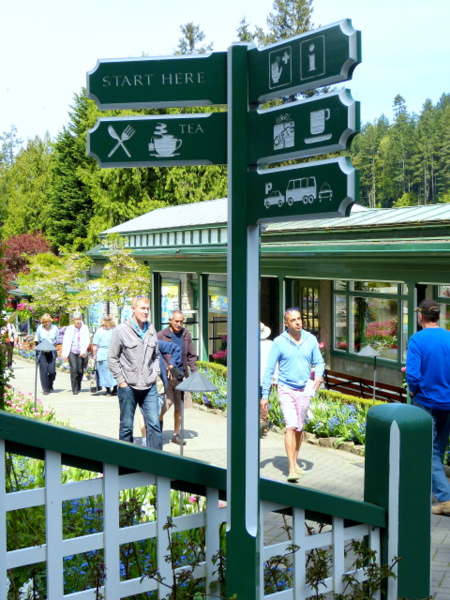 A dedication to benvenuto ….

The Gardens has been in family ownership for over a century, with each succeeding generation remaining true to Jennie and Robert’s spirit of benevento while dedicating itself to restoration and improvement.

In 1954, summer evening concerts, from jazz to classical, were introduced, and continue to entice thousands to spread out blankets and picnic on the Concert Lawn. Spectacular fireworks, introduced in 1978, enlist oohs and aahs from throngs drawn to the fireworks viewing area on summer Saturdays. 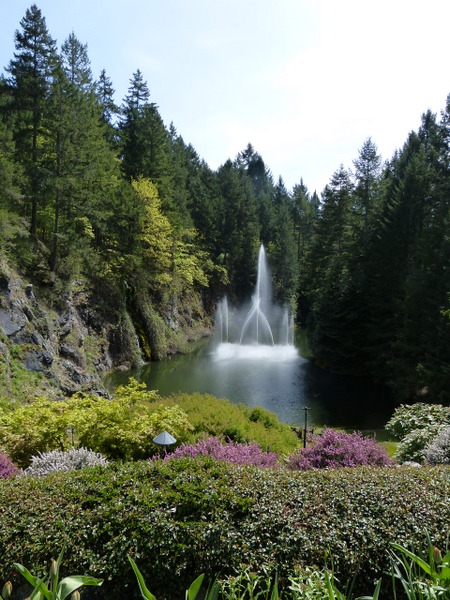 A pond with a water fountain marks the far end of the Sunken Garden.

The Gardens’ current owner and managing director is Jennie and Robert’s great-granddaughter, Robin- Lee Clarke. In 2009, under her direction a Children’s Pavilion and Carousel was constructed, the pavilion’s roof planted with native plant species. The traditional carousel housed within the pavilion consists of 30 hand-carved animals, a menagerie chosen by Clarke to mirror the world from which The Gardens draws its visitors.

Recognition as a Historic Site …

Under Robin-Lee Clarke’s leadership, in 2004, marking the 100 year anniversary of Jennie and Robert’s arrival at Tod Inlet, TheGardens was recognized as a National Historic Site of Canada. 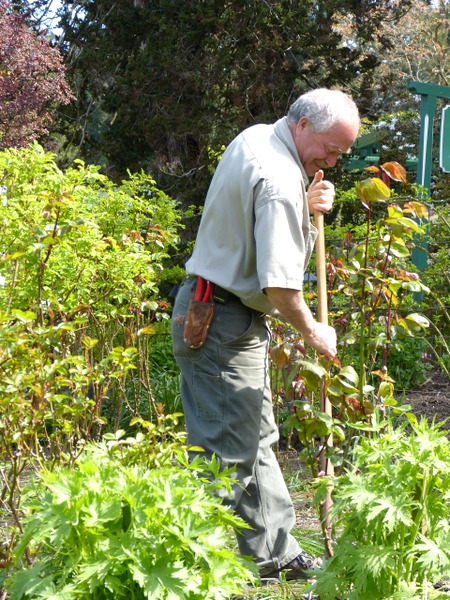 Plants are left unlabelled throughout the estate, preserving the ambiance of a private pleasure garden. Those wanting to know “What’s that?” can leaf through the Flower & Plant Guide provided to each visitor,picturing plants either commonly used in The Gardens or those attracting the most attention. Should the plant in question not be listed, the Guide suggests snapping a digital photo and stopping by the Plant Identification Counter in the Visitor Information Centre.

I didn’t think of taking a camera shot, but stopped by the counter to ask what the drift of red, spiky blooms just outside the Japanese Garden entrance might be. With no hesitation, the woman jotted down the name of the plant in question, “ Euphorbia fire glow,” and produced a picture for my verification.

While walking through the Sunken Garden, I spotted the  tall chimney of a long-abandoned kiln, the sole, primary reminder of the horticultural wonderland’s cement roots. Sharp-eyed viewers, however, will spot whimsical reminders: hand rails and arbors made of molded concrete, dead ringers for recycled tree branches. 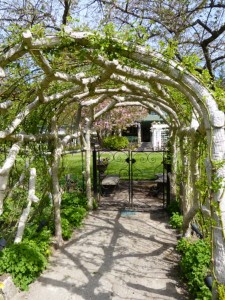 The Butchart Gardens, www.butchartgardens.com, is located on Vancouver island, 14 miles north of Victoria, B.C. The Gardens is open daily at 9 am with Christmas Day the sole exception, opening at 1 pm. Closing hours vary (4 or 5 pm) throughout the seasons as do rates.