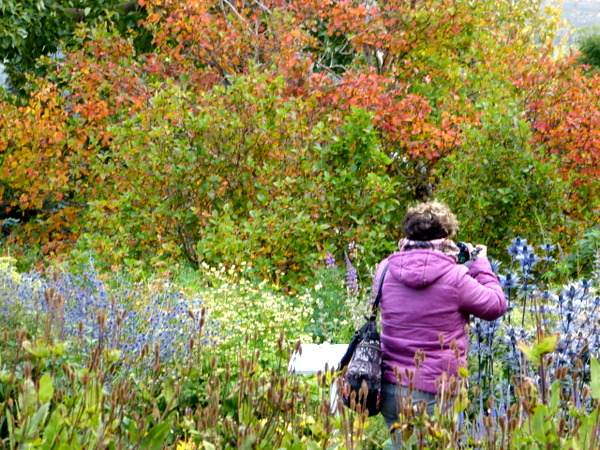 ICELAND Akureyrar – It is not the most northerly botanic garden in the world, but one of the most northerly, sharing that distinction with those hardy plants shivering on the edge of the Arctic in Norway and Russia.

No matter! When I learned of the existence of  Lystigarður Akureyrar, a botanic garden located in the far-northern reaches of Iceland in the town of Akureyri, I looked forward to wandering its paths as a highlight of my Iceland Rang Road driving adventure.

Several weeks before leaving for Iceland, I e-mailed the garden to ask if someone directly involved in its direction or care might be available to talk with me and show me about. No response. More e-mails and several telephone calls as I made my way along the Ring Road to the island’s far northern edge went unanswered.

Proximity to the arctic hard to believe …

So I was on my own – save a download of basic information from the Internet,  as I drove into Akureyri on a warm, blue-sky, puffy-white-cloud day that made it hard to believe that the Arctic was but a hop and a jump away. 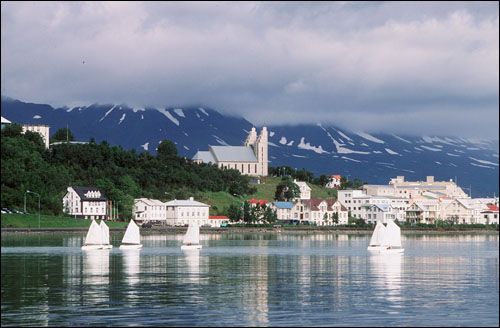 Akureyri, on the edge of the Arctic enjoys surprisingly pleasant weather.

The town, Iceland’s second largest with a population nearing 18,000, enjoys a spectacular setting: at the base of Eyjafjörður fjord, Iceland’s longest, with sheer granite mountains tipped with year-round snow as a backdrop.

As if that weren’t enough, Akureyri claims the country’s mildest climate, with cold though not severe winters and pleasant summers. If one were intent on the establishment of an Icelandic botanic garden, what better place?

Even more astounding to me than a geographical positioning that allows it to flourish virtually on the on the edge of ice is that Akureyri garden traces its roots back more than 100 years.

In 1912, a group of Akureyri women decided their city needed beautifying, so they founded the Park Society for the purpose of providing an “adornment for the town and a place of recreation.”

A hectare of land (nearly 2 1/2 acres) was set aside by the municipality – the first public park in Iceland. With that, the housewives of Akureyri went about the planting of hundreds of trees, plants and herbs, tending the hectare until it was turned over to the municipality in 1953.

The Park Society, however, remained involved in the garden after the turnover. When a private collection of plants owned by the director of the park, Jon Rognvaldsson, became available, the women recommended that the municipality buy the collection. So began the Akuyeri Botanic Garden, now extended to its current nine acres. 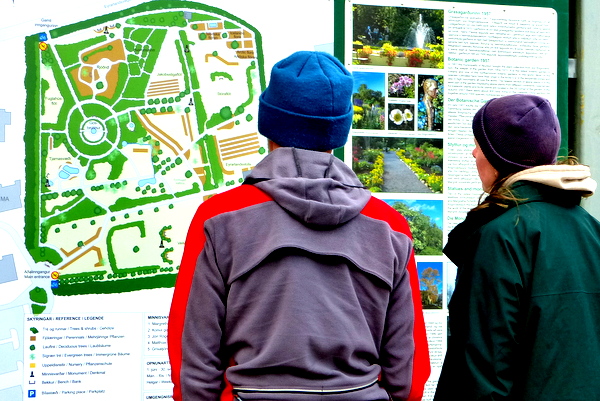 A botanic garden differs from a park in that its primary purpose is the enhancement of botanical knowledge. In the case of the Akuyeri garden, its goal is to keep and display as many species of native flora as possible while searching for nonnative species suitable for Icelandic survival. Collection trips to like climate zones of the world have resulted in garden additions.

Seed exchange, however, remains the most important source for new species. Today the garden exchanges seed with some 330 botanic gardens.

While I noted flower-filled front yards and window boxes as I drove through the town on my way to the garden, I was not prepared for the abundance of color, especially so late in the season, that greeted me at the garden’s gate. Lobelia, cosmos, dianthus, pansies, marigolds, margaritas and so much more filled beds and tumbled from pots placed along the entryway’s path. 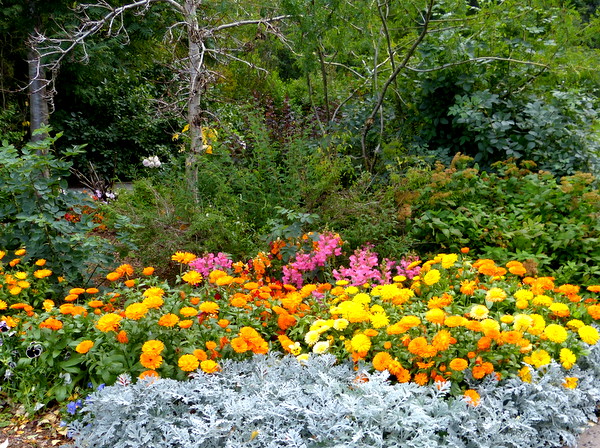 Signposts directed me to areas of the garden where varieties and species, some 7000 in all, were grouped with those that grow under similar conditions in nature – on the beach, grassland, snow patches, birch woods, marshy areas, hollows in lava fields – all in equally colorful or leafy display.

Despite its precise organization, the garden has a friendly, informal park like feel, with a fountain-centered lawn area, woodland paths and pieces of art placed here and there – contemporary pieces, along with sculpted busts commemorating those important to the creation of the garden. 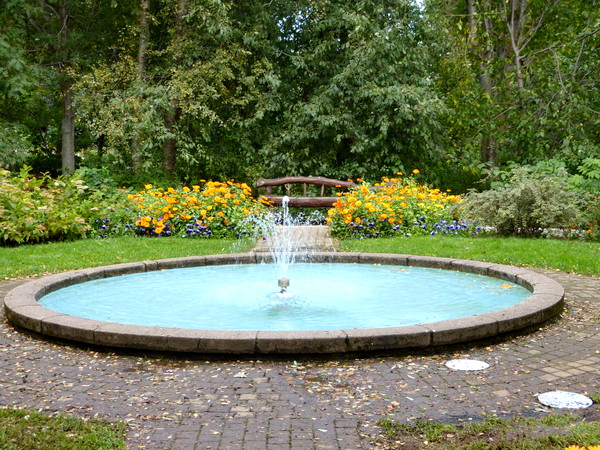 A café, added in celebration of the garden’s 100th year, built of locally-sourced materials – with wide windows into the garden framed to resemble branches of a tree –  offers a place for a cup of tea or light lunch while enjoying views of the garden. 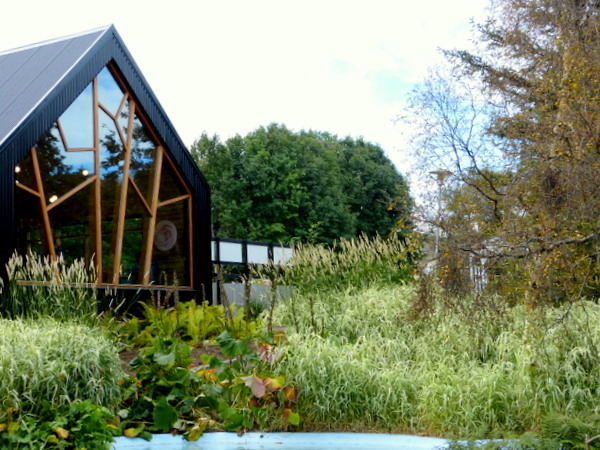 Architecture of the cafe, built in celebration of the garden’s 100th year, symbolizes branches of trees. Photo: Yvonne Michie Horn

As I walked the garden, so many questions came to mind. The big greenhouse that, when I peered in, appeared empty. How is it used? How many gardeners tend the garden? What happens to the garden during the long winter months? How much of the garden has to be replanted each year?

It appeared my questions would go unanswered until, months after I’d returned home, I unexpectedly had an e-mail from the current head gardener, Matthildur Hauksdottir, who cheerfully followed up with responses to some of my questions.

The greenhouse, geothermically heated from Akuyeri’s abundant supply, begins its work in January, when summer annuals are seeded and readied for June planting into the garden. 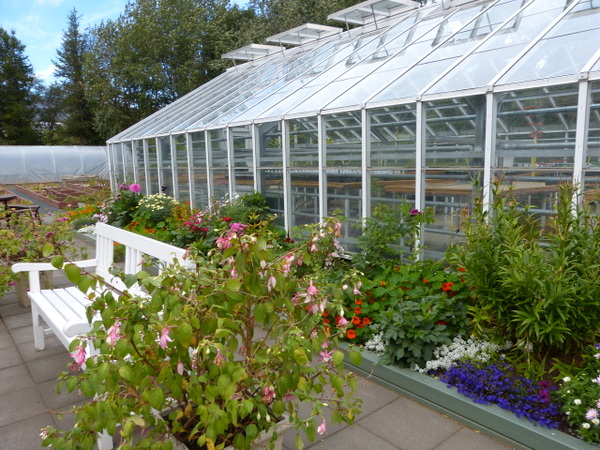 Perennial plants are then seeded – “a huge experimental work as we try seeds from other botanical gardens,” Matthildur said. In autumn, shrubs and trees are started from seed. Perennial plants remain in the garden under their winter blanket of snow, with those not surviving replaced by those coming along in the greenhouse.

The head gardener, a botanist and a full-time gardener make up the year-round team. More gardeners come “when the snow has melted.” In June, a team of teenagers arrive to take on such work as the clearing away of leaves and twigs. Disabled people are offered the opportunity to learn about the planting and care of annuals.

While I was pleased to hear from Matthildur, and would have been even more pleased had she been with me as I walked the garden’s paths, I nevertheless consider my visit to Lystigarður Akureyrar right up there with floating icebergs and bubbling thermal earth as a high point in my driving the Ring Road Iceland adventure.

Lystigarður Akureyrar’ gates are open June 1 through September 30, weekdays 8 am to 10 pm – summer days are long, especially in the north of Iceland!  Weekends 9 am – 10 pm. Admission: No charge. 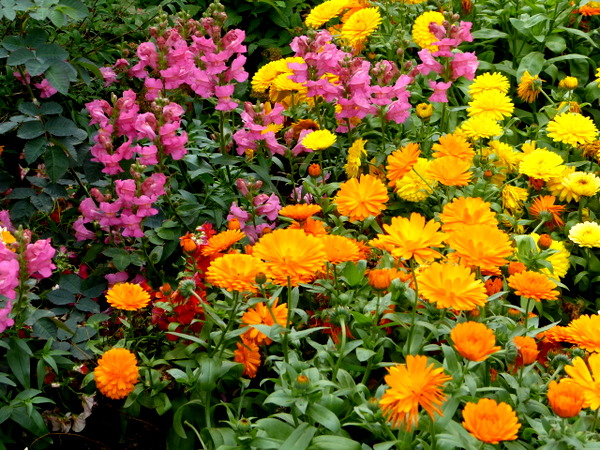