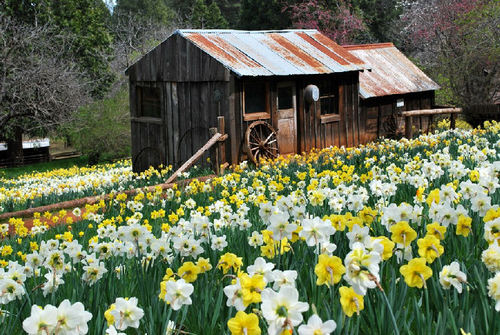 DUE TO MORE THRONGS OF PEOPLE  THAN THE SITE COULD HANDLE, DAFFODIL HILL HAS CLOSED ITS GATES TO VISITORS. THE BELOW REMAINS FOR HISTORICAL REFERENCE.

“I wandered lonely as a cloud,

That  floats on high o’er vales and hills,

When all at once I saw a crowd.

There’s something about daffodils that inspires poets to pick up their pens.  With Wordsworth’s words in mind, I wandered through the Sierra foothills on my way to find his host of golden daffodils. 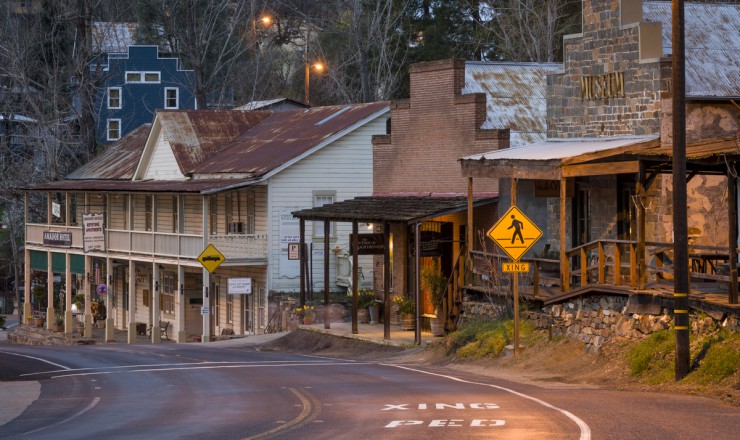 Up into  pine forests I drove, down to green-ribbon rivers, through nearly abandoned towns that once boomed in the frenzied search for gold. One must wander  gold country,  whether one wants  to or not;  the ’49er’s paths turned roads are the most indirect routes to anywhere.

Then, all at once,  I saw a crowd, a host of … good grief, people!  A traffic jam in the middle of pine forest and rock-quilted fields! I’d arrived at Daffodil Hill.

“We’ve estimated as many as 2500 on any given day at the height of bloom,”  the smiling woman who greeted me at the entrance told me  after I’d crossed the road safely, thanks to the member of the Amador County sheriff department  directing traffic. “It looks like we’ll have at least that many today.”

All come to see, as  Shakespeare wrote, “Daffodils. That come before the swallow dares and take the winds of March with beauty.”

Daffodils at Daffodil Hill are everywhere. They line the gate to the hill, edge old sheds, border the picnic grounds. They blossom under flowering peach trees, and nod their heads along rock-edged paths, and give the rooster in the chicken coop something to crow about.

But it’s the mass plantings in the open fields that take the breath away –  a  corps de ballet bending and swaying in the soft, gold country air. 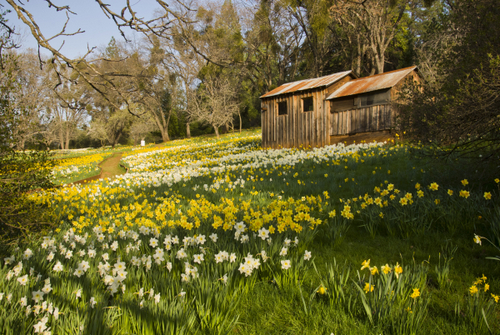 It all began more than a century and a quarter ago.  In 1887 Arthur and Lizzie McLaughlin, transplanted  easterners, bought the Hill, a 540 acre farm that also served as  a way station for teamsters hauling timber  to nearby mines

The Hill’s previous owner was a Dutchman who had brought with him a small sack of bulbs from his native land.Lizzie loved the daffodils that pushed their way through the shallow earth each spring. Every year she’d dig and replant the bulbs; the small patch grew larger and larger.

A second generation of  McLaughlins  continued the planting of daffodils.  Soon the Hill was a springtime showstopper and the first trickles of what  was to become a steady stream of spring-time visitors began to stop by. 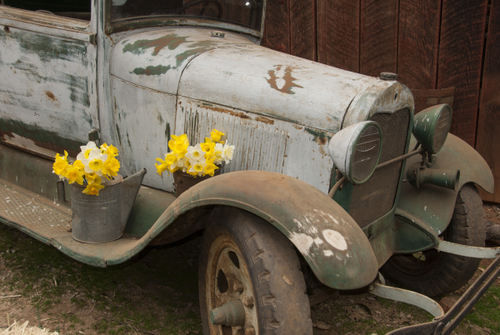 An old farm truck celebrates the season with bouquets tucked into its fenders.

A third, fourth, fifth, sixth, and now a seventh  generation of family members continued to pitch in, planting bulbs and keeping  the hill orderly during the weeks of bloom.   As  from the beginning,  there is no admission charge.  Early on, however,  as the throngs increased, an old pot was hung out for donations – still there.   Proceeds provide the wherewithal for the purchase  of new bulbs.   Some years but 500 are planted, other years as many as 6,000.

There are four acres of daffodils to wander, an estimated 300 varieties from some 500,000  bulbs.  A young boy does his best to encourage a peacock to make a fan of its tail.  A woman stops to  note  varieties:   Fortune, Mt. Hood, Red Marley.  A little girl in a Sunday-best dress begins to yell that she’s lost her grandma .  A  family member  quickly takes her hand to reassure, “I bet if you yell  ‘Grandma!’  again, we’ll have a dozen grandmas here in nothing flat.” 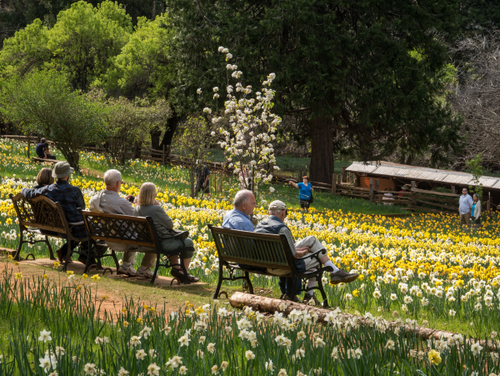 Four acres of 300 varieites of daffodils are available to wander, or sit and admire.

Despite the throngs of people, smiles are everywhere.  And somehow one can always find a secluded bench  to sit upon and  quietly take in the dancing trumpets of spring.  Bringing to mind what Sigmund Freud once wrote, “Flowers are restful to look at. They have neither emotions nor conflicts.”

The restful flowers of Daffodil Hill are open for viewing seven days a week from 10 am to 4 pm during the blooming season, usually mid March through mid April. Before visiting, be certain to phone 209 296-7048 for a recorded message advising current blooming  conditions and possible, weather-related closures.   When daffodil time concludes,  the property returns to a working ranch and is not open to visitors.