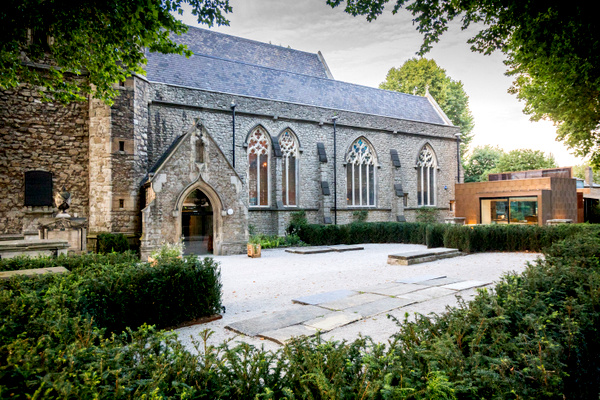 ENGLAND London – While in London a number of years back, I visited the Museum of Garden History, as it was then called, and spent a happy hour immersed in old gardening tools, artifacts and drawings, photographs and paintings.

During that visit to the museum, located in the ancient and deconsecrated church of St Mary-at-Lambeth, across the Thames from Big Ben and right next door to Lambeth Palace, I was charmed by the displays but fell in love with the courtyard’s knot garden, a replica of British estate gardens’ geometric plantings of fragrant herbs in formal angles and ribbons. 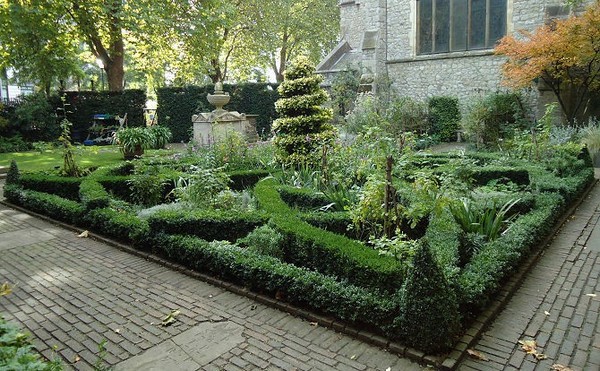 The knot garden, as pictured above on my earlier visit, fell victim to the renovated courtyard.

Through the years, I received regular informational email posts from the museum. So it was that I knew that the museum would close its doors in 2015 to undergo a renovation. When the news came of its reopening 18 months later, I made plans to return.

The museum, the first of its kind in the world, owes its existence to Rosemary and John Nicholson, garden lovers who had traced the tomb of two 17th-century gardeners and plant collectors, John Tradescant the elder and younger, to the churchyard. The tomb, a 1662 masterpiece of funeral art, was in drastic need of cleaning and repair. The church, a desolate ruin, was scheduled for demolishment to make way for a car park. 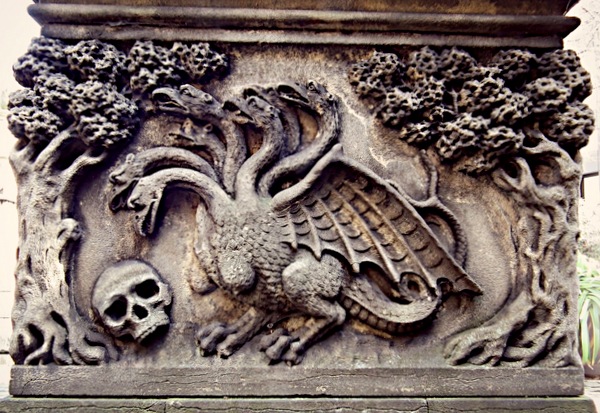 Rosemary set to work to raise funds and recruit an army of volunteers, assembling a team of prominent supporters that included the Queen Mother and Prince Charles.

Within three years, sufficient funds had been raised to roof and clean the church and restore the courtyard, which revealed not only the Tradescants’ tomb but the tombs of, among others, Captain Bligh, who had been working from the Kew Royal Botanic Gardens during his ill-fated voyage on the Bounty.

In 1981, the museum, with private donations providing the displays, was ready for its first exhibition. Queen Elizabeth officially opened the museum.

Renovation creates a “must visit” museum …

As I crossed the Thames on the Lambeth Bridge, with St Mary-at-Lambeth’s bulky stone tower straight ahead, I had the impression that nothing had changed. Oh, my, how I was wrong! A renovation tab of £7.5 million (near $10 million), of which the Heritage Lottery Fund contributed £3 million, has turned the museum into a London “must visit,” even for dedicated non-green-thumbers.

A glass-encased café with hammered-copper trim now floats on one side of the church courtyard. “Floats” is accurate, as the courtyard extension, which also includes classrooms, had to be built without foundations so as to not disturb old graves and tombs, some dating before the Norman Conquest. 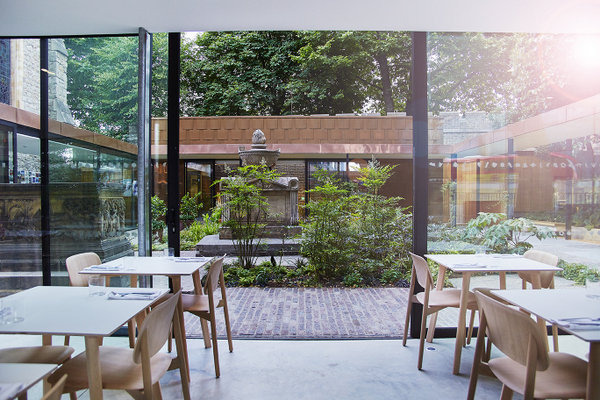 An addition to the museum containing classrooms and a café, “floats” around a courtyard, so as not to disturb the centuries-old graves below.

One gravestone that proved problematic to float above remains in place in the café’s polished-concrete floor, recording the fate of William Coward of Brixton Place in Lambeth along with that of his various wives and daughters — interesting reading material while you wait for your lunch to arrive.

The Trandescants’ tomb holds center stage in what remains of the courtyard, surrounded by plantings of unusual species in homage to the Trandescant’s plant-collecting expeditions.  But, alas, replacing the knot garden!

When I stepped inside the church, the renovated interior took my breath away. Large panels of off-white, cross-laminated timber — designed so as not to touch the protected historical walls — sheath the gallery top to bottom, replacing dark and dreary with light and airy. 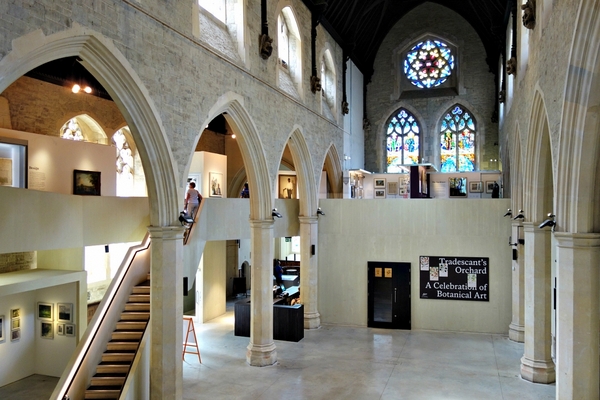 What the museum calls a Belvedere runs around the periphery, creating a second level for displays. All in all, gallery space has been expanded to allow more than 1,000 objects from the permanent collection to be exhibited instead of the fewer than 150 on view on my previous visit.

On the main floor, a side-room space housed “Tradescant’s Orchard: A Celebration of Botanical Art,” inspired by a 17th-century volume on loan from Oxford of 66 watercolors depicting fruit varieties. 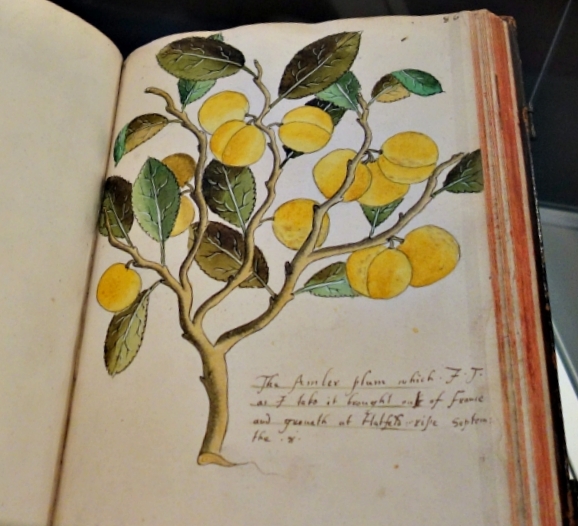 A page of the 17th-century botanical volume on exhibit, turned to a page picturing a plum.

Following a cue from Tradescant “who hath wonderfully laboured to obtaine all the rarest fruits hee can,” the museum contacted notable contemporary botanical artists asking if they’d like to participate in the show. Fifty responded with watercolors, some on velum, depicting fruit varieties John Tradescant and his son grew in their Lambeth garden. 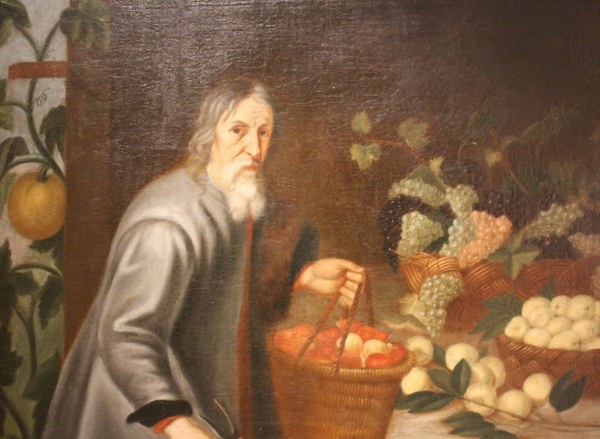 A painting of John Tradescant, gardener and nurseryman, illustrates the fruits of his labors.

Also on the main floor, a re-creation of Tradescant’s “The Ark” — natural and man-made objects Tradescant assembled in his travels and put on display at his Lambeth home. The Ark was Britain’s first public museum, open to all. Six pence entry.

Wonderful stuff, but it was the upper level, consisting primarily of contributions by private donors, that captured my gardening heart. One comes away immersed in the English love of gardening, whether it be on a large estate, behind a picket fence or in a window box.

Seed packets displayed in an Art Deco rack; clogs worn by a Kew Botanical Gardens gardener; a child-size wooden wheelbarrow; a glass cucumber straightener (whoever thought one was needed?). . . . 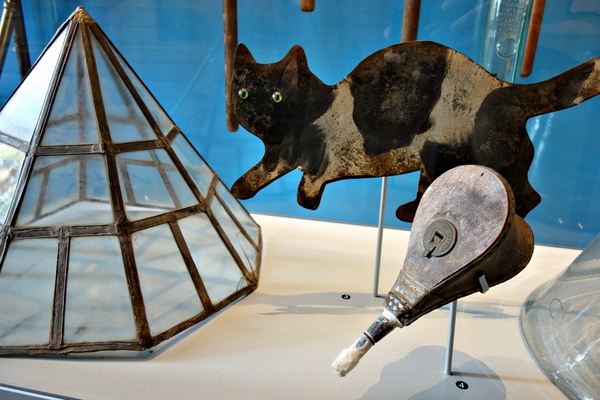 Leaded cloche, 1910, used to protect plants from the elements and pests;  1900 cat-shaped bird scarer made from tin; Vicat hand puffer,1920, used to combat flies and aphids in the garden.

A 17th-century earthenware watering can; a collection of gaudy gnomes; a book of pressed flowers, created by a First World War soldier who cut and pressed flowers during his service and sent them home to his mother; a poster for an onion-growing competition. . . .

On it goes — old gardening tools and sprayers; an unlabeled painting of a simple house with a sweet little garden behind a stone wall; a child’s elaborate setup of a miniature greenhouse, plants, gardeners and tools, to be arranged at will. . . .

In a far corner, above where the altar would be, step inside a garden shed to see a video on (guess what?) garden sheds.

Up the tower stairs …

For those willing to tackle a claustrophobic, winding climb of 131 stairs, a wondrous circular view of London awaits from a platform atop the church bell tower. It may or may not be open during your visit. Hope that it is.

A visitor from Germany, but note the British T-shirt, poses atop the church  bell tower .

The museum is accessible to wheelchair users, with a lift to the permanent collection on “Belvedere”  floor.