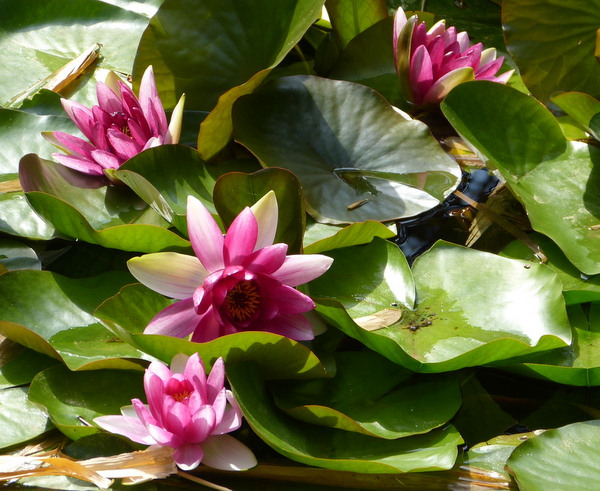 Lily pads drift in the “Aquarium,” ponds placed in the oldest part of Orto Botanico.

ITALY Palermo – It was but a 10 minute straight-shot walk on a street that managed to change its name three times between the Hotel Porta Felice where our Overseas Adventure Travel group was staying to the Orto Botanico, Palermo’s botanical garden. Apartments lined either side, with residents leaning out windows to chat. Cars were parked willy-nilly on the street and on the sidewalk, turning my straight-shot walk into a series of hazardous into-the-street detours.

And then I came across a living room. A ground-floor resident had expanded into the sidewalk and street parking space, lined the appropriated area with large terracotta pots planted with flourishing shrubs and furnished it with arm chairs and a sofa.

It seemed not quite right to march straight through, so around the “living room” into the traffic I went. As I walked around the flourishing plants, the thought occurred that I’d blundered into a contemporary artist’s installation conceived to somehow tie the neighborhood to the botanical garden up the street.

One glance at the no-nonsense sphinx sculptures guarding the steps of the garden’s imposing central building, however, and I thought not so. Here was a garden that has taken itself seriously for over 230 years. 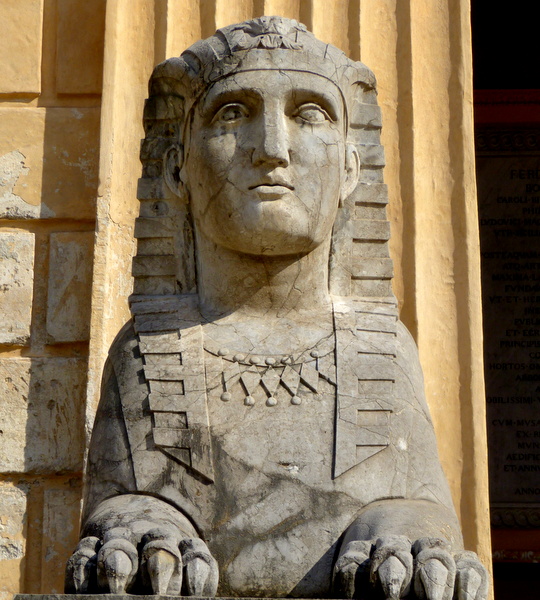 A duo of Sphinx  stand guard at the Orto Botanico’s  administrative Central Building.

Now overseen by the University of Palermo’s Department of Botany, the garden dates back to 1789, when a small plot of land was set aside for the cultivation and study of plants with medicinal benefits. Need outpaced the space and, at the request of eminent academics, the Sicilian viceroy, Francesco d’Aquino, Prince of Caramanico, commissioned French and Italian architects to design and create a magnificent garden in the heart of the city.

Neo-classic administrative buildings set the scene. A rectangular garden of four quadrangles was organized according to a new standardized system of classification and naming of species devised by Swedish naturalist Carolus Linnaeus, a system universally used throughout the botanical world today. The new garden opened in 1795.

The original part of the garden was recently restored, giving visitors the opportunity to stroll its centuries -old avenues. At least 658 of the original 1,580 different species still exist. Among notable plant history found there is the Cycas revoluta, commonly known as sago palm, donated in 1793 by Queen Maria Carolina, the wife of Ferdinand IV, King of Naples and Sicily. 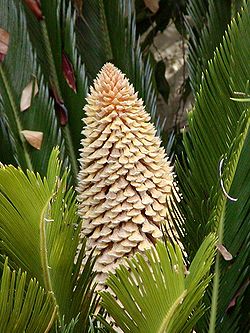 The garden expanded to its current size, 10 hectares (near 25 acres), during the Victorian era, a time of extraordinary exploration during which plant collectors sallied forth into the far corners of the world intent on bringing back the rare, weird and beautiful. The Palermo garden, gifted with a benign climate, became an important repository for the unusual and the exotic.

A place to explore …

Throughout the garden, hundreds of terracotta pots lined walkways, filled greenhouses, enhanced planted areas . Most astounding was a multi-tiered alley of terracotta  pots, identical in size and design, planted with species of cacti. So many terracotta pots! Perhaps the Orto Botanico had inspired the “walls” of the sidewalk “living room” encountered en route. 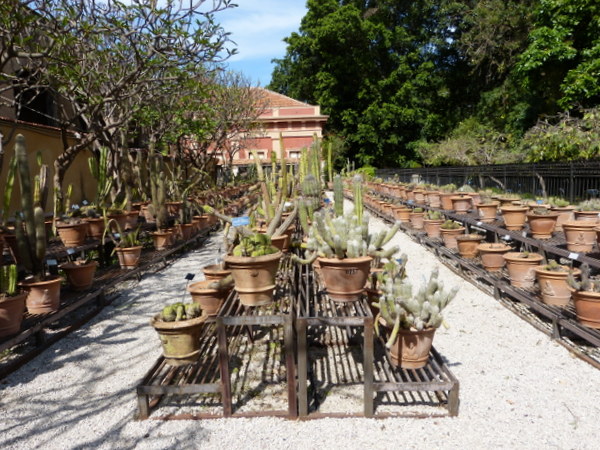 Hundreds of identical terracotta pots contain cacti collected from all over the world.

Unlike newer botanical gardens I’ve encountered in the world, manicured and precisely organized, many areas of the Palermo garden appear as if they’ve sprung up from the wild. It was an ambiance I enjoyed as I wandered into its depths.

In a far corner of the garden I came across the ruins of the Church of Saint Denis, a 14th century reminder that the area was once claimed by the Diocese of Palermo. 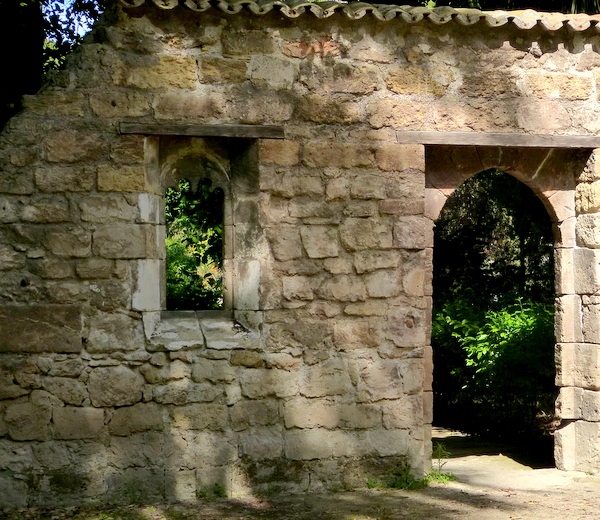 I passed a forest of bamboo; citrus of all sorts, introduced as a donation from the British Royal Navy between 1812 and 1817; the gigantic Ficus macrophylla,  imported from Australia’s Norfolk Island in 1845, its aerial roots extending into a 1000 square meter jungle. 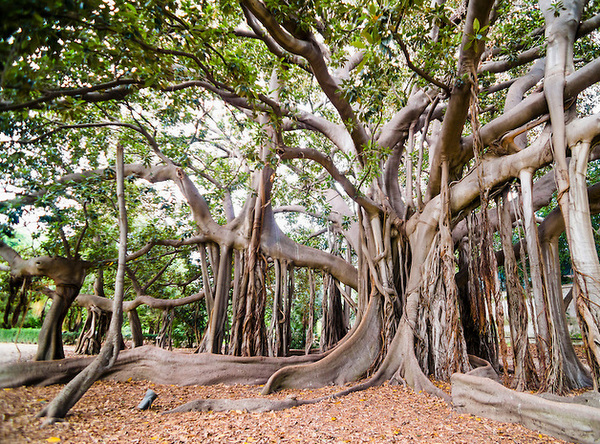 Centerpieces of the original garden are the lovely glasshouse known as the Giardino d’Inverno (Winter Garden) and the ponds known as the Aquarium. 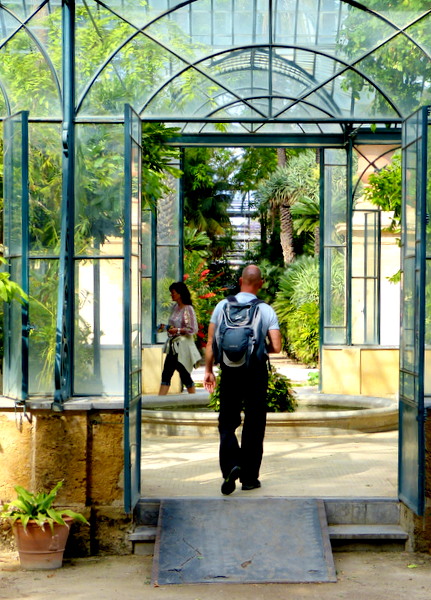 Visitors enjoy a stroll through the glasshouse. Originally wood framed, a century after its 1823 construction it was rebuilt in cast iron.

The glasshouse, welcomed as a gift from Queen Maria Carolina in 1823, was originally constructed of wood and heated by stoves. A century later it was completely rebuilt in cast iron.

The Aquarium, built in1793, consists of three concentric pools where goldfish dart among floating lotus flowers and turtles laze in the sun. 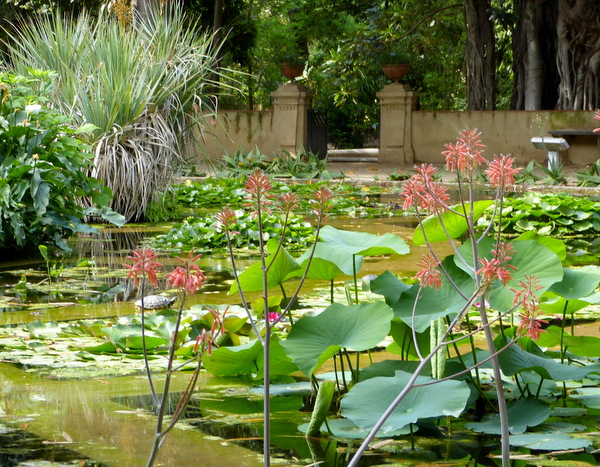 One of the Aquarium’s three pools. Note the turtle sunning in the left-hand side of the photo.

The garden is open daily, except for Easter, Christmas and New Year days, 9 am with closing depending on season. Web: www.ortobotanico.unipa.it.