Goldfish swarm around a tropical plant in a Hallington Siculor’s pond with one of Florence Trevelyan’s Victorian follies in the background.

ITALY Taormina –  Before traveling,  I spend hours leafing through guidebooks  and gardening books and on the Internet searching  to match my itinerary with a possible garden, or gardens, to visit. What I’m looking for is not just  any garden,  no matter how lovely, but for one that fulfills a personal criteria.

It must be a garden with a story to tell, a garden that could be nowhere else than where it is and, if at all possible,  one that reflects the gardening passion of the person who created it.

With an “Aha!” I came across  Florence Trevelyan’s garden  in Taormina, Sicily.  Here was a garden that not only meshed perfectly with my Overseas travelAdventure Travel Sicily tour, but met all three requirements!

Who was Florence Trevelyan? …

Numerous sites on the Internet provided scintillating, yet conflicting, details about how and why this young English woman from Northumberland, England’s  northernmost county, traveled to Sicily in the late 1880s and never returned home.

Choosing bits and pieces and putting them together, here is the account that pleases my gardening and storytelling imagination the most.

Although Florence was often referred to as Lady Trevelyan, as the daughter of a son of a baronet an official “Lady” she was not.

When Florence was but a small child, her father committed suicide. Her mother, Catherine Ann, moved the family to nearby  Hallington. There she, and later Florence as she approached adulthood, developed a keen interest in establishing “pleasure gardens,” gardens open to the public for recreation and entertainment.

While Florence was not official aristocracy, as a Trevelyan she was “well connected” – so well connected that she was welcomed into the household at Balmoral, where Queen Victoria  fostered her growing up, in particular sharing with the young Florence her passion for dogs and plants.

Queen Victoria and Florence in their happier days.

So it continued until a dalliance between Florence and Edward VII, Victoria’s eldest son  and heir to the throne,  came to the queen’s  attention. She was not amused.

Florence was banished not only from court but from Britain. Bankrolled by the queen’s  order to pay her an allowance of 50 pounds a month, Florence embarked on a Grand Tour of Europe.

As our tour bus wound its way into the mountains toward Taormina, it was no wonder to me why Florence decided to remain in this small corner of Sicily. Views over the Ionian Sea were spectacular.  As we approached the perched town, we paused by the side of the road to take a look at Isola Bella,  a rocky outcropping attached to the mainland by a swath of pebbled beach when the tide is low. 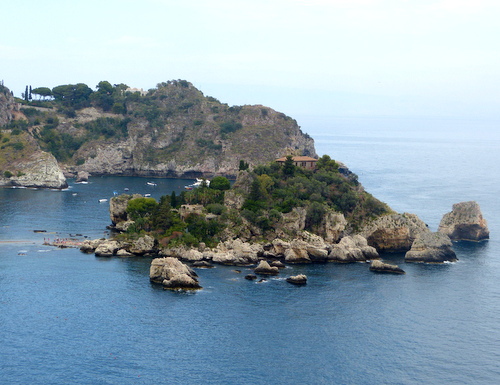 Florence’s first garden, is today protected by the World Wide Fund for Nature.

Isola Bella, “Beautiful  Island,” was so named by Florence.  Soon after her arrival in Taormina, she bought the rocky out post, built a small house near its summit and set about establishing a garden of Mediterranean native plants interspersed with exotic shrubs and grasses. Delighting in the bird life attracted to the island, she became an outspoken pioneer for Italian bird habitat conservation.  Isola Bella today is a designated Protected Natural Site administrated by the Italian branch of the World Wide Fund for Nature.

Some accounts give the date as 1890 that Florence married Taormina’s wealthy mayor Salvatore Cacciola and moved from the island and into town. Cacciola gifted his bride with a parcel of land exquisitely positioned on a  terrace overlooking the sea.  Immediately Florence embarked on the creation of another garden,  Hallington Siculo,  “Sicilian Hallington,”  in memory of her Northumberland gardening pursuits with her mother.

With  more than its fair share of grand palazzi,  grandiose churches and cozy osterias, not to mention a magnificent 3rd century BC Greek theater right in the middle of town and a breathtaking setting overlooking the sea, Taormina is too good to remain touristically unspoiled.  On the day of our visit, throngs elbowed  their way down the Corso Umberto, the shopping street that cuts through the town’s center.

With a sigh of relief, I left my traveling companions to their window shopping  while I made my way down blessedly non-touristed, cobbled side streets to Hallington Siculo, known today as  Villa Comunale, a public garden. There locals come to stroll a bougainvillea-edged promenade overlooking the sea, and sit in the sun while bambini  run about in a tiny playground.

Florence’s Hallington Siculo is today a favored spot for locals to stroll the seaside promenade.

Florence’s horticultural  efforts remain most intact in the northern end of the garden , where there are   plantings of native species  interspersed with exotic, tropical flora flourishing  in a nucleus of trees – olives, pines, cypresses, palms.

A flurry of follies enhance the garden  …

Most astonishing here, however,  is her collection of “Victorian follies,”  eccentric  pavilions constructed  from what appears to be architectural salvage – stone, brick, pipes, bamboo, lava rock, pieces of lumber. 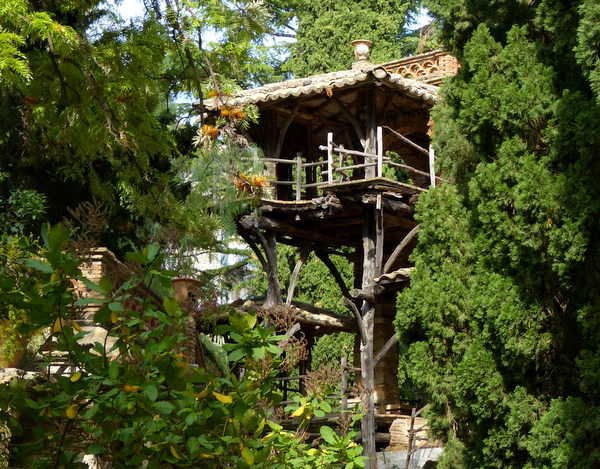 Wondrously gimcrack, multi-storied with balconies, verandas and  flights of steps going nowhere their sole purpose was  atmosphere.  One can imagine them strung with lanterns on a summer evening, guests milling bout, music wafting through the garden.

It is said, that on more than one occasion Edward VII was in attendance …  but only after Victoria’s death.

Hallington Siculo, Taormina’s public garden, is open 9 am to midnight in the summer, 9 am to 10 pm in the winter. Gates are open, no admission charge.