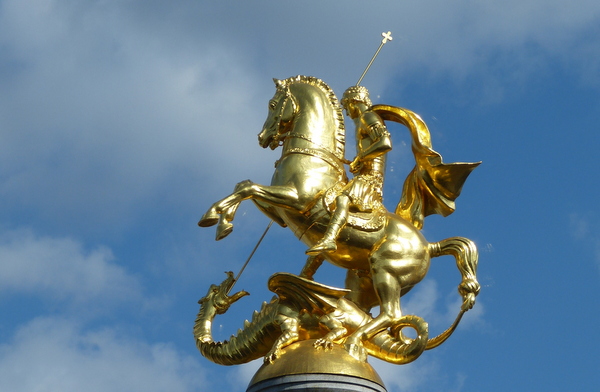 GEORGIA Tbilisi – My taxi awaited below the tall column topped with the gilded statue of Saint George slaying the dragon in Tbilisi’s Freedom Square.

Freedom Square is how it is known today. Before St. George towered over the square following the dissolution of the Soviet Union in 1991, it was known as Lenin Square, with Lenin holding forth as its centerpiece. Before that, Theatre Square, as it was the site of the city’s first opera house. Before that, and as laid out by czarist Russia, Yerevan Square, in celebration of the 1827 victory over the capital city of neighboring Armenia.

I was on my way to visit a garden, after seven days of trekking through Georgia’s pre-medieval, medieval, Soviet-era and present-day-democracy history. For an hour or two, I was free to leave all that behind in Freedom Square (which, by the way, is known as Liberty Square if you’re on the metro).

Gardenia, in Georgian, means “garden” — and not the perfumed white flower popular in prom corsages; the garden I was heading for is universally beloved by Tbilisians and known simply as Gardenia. Those looking it up on the Internet, however, must type in “Gardenia Shevardnadze” to reach its website. Zura Shevardnadze is the garden’s owner. 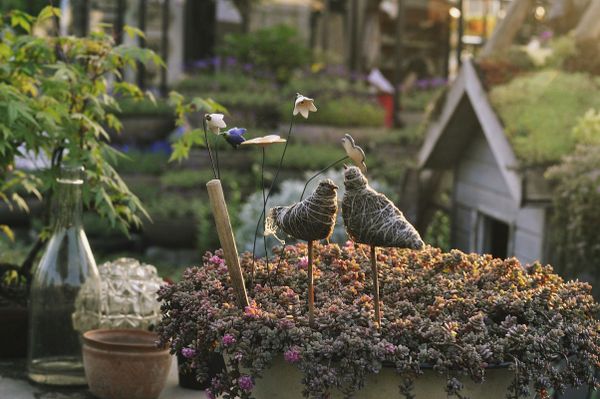 Lovebirds nestle in a bed of succulents, one of imaginative displays found throughout the garden.

On the website, one learns that Gardenia is not only a pleasurable garden to visit but a nursery providing ready-to-go plants grown in its greenhouses.

Locals are drawn, time and time again, to Gardenia, whether or not they have additions to their home gardens in mind, because they never know what they will find when they walk through the gate. 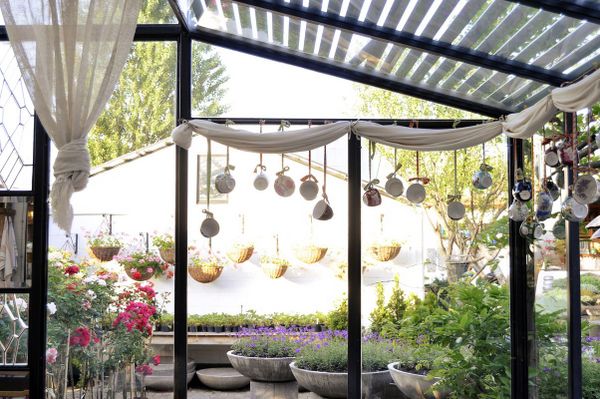 Whimsical and ever- changing displays keep visitors wondering what they’ll come across next.

Perhaps there will be an assortment of teacups dangling from the trees; a rusting Soviet-era car with greenery peeking out of its windows tucked into a far corner or left parked outside the gate in a tumble of terracotta pots;  or a brightly painted grand piano, its lid propped up, with the space where the strings should be turned into a bed of greenery. 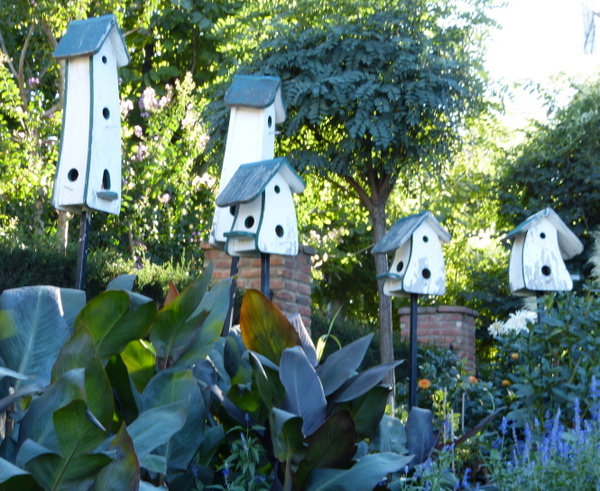 One beloved constant is a lineup of oddly shaped bird houses perched on tall poles.

My visit was in late September, harvest time. Wire baskets dripping with grapes, apples and pears hung like chandeliers here and there throughout the garden.

From the garden gate, the upper part of Gardenia serves as a densely planted showcase of what one might find for sale. As I wandered its pathways, I found myself wishing that Gardenia was not quite so beloved by locals, most of whom appeared to have come solely to click selfies and besties posed in the flora-packed whimsy. 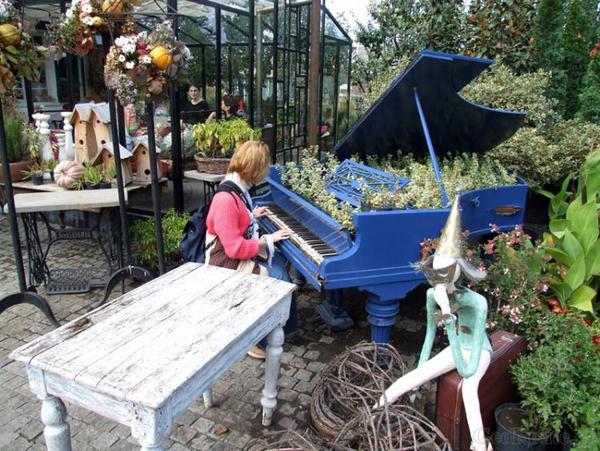 No, the blue piano is not playable, which doesn’t dissuade this visitor from giving it a try.

A garden in two parts …

A small café at the bottom of the slope effectively divides Gardenia into two parts. Best described as “grandmother’s cottage,” it provides a cozy spot to enjoy coffee and a pastry. 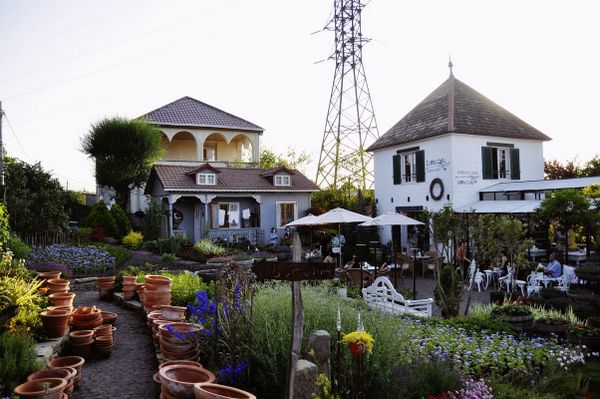 The Little Cafe, in the center of the garden, is a cozy and welcoming place for a coffee and pastry.

Behind the café, Gardenia begins to resemble a traditional garden nursery, with identical plants positioned in neat rectangles. But here, too, the unexpected continues. 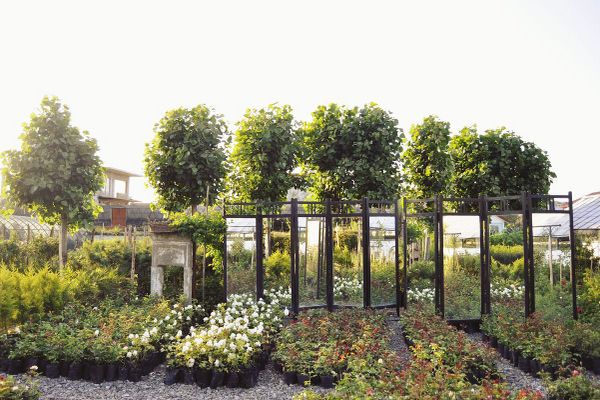 Ingeniously angled mirrors, enlarge the space and add interest to Gardenia’s “business” half.

I caught myself wondering “Who is that?” until I realized it was me reflected in mirrors cleverly angled to visually enlarge the space. So abundant and artistically arranged is this portion of the garden that a wedding was underway in a secluded corner.

I found Zura Shevardnadze in a greenhouse, his arms full of potted pepper plants. He was instantly recognizable from pictures I’d seen on Gardenia’s website — a chubby man with an engaging smile wearing his trademark hat, with a replica of a watering can pinned above his gardening apron.

As I introduced myself, he beckoned to a worker to help us converse, as he speaks no English and my knowledge of the Georgian Kartvelian language extended no further than “Hello,” “Good-bye” and “Thank you.”

With pride, he told me that all of the garden’s flora is indigenous to the Caucasus region, which boasts an incredible 4,200 species of plants. So abundant and diverse is the area that in the late 19th and early 20th centuries, plant hunters in search of exotic and unusual specimens to take back to Europe and the New World considered the area prime searching territory. 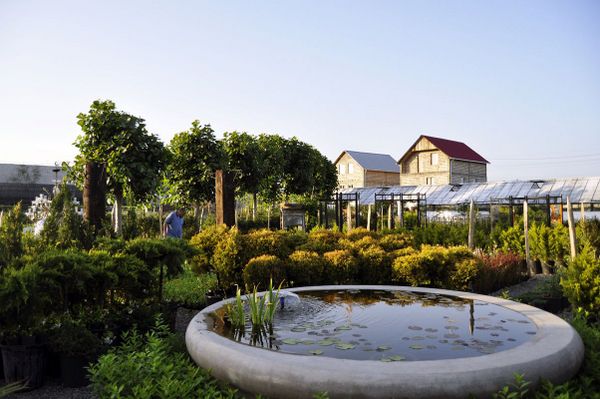 Gardenia proudly propagates the abundant and diverse plants indigenous to the Caucuses.

In bits and pieces, I learned that a lifelong love of plants and gardening took Zura to Germany’s University of Bonn, where he earned a doctoral degree in botany and biology. Returning to Georgia, he found a neglected piece of land on the outskirts of Tbilisi and set about creating his own, very original, version of Eden.

Putting down his armload of pepper plants, with a big smile Zura spread his arms wide. “Gardenia is my life!” he said.

Visiting hours depend on the season, but Gardenia (phone [032] 224 6703, email [email protected] or visit www.gardenia.ge [can be translated]), at the end of Khudadovi Street in Tbilisi, Georgia, was open 9 a.m.-7 p.m., Tuesday-Sunday, at the time of my visit. A small admission fee is charged. 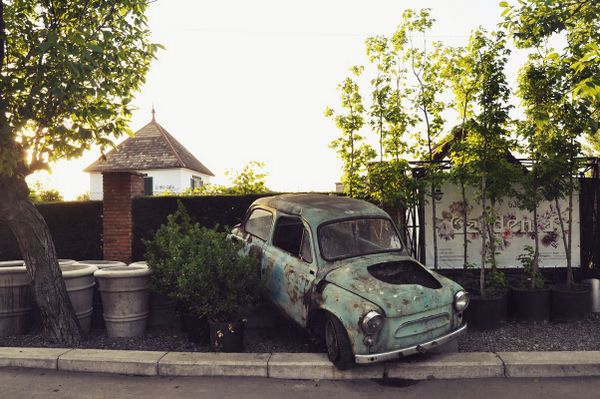