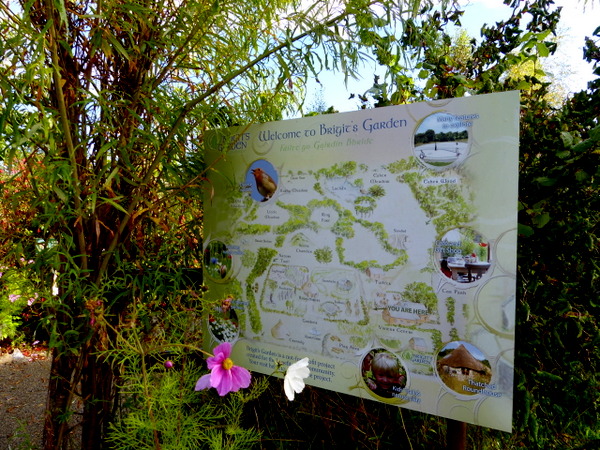 A map at the garden’s entry guides visitors through eleven acres of gardens and woodlands.

IRELAND Galway – In 1997, Jenny Beale woke one morning with a concept for a garden full blown in her mind. Grabbing pencil and paper, she quickly described in two paragraphs what had popped into her head.

“Those two paragraphs continue to accurately describe the garden as you see it today, “Beale told me over a cup of tea in the café in the visitors’ center of the dream-turned-reality garden. 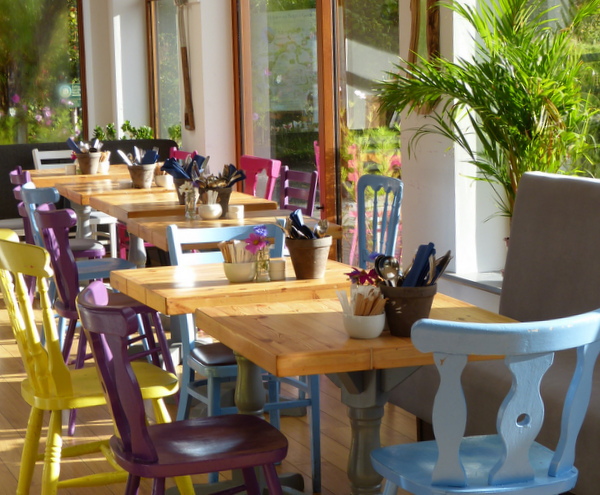 The light-filled café invites loitering over a cup of  tea and a pastry, or enjoying a full lunch menu.

Brigit, pagan goddess of poetry, healing, smithcraft and agriculture, among a lengthy laundry list of other diverse attributes, had been worshiped by the Celtic people long before the birth of Christ.

So strong was her following that when the Christian church came to Ireland, there was little hope of making converts if the beloved goddess was demonized. To solve the problem, the church incorporated the goddess, deeming that the many ancient legends and deeds surrounding her were worthy of sainthood. 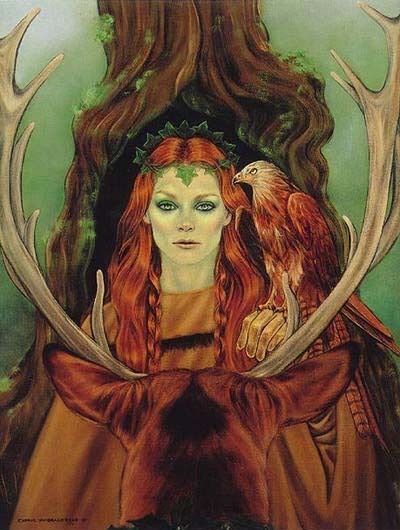 Artistic renderings of Brigit abound. Above is one.

“The two inseparable Brigits, goddess and saint, are closely tied to the Celtic cycle of seasons, which also mirrors the cycle of life,” Beale continued as we sipped our tea. “Celtic festivals, rich in symbolism, mark the four divisions of the year and remain important to the Celtic people.”

Garden based on Celtic festivals …

Brigit’s Garden, as visualized by Beale, would consist of four interconnected gardens based on the seasonal festivals. To bring her concept to reality, she looked to Irish landscape designer Mary Reynolds. 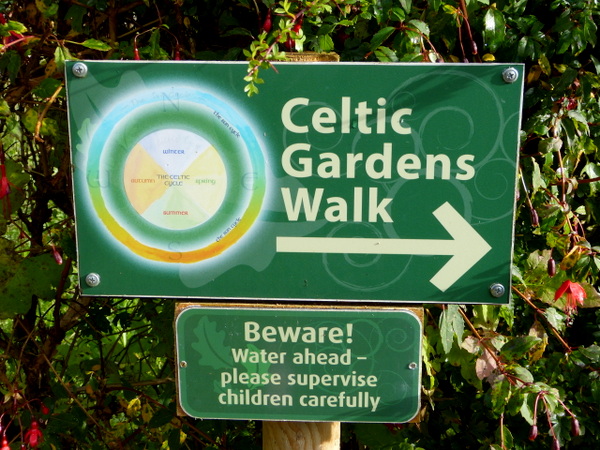 Signage points the way to the four interconnected gardens and the woodland walks beyond .

In the summer of 2004, Brigit’s Garden opened on 11 acres of meadows and woodlands in County Galway as a nonprofit, educational trust.

A reconstruction of an Iron Age roundhouse, centers the garden. Built by craftspeople from six European countries learning traditional skills on a European Union-funded project, the thatch-and-stone roundhouse serves as a space for workshops and meetings or a meditative spot for visitors as they look out windows into each of the four gardens. 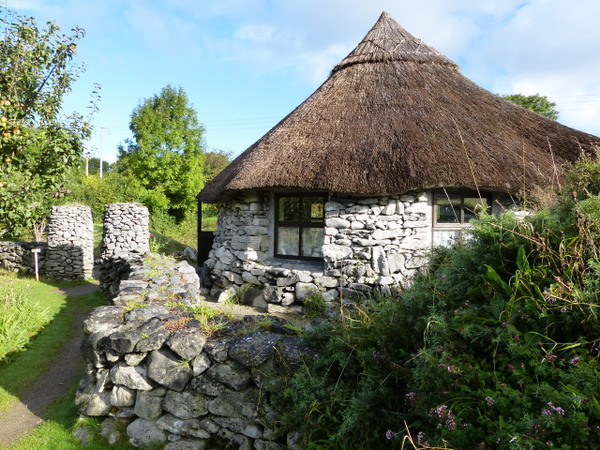 A thatch and stone reproduction of an Iron Age roundhouse, windows added, centers the garden.

The Winter Garden, representing the festival of Samhain on October 31st, is a logical place to begin a garden journey, as Samhain marks the start of the Celtic new year.

A female figure cast in bronze, the Earth Woman, sleeps on the bank of a birch-edged lily pond. It’s a quiet garden, a place to reflect on winter as a time of dying yet with the promise of rebirth as the calendar turns the corner. Come spring, the Earth Woman wears a dress of wildflowers and grasses. 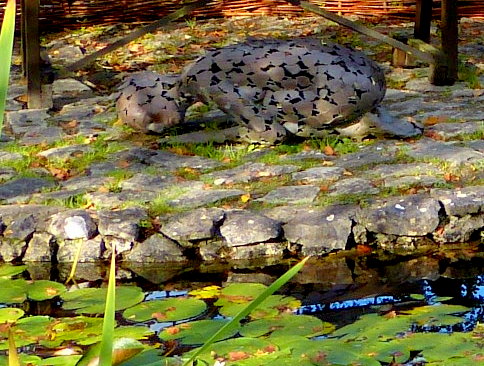 Dying, yet rebirth, is symbolized in the Earth Woman resting on pond’s edge.

Next is Imbolc, also known as St. Brigit’s Day. Falling midway between the winter solstice and the spring equinox and most commonly held on February 1st, festivities welcome the coming spring.

The land reawakens; snowdrops herald the season. A path leads through a wildflower meadow and an orchard of apple, pear and plum trees to a children’s glade where basket swings delight visiting youngsters. Grownups too. 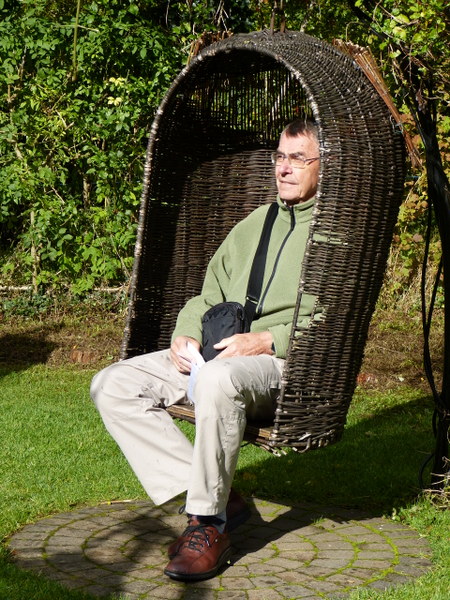 Not only kids enjoy the Imbolc garden’s swinging baskets.

The fire festival of Beltaine, on May Day, welcomes the warmth of summer with a celebration of the heat of young love. A wildflower- bordered hollow faces the sun; a path between tall limestone pillars is marked by flame-shaped “stepping stones” created from old, copper hot-water tanks. 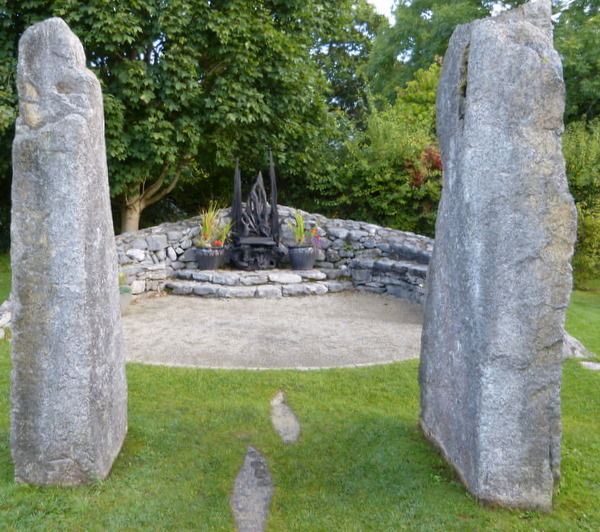 A hand-crafted throne is center to the garden. Stepping stones leading to it are crafted from old copper tanks.

Follow the path to the ceremonial fireplace, where a wood-crafted throne awaits a young adult burning to become the king or queen over his or her life.

Abundance and gratitude are the theme of Lughnasa, autumn’s festival. Earthen mounds reminiscent of harvest baskets are arranged to form the constellation of Orion, which has been associated with the Celtic god Lugh; interlinked stone circles create spaces for feasting and dancing.

Leaving the Lughnasa garden, a stand of three yews — a sacred tree of death and rebirth — reminds that while seasonal cycles come to an end, the beckoning of a new cyclic year always lies ahead.

But there is more to wander in the 11-acre Brigit’s Garden than the four seasonal gardens. I followed the Sun Trail that took me on a path through surrounding native woodlands and meadows. 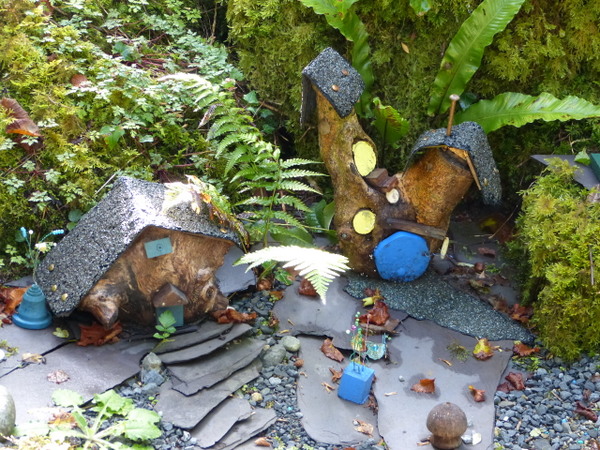 A village of tiny fairy houses hides behind fallen leaves.

Surprises abounded along the way. In a dense wooded area, I came across a fairy village of tiny houses hiding in the fallen leaves of the trees above; a lochán, a small lake, where dragonflies darted about; “spiderwebs,” hanging from tree limbs, created out of circles of branches and lengths of yarn, and a massive sundial that marks not only the time of day but calendar months as well. 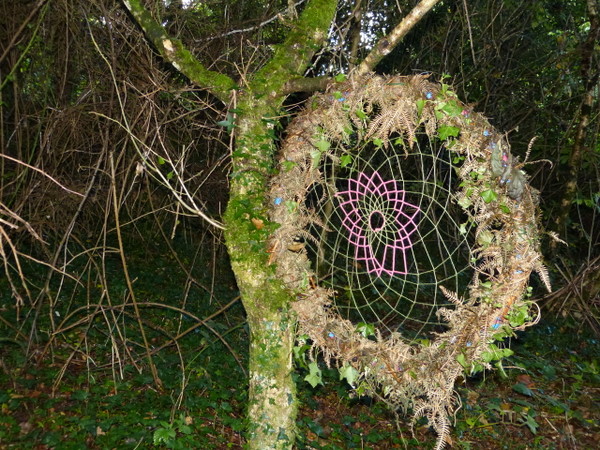 I returned to the café to say good-bye to Jenny Beale. But, also, when one has wandered through an entire Celtic year and beyond, a cup of tea and a large slice of cake seems called for. 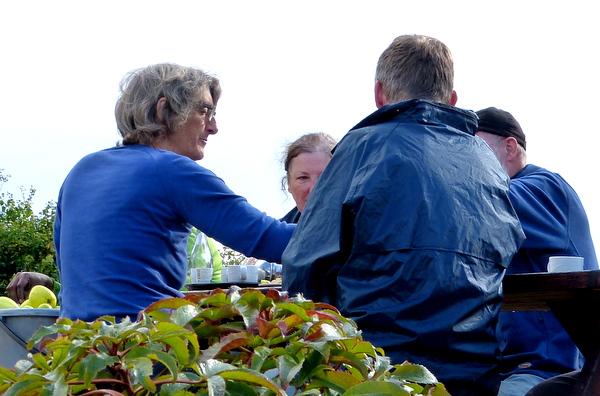