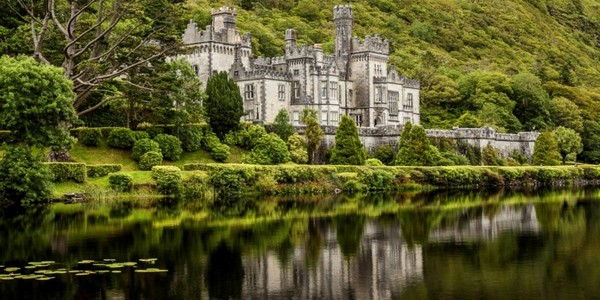 Kylemore Abbey, once the castle-like home of the Henry family,  has become a “must-visit” Ireland attraction in County Galway  along with its Victorian walled garden.

IRELAND  Connemara – The  Baronial-style castle, known today as Kylemore Abbey, was mirror-imaged in Pollaacapull Lake this September day. Clouds scudding across grey-blue skies wound their way in and around the grand edifice’s shimmering reflection .

The castle’s setting against a wooded mountainside at the edge of the lake was breathtaking. Who could look at it and not wonder, “What’s it like inside?”

Regularly scheduled tours offer visitors the opportunity to traipse through several of the castle’s public rooms, a possibility that I’d placed in my “if time allows” mental folder before embarking on the hour-plus drive north from Galway City into the Connemara countryside. The reason? I wanted to spend as much time as possible in its six acre, 19th century, walled garden. 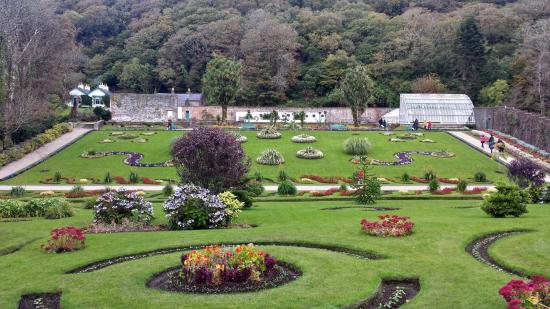 An overview of the “pleasure” side of the six-acre garden, planted in colorful circles and swirls as was the fashion of the Victorian era.

Whatever reason for making a trek to Kylemore – castle, garden, or both – step back to the mid-1840s when Mitchell Henry and his wife Margaret honeymooned in Ireland, spending time at an idyllically-situated hunting lodge in Kylemore.

Fast forward twenty years, during which Mitchell, a skilled London surgeon, abandoned his medical career when he inherited his family’s Manchester textile manufacturing fortune. Declaring himself Irish through and through, he entered liberal politics. For 14 years, Mitchell represented Galway County as a member of parliament.

In the late 1860s, as a token of love for his wife and country home for their family of nine children, Mitchell purchased the Kylemore hunting lodge site and 13,000 surrounding acres. In 1867, the castle’s foundation cornerstone was laid. Four years later, with over 100 workmen involved in the task, the castle was ready for occupancy – 70 rooms showcasing the latest in  Victorian-era furnishings and technology .

At the same time, the walled garden was also under construction – out of sight of the main house as was the tradition of the time – at Kylemore, a mile away.

There, too, innovations of the era were incorporated, among them a complex system of 5000 feet of hot water pipes heating 21 glasshouses in which were grown such exotics as bananas, melons, nectarines , pineapples, wine grapes, tomatoes.

Beyond providing an elaborate country estate for his family, Mitchell Henry had another vision for Kylemore. With much of Ireland still staggering from the economic depression of the 1845 – 1852 Great Irish Famine, he saw the estate as an avenue of proactive and compassionate help for the people of Connemara.

The house and garden provided employment for an army of people. In addition, 125 tenant farmers worked the estate with Henry providing shelter, good pay, and a school for the children. 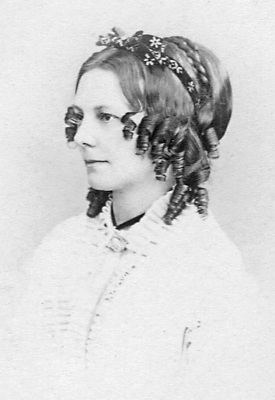 Tragedy struck in 1903. While the couple traveled in Egypt, Margaret fell fatally ill. Heartbroken, Mitchell Henry left Kylemore and returned to England. In 1909, he sold the estate.

A slide into decline …

But times were changing. The old landscape of over-the-top mansions, deference, and cheap labor were on their way to no more. Kylemore’s castle, estate and garden gradually slid into decline.

In 1920, a community of Benedictine nuns fleeing war-torn Belgium purchased Kylemore. The castle became their Abbey, in which they opened a reincarnation of the girl’s international boarding school and day school they had left behind in Ypres. In 2010, the last student received her diploma; the school closed, with the nuns already involved in new educational and tourism endeavors.

“For a good time after their 1920 arrival, the nuns did their best to maintain the garden,” Anja Gohlke, into her 16th year as Abbey head gardener, told me over a cup of tea in the garden’s tea room. “And they did manage to always keep much of the vegetable garden going.” 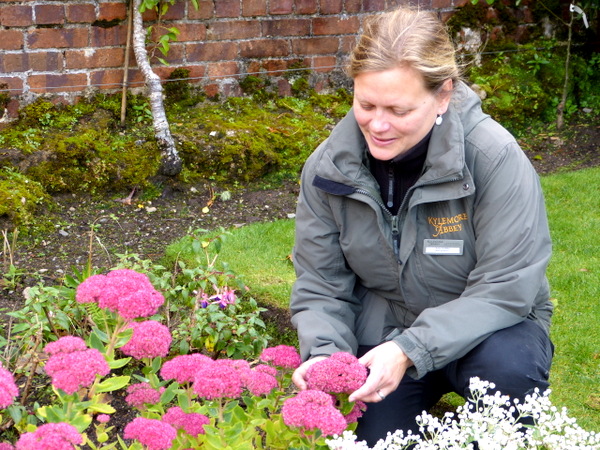 Anja Gohlke,  head gardener since 2001, first came to Kylemore as an intern.

Anja, who studied landscape architecture at an East Berlin technical college, came to the garden as a three-month intern, returning later as assistant to the head gardener. When the head gardener left, she was offered the position.

“By the 1950s,” Anja continued the garden’s narrative, “all had gone wild.” Overgrowth smothered the plantings, cows wandered through, of the 21 glasshouses 20 had collapsed. Anja compared its plight to that of Cornwall’s Helligan Lost Gardens.

Reprieve came in 1994 with the Great Gardens of Ireland Restoration Programme, grant-aided by the European Development Fund and targeted toward gardens of significance with the potential to sustain tourism. The Kylemore Abbey application was accepted. 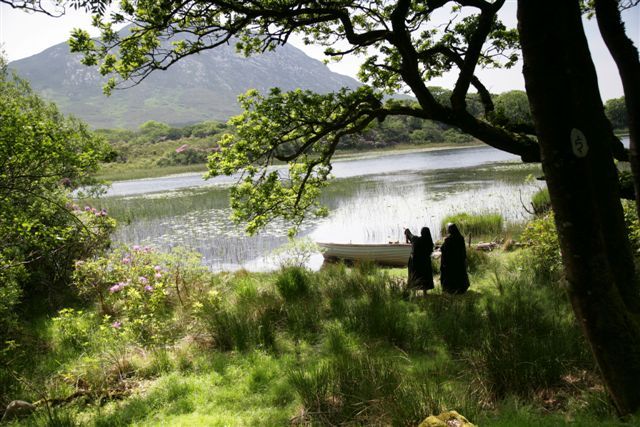 A Benedicitine community of nuns from war-torn Ypres, in the 1920s re-established themselves in Kylemore.

Restoration, although painstakingly slow, was aided by a description of the garden that was  included in Mitchell Henry’s 1903 sale of the property. “Even so, it took two years just to uncover the original pathways!” Anja said.

“But there was no plant list, ” she continued, “and everything – shrubs, perennials, bedding plants, fruit trees, varieties of vegetables – had to be true to Kylemore’s Victorian past.”

Nineteenth-century photos were found, a few bills of sale located, local folk memory relied upon. In 1999 the garden opened.

Anja accompanied me to the garden. As we walked through an upper gate, the entirety of the garden was revealed below in the shape of a wide V, its base puddled this day in off and on drizzle. 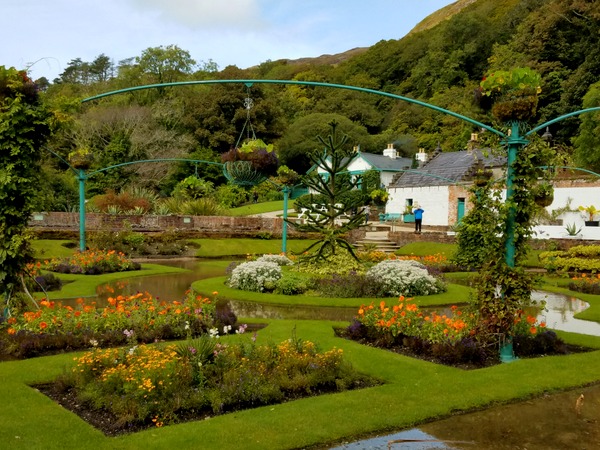 Anja pointed out the woodland and fern-bordered stream dividing the garden. One side, the pleasure garden,  featured colorful swaths and borders of perennials and annuals; on the other, the production garden in which vegetables are grown.

Finding suitable historical material for both, continues to send  Anja on a never-ending treasure hunt through obscure seed catalogs and nurseries in a search for still-available Victorian-era  varieties or today’s near equivalent.

Anja bid me goodbye, leaving me to explore the garden guided by descriptive signage placed throughout the six acres.

In the production garden,  vegetables and herbs shared space with beds devoted to cut flowers destined for the house. Signage let me know that cherry, plum and pear trees trained along the brick walls were placed to take advantage of the bricks’ heat-retaining ability, hastening ripening. 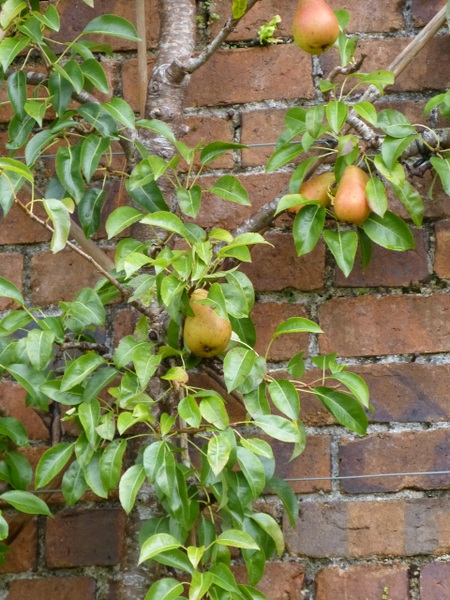 Two of the original 21 glasshouses were rebuilt. One, devoted to examples of the exotics enjoyed by the Mitchell family and their guests, is open to visitors. The other, where propagation of plant material takes place, allows only a tantalizing peek through the door.

Wisps of chimney smoke from matching, tidy cottages on the far side of the garden beckoned – the head gardeners cottage and the workmen’s “brothy” (a shelter for garden workers) –   with interiors returned to Victorian days. 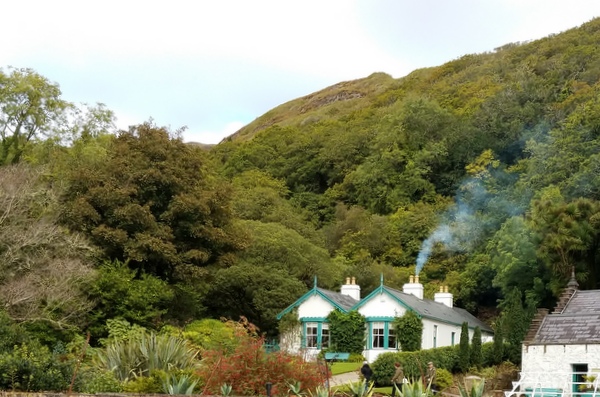 The head gardener’s cottage,  interior restored to Victorian days, is tucked into a far corner of the garden.

Close by, a brick shed displayed garden tools of the era. Next to it, another shed told the story of the garden’s restoration. 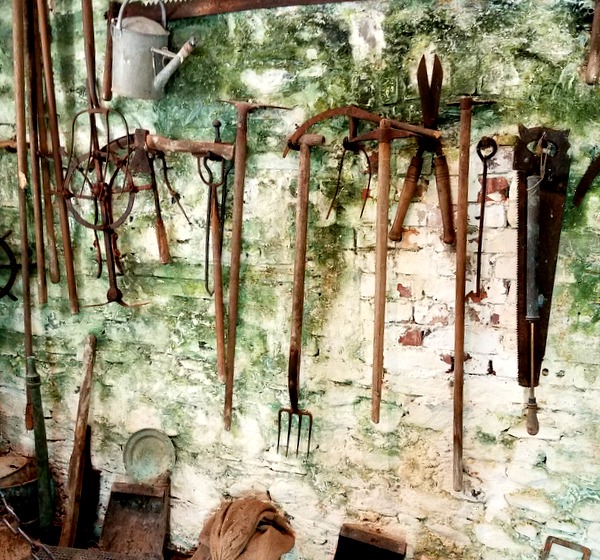 Victorian-era garden implements were arranged in the Tool Shed as once they were.

Walking an option to shuttle …

While a shuttle is available to carry visitors back to the tea room and visitors center,  I chose to take the woodland path, shuffling through early autumn-fallen leaves. 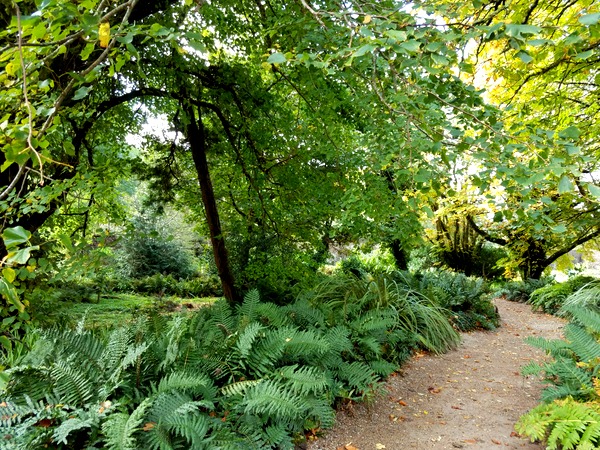 Miles of  paths wander through the estate’s extensive woodland acreage.

“Kylemore” originates from the old Irish words coill mor,  meaning Big Wood. In 1995, Kylemore Abbey undertook returning the estate to what it was once. Ten thousand indigenous oak and ash were planted, with more added each year in an a program that remains ongoing.

The day was fast departing. Alas, a visit to the Abbey itself would have to remain in my “if time allows” mental file.

Kylemore Abbey is open daily, with the exception of December 24, 25, and 26. Opening and closing times vary seasonally, see www.kylemoreabbey.com for variations and entry prices.  A ticket includes a visit to restored abbey rooms and history talks, shuttle bus rides to and from the walled garden, miles of woodland and lake-shore walks, a guide booklet and map.