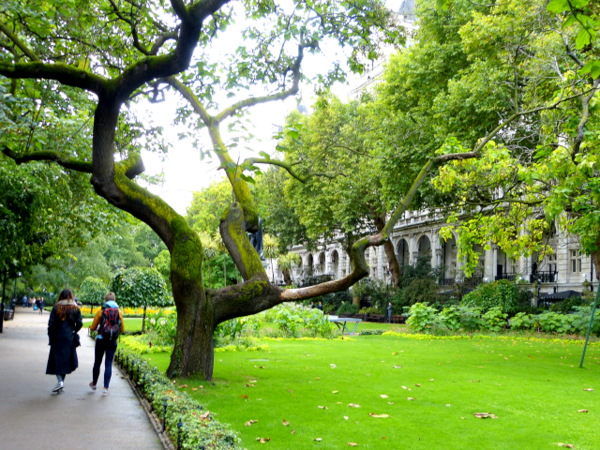 Time out. A series of three gardens – expanses of immaculately kept lawns and flower beds, ponds, shrubs and towering trees, wandering paths with comfortable benches along the way – offers a respite of serenity within minutes of many of the city’s major attractions.  The Victoria Embankment Gardens. 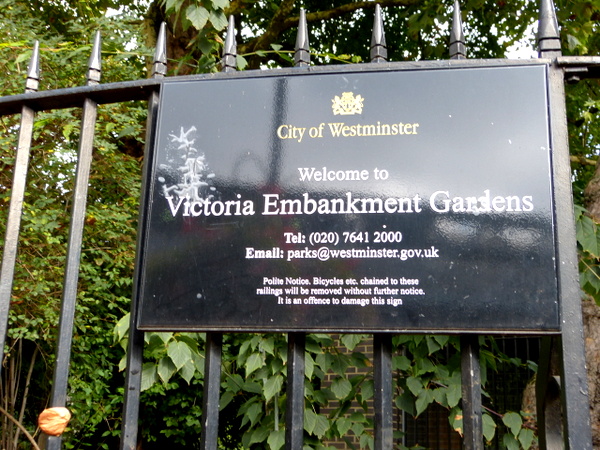 Sign at a  gardens’ entrances welcomes visitors, of which most are locals with few tourists. .

You’ll see few tourists, as did I this September day, in these three mid-19th century gardens curving around a loop on the north side of the Thames. Londoners are the gardens’ patrons, relaxing on a bench while reading the daily paper, walking arm-in arm down a shady path, enjoying a take-out lunch on sunny days…

Christopher Wren, considered among the most highly acclaimed English architects in history, was the first to suggest the Thames’ embankment following the Great Fire in 1662. While he did undertake responsibility  for rebuilding 52 of the City of London’s churches, most notably St. Paul’s Cathedral, his embankment proposal didn’t see the light of day for 208 years.

Under the supervisory genius of the great engineer Joseph Bazaette , the primary purpose of the embankment project was not to provide a green place of respite from bustling city life. The smelly “miasma” flowing directly into the Thames had become intolerable; the embankment would house a sewer system designed to protect London from its own waste,

Alexander McKenzie, landscape architect for the Bureau of Public works, was charged with prettying-up the site, a stretch of narrow land with about 20 acres earmarked for gardens. In doing so he was asked to avoid “expensive gardening” and to incorporate trees and shrubs likely to withstand the “injurious effect of the smoke laden atmosphere” and the Victorian’s penchant for pilferage. What plants might be less likely to disappear overnight?

In 1870, the Prince of Wales officially opened the embankment, with McKenzie’s three gardens containing much of the same mixture of deciduous trees, shrubs, bulbs and summer bedding plants that continue to beautify the river bank to this day. 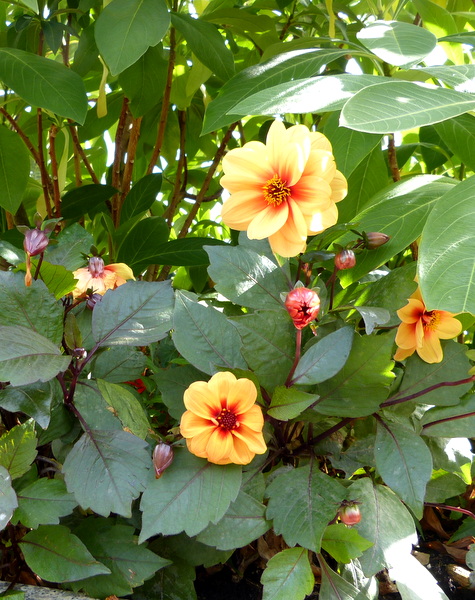 The same early mixture of trees, shrubs and flowers continue to this day.

A quick pop into any one of the gardens provides a restoring break. Better yet, is to set aside a leisurely hour and stroll through all three.

I began at the Embankment Tube station, which exits directly past an abundant flower stall into the northernmost garden. From there I walked farther north through the garden as I wanted to see the Sir Arthur Sullivan statue, one of dozens of memorial statues situated throughout the three gardens. London’s statue aficionados consider it the sexiest in London. 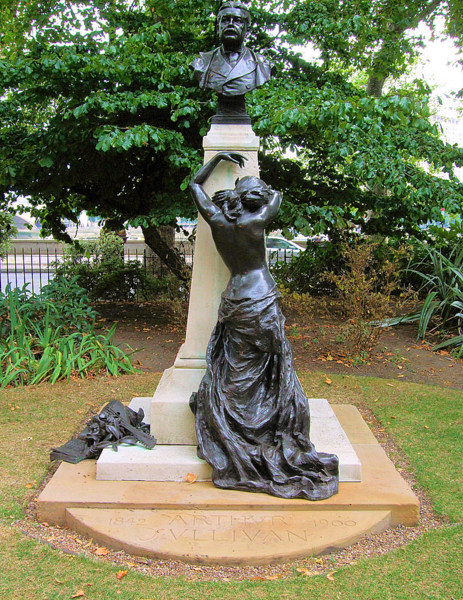 Memorial to Sir Arthur Sullivan is considered by afficionados  to be the sexiest statue in London.

A crying woman, so distraught that she’s not noticed that most of her clothes have fallen off, leans against a pedestal supporting the bust of Sullivan. At her feet, a guitar, score, and mask of Pan indicate that this is not just an Art Nouveau flight of floozy but represents the muse of music mourning the musical world’s loss.

The statue is well placed, looking toward the Savoy Hotel.  Opened in 1889, and today remaining arguably London’s most famous hotel,  the Savoy was built by Richard D’Oyly Carte with profits from his wildly popular Gilbert and Sullivan productions. His Savoy Theater, where the comic operas premiered, was located next door.

I turned around and backtracked south. Steps away from the Embankment Tube station the Embankment Gardens Café offered a simple menu of snacks and drinks to be enjoyed at tables under the trees or inside. 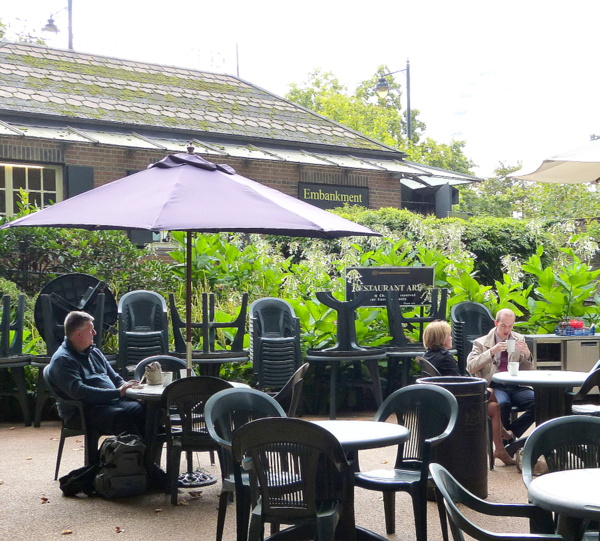 Café near the entrance to the Embankment Tube offers a simple menu and grand garden views.

From there, I walked under the Hungerford bridge and crossed Northumberland Avenue at the stop light to enter the lower Embankment Gardens. Across a sweep of manicured lawns, the grand 1906-built Old War Office is the garden’s centerpiece.

At the bottom of the garden, I exited to cross Horse Guards Avenue. The next section of the embankment was a major thoroughfare. Making up for the loss of tranquil garden strolling, I crossed over to the river side of the road for a close up view, as I walked along, of the amazing variety of traffic vessels that ply the Thames – military vessels, tugs and work boats, private yachts, cruise ships, barges.

Just ahead, Big Ben clock tower loomed over the Houses of Parliament, with the Westminster Tube station on the street’s northwest corner.

People watching in the Tower Garden …

The Victoria Tower Gardens remained yet to explore. Crossing Bridge Street, I walked past Parliament Square and Westminster Hall following Abingdon Street, which opens into the garden.

On sunny days, such as mine, the Victoria Tower Gardens attracts the embankment’s bigger crowds, making for great people-watching. 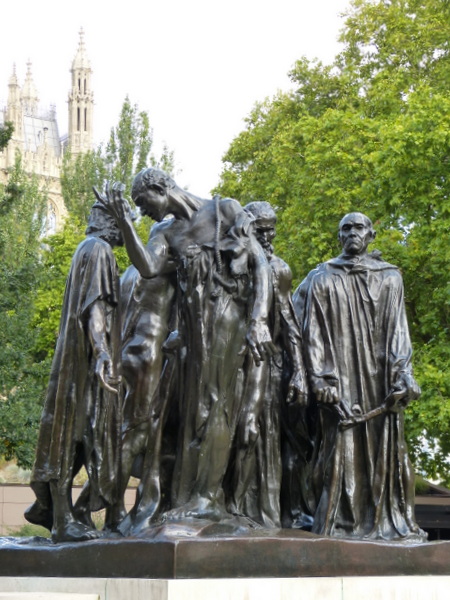 Rodin’s sculpture – Parliament in background – one of dozens of noteworthy y works of art in the gardens.

Rodin’s sculpture “The Burghers of Calais,” commemorating an episode during the Hundred Years’ War between England and France, dominates the upper end of the garden. A charming children’s playground featuring equipment constructed from natural materials occupies the garden’s lower end.

Cross the bridge to the Garden Museum …

If you have time, take the stairs and cross Lambeth Bridge to visit the Garden Museum in the deconsecrated church of St Mary-at-Lambeth just across the Thames. In addition to charming exhibits, the museum offers a light and airy café and, if it is open during your visit, a winding staircase climb to a wondrous circular view of London from atop the church tower.

The gardens are open daily at 7:30 am with seasonal closing hours at dusk.