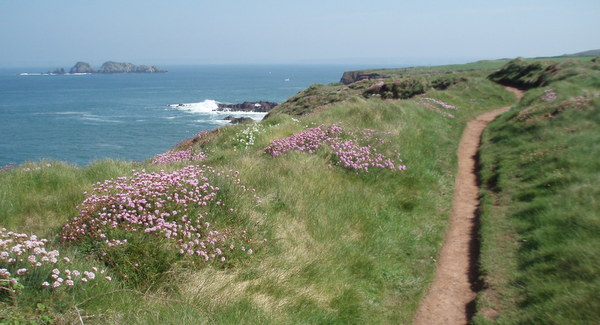 WALES St. David’s Head – There are two traveler’s “must-dos” when visiting southwestern Wale’s St. David’s Head: a tour through the magnificent cathedral from which the peninsula gets its name, and walking a stretch of the pathway that echoes Pembrokshire’s  dazzlingly gorgeous coastline. To those, I’d added a third –  a visit to Sue Clark’s Crystal Garden. 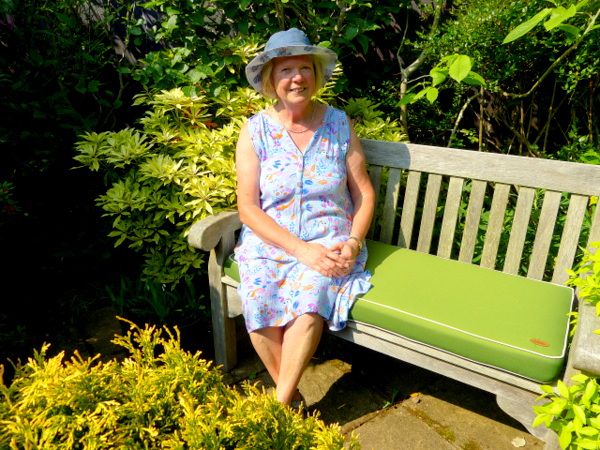 Sue Clark awaits our visit on a bench overlooking her Crystal Garden.

“What a glorious time of year for the garden!” Sue Clark exclaimed, as she led the way to a picnic table centering a sunny, grassy area.

Beds of vibrant red poppies certainly caught my eye, as had the shapes and shades of diverse shrubbery – some in full springtime flower – punctuated by stands of maritime pine that edged the area where we were seated. 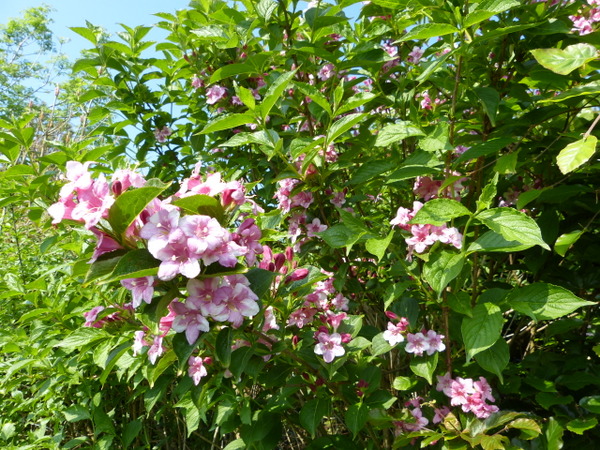 But that extensive and dense bramble of berry bushes?  “Purposefully kept, as habitat,” Sue reassured, “I get the berries on the outside, the birds can have the rest. They nest in the bramble, fledglings emerge, birdsong fills the garden.

“Everything planted was carefully chosen to shield the garden from the winds and salt air blowing in from the sea,” she continued. “While winters here are relatively mild, we seldom get frosts, wind-chill can be significant.” 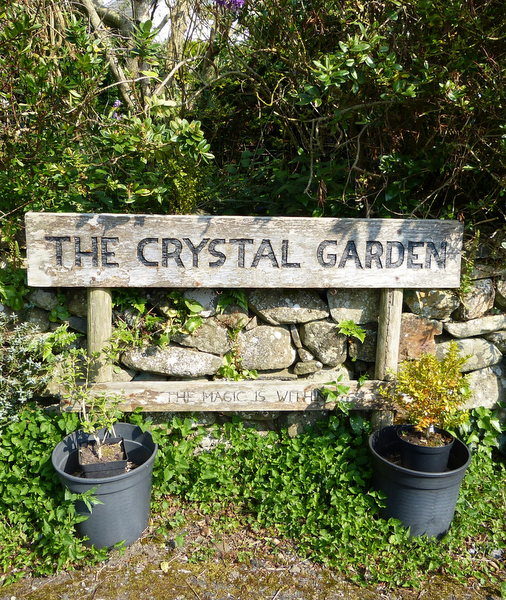 The garden’s entrance sign -“The Magic is Within” – welcomes visitors.

Ocean winds and salt air were free to come blowing in when the Clarks, Sue and her husband Paul, purchased the near-acre site in 1995. Once the playground of the wee village of Carnhedryn’s primary school, the abandoned property offered a clean slate. 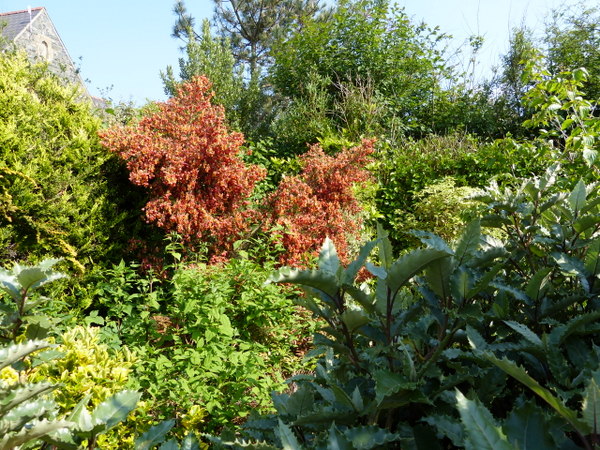 Plants chosen to withstand salt air and coastal winds edge the Outer Garden. A glimpse of Carnhedryn’s abandoned primary school, is in the far left background.

For some time the Clarks, who lived in Cheshire, had enjoyed coming to Pembrokeshire on holidays.  Now it would become their home.

While the Clarks had always tended a home garden, they began to develop their interest in earnest. “We read about gardens, visited gardens, carried a Royal Horticultural source book with us wherever we went,” Sue said. They potted up plants and propagated others from seed and slips. “If a plant caught our eye, we’d ask, ‘Might we have a small piece of that?’ Take it home and get it going.”

Some 1000 varieties are now represented in the Crystal Garden, a garden of two distinct parts. From where we were seated, in what Sue referred to as the Outer Garden, it was apparent that the area around us, although lushly edged, made but a dent in the 1000. Was there another?

“Come and see,” Sue said, leading the way toward the house. 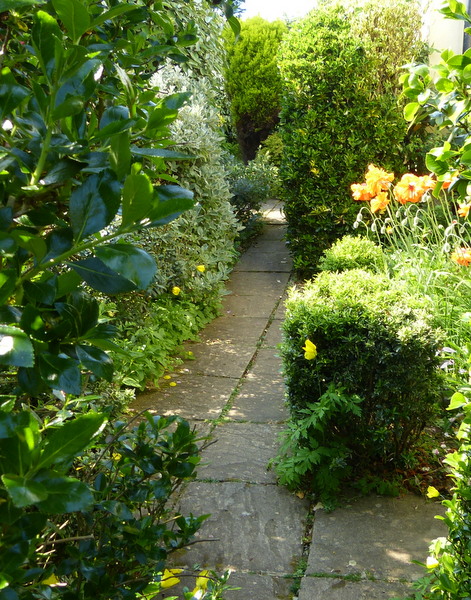 The Inner Garden showcases most of the garden’s 1000 plant varieties.

A treasure trove of small, gardened “rooms,” which Sue and Paul christened the Inner Garden, surrounded the house and beyond, connected by narrow, plant-bordered paths. The rooms, Sue explained, are color coordinated. A “cool room” featured the blues and purples of ceanothus, columbine, cranesbill geraniums, and more. A “warm room” bloomed in shades of yellow, rose and orange. The largest featured foliage in shades of green ranging from near yellow to near black. 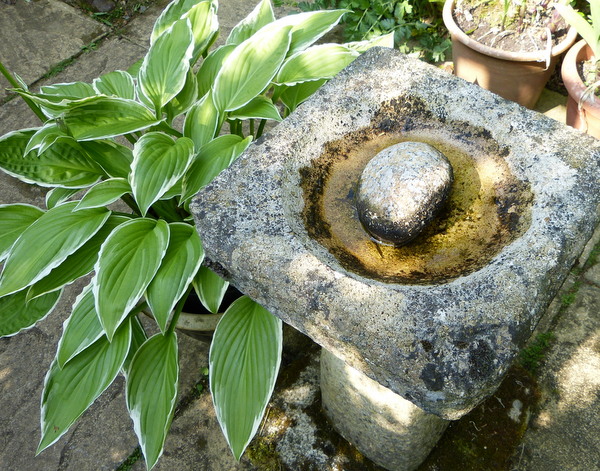 Small surprises await as one strolls the narrow paths of the Inner Garden.

“We planned both the Inner and Outer Gardens so that no matter when one visits there would be something to see,” Sue said, adding that with Paul’s death in 2013 she has taken over the gardens’ complete care.  She also is on hand to welcome visitors to the Crystal Garden, which is listed as a National Garden Schemes property. 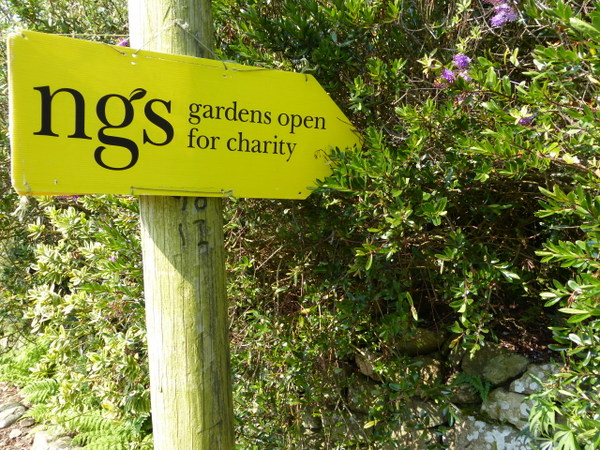 A National Garden Schemes sign points the way to the Crystal Garden’s entrance.

One last question – why is it named the Crystal Garden?

“Slow and organized is how crystals grow,” she said, “True of the Crystal Garden, too.”

And the strange structure looming through the shrubs and trees in the Outer Garden?  “Scaffolding from the building of our house, pieced together by Paul so that the Crystal Garden might have its own Crystal Palace, a folly of London’s grand cast-iron and glass structure that housed the Great Exhibition of 1851.” 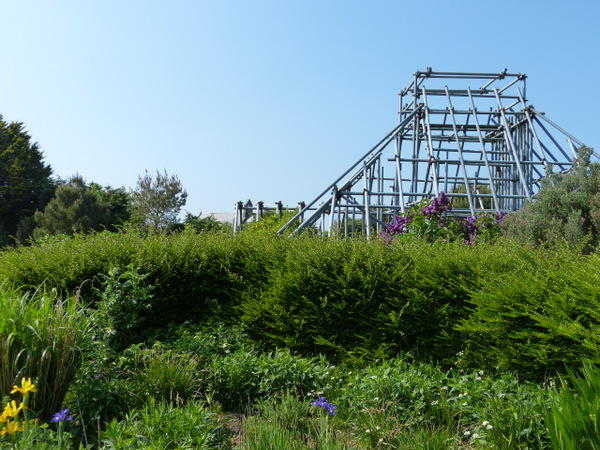 The Crystal Garden’s very own Crystal Palace looms over the Outer Garden.

With that, I bid goodbye to Pembrokeshire’s very personal, very different, and very special garden.

Days and opening hours for drop-in visits to the Crystal Garden (Golwg yr Ynys, Carnhedryn, St. David’s, Pembrokeshire SA62 6XT, U.K) can be found on the garden’s website, (www.TheCrystalGarden.org).  Visitors are also welcome by prior arrangement, April to September. (Call 01437 721 082; or [email protected] email address.) The Crystal Garden is located just off A487, 4 miles east of St. David’s on the way to Fishguard.  A. A yellow National Garden Scheme sign marks the garden’s location.