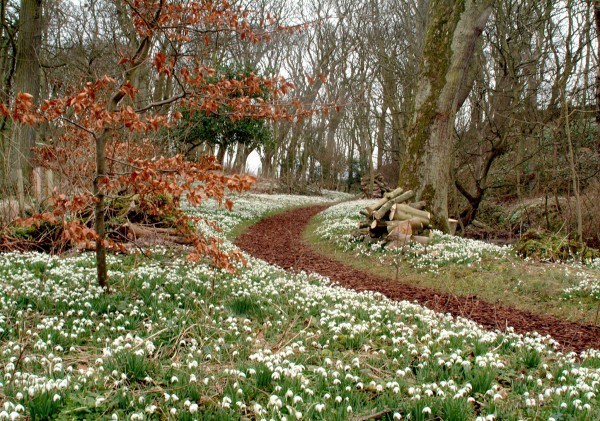 SCOTLAND St. Andrews – “Take the path to the sea,” the man in the blue, wooly sweater advised. “It’s quite a lovely walk.”  “Are you the head gardener?” I asked.  “No,” he nodded with a smile, “I’m Peter Erskine.”

Oh!  As it dawned on me that the blue, wooly, sweater wearer was Sir Peter Erskine, heir to this estate to which I’d come to wander its snowdrop-drifted  acres.  Cambo Estate, one of Scotland’s grandest. 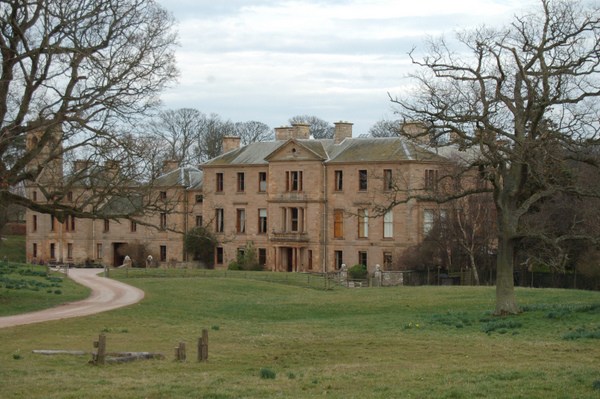 Cambo, largely accredited for initiating the popularity of Scotland’s annual Snowdrop Festival, is considered one of Scotland’s grandest estates.

In February and March hundreds, thousands, of visitors pour through Cambo’s  gates to “ooh” and “aah” over sweeping drifts of tiny, white, ballerina skirts nodding beneath winter-bare beech, oak and sycamore woodlands. The Scottish Snowdrop Festival and Trail beckons them, an annual celebration that draws “galanthophiles,” snowdrop enthusiasts, from the world over.

During the festival, dozens of Scotland’s estates and gardens throw open their gates in celebration of the snowdrop. Of them, Cambo, on the edge of the North Sea and but seven miles south of golf-famous  St. Andrews, promises one of the most extravagant and diverse displays. 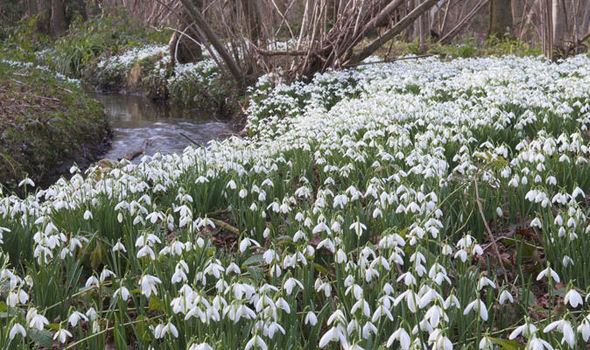 Snowdrops, Galanthus (from the Greek, gala meaning milk, anthos, flower), have claimed the hearts of the British for centuries, signaling as they pierce through the cold earth that the long, gray days of winter will  depart and that spring is just around the corner.  So prolific are Britain’s snowdrops, popping up everywhere from cemeteries to ditches to grand estates, that it is easy to assume that they are native.

Not so, although how and when they arrived is unknown.  One belief, since they are frequently found in the gardens of old monasteries, is that monks arriving from Italy in the 15th century brought bulbs with them. Lending credence to that is  Britain’s first garden reference to “snowbells” appears in the 1597-published General Historie of Plants by English herbalist John Gerard.

The why, how, and when of snowdrops introduction to Britain remains a mystery.

No records exist at Cambo, where the Erskine family has lived since the 17th century, as to when the first snowdrops were spotted on the estate.  Peter Erskine, however, credits his grandmother, Magdalene, with encouraging their spread throughout its 70-acres of woodlands. An avid gardener, she “dragooned,” as Peter tells it, her eight children into helping her dig, divide and replant dormant bulbs.

It’s  the current Lady Erskine, however, Peter’s wife Catherine, who has put Cambo on the snowdrop map as a “must see” galanthophile destination.

Lady Erskine put Cambo on the “must see” snowdrop map.

Catherine’s involvement began when Peter’s parents turned the estate over to the couple. A two-and-a-half acre walled garden, gone into total disrepair, captured her attention. “I wanted to rescue the garden,” she said, “and I needed money to buy plants.”

To do so, she sold dormant  snowdrop bulbs. “Until I read that it was better to plant them  straight after flowering,” she told me. “With that, I began offering snowdrops ‘in the green’.”

Enlisting the Erskine youngsters as a work force, bulbs were dug and prepared for sale in February and March. “Unlike Peter’s grandmother, I paid the children!” Catherine  added with a laugh.

The fame of Cambo snowdrops spread, along with Catherine’s growing awareness of the often minute differences between varieties. The world’s galanthophiles have identified 19 species, a handful of natural hybrids, and some 700 varieties.

Catherine has assembled a collection of more than 200  varieties, a collection that was officially recognized as the  Lady Erskine Collection in 2007 by the National Council for the Conservation of Plants and Gardens. 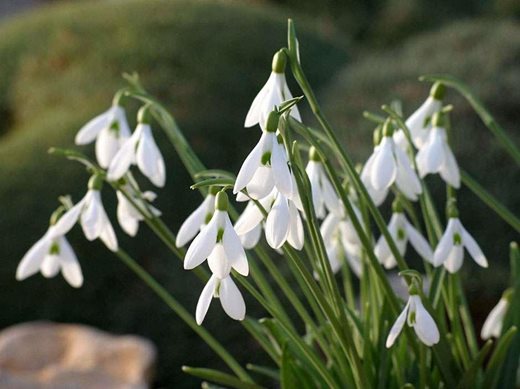 Painstakingly labeled and in raised beds so as to readily display the snowdrops’  delightful variations in shapes and markings, the collection is planted close to the house . “I like to keep an eye on them,” she said.

In recent years, demand for specialist snowdrop bulbs has skyrocketed. While not approaching the binge of “tulipmania” that engulfed the Dutch in the 1630s, when tulip bulb prices rose out of all proportion to economic reality, a single specialist snowdrop bulb recently sold at auction last year in England for the equivalent of  a bit more than $200.

What began at Cambo as a way to refurbish the walled garden  has turned into a profitable enterprise with the preparation and dispatching of “green” snowdrops.  No longer are  Catherine and the kids the sole workers; six employees and a small army of volunteers give her a hand. 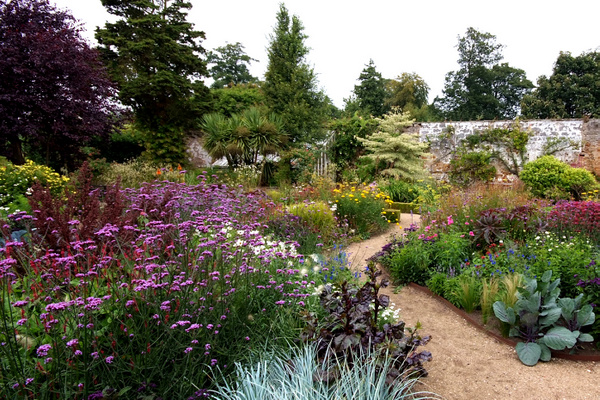 Snowdrops as a cottage industry – if that it could be called, given the size of Cambo’s manor house – metamorphosed into a full-scale business and tourist attraction.  From January into March, Cambro promotes itself as a one-stop Snowdrop Fair. Plants – snowdrops, along with other early-season blooming plants like aconites, helleborus, cyclamen, crocus  – are potted up for sale; a gift shop displays local potters’ snowdrop-inspired ceramic wares; art work on the theme of snowdrops provides an art show; a tea room warms snowdrop walkers. Snowdrop talks and guided walks complete the program.

Other woodland owners jumped on Cambo’s snowdrop bandwagon with their versions of a fair. “As interest increased throughout Scotland,” Catherine said, “it seemed sensible to bring all the owners of snowdrop woods and gardens together under one umbrella and promote a Snowdrop Festival and Trail throughout Scotland.”

The Snowdrop Festival is now an annual event.

The National Trust for Scotland and Scotland’s Gardens’ Scheme agreed, along with Visit Scotland, the Scottish national tourist board. In 2006, the first nationwide festival was held, enticing some 7500 visitors to tiptoe through the country’s snowdrops.  A grateful Visit Scotland recognized Sir Peter and Lady Erskine with a Scottish Thistle Award for excellence and innovation.

Those meeting Lady Erskine as she goes about her snowdrop tasks dressed in her everyday gear of work boots, scarf wound around her neck and sturdy gardener’s jacket might be excused for mistaking her for Cambo’s head gardener.  If in doubt, just ask the man in the blue, woolly sweater.