CZECH REPUBLIC  Lednice – Two magnificent chateaux bookend what is known today as the Lednice-Valtice Cultural Landscape in the South Moravian region of the Czech Republic.

From 1249 until events surrounding World War II resulted in its confiscation, the Cultural Landscape’s 100-plus square miles belonged to Liechtenstein, the tiny, 62-square-mile principality sandwiched between Austria and Switzerland.

Between the 17th and 20th centuries, the Dukes of Liechtenstein set about transforming the land between their two chateaux into a traditional, English-style park, with sweeps of gently rolling lawns, groves of trees and small lakes,  punctuated along the way with artful interpretations of classical temples. All were tied together via a chateau-to-chateau, tree-lined  allée. Today, the entire complex is owned by the Czech Republic,  and a large part of it is a UNESCO designated site.

The landscape between the two chateaux is punctuated with ponds and classical follies.

From Lednice to Valtice …

Both of the chateaux are worth a visit, the Lednice chateau for its attached, 1845-completed, 302-foot greenhouse.

In its glass-enclosed interior, some 250 tropical plants flourish, progeny of seeds brought back by plant-hunting horticulturists deployed with a special requirement in mind: No matter what time of year, a representative number of plants in the greenhouse must be in flower, as was so on my May visit. 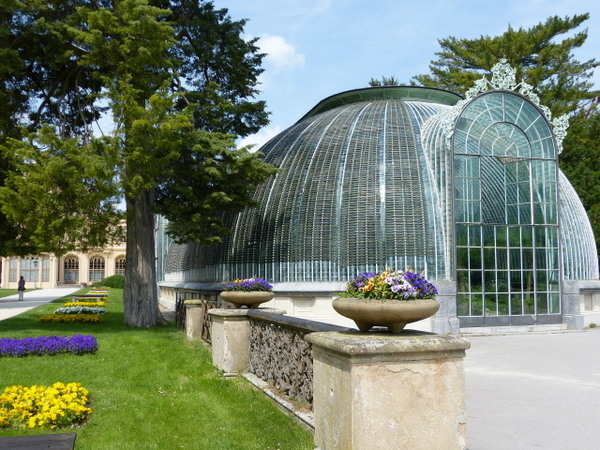 A massive, 19th century greenhouse containing hundreds of exotic plants is attached to the Lednice chateau.

The over-the-top greenhouse and the tranquil, surrounding landscape between the chateaux were an expected delight.

Not expected was a garden at Valtice, the lesser grand of the two chateaux that was nevertheless favored by the Liechtensteiners as a  home away from home.

At Valtice, I peered over the chateau’s wall to see what might be beyond. Not beyond, but directly below was a charmer of a garden featuring an orderly array of boxed beds. Walking down to see what they might contain, I entered the Lu & Tiree Chmelar Herb Garden.

Valtice chateau’s garden of boxed beds planted with beneficial herbs is reminiscent of a 17th century monastery garden once tended in Valtice.

Dozens of different herbs, near 300, were represented.  For example, under the medicinal heading, I wandered through boxes devoted to skin and wound healing, with 10 different species planted. Ailments of the digestive system offered 23, as did beds containing herbs used in aromatherapy. 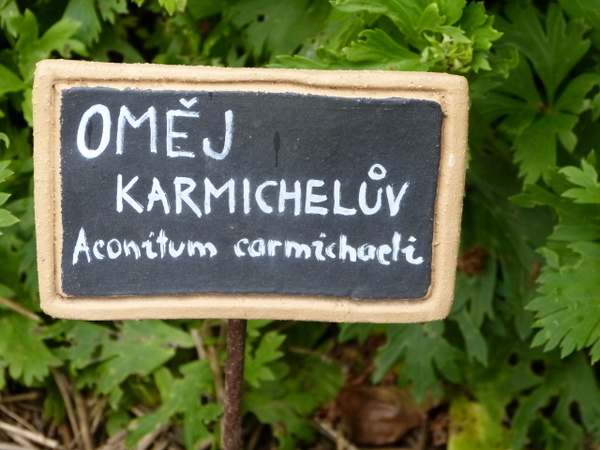 In centuries past, such plantings were essential to monastery life. In the 17th century, an herb garden was tended in Valtice by the Order of Merciful Brothers.

Today’s garden at Valtice was the brainstorm of the now deceased Tiree Chmelar. Tiree and her Czech-born husband, Lubomir, in retirement divided their time between residences in New York and South Moravia. In 1990, the two spearheaded the Prague-Vienna Greenways – a 250-mile hiking and biking trail through some of Europe’s most picturesque countryside – and opened an office in Valtice.

A goal of the Greenways project was sustainable tourism. With that successfully underway, Tiree turned her attention to enticing more tourists to visit the lesser grand of the Cultural Landscape bookends.

A garden came to mind, one with historical roots yet enjoying growing relevance today – an herb garden.

In 2005, a competition for the garden’s design was held at Mendel University’s Horticultural School in nearby Brno. Three winners were chosen, and their ideas combined into a single entity. As the garden progressed, students were involved in the construction.

More than a dozen years later, I walked through a mature garden edged in a fruit tree orchard and eye-catching flower beds. Children played in a sandbox with watering cans placed nearby in case one wished to give a plant a drink of water or create a sandcastle. 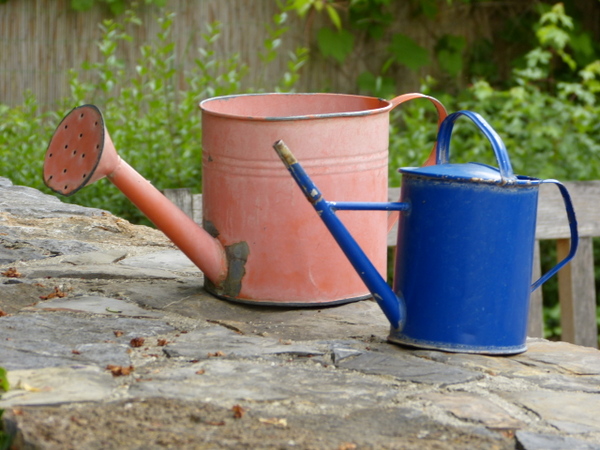 Watering cans stand at the ready for children to give plants a drink.

Drop in on the herb garden…

On the first Saturday of every month, courses are given on the use of herbs in everyday life, recipes included. Private guided tours can be arranged. The garden shop displays an irresistible array of plants, toys with garden themes, books, herbal products (from vinegars to facial creams) and more. 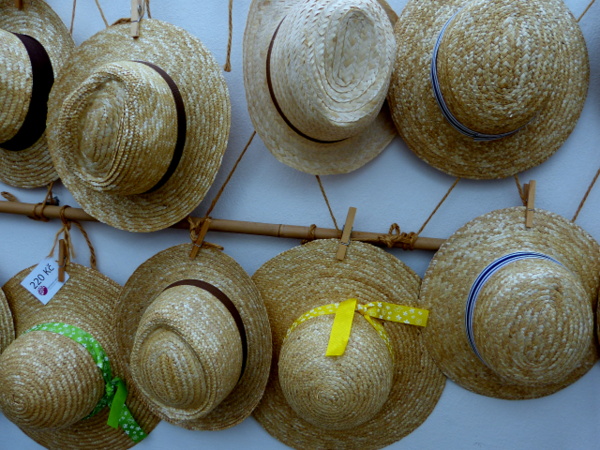 A display of straw gardening hats take their place among the garden shop’s eclectic array of garden-themed items.

Tiree Chmelar did not live to see the opening of the garden dedicated to her memory. In 2016, the garden’s name was officially changed to include that of both Chmelars – the Lu & Tiree Chmelar Herb Garden.

The garden is open mid-May through October with seasonally changing hours that generally begin 10 am to 6 pm Saturday and Sunday, Monday through Friday 2pm to 6pm. Contact: https://bylinkovazahradavaltice.cz/ (can be translated).