SCOTLAND Edinburgh – Hands down, Edinburgh’s Royal Mile wins as the city’s most visitor-trod street. And well it should be. To walk its length is to follow in the footsteps – most likely the carriage rumblings – of the kings and queens who for five centuries made the journey between the formidable castle-fortress that dominates the Old Town skyline to Holyrood Palace.

Since the 16th century, Holyrood has served as the Scots official royal residence. Today, Queen Elizabeth officially spends one summer week each year at the foot of the Royal Mile overseeing engagements and ceremonies.

With a guidebook in hand, it’s possible to identify vestiges of history from the 11th century onward, among them, the 1477-built Moubray House, recognized as one of the city’s oldest buildings. At the beginning of the 18th century, Daniel Defoe, known best as author of “‘Robinson Crusoe,” lived at Moubray House while editing the Edinburgh Courant. 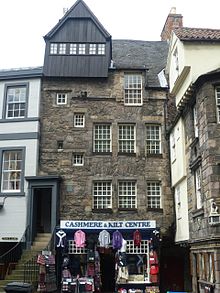 A cashmere and kilt shop occupies the bottom floor of Moubray House,  one of the city’s oldest buildings.

Defoe described High Street, as it was then and still locally known, as “the largest, longest, finest street not only in Britain but in the world.”

As I made my way down a noisy and people-crowded Royal Mile,  I wondered what Defoe would have to say about the influx of tourist-tacky that has elbowed its way into his “finest” – bagpiping buskers, shops touting touristy images of Scotland, tins of shortbread, racks of kilts, opportunities to buy an  “authentic” family crest. Well, there were those piles of cashmere sweaters and scarves that caught my eye and pocketbook. 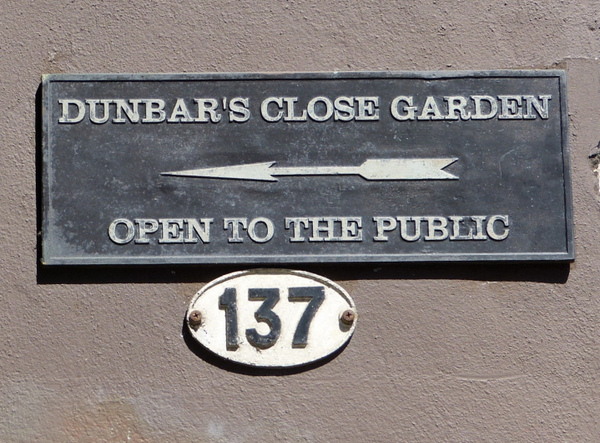 Approaching the Holyrood end of the street, I spotted a sign on a wall of an unassuming passageway: “Dunbar’s Close Garden,” with an arrow pointing the way. Following the arrow’s direction through the passageway’s dark and cobbled interior, I stepped into a sunny 17th century garden of rustling leaves and bird song.

Dunbar’s Close is one of some 80 medieval-era, narrow lanes, “closes,” that open off the Mile. The close I entered was named for one David Dunbar, a 17th century Edinburgh writer who owned property near the passageway’s entrance, next to Canongate Kirk.

Unlike the tenement-crowded upper end of High Street, the Canongate lower area boasted fine houses set in elegant gardens. Dunbar’s Close Garden, sharing a stone wall on its west side with the Kirk (church) offered a gracious example of those days. 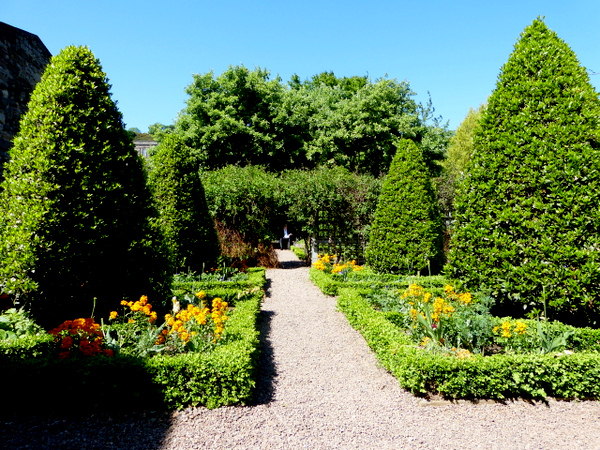 Interiors of parterres feature plant species of the time, lavender, iris and roses, salvias and peonies, beds of herbs.

For a happy, quiet hour I explored the garden’s series of symmetrical parterres, a favored design element of the time, each edged with a neatly clipped hedge and surrounded by a gravel path. Old stone walls were softened with shrubbery (on one side I identified a stand of ancient yew) with recesses cut in for small flower beds and an occasional stone bench. 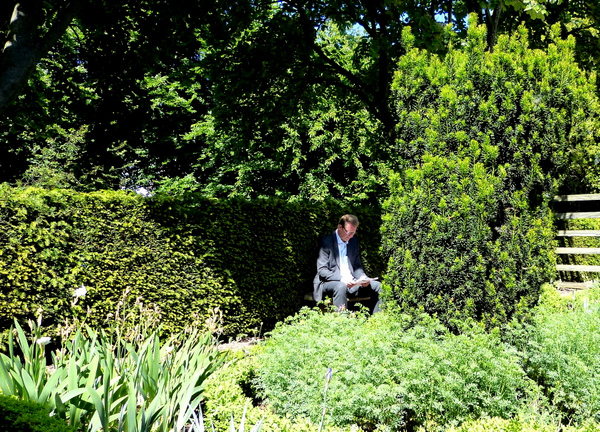 A shrub-sheltered niche provides a quiet space to read the daily news.

As I set off, I thought I was alone in the garden, until coming across a man sitting on one of those benches engrossed in his newspaper. Later on a young couple wandered in to sit in another recess engrossed in each other. Otherwise the garden was mine alone to enjoy.

Interiors of the parterres featured plant species of the time, lavender, iris and roses, salvias and peonies, beds of herbs. Mature trees, including fig and sycamore, provided areas of welcome shade.  Midway through the garden a woven wood fence supporting an apple espalier divided the garden’s three-quarter acre rather narrow length. 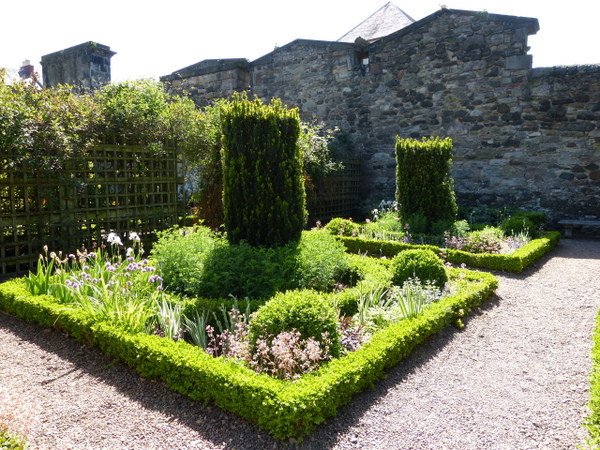 The garden’s architect looked to representations of a typical mid-17th century garden for landscaping inspiration.

Open to the public…

It would be too much to expect that David Dunbar’s garden remained intact and cared for through the centuries. In 1977, the Mushroom Trust, a charity with its main focus the protection and enhancement of green spaces in and around Scotland, took on the abandoned and sadly overgrown site.

The trust commissioned landscape architect Seamus Filor with instructions to not attempt a recreation of the garden but instead design a plan true to its 17th century roots. To do so, Filor took inspiration from old maps and a recent creation of a mid-17th century garden at the Royal Botanic Gardens at Kew.

In 1978, the Trust turned over Dunbar Close Garden to the City of Edinburgh Council. A sign at the close’s entrance was installed and the public invited to step through and enjoy a serene respite. As did I.

Dunbar’s Close Garden located at 137 Canongate, High Street opens to the public daily at 7 a.m. with closing times adjusted to the seasons. 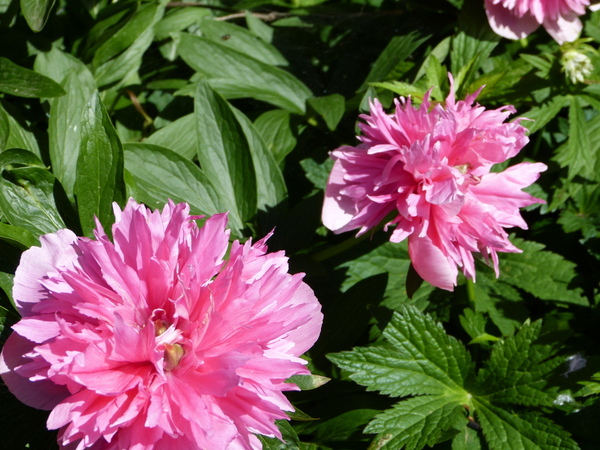