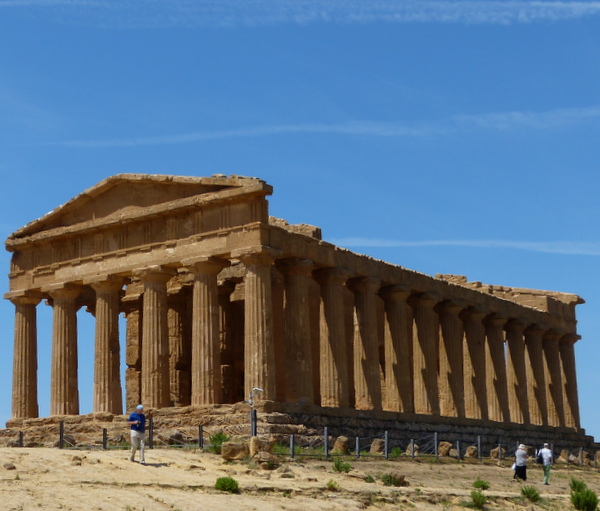 Valley of the Temples collection of  remarkable ruins dating between 510 and 430 B.C.

ITALY Sicily – I could not help but wonder as we wandered among Magna Graecia structures dedicated to the gods why this UNESCO archaeological site is known as the Valley of the Temples.

Easily understood was the “temple” part, as we were walking through the remarkable ruins of seven built between 510 and 430 B.C. All, however, are located on a high ridge just outside the Sicilian town of Agrigento, as Akragas is now known. Perhaps “Ridge of the Temples” didn’t ring quite right. 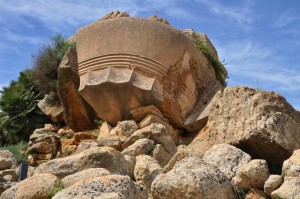 Among the stately edifices, some remarkably intact, the Temple of Olympian Zeus lies in a magnificent tumble.

It was intended to commemorate the 480 BC battle of Himera, in which the  cities of Akragas and Syracuse defeated the Carthaginians. Defeated soldiers captured after the battle provided slave labor for what  would have been the  largest Doric temple ever built.

For whatever reason, it was never completed. Through the centuries, time and events took their toll, leaving the Temple of Olympian Zeus in picturesque rubble.

Carthaginian slave-labour hands,  however, did complete the digging of a  deep lake fed by an intricate system of aqueducts and directed, clay-brick channels. Although its primary purposes were to be a water reservoir and a source of farmed freshwater fish, with its flora-reflected waters and swans floating by, the lake provided a pleasurable spot to visit.

Fast forward 15 centuries to the Arab arrival in Sicily. Agrigento was no longer the resplendent city of Magna Graecia temples to mythical gods . With the city now inhabited by Greek Orthodox Christians, the temples’ origin and meaning had long been forgotten. Sheep grazed among the structures.

Their agriculture was among the many lasting gifts the Arabs brought with them. In a far corner of the ridge, they came upon the remains of the lake, now obliterated with overgrowth, and saw it as a garden. They planted citrus, vegetables, fruit and nut trees, bananas, sugar cane and date palms brought from their native land. 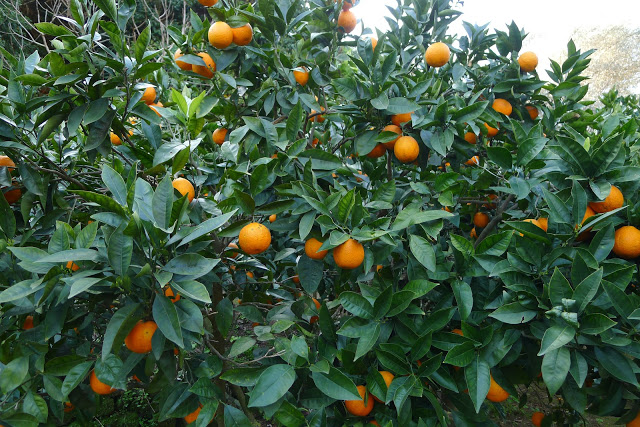 Citrus, introduced in Sicily by the Arabs and prized for their beauty and fragrance as well as fruit, remains  abundantly planted in the garden.

With the Arab’s departure 220 years later, in the 16th century the church took over Kolymbetra’s maintenance. The garden became a major tourist stop for Grand Tour travelers until, in the 1980s, the water supply failed. Abandoned once again, the garden descended into a jungle of brambles.

In 1999, the National Trust of Italy stepped in, removing overgrowth and restoring terraces, ancient aqueducts and irrigation systems. What could be rejuvenated in the garden was pruned and inventoried; with new trees and plants put in place according to ancient maps. In 2001, the historic, five-hectares garden re-opened to the public.

On the ridge, vendors were enjoying a lively business selling colorful paper parasols on the hot and dusty June  day of my Overseas Adventure Travel (OAT)  visit to the temples. With three temples yet to go, I slipped away to find Kolymbetra. 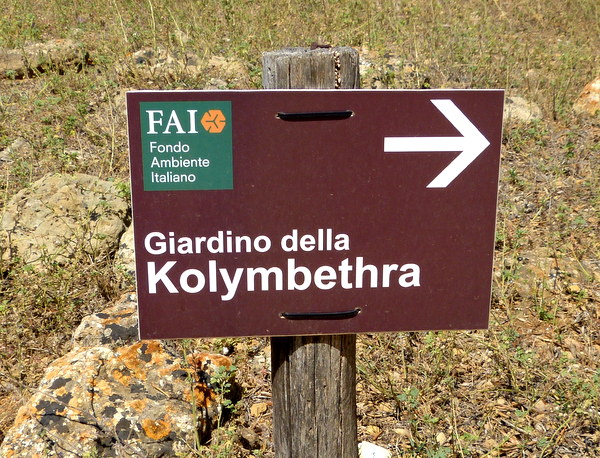 A sign near the Temple of Dioscuri pointed the way to a flight of rustic stone and earth steps that delivered me into what was once the bottom of the lake, a lush oasis from the sun-baked, ancient ruins above.

A detailed plan of the garden was the first of a series of excellent signs explaining, in English and Italian, the history and significance of the garden and the plants.

From them, I learned that citrus orchards are called “gardens,” emphasizing their beauty and fragrance as well as usefulness; that the vegetable garden is planted with varieties that in years past were those transported to market by mule, including courgettes, aubergines, tomatoes, and peppers; that the olive tree with the massive twisted trunk is estimated to be 800 years old, and that the sugar cane thickets growing along the stream that crosses the garden were in place in 1225. 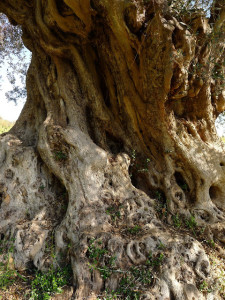 The gnarled trunk of an ancient olive, considered to be 800 years old.

Ancient systems of irrigation, including the tunnel aqueduct excavated by Carthaginian slaves along with  gravity-flow, clay-tiled channels, continue to deliver water throughout Kolymbetra today.

The dry and craggy, ravine-like edges of the garden were densely covered in Mediterranean maquis –   tough, native, scrub land, shrubs and trees. Occasionally a tree had found foothold in the maquis. I spotted fig and olive, and what I learned later was a Mediterranean fan palm, the only palm that grows wild in the Medterranean basin. 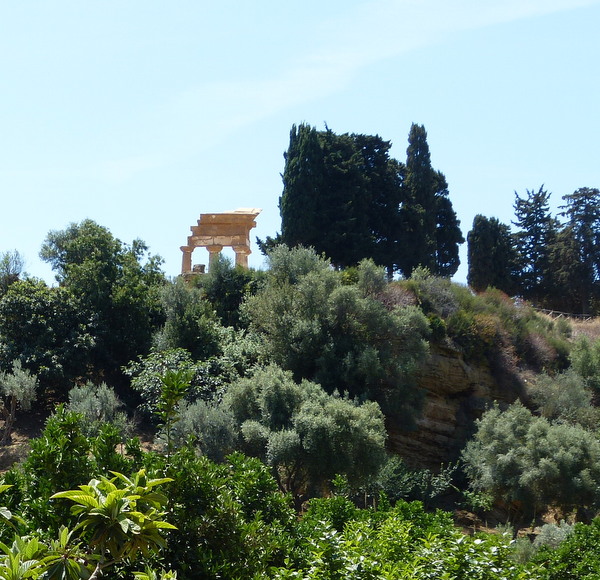 Thick growths of maquis, tough native shrubs and trees, carpets the steep hillsides of the garden.

The ruined remains of the Temple of Dioscuri beckoned above the maquis, reminding me that I must  make my way back through Kolymbetra’s cool and quiet pathways to rejoin my OAT traveling companions. Our meeting place was the Temple of Olympian Zeus,  its backdrop the modern-day city of Agrigento. 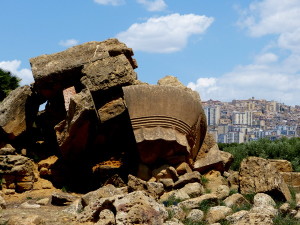 Temple of Zeus tumbled ruins with contemporary city of Agrigento in the background.

I could not help but feel pleased that those Carthaginian slaves, instead of completing the magnificent tumble we were standing before, had been put to work digging out a lake. Temples on the ridge fell into ruins with the passing centuries. During which the excavated site metamorphosed from lake to a garden, encompassing Sicilian history from ancient times to today.