The Gardens Below Prague Castle

The Gardens Below Prague Castle 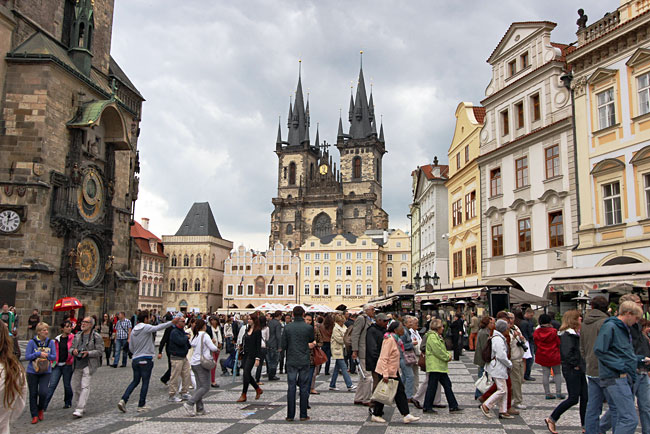 The tranquility of the Gardens Below Prague Castle seem a world away from the city’s tourist-packed Old Town Square.

CZECH REPUBLIC Prague – I’ve long thought that the best city transportation is a pair of comfortable shoes. That was certainly true of Prague, a most walkable city, allowing me to hotfoot it through its historic Old Town Square, pushing my way through pretzel hawkers and throngs following umbrella-toting tour guides and past bike bars pedal-powered by beer-guzzlers. I was on my way this May day to a Prague of serenity, the Gardens Below Prague Castle.

As I crossed the Vltava River via the Mánes bridge that connects Old Town with the Lesser Quarter (Malá Strana), on my far left the Charles Bridge looked as if it were crawling with an unending stream of ants, hordes of people making their way over what may well be the most tourist-packed bridge in the world. 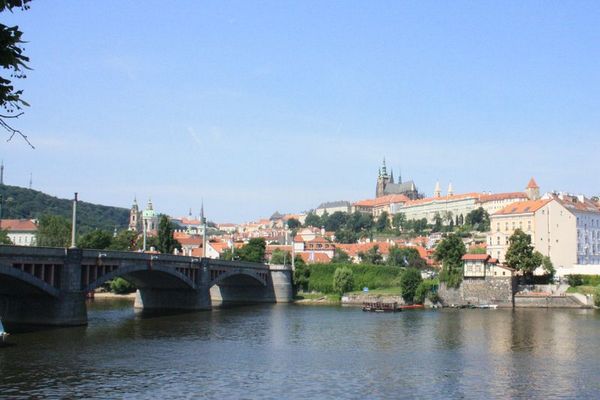 Once across the river, I walked straight ahead through the comparative calm of the Malostranska metro station and entered the lush, green tranquility of Wallenstein Gardens –  gardens to wander before making my way to the Gardens below Prague Castle, which I knew were somewhere nearby.

But first, the Wallenstein gardens … 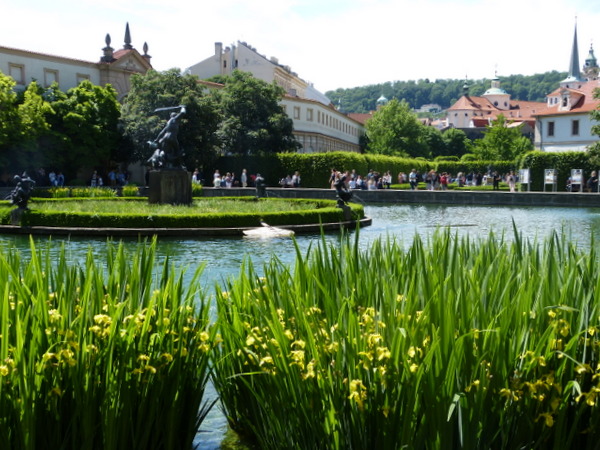 The Wallenstein Gardens were constructed in conjunction with the Wallenstein Palace, now home to the Czech Senate.  It was designed in 1623 for Albrecht von Wallenstein, who attained fame as a brutally successful general in the army of the Holy Roman Empire. Reportedly 26 houses, six gardens and two brickworks were razed to make way for his vast palace and surrounding gardens.

If I’d not been on my way to the Gardens Below Prague Castle, I could easily have spent more than a happy hour exploring the four, beautifully landscaped acres, enjoying the gardens’ resident peacocks, watching the ducks float by in the large pond with its marble centerpiece fountain featuring Hercules and the Naiads.

As I followed walkways edged with manicured hedges, I came across an aviary, and then an Italian grotto with artificial stalactites to finally emerge in the Sala Terrena, a gardened “room” where classical concerts and theater performances are frequently held.

Finding the Gardens Below Prague Castle …

Stepping through an arcade, I found myself on the street, where I knew in one direction or another the entrance to the Gardens below Prague Castle were located. Approaching a Senate guard, I showed him the address. With a smile, he pointed across the street where a pair of ornate iron gates were swung open. 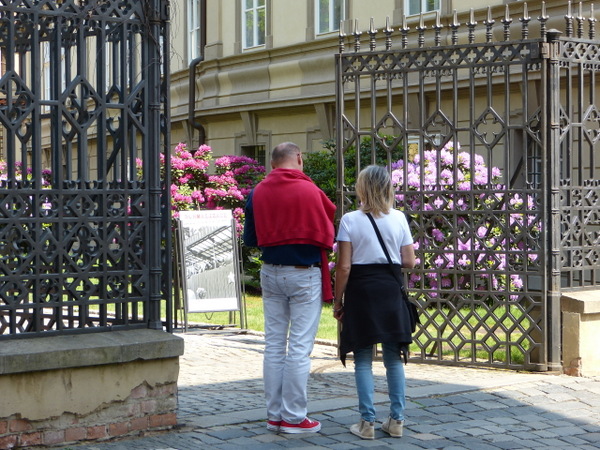 Prague Castle was heavily defended during the Middle Ages, with the south-facing steep hill supporting its imposing presence abristle with fortification. The beginning of the 16th century ushered in a period of peace, and terraced vineyards and Italian-style Renaissance gardens attached to palatial edifices gradually replaced demolished ramparts. 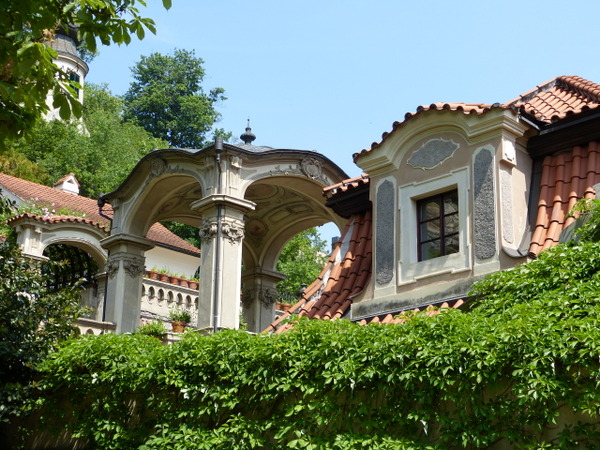 Like most private gardens, through the years they were subject to redesign, with the 18th century ushering in miniature versions of the grand Baroque gardens of that time. Like their grander counterparts they were created for show, with invited “audiences” completing what might be called a theatrical-horticultural performance dedicated to the importance of the garden’s owner.

Five interconnected gardens make up the complex: the Ledebour Garden, the Great and Small Pálfy Gardens, the Kolowrat Garden and the Small Fürstenberg  Garden, so named to reflect their original ownership. Between 1988 and 1999, extensive, one-by- one renovations rescued them from crumbling disrepair. In 1992 the Gardens below Prague Castle, along with the rest of the Historic Center of Prague,  was UNESCO World Heritage listed. 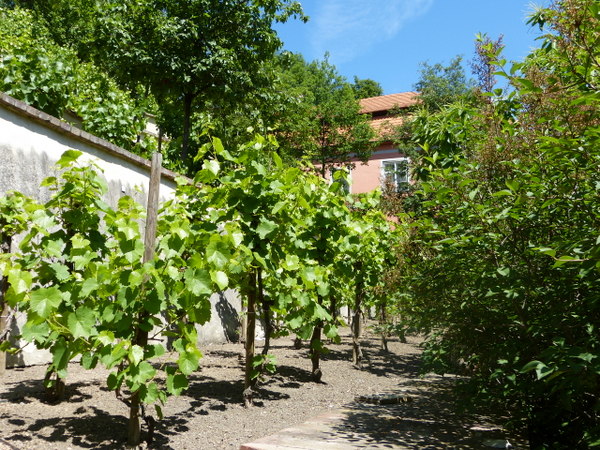 The iron gates on the street opened into the Ledebour Garden where rhododendrons as big as trees were in glorious full flower. A staircase took me to the terraced part of the garden where a sign indicated that a fee was charged if visitors wished to continue on.

Fee paid (100 CZK,or $4.50)  and armed with a self-guide brochure to the garden, I explored the series of palatial gardens via decorative, connective staircases with terrace plateaus unfolding on either side. Some contained small vineyards, fruit trees, herb gardens, formal parterres filled with flowers, a piece of sculpture, a pond, a fountain, a greenhouse … 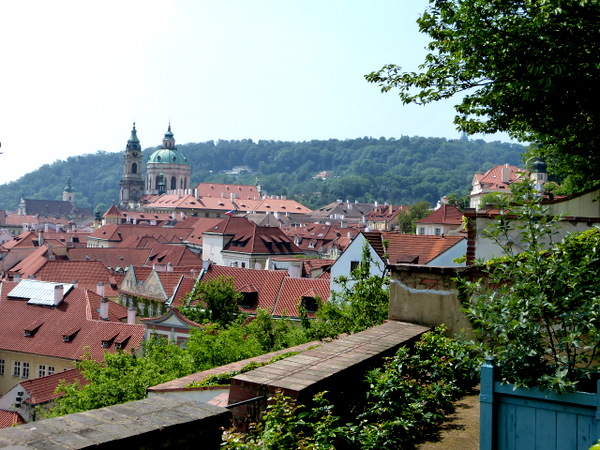 Gardened terraces afford breathtaking views of the red-roofed city below.

But given all that, and although my brochure told me that careful historical work preceded each restoration, I found a sense of sameness.  That was quickly forgiven, however, as I paused to take in breathtaking views of the red-roofed city stretched before me. A standout view was from the upper reaches of the folly-like Bellevue tower, located in the far eastern corner of the Lesser Fürstenberg  garden. 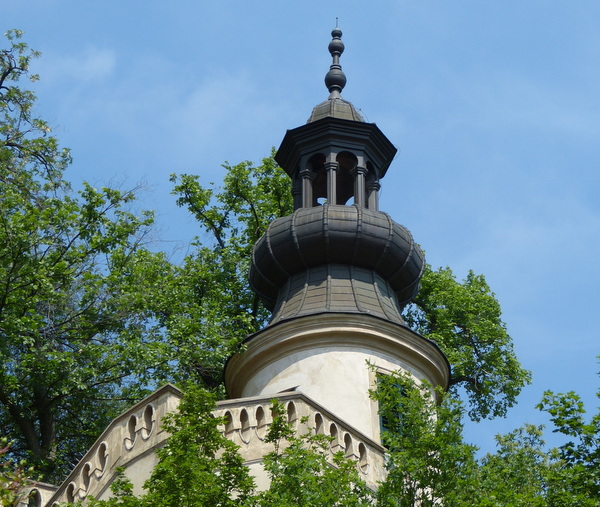 As I reached the uppermost terrace, it seemed logical that one should be able to exit directly into the castle grounds atop the hill. Not so. To do that, I returned to the street and continued a few steps to another wrought-iron gated entrance, this time to the Greater Fürstenberg  Garden, which for some unfathomable reason is not part of the Gardens Below Prague Castle complex but is divided by a wall that runs from the street level to the high terraces above.

On to the “Greater” garden …

The Greater Fürstenberg  Garden is greater indeed, encompassing the entire hillside from sidewalk to the castle grounds above. I followed a path edging its park-like lower level to a charming summerhouse where a dour woman in black grudgingly accepted my payment of the 50 CZK fee charged if one wished to enter. 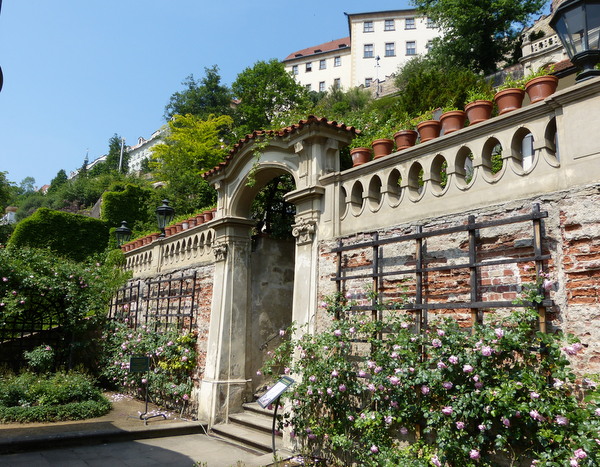 The Greater Fürstenberg Garden is greater indeed, stretching from sidewalk to Castle.

Laid out in the same fashion as those on the other side of the wall, here the terraces were more extensively gardened. My brochure told me to expect a planting of over 3,500 flowers, 8,500 trees and 2,200 roses. I was not disappointed.

Nearing the top, the short staircases between the terraces turned into a  zig-zag of  – my guess as I traversed them – some 200 steps to the exit on the castle-grounds. 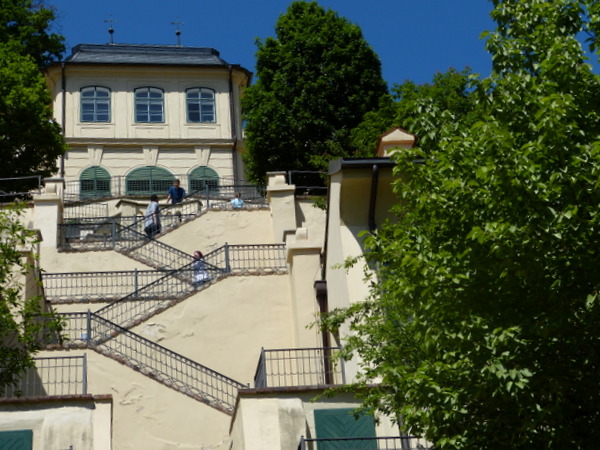 A zig-zag of uncounted steps leads to an entrance to the Prague Castle grounds.

With that, I wished my “best city transportation” good speed as I made my way through the hordes awaiting entrance to the castle. Most of whom, I’d venture to say, were completely unaware of the historic, gardened tranquility lying just below.