Garden an accessible work of art

Garden an accessible work of art 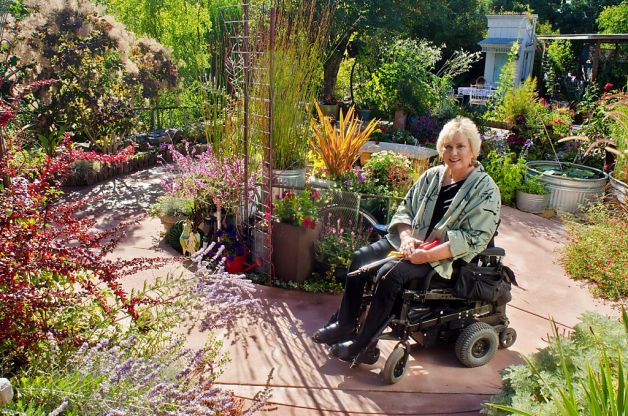 CALIFORNIA Sonoma County – Labyrinths are both  reassuring and mesmerizing.  Unlike a maze, there is no need to worry about finding a way out.  Enjoy the journey, let the mind wander while walking a circular path.  So it is in HolLynn D’Lil’s  labyrinth garden.

Carved from land between her  modest house and a creek, design and plantings of each loop honor in turn the body, mind and heart. All lead to the center spiral, which D’Lil likens to the inner ear. D’lil calls it her “listening-path labyrinth.”

The labyrinth-patterned garden has an important  second purpose:  It allows D’lil  to tend every portion of it from her wheelchair.

The “listening-path labyrinth” features a theme for each loop. (All photos:  Alvin Jornado, San Francisco Chronicle)

“I belong to a club that anyone can join at any time and unexpectedly,” she says. D’Lil joined the “club” as a fresh graduate of Texas A&M.  Driving home from a teaching job in 1967, an automobile accident left her a paraplegic.

About eight years later, the disability rights movement began to get under way. “By now, I had two grade-school children,” she says, “children that I could not take to the library or the movies for lack of access.” 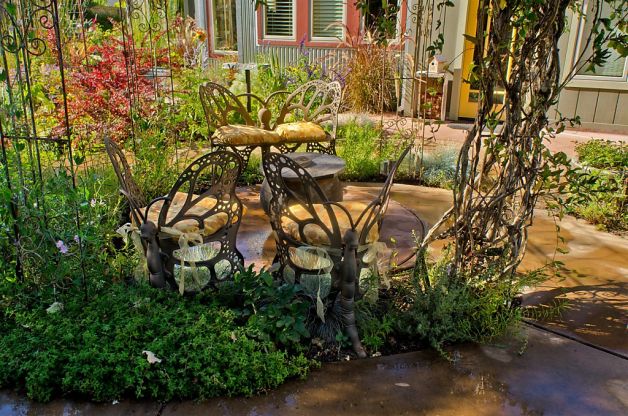 Butterfly chairs are featured in a seating area.

Her voice is heard …

Wanting to be heard, she became involved in the 1977 sit-in at San Francisco’s Federal Building to urge the Carter administration to implement Section 504, the model for the 1990 Americans with Disabilities Act. That put her on the path to more than 30 years as an advocate for accessibility. She spent 11 years as accessibility specialist for California’s Department of Rehabilitation, served on federal and state boards, consulted on codes and regulations, and presented hundreds of seminars throughout the state.

“One must listen in order to understand the diverse needs of the physically impaired and how best those needs can be addressed,” she says. 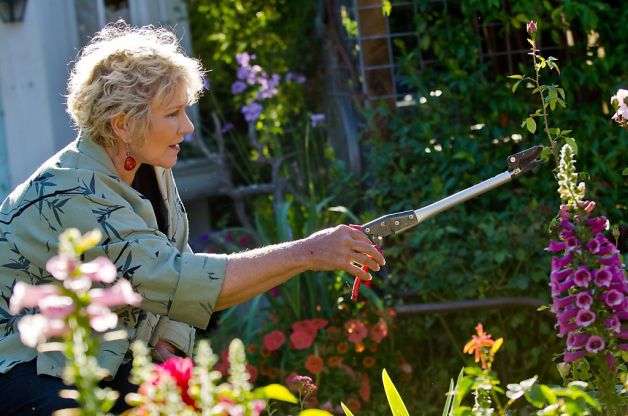 HolLynn D’Lil prunes her flowers with a long-handled gardening tool.

Needing a break from the demands of her work, D’Lil set out with a friend to explore the North Coast. The trip home took them through tiny Graton, where she was struck with its accessibility. “Shops, restaurants, sidewalks, there was nowhere I could not easily go,  she says. “Little Graton had it right.” Deciding she didn’t need to live in Sacramento to do what she did, she made the move.

Gardening as a connection …

Through her love of gardening, D’Li! quickly connected to her new community. She  served two terms as president of the Graton Community Club, which hosts its 94th Flower Show and Plant Sale this year and was instrumental in making Graton Green, a small park in the center of the hamlet, a  reality. 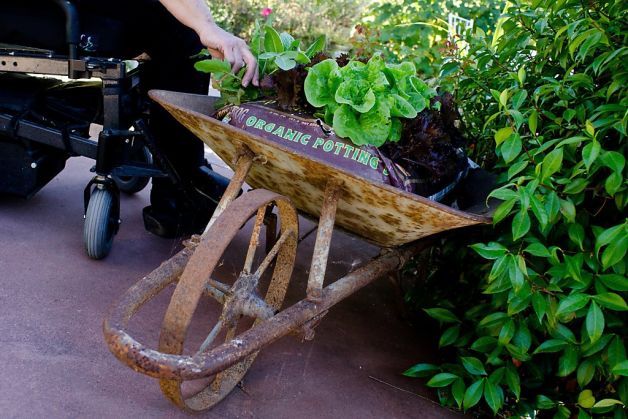 Lettuce is harvested out of a wheelbarrow. Runoff from the hard surfaces is diverted into an underground water-retention system that prevents overflow into the creek.

Charming touches are found throughout the garden: a heart -shaped red glass paperweight on a small bench in the “freeing of the heart” loop; an antique birdcage, dripping with potato vine; salvaged columns arranged like ruins at the back entrance.

When D’LiI asked her son if he’d build her a  tool shed resembling an outhouse, the result was a miniature, ornate Victorian that D’Lil  calls “the outpalace.” 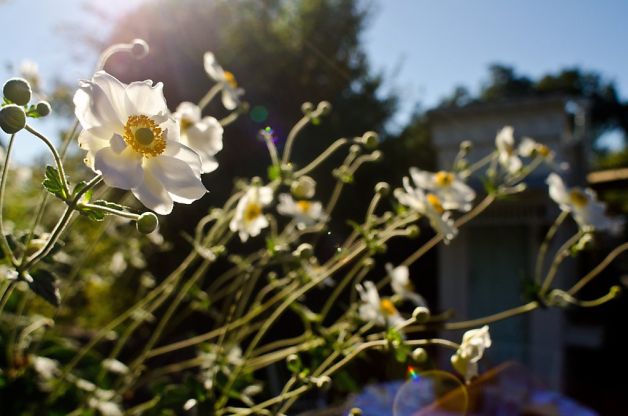 Ponds in galvanized livestock tanks provide D’Li! with a “big education about dragonflies” as she follows every step of their life cycle: mating, egg laying, nymphs attached to cattails growing in the ponds, and emergence as the “simply gorgeous” bright-orange flame skimmers.

“The garden is a constant wonder to me,” she says. “I never cease to be amazed. All it takes is sunlight, water and a little food, and it becomes a work of art. ”

D’Lil added footage to her small house so she could install windows to frame views of the garden, which is certified as a Habitat Garden by the National Wildlife Federation

D’Lil says of her garden, “Nothing about it shouts “accessibility.” It’s  something everyone can enjoy. As all places should be.”