ENGLAND Surrey – Every year, thousands of people from all over the world make their way to England’s Hampton Court Palace. So it has been since Queen Victoria threw open the palace’s gilded gates to the general public in 1838. Located on the banks of the River Thames, but a short train ride from central London, today’s visitors come to traipse through the 500 years of English history embedded in the some 1000-room royal abode.

Built by Cardinal Woolsey in the early 16th century, Hampton Court was proclaimed the finest, most flamboyant residence of the realm. England’s answer to France’s Versailles.

When the cardinal fell from grace, Hampton Court caught the attention of Henry VIII who brought the second of his two wives, Anne Boleyn, to the palace … and, in the years to come, his next four.

Following Henry VIII, a succession of royals marked their presence at Hampton Court by making changes to the palace itself and its surrounding 800 acres of gardens and parkland. Most notable were those of William III and Mary II, who favored baroque over Tudor and ordered the most extensive alterations to the grandiose edifice and its surrounding gardens.

Most visitors enter the gates and make a beeline for the estate’s magnificent sprawl of red-brick buildings. There, an entire day can be spent making one’s way through 500 years of English history, traipsing through royal apartments and great halls, admiring art galleries and furnishings along the way, before stepping into the culinary labyrinth of the palace’s Tudor kitchen where 200 cooks and their helpers produced over 800 meals a day to fuel Henry VIII’s hungry household. Other visitors, as was I, primarily come to immerse themselves in the playgrounds of those kings and queens, Hampton Court’s gardens.

A series of garden redos … 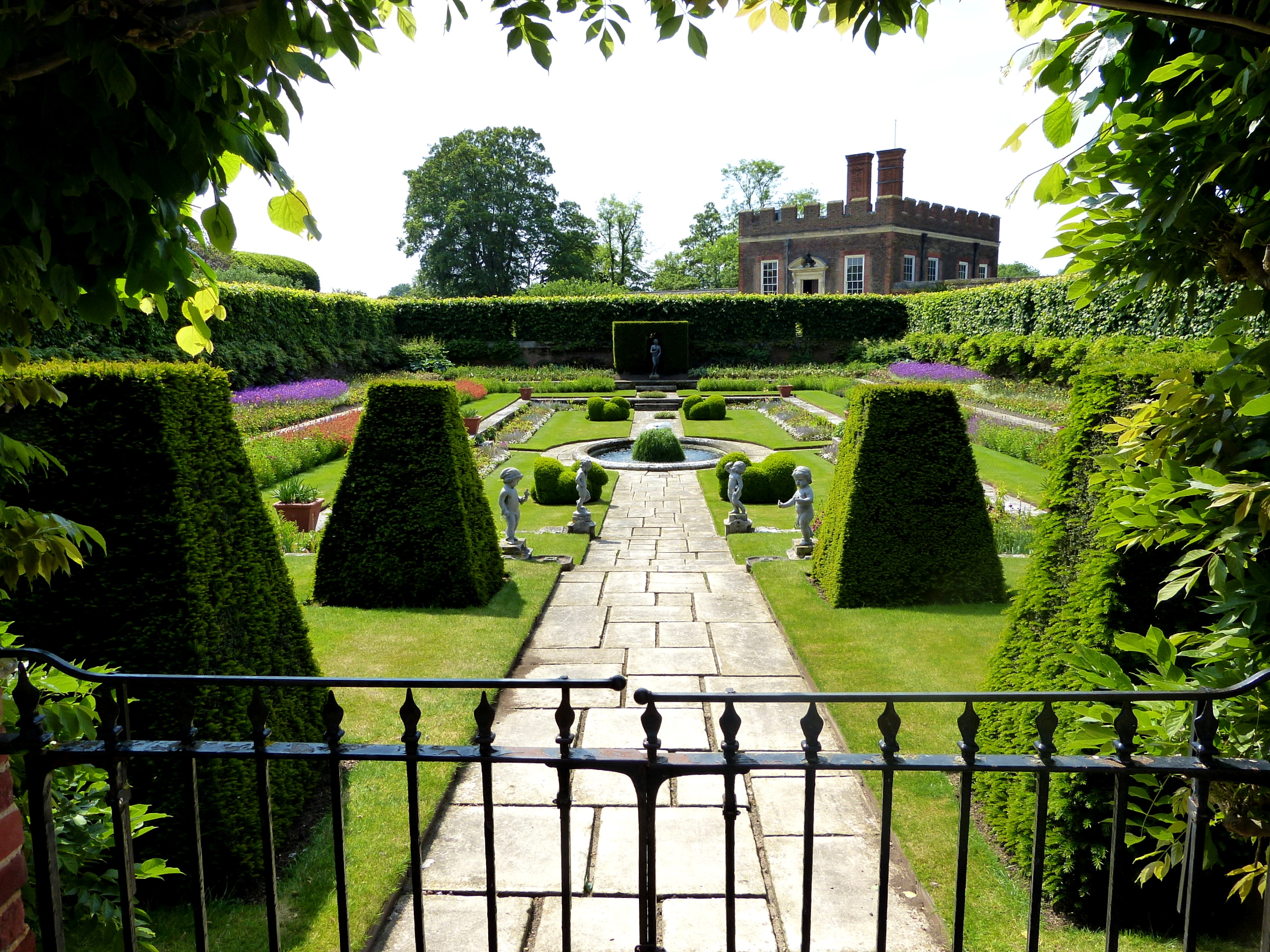 What is now known as the Pond Garden was a fish farm in medieval times.

Henry VIII strutted through the heraldic, Tudor-style Privy Garden designed for his quiet, exclusive use. Charles I, an art collector who stayed sporadically at Hampton Court following his ascendance to the crown in 1625, ordered the Privy Garden  reconstructed in an Italianate style, the better to display a collection of classical statues.

In 1701, William III and Mary II ordered it refurbished with elaborate baroque touches. Alas, William III didn’t live to enjoy the alterations.  In 1702, he fell from his horse and died. Visitors to the garden today see a 1995 reconstruction of the garden William III envisioned.

The Great Fountain Garden with its 13 fountains and radiating avenues of yew trees in the then fashionable form of a goose foot, was a William and Mary installation, to which Queen Victoria added splendid displays of massed flowers.

The Pond Garden was once a medieval fish farm. Drained, it sheltered tender, exotic plants collected from all over the world for Mary II.

On to the Kitchen Garden …

And on it went, with on-going small and large changes throughout the estate’s sweeping landscapes and intimate walled gardens. Including my Hampton Court favorite, the Kitchen Garden, which remains, as it was through centuries past, the most active of all the palace’s gardens producing fruits and vegetables throughout the entire year. 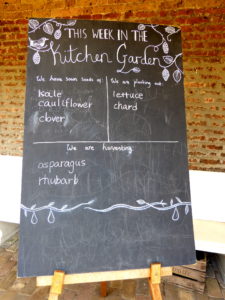 Today, it is about one-sixth of its original size.  In the early 20th century,  a large portion of the space was turned into a rose garden, filled with old English scented varieties. Later, hybrid roses were introduced, with the garden taking on its current geometric styling. 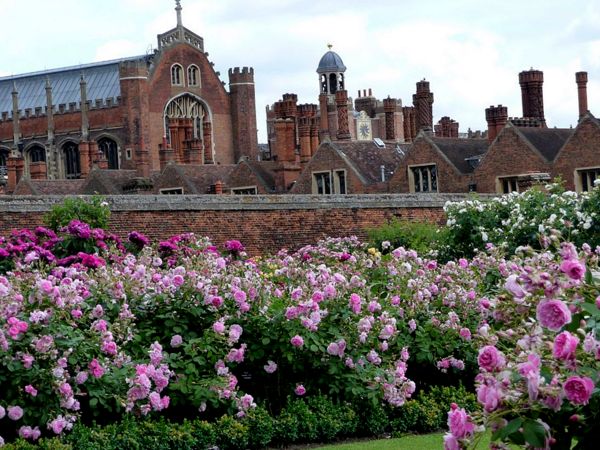 The palace’s magnificent sprawl of red-brick buildings can be seen beyond the Rose Garden’s wall.

In the palace’s royal heyday, dozens of gardeners supplied the court with fresh fruit, herbs and vegetables the year around. Today, but a team of three gardeners and seven regular volunteers work regularly in the Kitchen Garden, amplified by a team of schoolkids on the day of my visit carefully planting seedlings under the watchful eye of a garden volunteer. 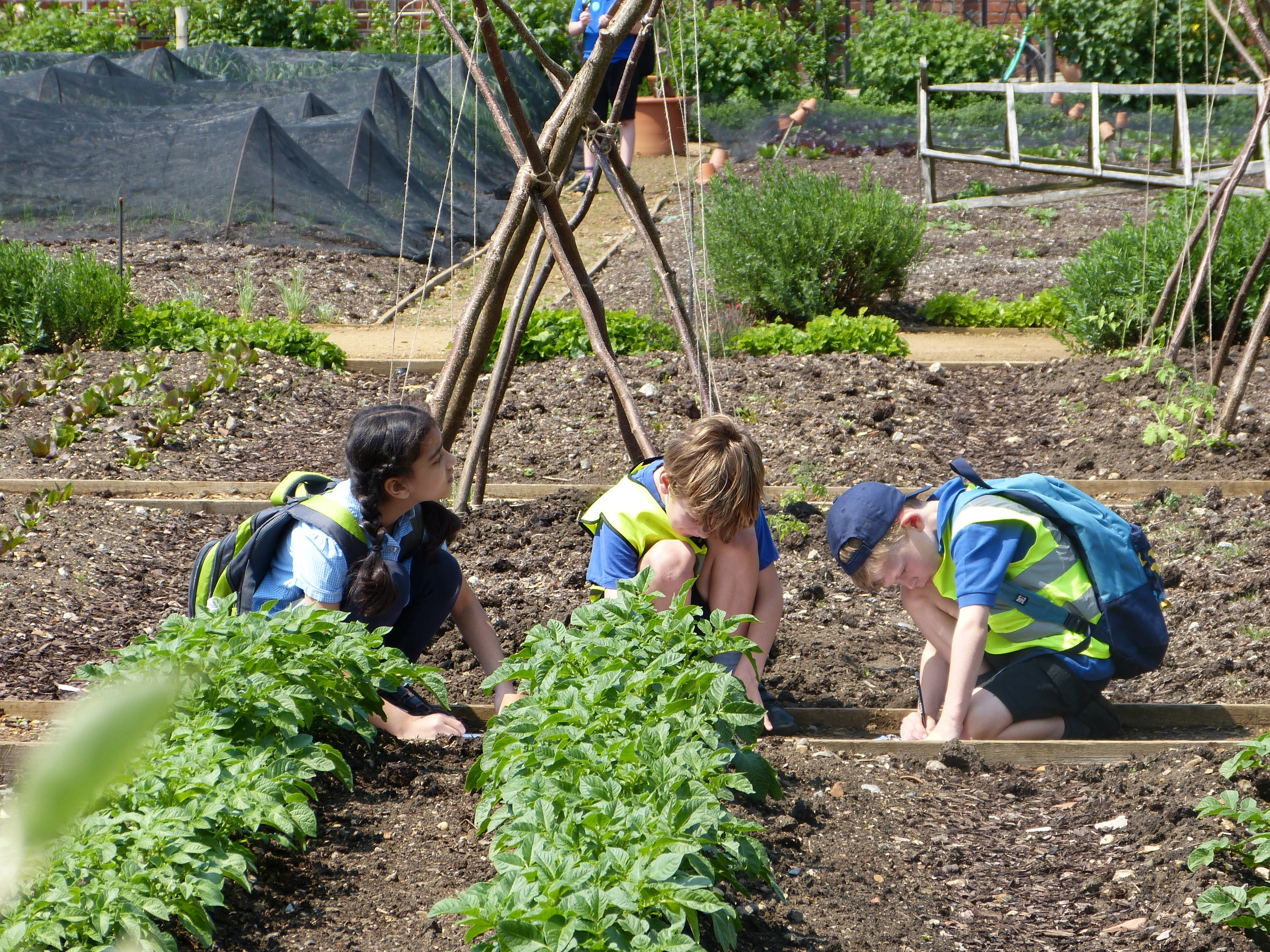 Although it’s but a fraction of its original size, a total of 254 beds receive plants and seedlings plotted to provide a variety of fresh produce throughout the year. Asparagus and rhubarb, cabbage, courgette and squash, lettuces, peppers, chard, leek, Brussels sprouts and celeriac, and more. Fruit trees espaliered along the garden walls supply nectarines, plums, apricots and peaches.

In the spring, produce from the garden begins to appear for sale in the gift shop.  As the garden moves into seasonal abundance, an every-Tuesday market stall is set up in the garden that continues into December. A special team of harvesting and selling volunteers arrive to assist the regular gardeners in readying the garden’s bounty for the wildly popular weekly sales. 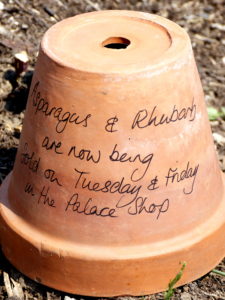 How I wished that my visit had coincided with a Tuesday, and that I was a local carrying a market basket to fill at the Kitchen Garden stall. Special it would be, if one were to walk out through the gilded gates of Hampton Court Palace carrying a week’s supply of produce fit for a king.

Tip: For those wishing to view the gardens only, there is no charge to do so before the palace officially opens at 10 a.m. Hampton Court Palace, East Molesey, Surrey, KT89AU