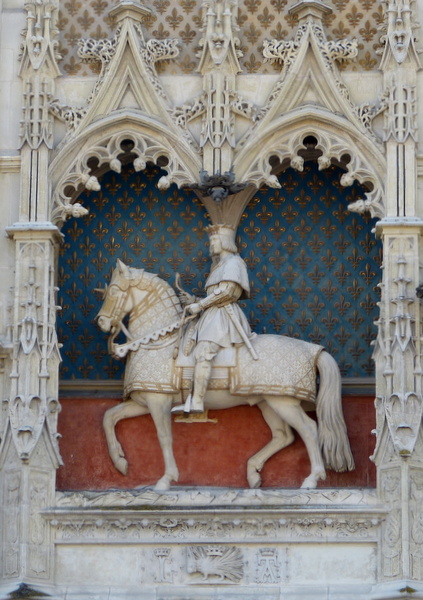 FRANCE- Amboise. How many historic, over-the-top, Loire architectural monuments to money and power can one ooh and aah over before chateau fatigue settles in? I knew I’d reached my limit before I boarded the train at Blois station bound for Amboise.

It was nearing the end of my Loire Valley stay of a month-and-a-half, headquartering at Blois, the once powerful city of medieval counts. The  reason for my stay was to improve my French via self-imposed immersion  and, while doing so, sally forth into the fabled countryside. 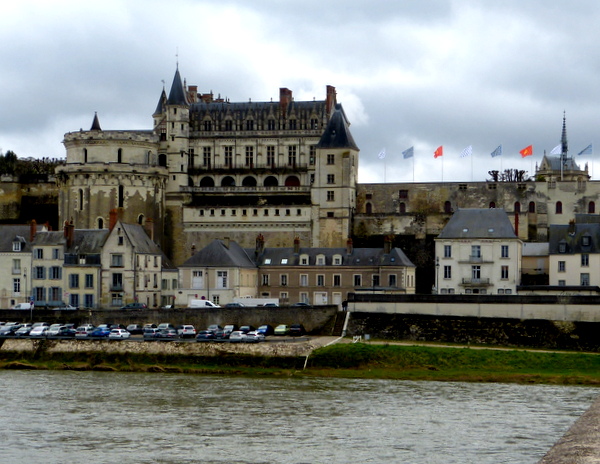 In addition to visiting Blois’ imposing royal chateau, sitting smack-dab centre ville, my teeny and tinny, green, rental Fiat had already taken me to six other grand chateaux, plus several lesser ones. So it was that I’d already decided as I walked from Amboise railroad station into town, crossing the Loire on the bridge that straddles the river, that I’d skip Amboise’s royal chateau glowering from high on the bluff straight ahead.

My destination was Clos Lucé, a small chateau built of pink brick and tufa stone. Here Leonardo da Vinci spent the last three years of his life, dying there in 1519 at the age of 67. 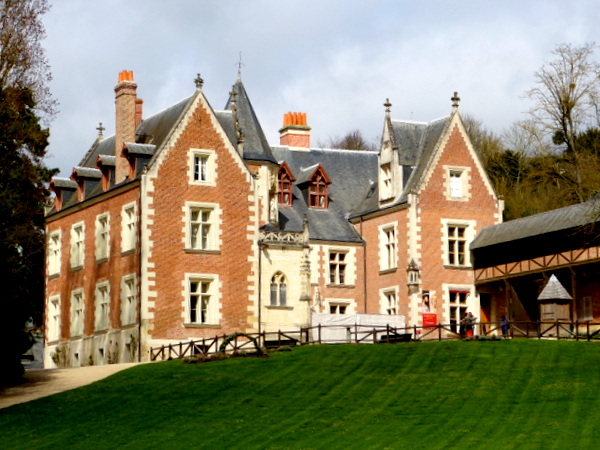 The tufa stone and pink brick chateau in which Francis I installed Leonardo da Vinci.

He’d come to Amboise at the beckon of King Francis I, Amboise chateau’s then owner, carrying with him from Milan his unfinished “Mona Lisa”, “Saint John the Baptist,” and “ Virgin and Child with Saint Anne.” Francis appointed Leonardo “First Painter, Architect and Engineer” and, along with the chateau, provided him with a hefty allowance. All he asked in return was that they spend time talking every day – which they did. So that neither king or Leonardo would have to brave inclement weather for their daily conversations, a 400 meter tunnel was constructed between royal chateau and Clos Lucé.

My ticket at Clos Lucé’s entrance gave access to both the house and surrounding garden. I headed directly to the garden . 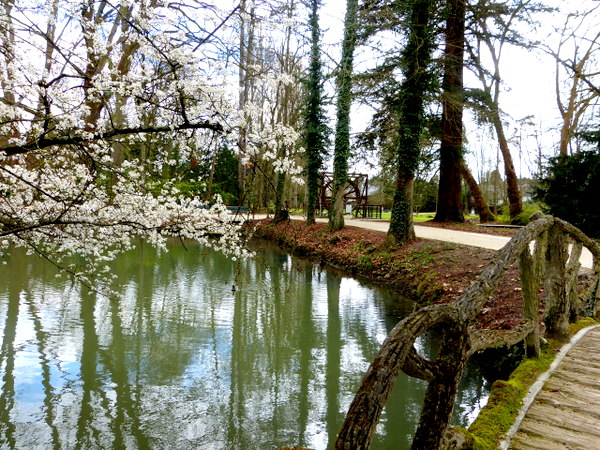 As I wandered the path into the heart of the 15-acre, park-like area below the chateau, it became evident that the sweep of woodlands and water that greeted me was less about shrubs, flowers and trees than the Renaissance genius who lived in the pink-brick, tufa-stone edifice. Following paths through woodlands, past ponds, and crossing rustling streams on rustic bridges I came across the haunting sight of some forty translucent canvases – for the most part faces taken from Leonardo’s most famous works – suspended in the trees . 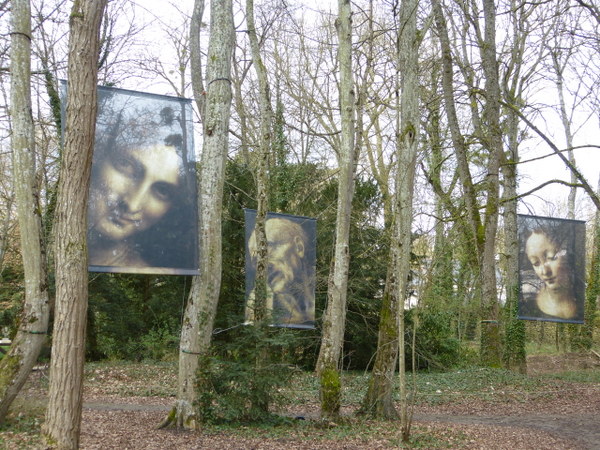 Faces from some of  da Vinci’s most famous paintings hauntingly hang in the trees.

Appearing like pieces of sculpture along the way were twenty, full-sized, interactive reproductions of his inventions – helicopter, fan-type machine gun, armored tank , swing bridge, a variety of wheels and sluices to harness water. Had it been later in the season, I could have made my way around the garden’s ponds in a Leonardo-designed paddle boat. 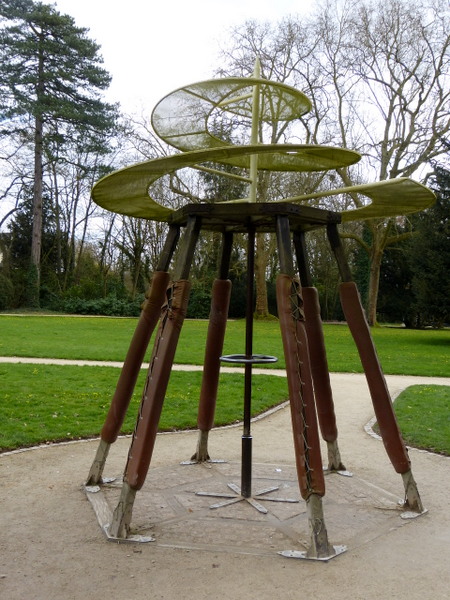 Da Vinci’s inventions are presented as sculptures.  Here, his helicopter.

Da Vinci as gardener and botanist …

I crossed the swing bridge and followed the path to Leonardo’s Garden, an area inspired by the more than 100 sketches and descriptions of plants found in his notebooks, in which he, a keen gardener, started to list their features and major attributes. It is said that had he not abandoned this aspect of his life he could have been a big jump ahead of 18th-century Carl Linneaus, considered to be the father of modern botany.

But Leonardo had other things on his active mind, among them, surprisingly, party planner. To thank Francis I for his generosity, Leonardo threw a grand party at his pink- brick, mini-chateau. He draped its courtyard in sky-blue cloth and on it portrayed the stars, planets and moon. How I would have loved to have been among the invited guests! 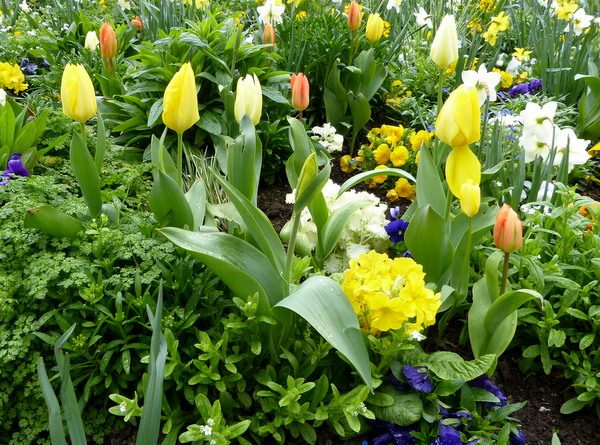 Leonardo’s small chateau, which I did visit after walking the gardens, is restored as it would have been during his stay. Not to be missed is the basement permanent exhibition of 40 of his most famous inventions, the models recreated by IBM. The chateau’s rear door opens to a gardened terrace where there is a delightful café with both indoor and outdoor seating.

Clos Lucé is open year round, except December 25 and January 1. Opening times vary according to season, but are, in general, 9 am – 7 pm. Ticket office closes one hour before site closure.