Eglin happily admits to a passionate love affair with roses.  “they come in many colors, blossom in many shapes, and are imbued with a history that dates back through the ages,” he says. “The more I began to learn about them, the more important they became to my gardening life.”

Given that, it is no wonder that roses enter Eglin’s who-dunnit imagination. In his latest novel, number six in his series of English Garden Mysteries, the plot deepens as Eglin’s botanist-sleuth Lawrence Kingston dodges pruning shears and bullets in a fog of deadly duplicity centered on the mystery of how an English rose thought long extinct found its way to a remote corner of  the Rock. 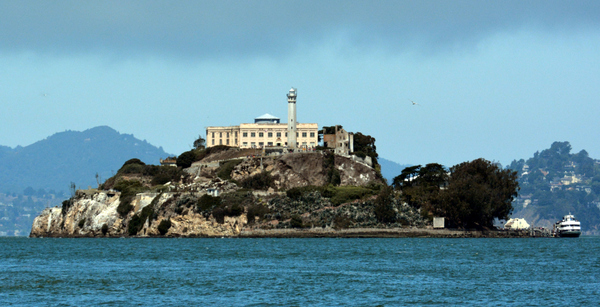 A rose, considered long extinct, is found in an abandoned Alcatraz garden.

Titled, “The Alcatraz Rose,” it comes full circle on the rose theme to his first in Eglin’s series, “The Blue Rose.” While the stories follow different twists and turns, both are firmly rooted in rose horticultural reality. “Fact blurred with fiction,” Eglin calls it. 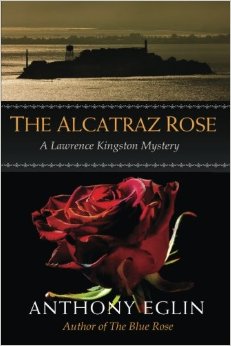 Mystery based in fact…

“The Alcatraz Rose,” is based on a 1989 visit to Alcatraz Island by a group of Bay-area rose aficionados that included George Lowery, a Sebastopol heritage rose cultivator. Lowery spotted a deep-red rose struggling through  brambles behind the house by the first warden of Alcatraz, James Johnston, who was known to have loved roses. Lowery took  cuttings to propagate and, with research, identified it as a ‘Bardou Job,’ among the rarest of about 100,000 known rose varieties.

Although an enthusiastic gardener, today, the British-born Eglin remained ambivalent “to the hands in the soil sort of thing,” as he puts it, for many years.

That changed when a flood hit the Marin county town where he lived, destroying his “postage stamp-sized, miserable excuse of a garden.” When the water subsided, he stuck in a few culinary herbs. One herb led to another until the tiny area was completely carpeted in green, inspiring him to add a rose for a bit of “up and color.” 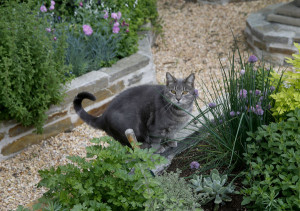 The Eglin family cat makes a stop at the herb garden.

One rose led to another and another ….

That led to another rose and then another, so many that his wife began to complain that he’d taken on a second job – deadheading – in addition to the San Francisco advertising firm that carried his name. In 1995, Garden Design magazine honored his now lushly landscaped postage stamp with its Golden Trowel Award for best rose garden.

Eglin’s Sonoma garden is quite different from his Marin garden. Not only is it much larger, at one-third acre, but is Mediterranean in its geometrical design, with decomposed granite paths, raised beds edged in stone, pots planted with sculpted greenery. Roses, however, remain the stars. 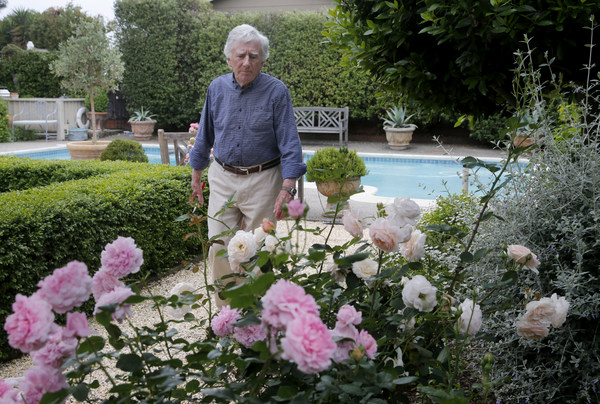 At a time when drought-resistant California native plants, not roses, are high on gardeners’ radars, Eglin says “It boils down to choosing the right kind.  Many of today’s roses are disease resistant and require no special treatment beyond minimal regular watering, occasional feeding and annual pruning.

Given that, it’s no mystery as to why his Sonoma garden remains a showcase of roses – rambling, climbing, billowing, brightening the garden with color, whiffing it with fragrance. 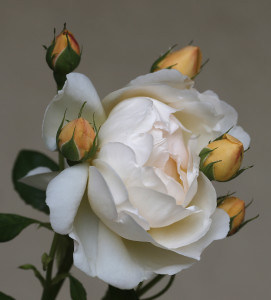