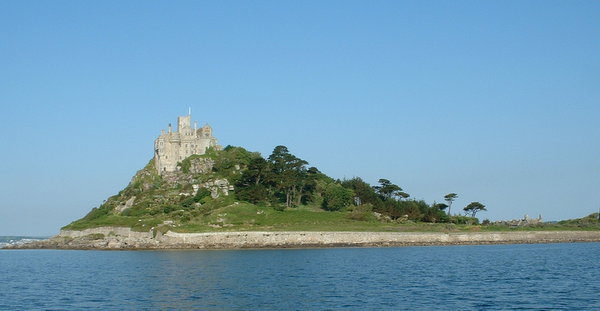 ENGLAND Cornwall – If the tide is out, you can walk a quarter-mile cobblestone causeway to St. Michael’s Mount.  Don’t worry if you linger on your tour of the castellated mansion atop this tidal island, a mirror image of Normandy’s famed Mont-St-Michel directly across the English Channel. When the tide comes rushing in, a motorboat ferry will carry you back.

Most visitors travel to the island for the sole purpose of wandering the public, grand rooms of the castle, owned and continuously lived in by members of the St. Aubyn family since 1646. 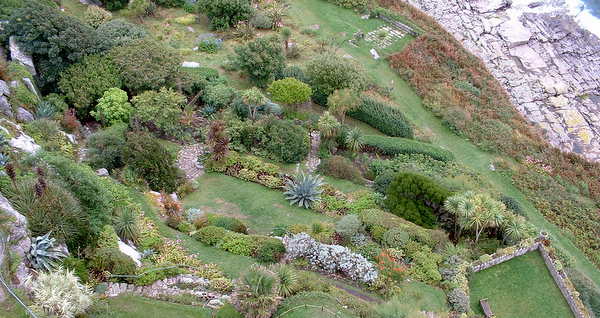 Cook finds it interesting that while the castle on “the Mont” is one of England’s best-known National Trust properties, the existence of the island’s unique and dramatic garden remains a surprise. 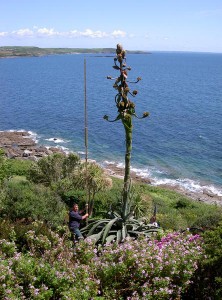 Through the years, some 50 terraces have found niches in the near-vertical, 200-foot-high granite face on the island’s south side. So steep is the garden that gardeners — of which there are four — abseil from one level to another working in teams of three.

“Everything we do is with ropes on, in full harness, with special fixings hidden in the rocks,” Cook said. “We take our time. A misstep means you could fall out of the garden.”

Gardens of one sort or another have been tended on the island throughout its long history. Cook has found remnants of culinary and medicinal herbs introduced when the island was home to a fortified Benedictine monastery.

Established in the 11th century, it was dissolved by Henry V in 1535.

Some 250 years later, Colonel John St. Aubyn purchased the island. Soon after, the first terraced gardens appeared. In 1780, the daughters of the fourth Sir John St. Aubyn created gardens curved and lined with brick, the better to capture heat from the sun. Peaches, nectarines, plums and strawberries flourished.

Terraces on either side were added in the 1870s and 1880s as the gardens entered what Cook refers to as “the grand time for plant collectors,” the Victorian era.

The Victorian era, a grand time for plant collectors …

“It was an era of expanding worldwide communication,” he explained. “Ships sailed the seven seas on trading dispatch from the Crown. They began to bring back completely unknown plants and seeds, the more exotic the better.”  Estates vied to outdo each other, pushing the boundaries of what could be grown where. Fortunes were paid to obtain the horticulturally weird and wonderful. 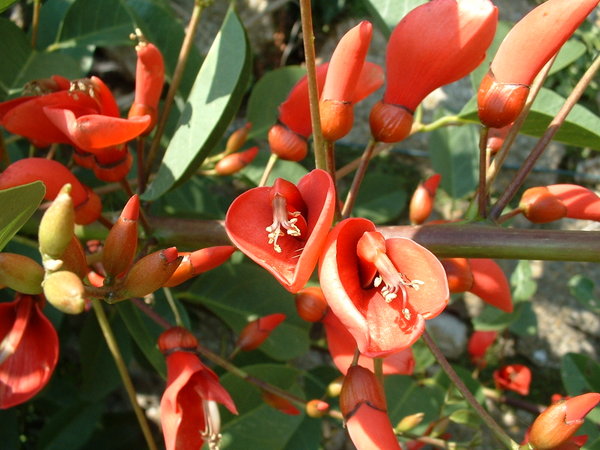 St. Michael’s Mount enjoyed enviable gardening conditions. “South facing and warmed by the Gulf Stream, its granite expanses absorbed the warmth of the sun during the day and released heat during the night,” Cook explained. “Perfect growing conditions for a variety of delicate species!” Palms, succulents, citrus, lilies. . . . For more than a century, it appeared that anything planted on St. Michael’s Mount would flourish. 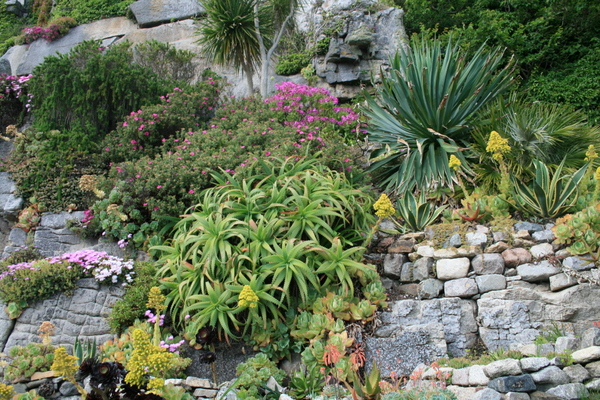 “And then came the disastrous winter of 2009,” Cook related. “Half of our succulents along with a host of other tender plants were gone.” Replacement went underway.

“And then came 2010 — another disastrous winter. Electricity failed in the greenhouse. All was lost. 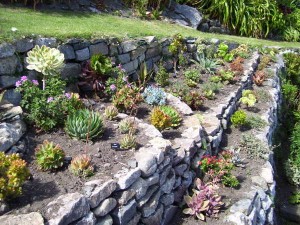 It was heartbreaking to find plants grown from seed, nurtured, trained and fed dead in an instant. After years of thinking we could grow everything, nature said, ‘No, you can’t’.”

While tender exotics continue to be tended, plantings today must answer questions of hardiness, salt and wind resistance, and ability to be propagated. “The estate couldn’t afford to keep planting over and over again,” Cook said.

As we talked the thought occurred that the Mount is basically a huge granite rock surrounded by water. I wondered, ‘How did planting soil get here? Did Victorian gardeners abseil down its face carrying bags and buckets of imported dirt to pack into crevices?’

“No need to,” Cook told me. “Wonderful soil has always been here.”

The reason? St. Michael’s Mount has not always had its feet in the sea. Centuries ago it was an enormous chunk of rock situated some six miles inland. Then came the great flood; radiocarbon-dating establishes its happening at about 1700 BC.

“For some 6,000 years, the Mount was in the middle of the forest,” Cook said. “Leaves fell from the trees, humus developed, birds and worms went about their work. When the rock in the forest became an island in the ocean, it remained insular, giving us wonderful soil — virgin gardening material. 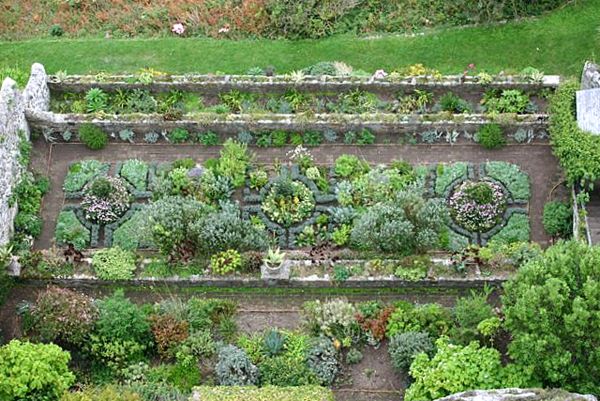 “The result is that we enjoy today an incredible garden, on an island, in one of the prettiest bays in the world. I could never imagine tending plants anywhere else. Where would I go? By contrast, any other garden, any kind of garden, no matter where in the world, would be, well, tame.”

Cornwall’s St. Michael’s Mount is located east of Penzance, at Marazion. The castle is open 10:30 a.m. to 5 p.m. daily, except Saturdays, mid April through September. Gardens are available for touring during castle hours Monday to Friday through June and then Thursday and Friday until the end of September. Admission is charged.  Visitors to the garden do not have to abseil between the terraces; rock stairs wind between many of them, and coastal views along the way are spectacular. Footing is uneven, and handrails are not always available; sturdy shoes are essential. Contact St. Michael’s Mount (Manor Office, Marazion, Cornwall, TR17 0EF, U.K.; phone 01736 710507, www.stmichaelsmount.co.uk; for tide and ferry information, phone 01736 710265). ITN