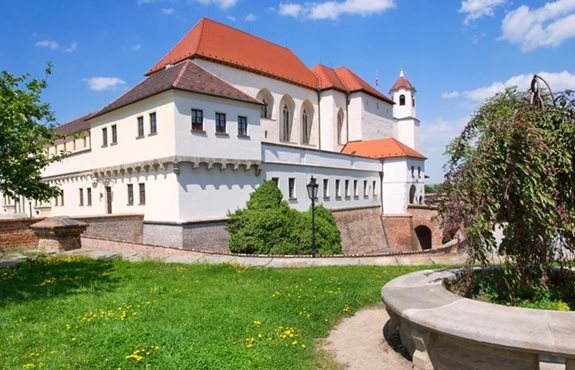 CZECH REPUBLIC Brno – Think Czech Republic and Prague springs to mind, everyone’s mind, as elbow-to-elbow encounters in the city’s picturesque old town attests. Mention Brno and the reaction is likely to be a scratching of the head. Brno definitely does not spring to mind.

An exciting place to design and build … 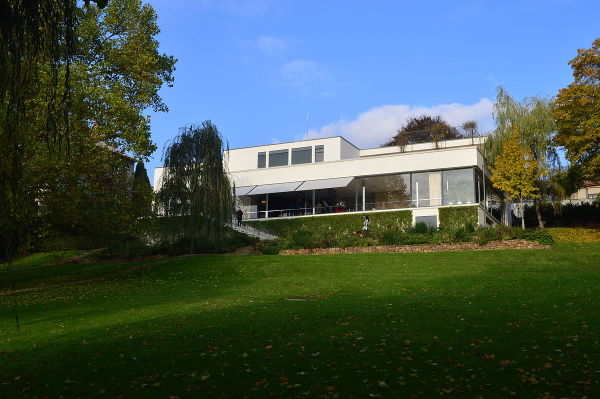 Villa Tugendhat is but one remarkable example of Functionalist architecture to be found throughout the city.

Architecture is a Brno treasure, with Mies van der Rohe’s 1930-era Villa Tugendhat UNESCO-listed. Wander about, however, and you’ll come across hundreds of remarkable buildings in the architectural format of Tugendhat’s clean, modern, Functionalist, “form follows function,” design – even the tram station! All came about during a 20-year period following World War I when Brno, historical capital of Moravia, stood center stage as one of the Continent’s most exciting place to design and build. 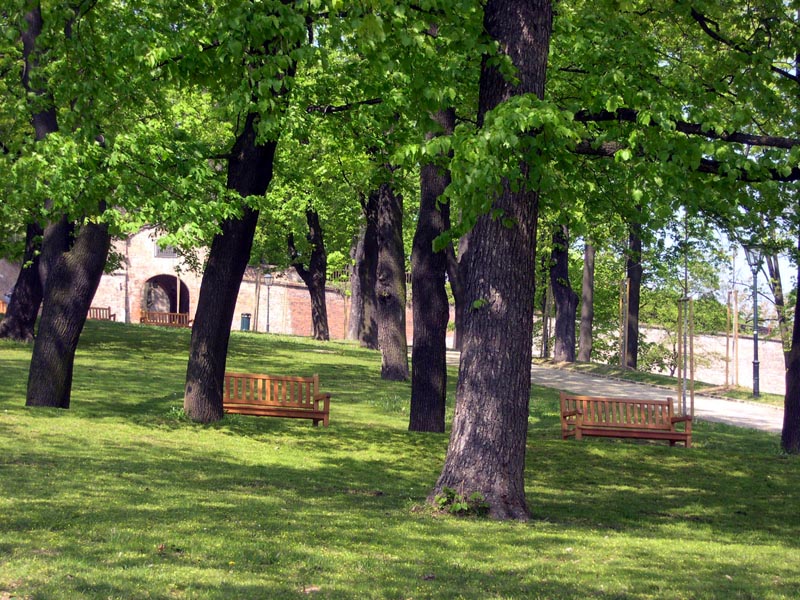 Walk a path downhill through the castle’s park to find a side entrance to the Open Garden.

Like Prague, Brno claims a city-center castle on its highest hill. Below the castle, shaded paths crisscross through a park of age-old trees with views of the city at every turn. Toward the bottom of the hill, the site of a former monastery, a path leads into quite a different garden, one as excitingly forward thinking as Brno’s “form follows function” architecture in its day. The Open Garden. 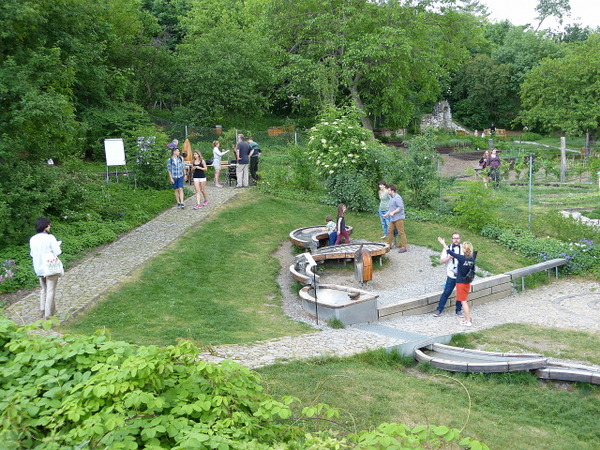 The Open Garden provides a welcoming place for family outings while serving as an environmental education center.

The Open Garden’s sole purpose is to inspire and enable protection of the environment while providing an open space for one and all to enjoy. In doing so, it comes under the umbrella of Nadace Partnerstvi, Environmental Partnership Association, EPA, with affiliated foundations in Bulgaria, Hungary, Romania and Slovakia. In the past two decades, EPA has partnered with 2,722 projects in the Czech Republic alone.

Since 2012, EPA has headquartered in a newly constructed, zero-carbon, completely passive building  that serves as an educational center for children and adults . The following year, on the two-and-a-half acres surrounding the educational center, the Open Garden welcomed its first visitors. 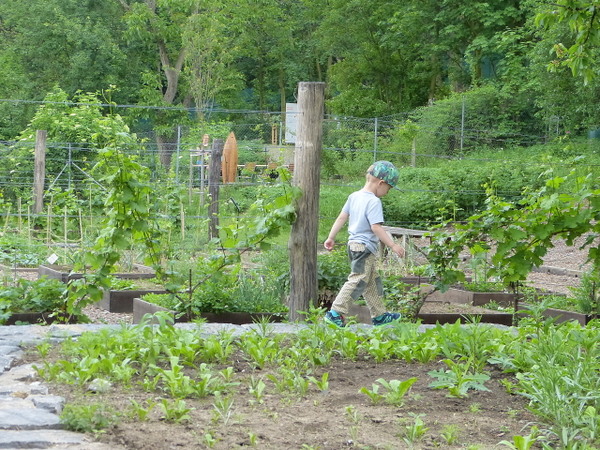 A child explore paths around allotment gardens made available to Brno residents.

The garden was a lively family place on the day of my late May, blue sky, puffy-cloud visit. With map in hand, I entered the Playful Garden with its twelve interactive stops focusing on four elements of nature: Sun, Air, Water, Earth. A question is posed at each of the twelve stops, followed by an activity that illustrates the answer. 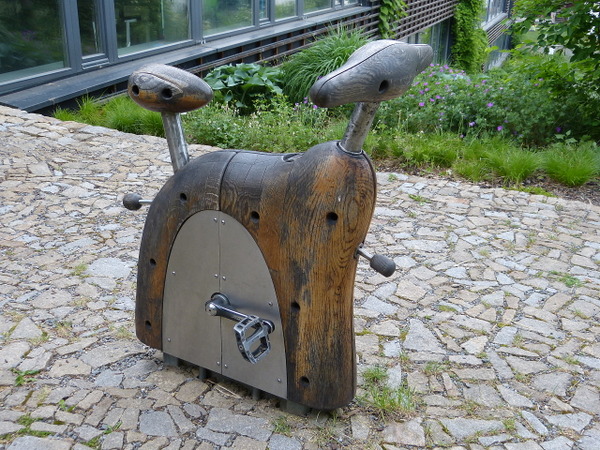 Pedal this playful bike sculpture to discover how much effort it takes to generate wind.

In Sun, I angled mirrors until finding the correct angle to find what happens when a path of light strikes the leaves of green plants. At a station in Air, while pedaling a bicycle I found how much effort it takes to generate wind. I watched kids in Water as they manipulated a river landscape by using a pump, letting water out of a dam, rerouting conduits. Earth posed among its thought -provoking questions, what is soil and where does it come from?

Next to Earth, I stopped to take in an example of what the garden calls “four-field farming system,” the practice of rotating crops to avoid soil nutrient depletion. 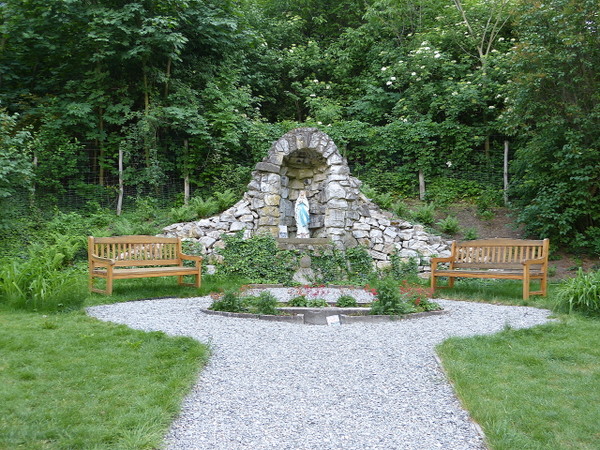 A shrine is all that remains of a Sisters of Borromeo  1875 monastery destroyed in World War II bombings.

Farther along, the Borromeo Garden invited quiet reflection. Named for the Sisters of Borromeo the garden is lovingly landscaped in the spirit of the sisters’ 1875 monastery garden that flourished here for decades supplying food and respite for the sisters’ school for girls and home for the elderly.

World War II bombings destroyed the monastery, leaving the shrine intact that today centers the Borromeo Garden. Following the war, Soviet occupation of Czechoslovakia expelled the sisters from their property; with repartition it was returned. Today , it is rented by the sisters to the ETA and Open Garden for one Czech crown a year . 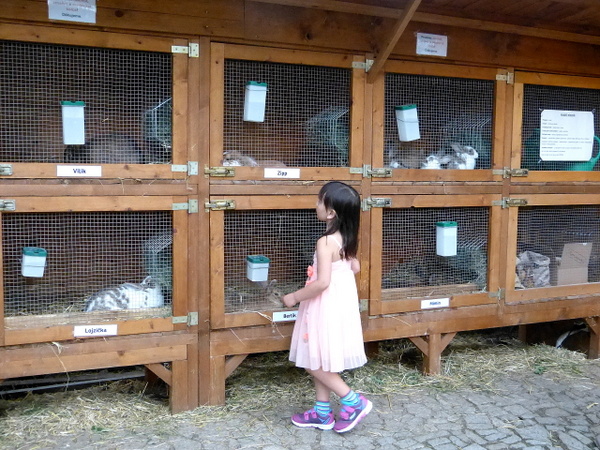 At every turn the garden provides environmental activities – including interaction with farm animals.

As I continued to explore the acreage, I came across other areas fulfilling the sisters’ rental proviso that the garden must benefit families.

Twenty, small, allotment gardens are made available for Brno residents to rent, one of whom was tending his tomato plants In anticipation of summer harvesting. Another area was devoted to farm animals – rabbits, poultry, sheep. 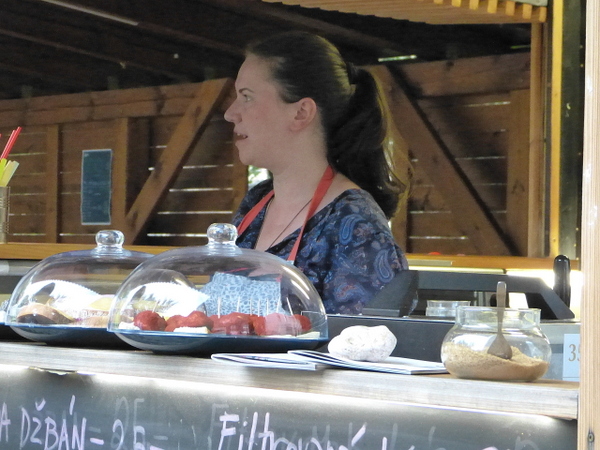 Take a break, or end your garden explorations with a visit to the garden’s café.

A café with an outdoor seating area offered healthy food, making a visit to the garden a complete “seed to feed” experience with the opportunity to mingle with the local population added in. All to be had in the charming downtown center of the Czech Republic’s second largest city.

The Open Garden is open Monday – Friday from 8 am to 6 pm; Saturday and Sunday, 10 am to 6pm. From time to time the garden may be closed for a special event. No admission charge, but voluntary contributions are welcomed. In addition to the entrance from the castle’s park land, another entrance is from 33 Udolni Street. E-mail contact, [email protected]; phone +420 778 436 469.